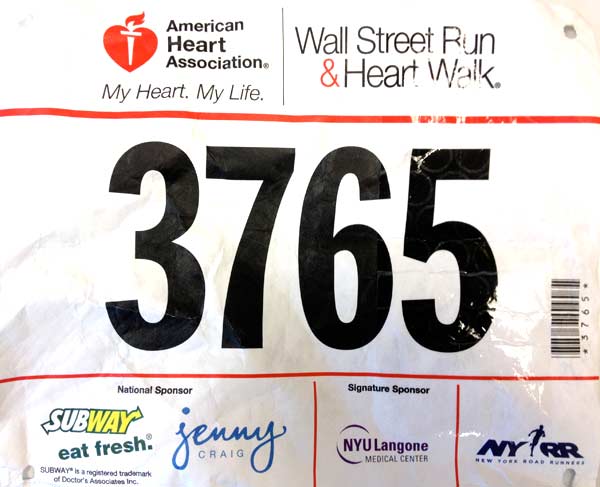 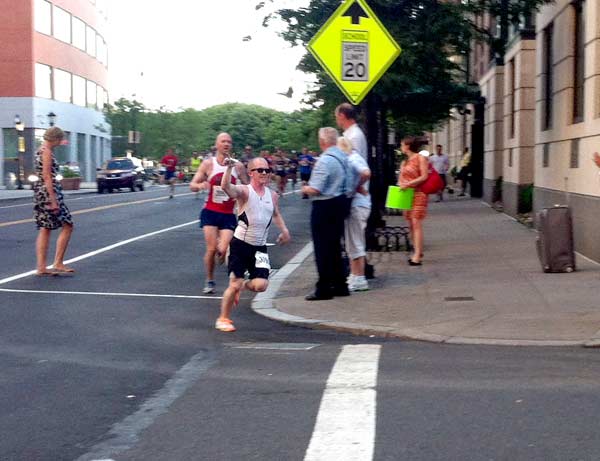 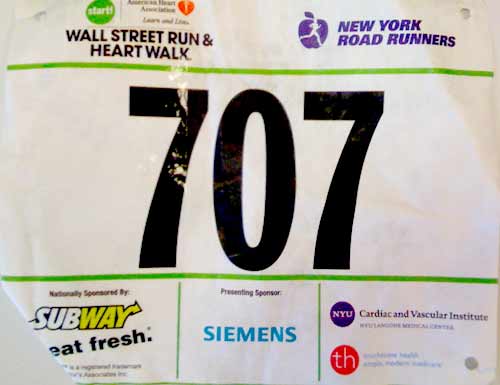 The AHA Wall Street Run takes place in lower Manhattan’s Financial District and is pretty much organized chaos. The 3 Mile course runs a maze-like route through all the narrow roadways, finally ending at the ever-so-familiar Battery Marina. No I don,t have a yacht, it’s where a lot of the open water swims happen to end.

Erika asked me to pick up her number at the NY Road Runners, no problem. The problem, it seemed, was that I had not registered for the race!

Half disappointed and half excited, I left the Road Runners and sent some emails explaining my dilemma. Ed from ‘Dad Posse’ solved the problem. He couldn’t run the race so I could use his bib! Fantastic!

At work the day of the race I sat and thought about what I was about to do…
I was going to wear Ed’s bib in a 3 mile run.
SIDENOTE: Ed is in the 50-54 age group. (Sorry Ed for revealing your age)
I would surely take home an age group award for him, which would be kind of strange at the awards ceremony.

I decided to run without the official timing chip for 2 reasons. 1: Ed is running to gain entry into the NYC Marathon and however funny WE thought him knocking 3 minutes off his mile average in a weeks time was, the NYRR might penalize him. 2: Not fair to the 50-54 age group.

I met Mike and Patrick (also from ‘Dad Posse’) before the race then we set out to line up for the start. This is a general mess of a start with no seeded corrals and a total bottle neck right in the beginning. It’s a charity fun-run, not something where you’re going to be setting any records so I always tell people to just enjoy themselves.

In the start corral I ended up bumping into Anthony DiGangi who I met at the Fire Island 5K last year. He and his brother organize the run and I highly recommend it. I’m already signed up for this year’s race (fi5k.org).

The gun went off and it took me 2 minutes or more to cross the start. After getting through we were truckin’ at an 8 minute pace, people were hopping on the sidewalks and it was actually kind of dangerous from a sprained ankle perspective. This is why Erika opted to not run. She hurt her ankle in a bike fall Tuesday and didn’t want to risk injuring it further.

On Church Street there was a moment where the course widened so I sped up and cruised down the left side.

Back into the narrow streets it got really hot. It was already 93 degrees, but it seemed to escalate in those tight quarters.

I’m a huge NYC history buff and in my head I was thinking “Man, I would love to teleport an early Manhattan Dutch settler to this moment see what he thought of our little 5K.” At least he would know how far a kilometer was right? Ha.

Water Street widened the track again and I picked up my pace. We were running directly into the setting sun and it got HOT!

The final stretch runs right along the water. The group I was with all started sprinting and yelling, why not.

The clock said 19:25 when I finished but I have no idea how accurate that was without a timing chip and how far back I started. It just felt good to get the blood going and race with a big group.

I grabbed a bottled water and poured the whole thing on my head. Problem solved.

Then I heard “Hey Baker!” It was Daniel (or Dnorton). He and I chatted about the run, along with another fast guy who introduced himself to us.

I grabbed my baggage and was gearing down when I saw Mattsix, followed by Joeonetime! (using Twitter names make me imagine we are all super heroes)

I left them to meet up with Mike and Patrick. The 3 of us ended up going to Nancy Whiskey Pub which I have been wanting to go to for 10 years! It was awesome! A classic NYC dirty irish pub with loud rock-n-roll and cheap drinks. I shall return.

Jim, Ed and I signed up to the American Heart Association Wall Street Run after work on e Tuesday Mike missed the deadline so he would cheer us on at the finish.

The race was mayhem as there were no corrals at the start, oly packs of people varying in speed. We all agreed to just enjoy ourselves.

At the start I was basically bobbin and weavin in and out of the crowds trying to get up to an enjoyable pace. I eventually did. It was a really fun run because we would through the financial district like mice! At John Street Todd and his team from Expand the Room came out and cheered me on which was a goo booster!

I met up with Mike at the finish and we cheered on Jim and Ed as they finished. This marked the first race we had run together where we could actually go get beers after. We made our way up to Broome Street Ale house in SoHo and did just that. It was a great end to the night.