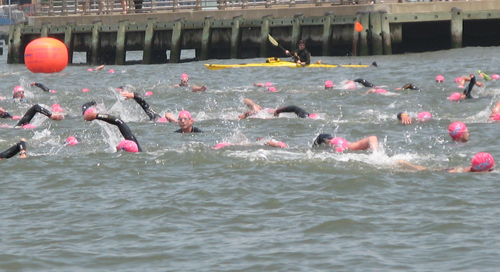 Jim, Ed and I signed up to the American Heart Association Wall Street Run after work on e Tuesday Mike missed the deadline so he would cheer us on at the finish.

The race was mayhem as there were no corrals at the start, oly packs of people varying in speed. We all agreed to just enjoy ourselves.

At the start I was basically bobbin and weavin in and out of the crowds trying to get up to an enjoyable pace. I eventually did. It was a really fun run because we would through the financial district like mice! At John Street Todd and his team from Expand the Room came out and cheered me on which was a goo booster!

I met up with Mike at the finish and we cheered on Jim and Ed as they finished. This marked the first race we had run together where we could actually go get beers after. We made our way up to Broome Street Ale house in SoHo and did just that. It was a great end to the night.