The 5th Avenue Mile is one of my favorite races. Last year I completed a dream, which was to run a sub 5 minute mile at the race and since then its always had a place in my heart.

Unfortunately running 1 Mile as fast as you can has NOTHING to do with Ironman training.

I was set to run the 5th Avenue Mile, then tack on anther hour and a half of medium paced running. Sunday was to be my long ride, a very important component to IM training.

As Abbe and I sat having coffee looking at the weather Saturday morning she said, “You know, it’s not supposed to rain today. Tomorrow is the big rain forecast.” Biking in the rain, aside from being dangerous, plain sucks. Running in the rain I can deal with. The decision was made then and there to skip my race and hit the road for my 5 hour long ride.

I set out, geared up with 2 water bottles of ‘fuel’ and a Clif Bar, headed towards the George Washington Bridge. My goal was to make it to Bear Mountain. I had never been and was really curious what all the fuss was about.

As I neared the GW I noticed a heavy amount of what appeared to be novice riders. Using my super sleuth skills I deducted that, yes, there must be some sort of group ride.

Once on the oh so familiar 9W I set controls to autopilot at around 20-22 MPH and just took in the scenery, sipping on my ‘fuel’ cocktail every so often. I felt great, perhaps due to Abbe’s Truffle Pasta from the night before compounded with my Irish Oatmeal. 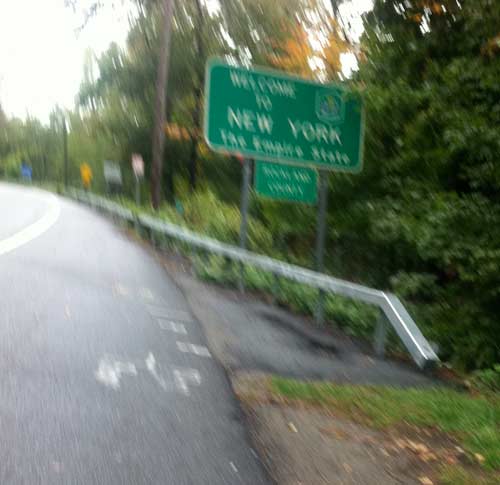 I always find it funny when you pass the Welcome to NY sign because… that’s where I was coming from! Did I just time travel, or maybe pass into an alternate dimension, or maybe the state is just shaped funny? 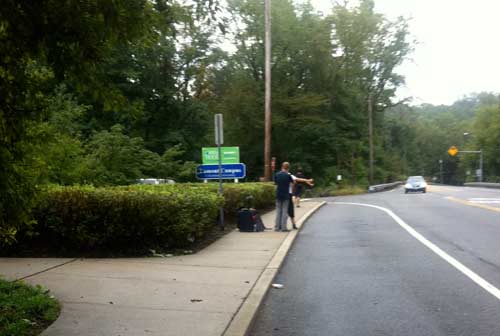 Hitch hikers? Really? Yes, I must have time traveled to 1972 when everything was safe! I started looking to see if cars had seat belts right after and realized I was still in the present.

I hit Nyack 1:30 into the ride and blasted forward, marking uncharted territory for me. An adventure… yes, lets have an adventure!

I went through a series of small towns and occasionally hit a stoplight. In my head I was marking off places where I could either pee or get more food or both.

I passed Rockland Lake State Park which was really beautiful. There were swans out on the lake and it was really peaceful. Soon after we hit a ‘T’ in the road and I instantly flashed back to my first Century Ride from 2002! We passed through this very spot heading in the same direction! 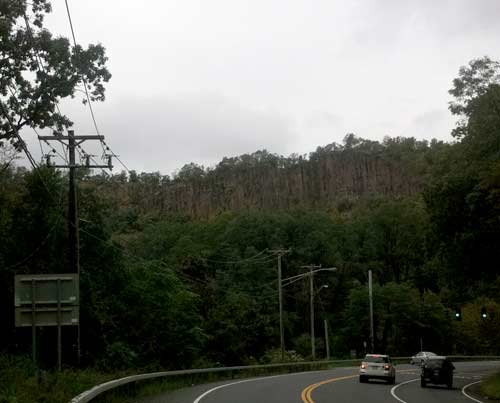 I passed these crazy cliffs and took a picture because they seemed very Lord of the Rings-ish and I pictured Frodo and Sam climbing them all starved cause they are out of Lambas Bread.
We went through a few more towns, Stony Point being quite quaint.

It was right around here I said to myself, “Where the hell is this goddamn mountain?”

I entered what appeared to be a wilderness area, or rather, a place where humans dared to live. The hills became fierce and I knew I was close to my destination. It was also at this point I realized that one of my water bottles full of ‘fuel’ jumped ship! This worried me slightly as I needed that energy to make it back home.

I took a left into Bear Mountain State Park and started going up Hell-o-Hill. Seriously, I rode for 30-40 minutes in my lowest gear, knees bleeding, straight up the mountain. For what it’s worth, the park is gorgeous. I was all by myself in dense forest with streams, brooks and all kinds of nature-y things around me. I was moving at 7 MPH the whole time and I was dying to see what was at the top of this thing. It had better be awesome.

It was. Clear views of the Hudson for as far as the eye could see. Pretty amazing. I think it’s so cool to live in Manhatty, in the heart of the urban jungle, and yet I can ride my bike over to a mountain! 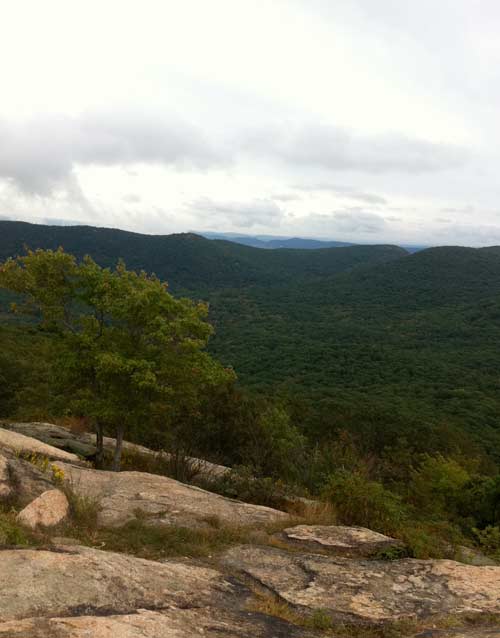 After taking a breather, I hit the road. It took me 8 minutes to descend the mountain and you better believe I had my hands on the breaks the whole time and was still going 30-35 MPH! It was wet and I didn’t want to slide off the side of the cliffs to my doom. 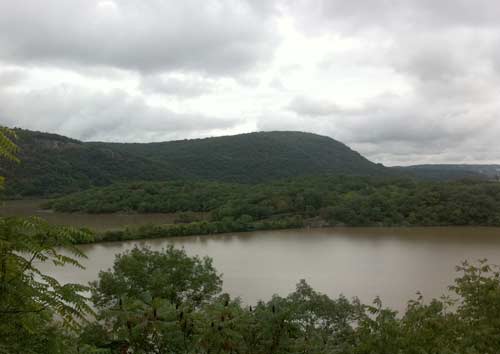 The second part of the ride seemed easier for some reason. Maybe it’s because I knew the terrain now, or perhaps I was just warmed up. I don’t know?

I had been riding without music on the way there, but on my return blasted some Drum n Bass to keep me company. It gets lonely out there on the open road…

Close to Nyack there is a Toga Bikes. I popped in and got a new water bottle and grabbed some snacks for the road.

As I neared the GW and was coming up on 90 miles I started to feel a little winded, but then I realized my ass was just sore.

It was a glorious adventure.