The tricky part about being both a runner and a triathlete is that sometimes races line up back-to-back. This weekend was both the NYRR Team Championships AND the NYC Triathlon (one of my favorite races of all time).

Friday night we had Bojana and Brian over for some pre race carbo loading. Abs made some pasta with calamari, shrimp and white beans. It was perfection.

I awoke at 6AM (my usual wake up time) to a gloomy, rainy Saturday morning. Josh wanted us to meet at 7:30AM for team pictures and to hand out bibs. SIDENOTE: the men’s race starts at 9:30AM, Josh you owe me 2 hours of sleep!

I love our team, so I was not concerned at all with the rain. In fact, I love running n the rain. I even said to everyone, “At least it’s raining today and not tomorrow during the triathlon, that would suck!” JINX. JINX. JINX.

The men went to cheer on East 97th Street while the women teed up the Start line.

20-25 minutes later there they were flying past us! Our women’s team is pretty sick. They can rock some serious paces and are not to be trifled with.

By now the rain had let up and it was getting nice and humid. My hair was a mess.

Us men did a warm up, hit the porto johns and then jumped into our corrals.

As I stood there in my corral I pondered the race and the triathlon. I originally decided to ‘take it easy’ and save my legs for the next day but that idea was starting to sound lame. A race is a race.

The gun went off and the pack went flying. Remember, this is Team Champs so everyone is a pretty serious runner. My legs felt absolutely fantastic and Abbe’s pasta from the night before was sitting pretty in the fuel cells.

We hit mile one at 6:03 or something. I was okay with that considering we still had 4 miles to go. I wondered if I could hang on.

Evan, one of my friends and teammates passed me right around this point. He was looking good and crushing.

Miles two and three came by quickly and I think I was still on the 6 minute per mile pace. I had no watch on so I was going by feeling.

There was a crazy headwind at mile 4 four but it acted more like a coolant than something that hindered. 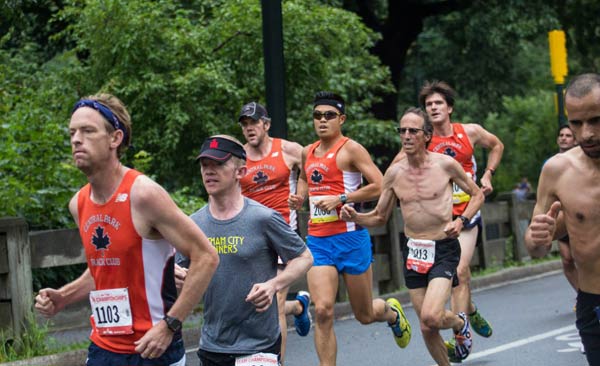 I look a bit weathered here.

At the fifth mile my legs and engine (although kicking) still felt fine. I ramped it up a bit at this point, knowing the end was near. With 500 meters go to I passed our cheer squad and gave them a wave. 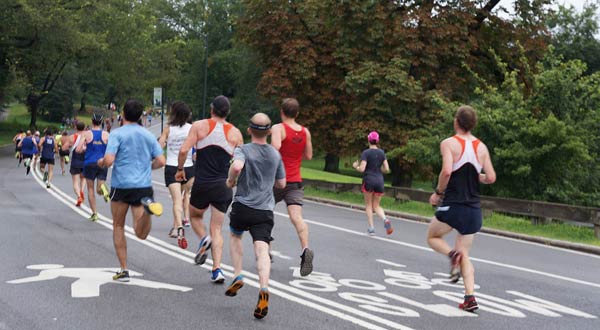 I waited for everyone to finish then we found the gals and rolled over to Fetch for some post race food! It was a great morning and so fun to both cheer on the team AND race. Go Gotham City Runners! (San Dimas High School Football Rules!)

The Guys of Gotham