I tried to just relax Saturday after Team Championships but… instead I met my brother, sister-in-law, and friends Stephan and Amanda (Abs was there too of course) for drinks and dinner.

On a positive, more intelligent note I made us go to an italian restaurant for dinner. I had a lovely pasta with grilled scallops!

I was in bed by 10:30PM or so, pretty late for those people actually planning on going to transition before their triathlon the next day.

I woke up per usual at 6, 15 minutes after transition had closed. This was planned by the way. One of the problems with the NYC Tri is that with all of the wave starts you need to be in transition from like 415AM to 5:45 AM… LAME! My solution? Leave all your sh%t in transition the day before when you drop off your bike. I’ve done it a few times and it has never failed me. I even got to watch the start of the race on the local news!

After having a cup of coffee and watching the news I decided I had better get over to the swim start. I jumped in a cab at 7AM and was putting on my wetsuit by 7:10. Did I mention that it was raining?

Something I often talk about with fellow triathletes is the concept of ‘experience’ as training. Today it was playing a huge role. I have swam the mighty Hudson river 10 or more times and rough open water swims even more. I was in no way nervous like a lot of the guys surrounding me were. I tried to calm them with jokes and silly one liners but they seemed to think I was BSing them. My point is, new triathletes, get out in the ocean or a lake for your training swims.

Into the soup we went. The current was moving really fast as it usually does. Now, some people argue that this is unfair. My argument is that everyone gets the fast current, equalizing the race.  The Pros were swimming some obscene times and so were the rookies!

The water on a scale of 1-to-Gross was like an 8 today. I tried my best to just keep it out of my mouth. My swim overall was pretty great. I may not be the fastest, but my confidence and sighting abilities keep me competitive. I even passed a few people in my heat!

As I hit T1 I was happy to see everything just as I had left it!

I popped on my ride and hit the Henry Hudson Parkway making my way north in the rain.

The bike course on a sunny day is treacherous with its harsh pavement conditions and tight lane configurations, throw in a steady rain and it becomes really harrowing! In the beginning I just slowly increased my pace and shook out the ol legs. I had some EFS that I was taking in every so often as well.

I think 8 to 10 miles in the rain let up a bit. I was starting to feel very good and very aggressive so I began to crank it, passing many people.

Once we hit the turn around point up in the Bronx I really turned up the heat. In my head I basically said, “This is a race, lets blast it! The run will get done one way or another.” And just like that I was having the time of my life. I was riding a space ship where the controls were set to light speed. No one passed me from this point forward. 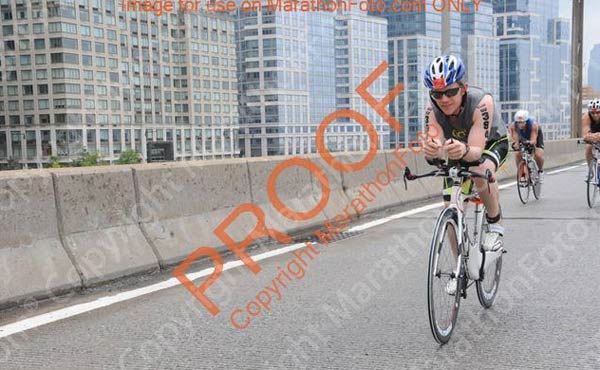 Towards mile 20 I passed Joe who yelled to me. I replied, “Jooooe! How you feeling brother?” To which he replied, “I feel great!” I threw up a fist and carried on. I later passed my friend Digangi too who was also crushing it on the bike!

Cruising through T2 I hit 72nd Street to begin the run. My legs were heavy but not dead. ‘Give it 1 mile.’ I thought. I heard my name being screamed something fierce out on 72nd and realized i was Claire, TG and Abbe! Then, I passed my teammate Suzette and finally Elizabeth before heading into my backyard… aka The Central Park. 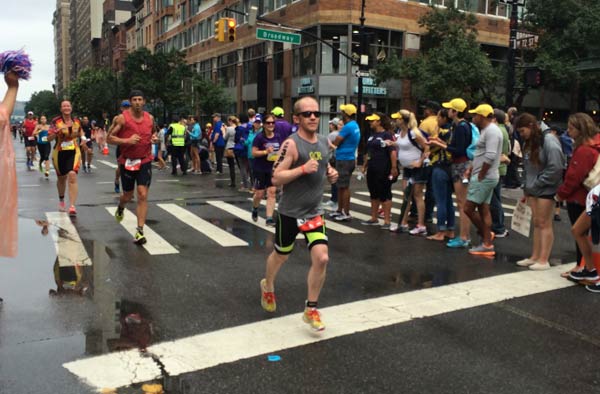 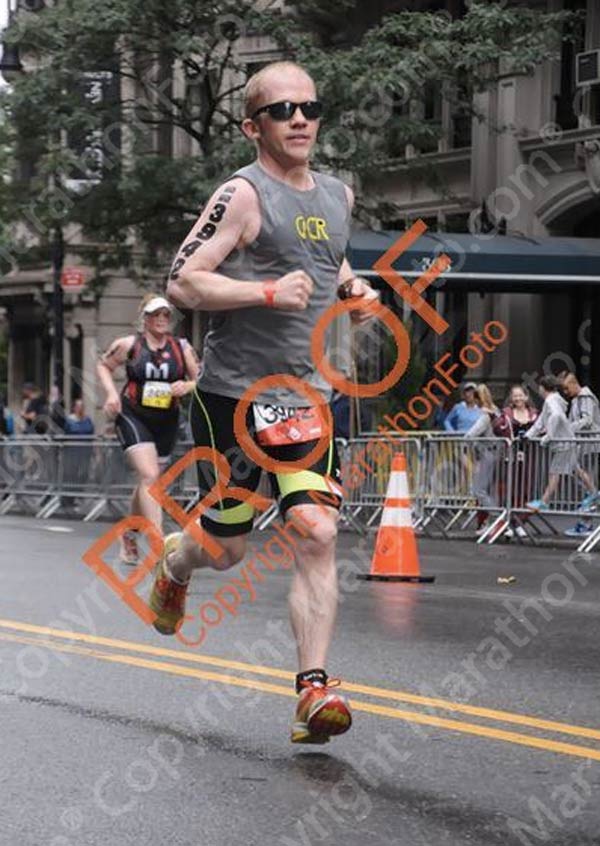 As I hit aid station one Matt6 was in his usual spot. “Baker!” We gave each other an elbow bump before I moved onward. Soon after I saw my friend David running in opposite directions cheering me on. I hit mile one in 7:01. Not bad.

Then, mile two at 6:48… whaaaaat? I was actually speeding up, strange indeed.

At mile five I passed a 75 year old man running barefoot. I saluted him. I want to be him in 40 years.

I decided to pick up for the last mile, especially knowing that there was just one slight hill at the end. I pushed it to a 6:16 pace, now things were burning.

As I finished up I saw my friend Juan working an aid station. He cheered like crazy, which helped to push me to the finish line. I had a 2 minute PR with a finish of 2:15:31!

I found Abbe, Neil and Amy (also PR’d)  after who all had fantastic races. We tried to find Joe (who had a 15 minute PR, whaaaaaat) but he had already left.

It was a hell of a day and an even bigger weekend for me. I love racing so much and to get to do it 2 weekend days in a row is so satisfying! Congrats to all my friends and athletes who raced and killed it.