I was quite excited (and honored) this year when I was invited to the annual ‘Dave Lewis Ski and Snowboarding Conference.’ It’s not really called that… yet.

Abbe’s father Dave has been organizing family ski trips (minus Mama Lew as she isn’t much of a skier, but was missed) since they were teenagers. The three of them, Dave, Abbe and her older brother Rob are quite a force to be reckoned with on the slopes.

Abbe and I left NYC at 4AM (correct 4AM and it wasn’t even an Ironman) to catch our first of two flights. You know it’s early in New York City when you’re leaving to travel and the bars are just letting out.

We arrived in Atlanta and rendezvoused with Dave and Rob. After another flight, we arrived in Steamboat Springs just after lunchtime. I was blown away by the majestic beauty of Colorado! Oh, that’s right, I have never been to Colorado so was super excited to see what it’s all about! 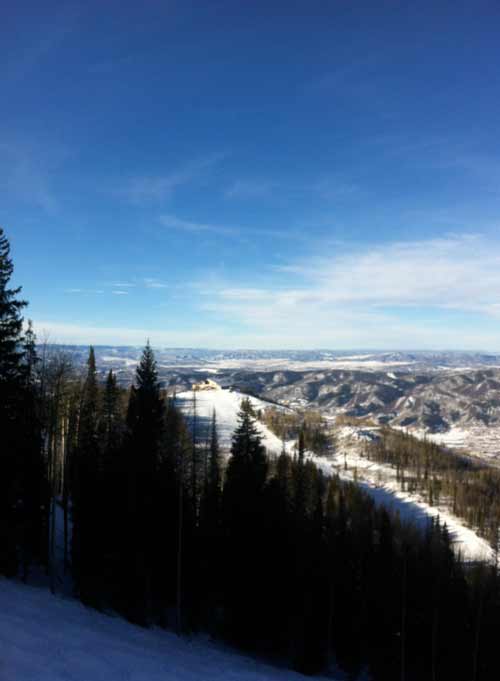 We checked into our hotel and headed over to Rex’s (attached to our hotel) for lunch. We spent a lot of time at Rex’s as the food is amazing and well, they serve booze a mere 100 yards from our rooms. We then went over to Steamboat and dropped off our boards for some waxing and sharpening followed by a Buffalo Wing Fest Dinner had by Dave, Rob and I. Abbe opted for a less spicy option. I also bought a helmet. This was a most intelligent decision based on future events.

We were up early and my body was treating it (as it would treat all 3 days) like a race day. Meaning, after breakfast I was drinking water and peeing A LOT! I guess it’s some psychological tic I have now developed. 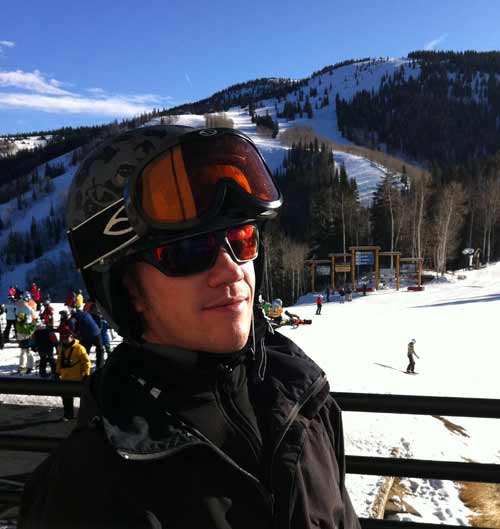 We were at the slopes by 9AM and the gang let us start on some smaller runs first so I could get warmed up. I hadnt boarded in 2 years, let alone on the west coast!

I immediately started wiping out left and right. Most of you that know me understand that I am extremely competitive, especially with myself.At the bottom of run 1 we then hit the gondola to get to some of the more serious runs. It’s funny writing about runs.

For any of you who have yet to experience west coast skiing, aside from being beautiful, it’s scary. A 10,000 ft. peak isn’t something to underestimate. Standing on the summit, wind ripping across you as you stare at the endless horizon of Rocky Mountains you wonder how you are going to get down from this high place. Then, you look down and see your fate.

Before following the crew down this time (Abbe sensing my frustration) I got some pointers from Abbe. These helped out a lot.

Abbe also told me not to wear my race sunglasses, but I did. I took two serious diggers that day, the first of which shattered the sunglasses and had Abbe, arms folded, saying, “I guess you should have listened to me…”

We boarded that day until 2PM when Abbe and I dipped down to the outdoor bar at the base of the mountain. Dave and Rob have a lot more stamina for skiing/snowboarding so they kept at it for a few more hours. 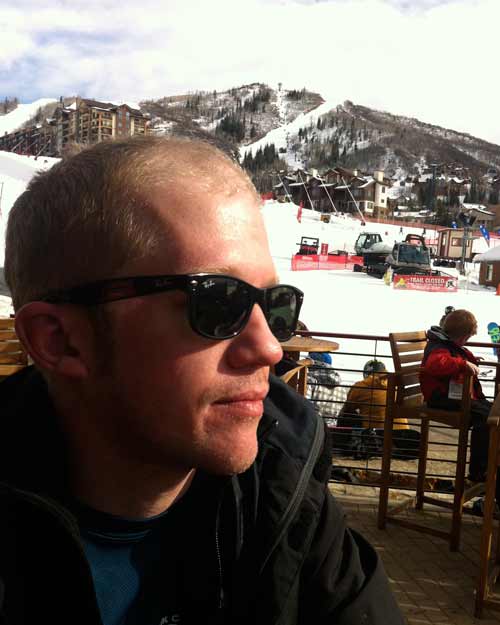 Chillin’ out at the base, Longhammer IPA in hand, I realized just how much better west coast skiing is compared to east coast. The mountain of course is  6-10 times the size. The people are so cool. It’s not crowded. The design of everything is so much better, meaning all the bars and hang out areas were set up properly with fire pits and plenty of space. The east coast is just crowded, dirty and obnoxious. Rant over…

That night we had an awesome dinner at, yes you guessed it, Rex’s!

As I was walking down my hotel hallway I was jumped by a gang. They beat me up pretty bad. My legs were trashed, my arms hurt and my neck was even jacked up. Then, I woke up and realized, “No Baker, you were just snowboarding yesterday.”

Now, what I learned from DAY 1 was that I need to chill out and focus on my own personal fun. I was trying to keep up with the Lewis Crew all day (even though they had no problem waiting for me) and therefore I stressed myself out. Today, I was going to bust some moves on the slopes my own way and have fun doing so!

That’s exactly what happened. From run 1 my boarding skills had dramatically improved since the day before. I was more confident and carving down the slopes with a smile on my face. I even yelled a few times.

Another thing about the west is that the runs are so freaking wide! You don’t have to worry about running into anyone! (okay, a little bit you do.) I was having a blast and I only fell maybe one time. After that fall, Rob gave me a piece of advice on my posture that was a game changer for me. No more bad falls. Pure carving.

Once again Abbe and I dipped out after lunch to chill slope side. It was absolutely beautiful out.

We headed back early as the Giants were playing 2:30PM our time and Abbe is a very serious fan. When her and Claire join forces and it’s very serious. We chilled at Rex’s watching the game before heading to sleep. Snowboarding makes you crazy tired!

Snow day! As we arrived at the base of the mountain and began our assent to the peak we could see the storm moving across the valley towards us. Jumping down the slope onto the first run the storm had reached us. It was pretty incredible. My snowboarding skills were at their peak, seeing as how this was the 3rd day, and I was having a blast carving down the mountain. Visibility was limited, but it made it kind of exciting.

Towards lunch, as I cruised down, I saw Abbe in front of me ‘man down.’ Dave and I scooted up to her to survey the damage and luckily she just banged up her knee. After her and I took one last run I escorted her off the slopes for some lunch.

Those of you who know me from years past know that I’m a big time ‘hot tubber’. I love ’em! Back at the hotel it was really snowing and I said to Abbe, “Lets hit the outdoor hot tub!” With no time to lose, we ran outside in our bathing suits and jumped in. It was amazing sitting out there as snow dumped on us while we relaxed in the comfort of the hot tub.

For dinner that night we hit a spot downtown called The Laundry. Excellent food. Bad service.

With our snowboarding adventures over we now had a full day of traveling to get back to Mighty Manhattan. I was not looking forward to it at all. Reality checks can be such buzz kills.

Big thanks to Dave for being our guide all weekend! Shout outs also go to Rob and Abbe for helping me out with tips and form advice!