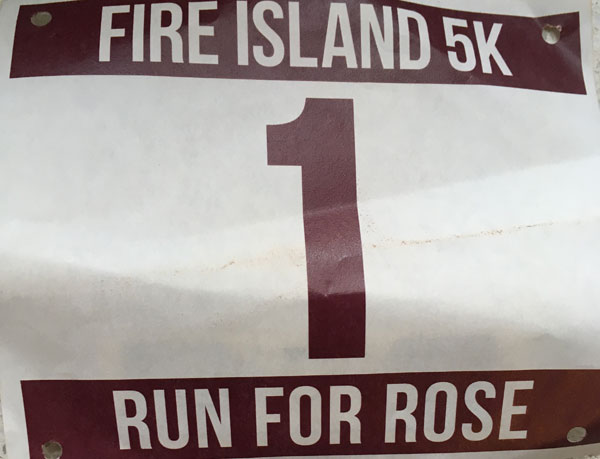 On Friday, I left work to meet up with everyone (Abbe, Bojana, Brian and Maura) at Penn Station. It was steamy and I broke out into a sweat immediately on the subway platform, just a precursor of what was to come.

It seemed that my crew had boarded the train, so I did the same. Once we all found each other drinks popped open and a ‘Here’s to a vacation weekend’ toast ensued. Fun, had begun.

One of my favorite parts of the journey to Fire Island is the final 30 minute ferry ride across the Great South Bay. It’s such a gorgeous experience (if you have weather cooperating). The wind in your hair, the sun setting and the smell of ocean water marinating in a boat full of happy beach goers.

Another one of my favorite parts is that there are no cars on the island! Bikes and walking everywhere, it’s so cool!

We arrived at Ed’s place, the Fire Island Hotel, checked in and hit Hurricanes for the notorious Rocket Fuels. A Rocket Fuel is a like a Pina Colada on steroids, and yes, they are delicious. From 7 to Midnight we sat there drinking and eating (the fish tacos are superb) carrying on. Ed (from Dad Posse) eventually joined us around 9 and joined in on the mayhem. 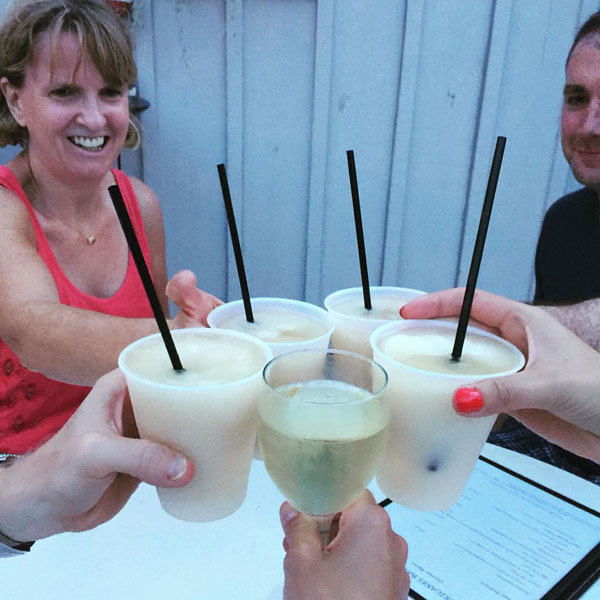 The following day Jim and Mike (also from Dad Posse) joined up. We went to Jim’s place which is a few blocks down from the hotel and has a more than solid beach day. Jim and I surfed and caught some real nice rides. The tides shifted after lunch though and I changed it up with a boogie board. Those were some of the best boogie board conditions I have seen since I was a kid, you could catch anything! 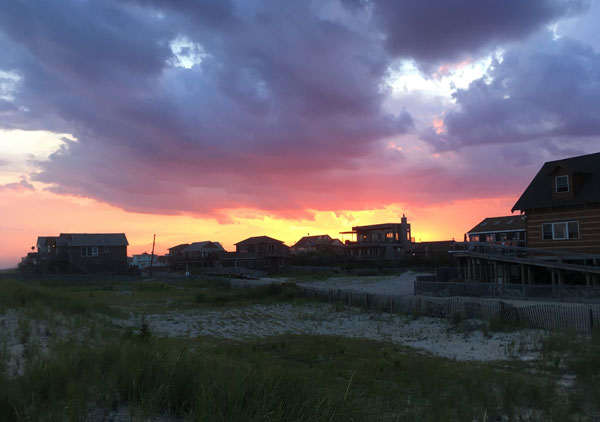 That night we had a cookout at Jim’s. We made everything you could think of… chicken, corn on the cob, green beans, baked beans, ribs, salad and I think there was cheese. Something in that mix had to stick and help in the race the following day right?

Did I mention that John C. Reilly was having a cookout at the house next door?

I woke up at 6:45 and said goodbye to a sleeping Abbe. Jim and I had morning surfing to attend to.

Coffee in hand I strolled down a very serene pathway to Jim’s, no one was awake yet and the peacefulness was exactly what I needed.

Jim and Mike were awake having coffee on the front porch, I joined them. Soon after the three of us walked up to the beach and jumped into the soup. It was brisk, but refreshing. Mike stayed behind to swim in the surf and Jim and I headed out past the breakers. We were the only ones out there and it was super cool. Not cool if the sharks are hungry as they have limited options, me and Jim. 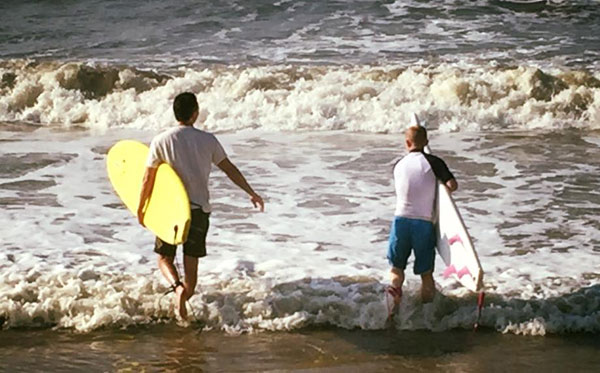 I caught 2 really nice rides that took me almost all the way into shore. It’s a really great feeling riding a wave, the Beach Boys said it best… ‘Catch a wave and you’re sittin on top of the world.’

We bailed after awhile as we had a 5k to race in an hour. Energy conservation right?

I met Abbe and split a bagel before gearing up. Her, Maura and I did a slow warm up, linked up with Ed, Mike and Jim and headed to the start. Bojo and Brian were going to spectate due to unforeseen injury. We did a pre-race team photo knowing that the post race team photo was going to be ugly. It was 85-90 degrees already.

I jumped in the front corral with 10 others and wandered around in the sun for ten minutes. Anthony, Sal and John Gigangi, race organizers and friends of mine, gave a few speeches before show time. It’s amazing how far the Rose Digangi Foundation has come in helping people and family’s cope with brain cancer.

The gun went off and it was on. 5 people went out blazing fast and I just, well, I just ran right on the threshold of it being really sucky. On the out part of the race we had a headwind, which kept us ‘kind’ of cool. I dumped water on my head any chance I got though.

I ran the entire race with Tara, who always wins 1st Female. We were holding a 6:30 pace steady. I had no interest in pushing it any further. AT Mile 1.5 one of the teenagers that blasted ahead in the beginning was on the side puking. I yelled, “Hey man, you okay!?” He was.

On the way back we had a tailwind. In most circumstances this would be a welcome condition in a race, not today. It was as if someone turned off the fan in a really hot courtroom. Just keep running.

As Tara and I were nearing the finish I realized they had the tape across for her (1st Place Female) so I hung back a bit and let her hit the tape before crossing. I then poured no less than three bottles of ice water on my head and retreated to a shady area by the finish. 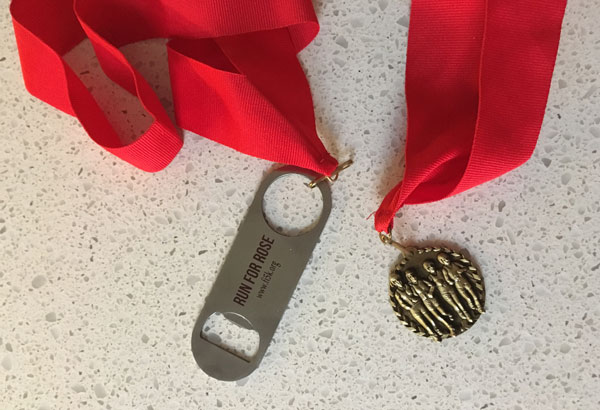 One by one the rest of The Battalion came through the finish looking for water. We all got really cool finisher medals that had a bottle opener on it! 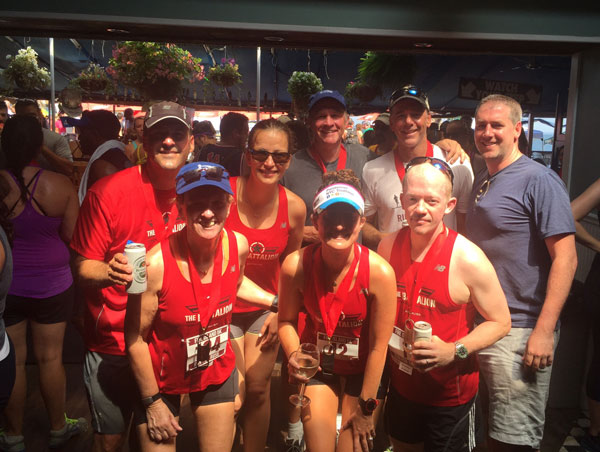 Once we had the gang together we made our way into Schooners for the after party, which is quite a fun after party. We hung out, laughed, talked to other runners and hydrated with beer. I got a 2nd Place AG award but more importantly Maura got 3rd AG! Baker… why is that more important? 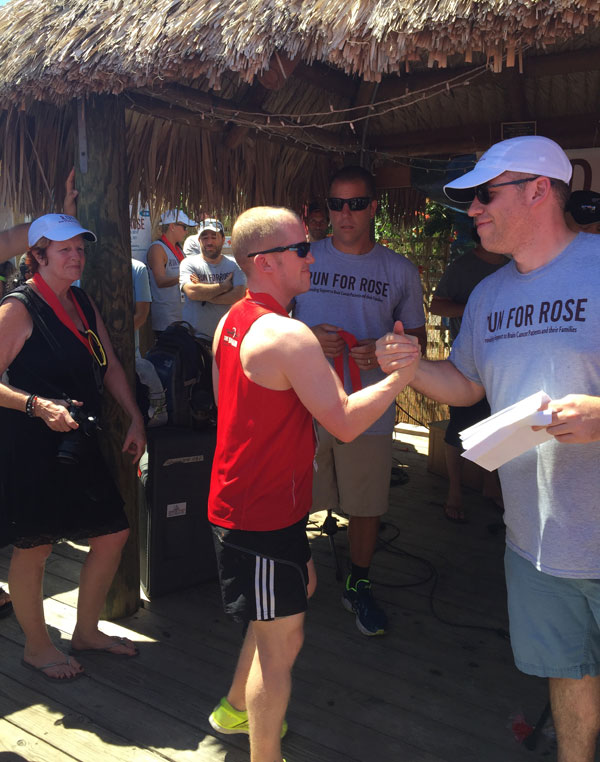 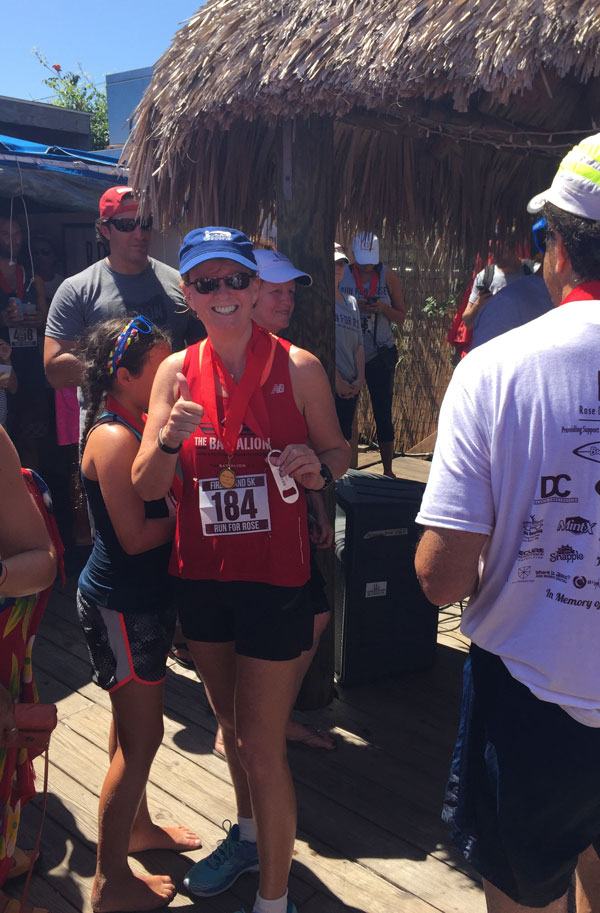 Maura has been injured for god knows how long and is back on track. This was her first race since November (I think) and she got an AG award! Well done Maura. 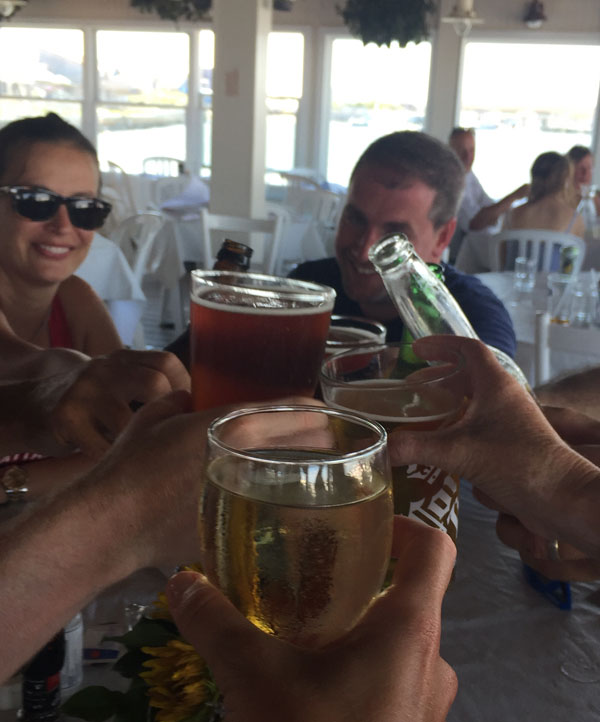 We all headed to Flynn’s for a big lunch. Abbe and I caught a ate afternoon ferry home, bidding our friends and Fire Island farewell… for now.