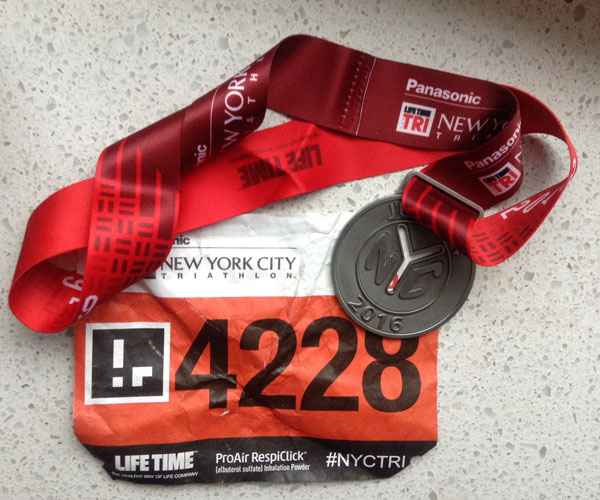 The NYC Triathlon is my favorite race hands down. Home field advantage, great course, all my friends race or spectate and we have a fun after party (of course).  This year was my fifth attempt.

I was up at 5:30-6ish as Abbe had a long run she needed to hit and she wanted to beat the heat. We had some coffee and then we each set out on our way. My heat was set to roughly go off at 7:30 so my plan was to take a cab to the swim start at 6:50. I was there by 7, peanut butter sandwich in hand walking through the crowds of triathletes. This is the 4th year I did not go to transition at 5AM to check on my gear. Luckily though, Dougie had to head down there early so he checked on my gear for me. Thanks friend!

I lined up in my corral and watched the mighty North River pass by as I waited to get into the soup. Abbe surprised me by stopping through during her long run to say hi and wish me well.

I made friends with a guy from Ireland (but lives here) named Derrick. It was his first triathlon ever so I tried to be helpful by giving him tips and easing his nerves. I told him that this was the cleanest I had ever seen the river, which was actually true.

As we lined up to jump in the water everyone but me sat down to slide in. F-that, I’m jumping in over all of y’all.

The North River was salty, way salty as we hadn’t had any rain in a few weeks. I didn’t mind as I automatically pair ‘healthy’ up with ‘salt water.’ This was the first time I had swam since Ironman Louisville and I was excited. I dug in and enjoyed my morning swim, basking in the sunlight. Every now and again I would catch some feet or someone would tickle mine, and so I adjusted position.

With 200 meters to go something happened that has never occurred in Baker-race world before. As I was taking a breath on my right side someone (on my right side) was driving their left hand down for a stroke. That had caught me square in the side of the head, kind of by my eye. My goggles flew off and I was ‘stunned’ for a hot second as if I were in a boxing match and just catch a right hook. I composed myself, put my goggles back on, accidentally touched the bottom of the river and got back into the groove. I secretly wished to come across my assailant so I could vanquish him, alas it never happened. Swim caps tend to make everyone a bit anonymous. 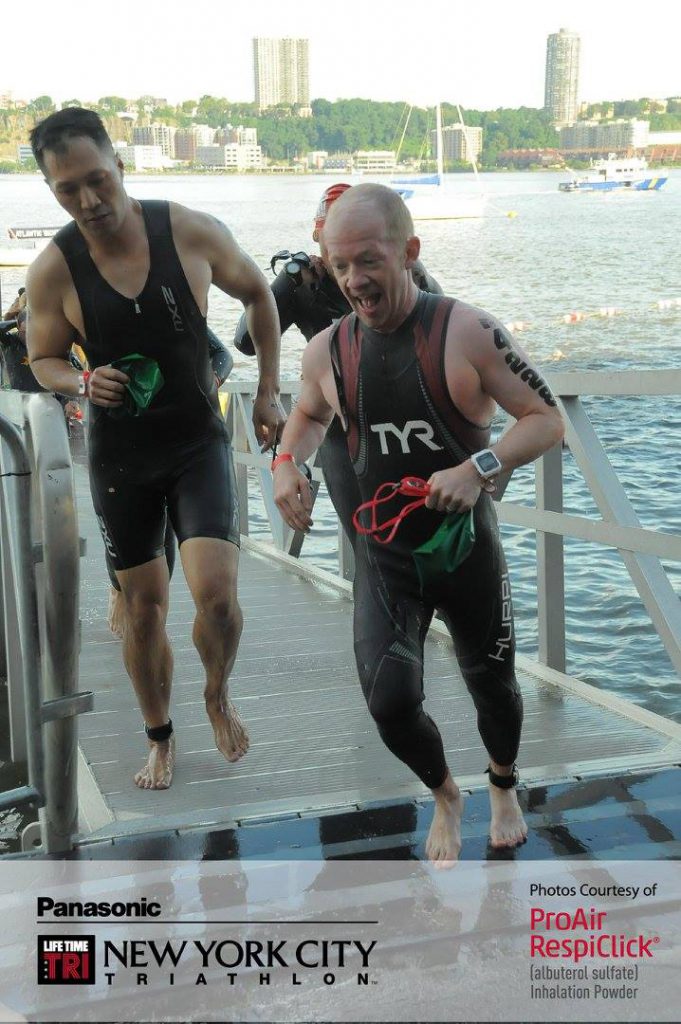 Out of the water and into transition we go. Always, always, always my wetsuit never comes off as quick as I want it to. I almost asked the guy next to me to rip it off. I could have offered him copious amounts of 50 SPF sunscreen. Speaking of which, I coated my wet body with the stuff before heading out on my mighty steed. 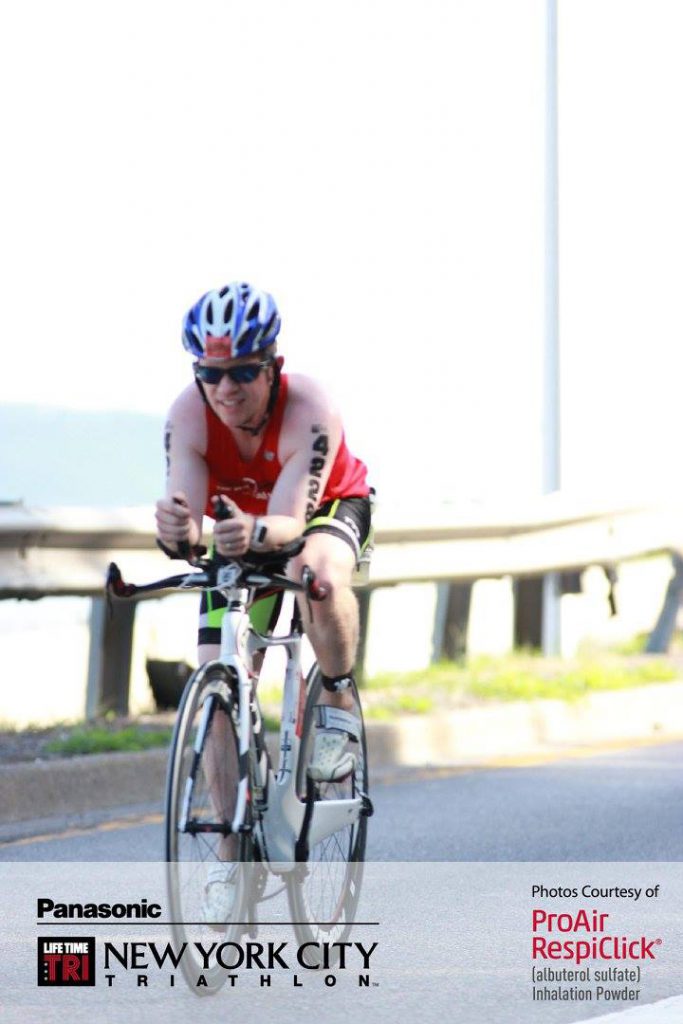 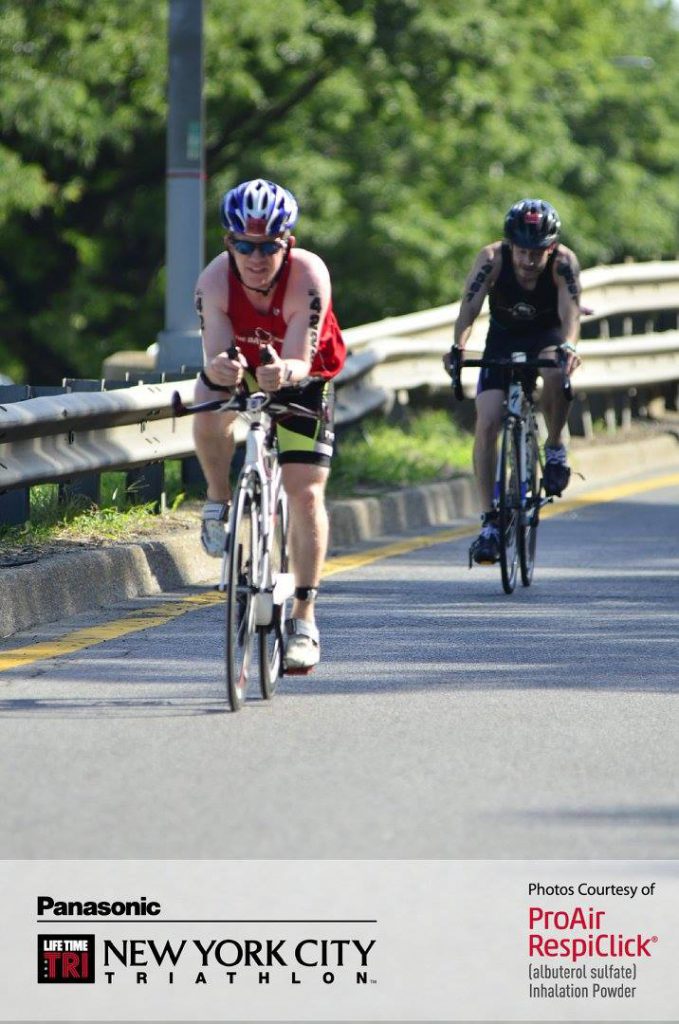 Out on the parkway I kept it cool until I could analyze my surroundings. The bike course on this puppy is way intense due to volume, speed, and lack of space. One wrong move and you’re toast.

Up in the Bronx I really took advantage the hills and flew. It was awesome.

I threw on a visor, more SPF 50, and got going. I stopped to say hi to this older woman who works at NYRR I know. She is like my alternative Grandma. Clearly, I always forget her name.

Did I mention that it was hot out? 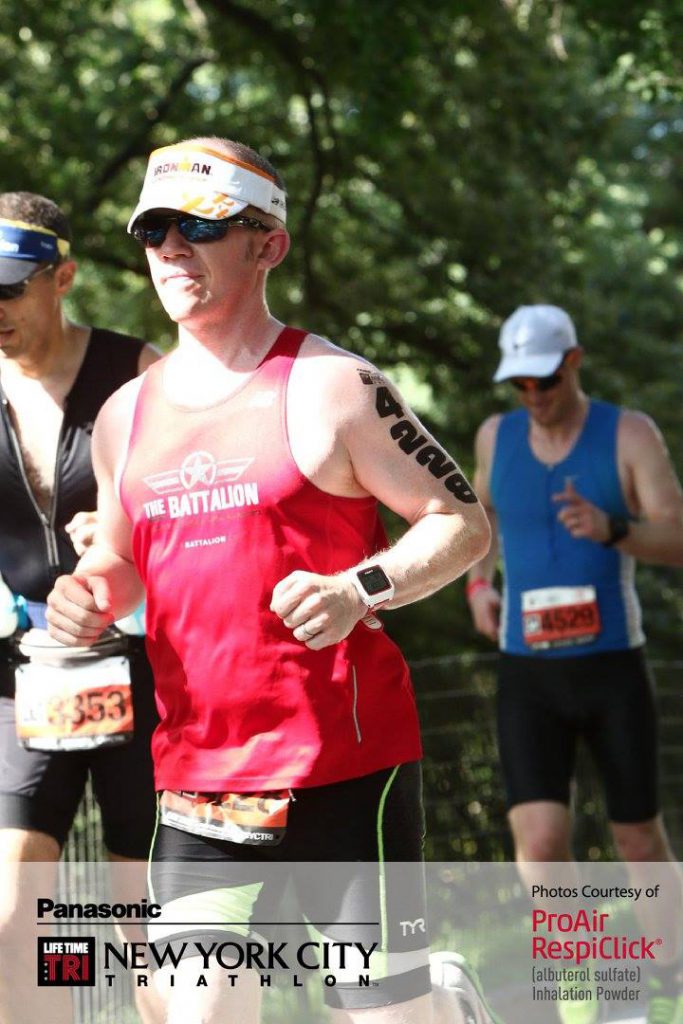 I hugged the shade as we cruised across 72nd Street. I saw Abbe and the cheer squad and I gave them all high fives. Further down I saw Thomas cheering. He and his wife Claire (willrunforbeer) were going to/ had a baby the next day so I yelled to him,”Good luck tomorrow!” which only confused him. Claire later explained what I meant. Congrats Gallaghers! I can’t wait to meet Molly! (Can I call her Meg though, that is her initials.) 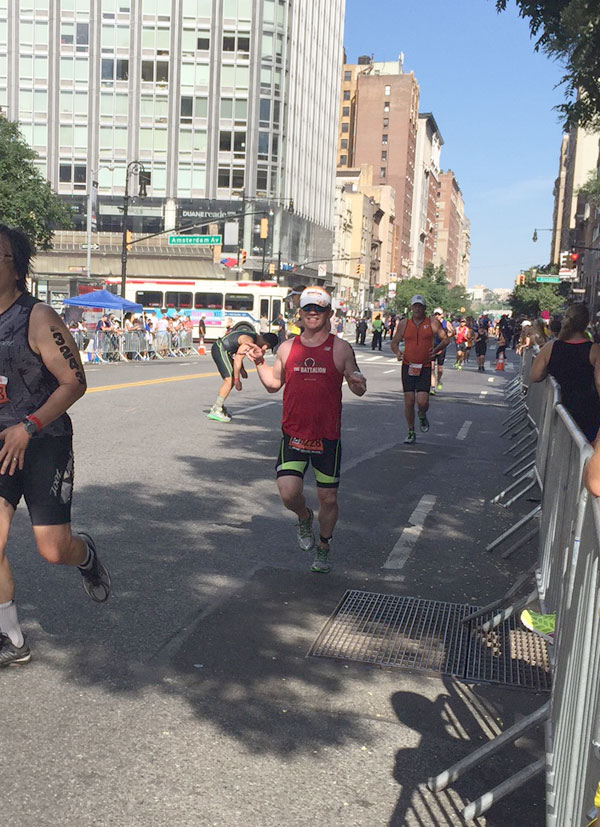 I hope that guy behind me is okay.

Back to the race…

I entered The Central Park and was so thankful of the shade on the west side. I felt great and dialed it up, passing who ever I could. Running is my jam, and you are in my backyard, so double trouble.

On the east side I saw my friend Sal, who was out for a run in the opposite direction, he wished me well. Then, out of nowhere some chick blasted me with a fire hose! She was at an aide station and I welcomed it, but I mean she destroyed me! I was soaked and now slogging along making funny squishy sounds.

I rounded Cherry Hill before launching into the finish chute. I saw Abbe, Susan, and Eric cheering and waved. I finished in 2:27:37, 10 minutes from a PR, but it was certainly a good time. 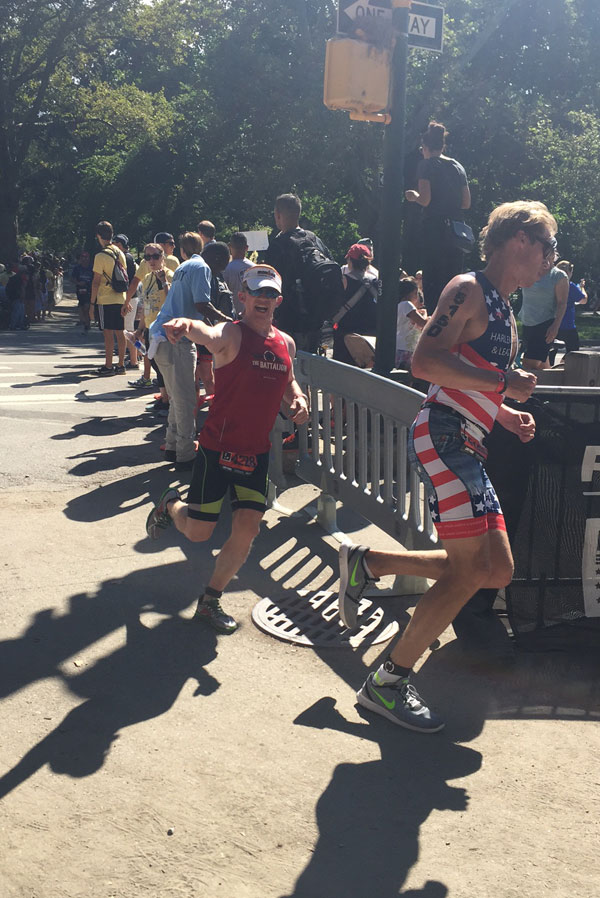 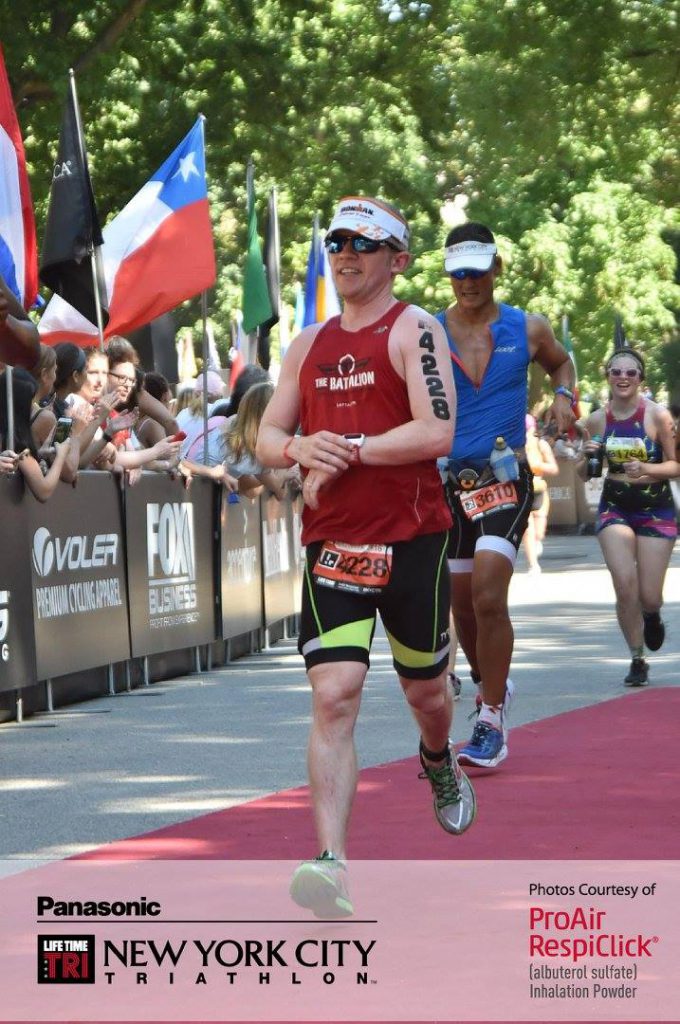 The Battalion all grouped up before heading to Amsterdam Ale House where we celebrated with food and drink. It was a hell of a day.