The War at the Shore was a triathlon I was particularly looking forward to as two of my athletes were also racing. They have been crushing their training and I had really good feelings about what was to happen.

I rode up to Amy’s apartment to hitch a ride with her. I forgot that riding a bike at 3PM in street clothes and a giant transition bag is super challenging! After packing up our bikes we were off, zipping down the turnpike. We were headed to Amy’s Mom’s place, our lovely host for the evening due to the close proximity of the course. Joe (also racing) was going to head down later that night to meet us.

One negative comment I need to make about packet pick-up is that they need to explain parking better. We were driving around for 30 minutes trying to figure out where to park. It was crowded because it was the beach midday on a gorgeous weekend. We eventually just double parked illegally and ran to get the goods.

Amy’s Mom rocks. She made us some killer veggie pasta for carbo loading! We all slipped off to bed just after 10PM with alarms set for 5AM, not terrible.

We were all up right on time. Joe was even already outside loading bikes onto the rack! It was a simply beautiful morning.

Within in 20 minutes we were in transition setting up. The big talk leading up to this race was wetsuit, or no wetsuit? Amy, a ridiculous swimmer, doesn’t even own a wetsuit and isn’t concerned with them. Joe had a speedsuit on. We had thought the water temps were going to be low 70’s and so I was getting ready to swim with just my trishorts. It was only 600M so we weren’t going to be in the soup for that long anyway.

Then, this old salty dog of a triathlete strolls in talking about how nice the water was at 68 degrees. Game changer. My wetsuit was getting put on 2 minutes later, a decision that I am glad I made.

We all made our way down to the shoreline to await gun time. We tested out the water and yes, it was nippy. I think,based on reading some other reports, that it was closer to 63 degrees.

The Sprint distance females set up for their start. We bid Ames god luck! As Joe and I stood watching them start I said, “Amy is going to win her Age Group today.” I secretly knew Joe was going to do some damage too, but I kept that to myself.

10 minutes after the Sprint Joe and I lined up with all the other ‘Intermediate’ distance racers. The gun went off and we headed for the mighty Atlantic! It was cold as shit.

I can always gauge a cold swim from when my face hits the water. This was cold and I even, for just a second, wondered if I should keep going. Such a silly brain I have. After doing this for awhile now I tend to love the chaos of the swim now. I mean, like the crazier it is the more fun. This one was great. Aside from us all being really packed tight together, the sea was rolling us around. Because there was so much action it was very bubbly, like a feeding frenzy. I was also getting my legs grabbed a lot, but in turn I was able to hang on and draft a few faster swimmers. I almost got BLASTED in the face by some guys heel too but a looked left just quick enough to avoid it.

5 minutes or so into the swim things spread out a bit. The buoys started coming faster. As we finished though, we were definitely in a rip current. It felt like we weren’t even moving and yet, so close to shore. 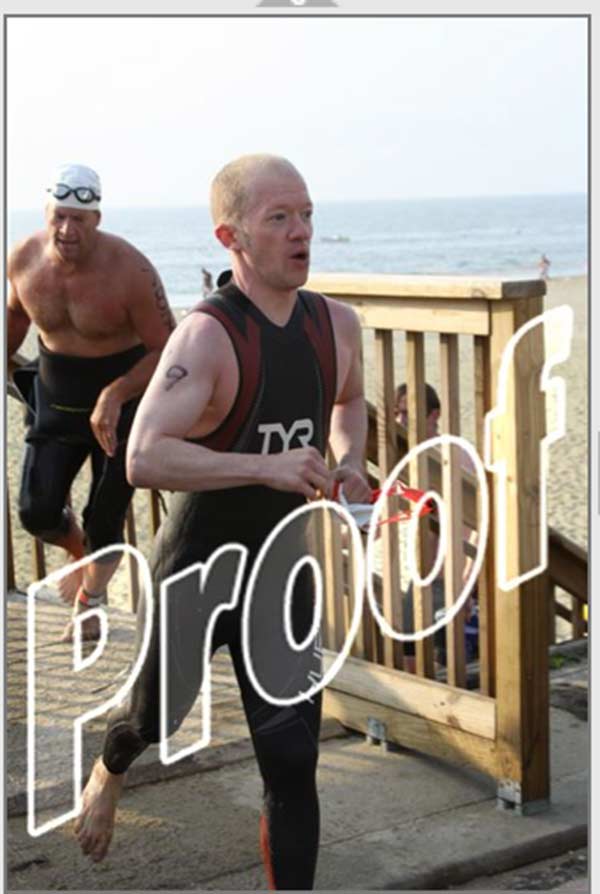 Joe was just up ahead of me as we were running into transition.

The bike was an 11 mile two loop course. I felt great heading into it and then a mile or two in I noticed t was pretty windy. Like, the kind of wind you curse at, coming right at us from the south. This was going to be a challenging ride.

At mile 3 I hit a bump and there goes my only water bottle! Quick decision was made that I didn’t need it and especially didn’t need to stop my momentum. I was feeling good and pushing just hard enough so as to not trash myself. 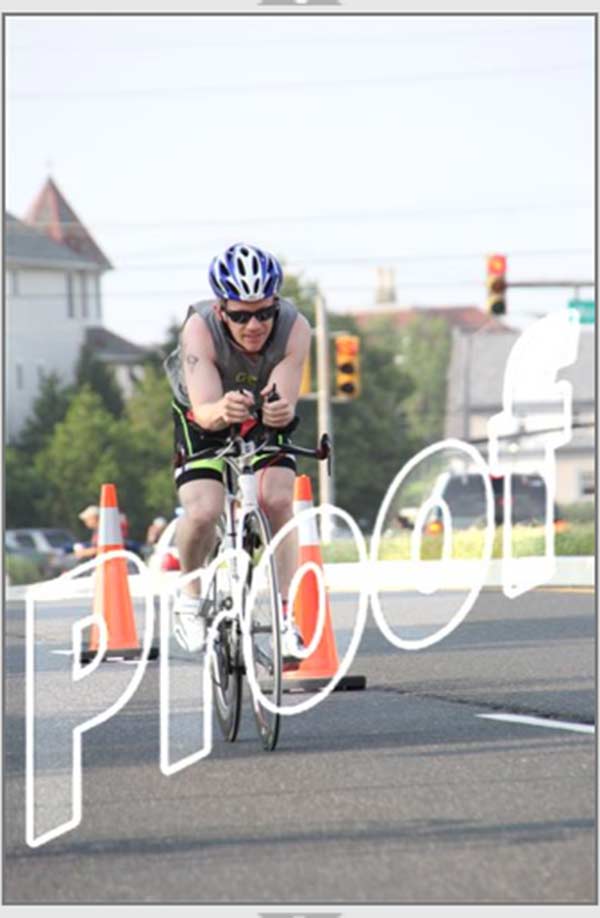 At the turnaround point (mile 5 or 6) a wonderful thing happened, were had that wind at our backs! I put my head down and dug in taking advantage. I was passing a lot of people but also leapfrogging with a number of other riders.

Heading back out onto the course a second time was pretty humiliating. We had the wind at our faces again and it felt like I was going nowhere fast. Knowing I just had to make it to the turnaround point I just hung on. I saw Joe at one point and we did a shout out!

In T2 as I was getting ready to run out I heard some guy talking to his pal who was getting his run gear on, “So how was the wind out there?” I ran by, smiled and yelled, “The wind sucked!”

Mile 1 we ran north, wind at our backs to a turnaround at the 1 mile mark. Legs were feeling good but the heat was wearing on me.

At Mile 2 as I was coming back onto the boardwalk and towards transition the wind was blasting us head on. It was pretty rough. I did my best to just keep my legs moving, knowing that I only had 3 miles left. I passed a few people, but was still not in my running zone.

I saw Joe a few times and he looked like he was having a good race.

As we hit the turnaround, with like just over 1.5 miles left, this guy up ahead made the mistake of looking back. For whatever reason, it fired up my engines. Wind at my back I threw it into run ’em down mode. My legs hurt really bad and the sun was blazing. I had no idea what my pace was because I was running naked, but it felt fast. I passed a good 10-15 people on that home stretch. I don’t know what came over me, mentally I was in some other world. 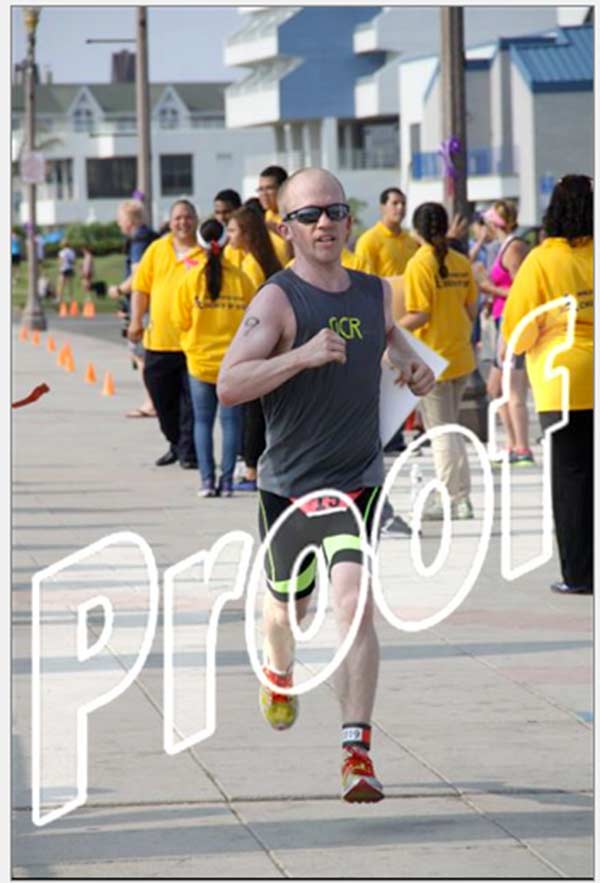 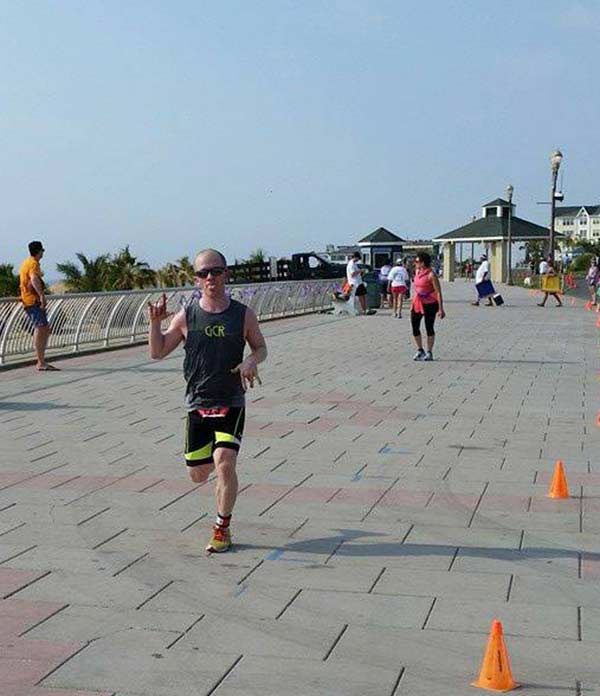 I saw Amy taking pics as I cruised into the finish chute. She was standing there with her 1st Place AG trophy!

We waited and watch for Joe to come through. He finished looking good and then we went and found him. We had just found out that I had won 3rd Place AG. As Joe was getting some snacks we went and checked his times. As he walked back up I just said “Three!” He was quite confused and then figured out I was talking about 3rd Place. All three of us were going home with trophies! What a day!

Big ups to Amy and Joe who showed that hard work and dedication produce results. 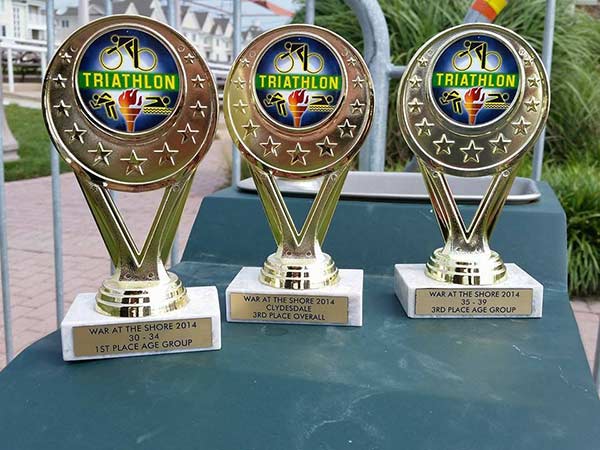 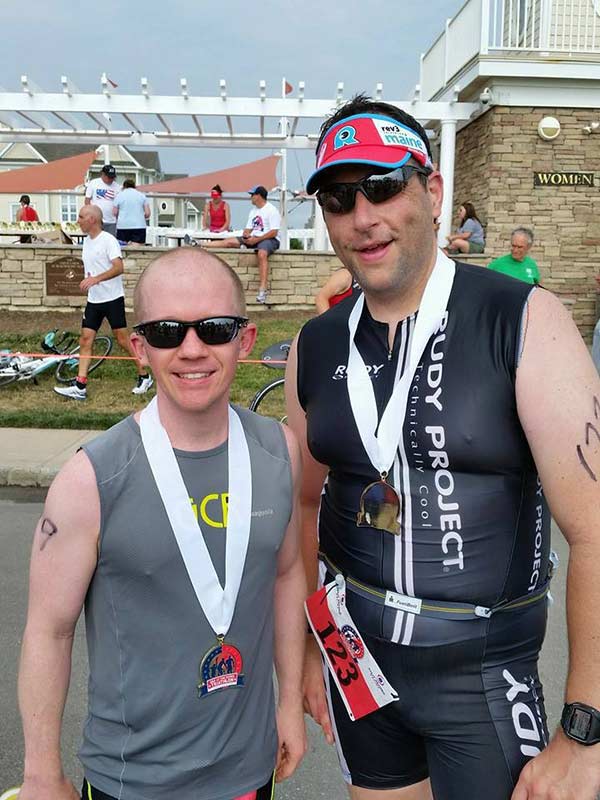 « What Makes us Happy
A Love Shared at The River Cafe »