I love the 5th Avenue Mile. For a few minutes you hit hyper drive, maxing out your breathing and heart rate and as soon as you think you are going to die, it’s over.

The day before I did an easy 5 miles and then headed over to Elizabeth and Juan’s wedding in The Central Park. It was beautiful, fun, and chock full of runners in civilian attire. That night I headed down to the Kitchen Hell’s) for some carbo loading with Maura, Aiden, Dennis, Bojana and Elyssa. Pasta and beer… everything the body needs to survive.

I took my time getting up since my heat wasn’t until 9:55AM! I even cleaned the apartment.

Dr. Levine has been doing an awesome job getting me back into the game. I have had 3-4 weeks now of zero knee pain during my 2-6 mile, easy tempo runs. I was excited to race and also very nervous as I had not done any speed work in months.

We live close to the start so it was an easy warm up over to where all the runners were converging. I immediately saw Erica. We caught up and did some warm ups before bumping into Elizabeth and Juan, dressed in wedding gear for the run! I ran into Joshie and a few of his Gotham City Runners who looked ready to rock. Finally, I ended up down 5th by 77th Street to watch the 2 heats before mine when a friendly voice next to me says, “Hey Baker!” It was Robert, who was taking pictures and running in the media heat (he works for Runner’s World.)

After watching a few heats I made my way back up to the start. My knee felt great and I was starting to get pumped.

This was my 4th time racing this puppy and I now have my strategy down pat. I lined up hard left and about 10 deep. The gun went off and it took 3-4 seconds to hit the start mat which I thought was strange.

There were a few guys in front of me running a lot slower than I wanted to. As soon as the gates opened up I busted out to the left and hit overdrive, flying last them my heart rate redlining. I saw Jess yelling at me at this moment and waved.

My strategy for the mile is simple, run as hard as you can. No watches, no pacing, no fear of pain. 5 minutes of hell.

The first 1/4 mile was going great, then I hit the uphill at 70th street making my way to the 1/2. It was hear that all those months of zero training took their toll. I was exhausted and thirsty and wanted to drop out bad, my pace slowing. I tried to ignore the pain.

Then, something miraculous happened. As I crested the hill and began making my way down the final 1/2 mile stretch to my left I heard Robert and Erica yelling my name! I perked up and gained some power, then to my right my step-brother Matt and step-cousin Meghan (in town visiting for the weekend) yelled at me, sparking yet another boost power surge! 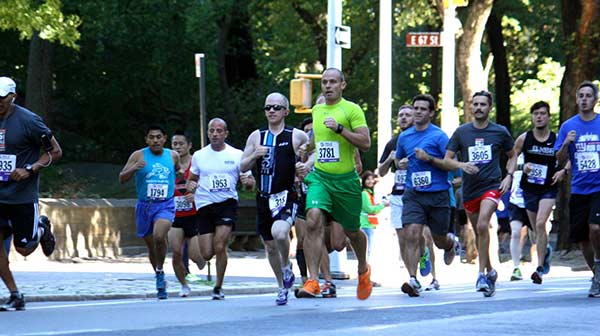 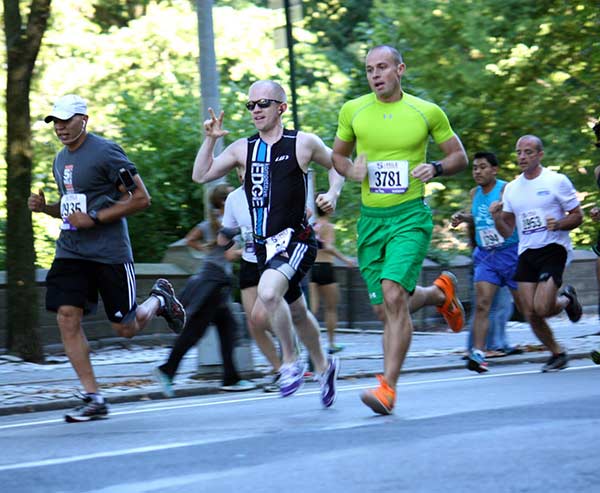 Finishing the race I saw that I was already over the 5 minute mark. I knew I would never break my PR of 4:57, but I was hoping to be kind of close. I crossed at 5:25, satisfied to  have raced and that the race was over!

I’m back baby! My wheels are good, I just need to get my engine back in high octane mode!

The rest of the day was spent with my Step-Mom, one of my Step-Brothers, Colleen, Meghan, Grandma Kitty, Jeff and Ali at a bar watching Sunday football. There was even a random surprise of Doug and Danika being in the same bar, so they hung out as well!