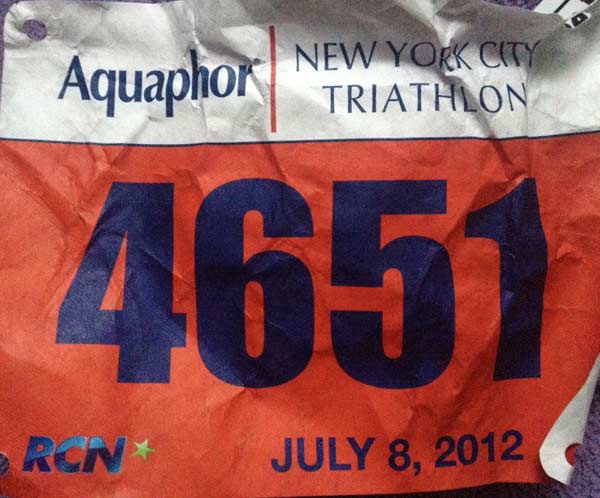 I wasnt going to race the NYC Triathlon this year because I forgot to sign up in time, but then the lead sponsor Aquaphor offered me a chance to partner with them. I have a hard time resisting a good race.

The night before the race we (Jeff, Ali, Cat, Abbe and I) headed to New Jersey to a huge family party put on by my Uncle’s girlfriend Cassandra. (Great party Cassandra!) My Uncle Bill was retiring to go back to school to get his Ph.D. and this was in celebration of both events. I am really proud of my Uncle Bill for making this decision, it’s very inspiring and so of course, Tri or no, I wasn’t missing the party.

As if that wasn’t good enough, my Grandma was a surprise guest!

So really, going to a party where you have no idea what food you will be eating and how late you will be out is risky business the night before an Olympic Triathlon, but hey, mix it up a little right? Also, family is really important to me.

I woke up at 6-6:30 and had some coffee and checked twitter to see where they where in the ‘heats.’ SIDENOTE: The NYC TRI has like 60 heats and it takes 2 hours for all of them to go. I estimated that I would be going off at 7:30-7:45 AM a full 2 hours after the Pros had started.

Some of you are saying, “Wait, Baker what about transition! How are you going to get your bike shoes in there?” Excellent question. My biggest complaint about the NYC TRI is how transition closes at 5:45AM and you end up waiting around for 2 hours. 2 precious hours where you could be sleeping! There is no way around this. Try sending off 3,000 swimmers down the Hudson at once and it would spell disaster. My solution? When I dropped off my bike the day before I just set up my bike/run gear then! Boom!A few friends were like, “Baker it’s going to rain tonight, your shoes will get wet.” Listen honey, after racing the entire Rev 3 Quassy Olympic in a cold downpour I have become immune to rain. I’m actually really happy about that because I used to be a baby about in-climate weather.

Back to the race.

I took a cab up to 96th Street at 7AM and had oodles of time. While sidelined waiting to go I hung out with my friend Ben. He was doing the race after breaking his toe a few months earlier. Props Ben!

It was now that I ate 2 bananas. These would be the only nutrition I would have aside from half a water bottle full of EFS on the bike. Less is more? I have no idea but it worked.

Soon it was time to line up for the plunge. It was hot out and I was looking forward to a dip in the mighty Hudson. The current was flowing something fierce and I wanted to get in before it reversed. FUN FACT: The Hudson River is not a river, it is a tidal estuary the ebbs and floods daily. Meaning, the current changes direction from North to South daily and vica versa depending on the tides.

As we neared the Start pier I got excited. It’s funny how just 2 years ago I was terrified, and now it’s second nature. In my head I like to say, “The Hudson… she calls…”

As I stood on the edge my group of racers was kind of blah. I looked up and down the line up and yelled, “Come on fellas! Lets have a great race out there!” at which point everyone erupted in cheer. Bravo.

The gun went off and we took the plunge. I started digging in immediately. My goal was to blast through the swim. It did not happen.

I started with great form. My sighting was on point. There weren’t too many people around me but my arms felt like dead weight. Immediately I thought about how much swimming I had been doing the last week and perhaps this was a side product. None the less, the show must go on. I pressed forward and just got it done.

Other setbacks? I have swum the Hudson like 15 times. Never ever have I swam it when it was so dirty. My hand kept hitting drifting trash like styrofoam cups and wood pieces. At one point I ducked underwater and swam under the garbage slick.

There was also this dude that was zig-zaging in from of me and I could NOT get around him. It was like an open water traffic jam. I think I even popped my head up and gave him a, ‘Seriously man?’ Look as we were side by side. 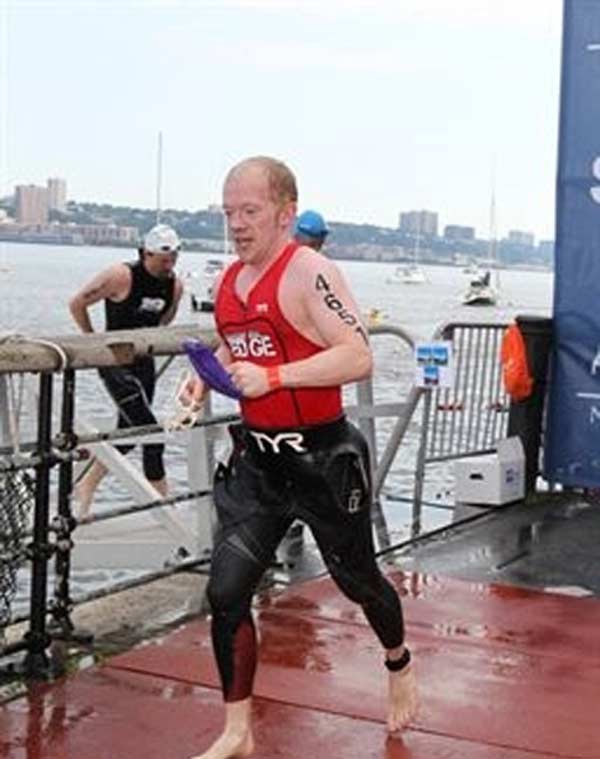 As you exit the swim there is a 400 meter dash to transition. Some people complain but to me, it gets your legs loosened up for the bike. I saw Erica and Lora and gave em a big “Heeeeey!”

As you run along they have this section of shower things along the straightaway you can run through to wash off. This one guy was taking his wetsuit off IN the shower area so people couldn’t pass through. I wanted to pass him a bar of soap or something.

As I approached my bike I had no idea what to expect. Remember, I hadnt been in transition since the day before. Arriving at ‘The Morrighan’ everything looked perfect. Tires full, shoes in tact. Let’s roll!

Speeding out of T1 I saw the gang again and gave them a funny face. Once out on the highway, it was go time. It was kind of congested so I took my time carefully passing people. It wasn’t until about Mile 3 when my legs were in check that I dropped the hammer and started plowing past people. 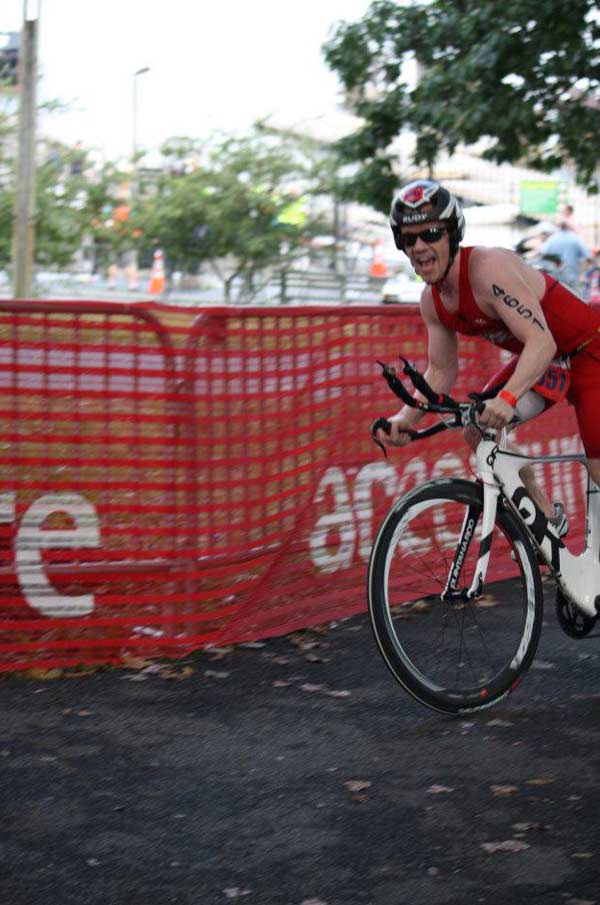 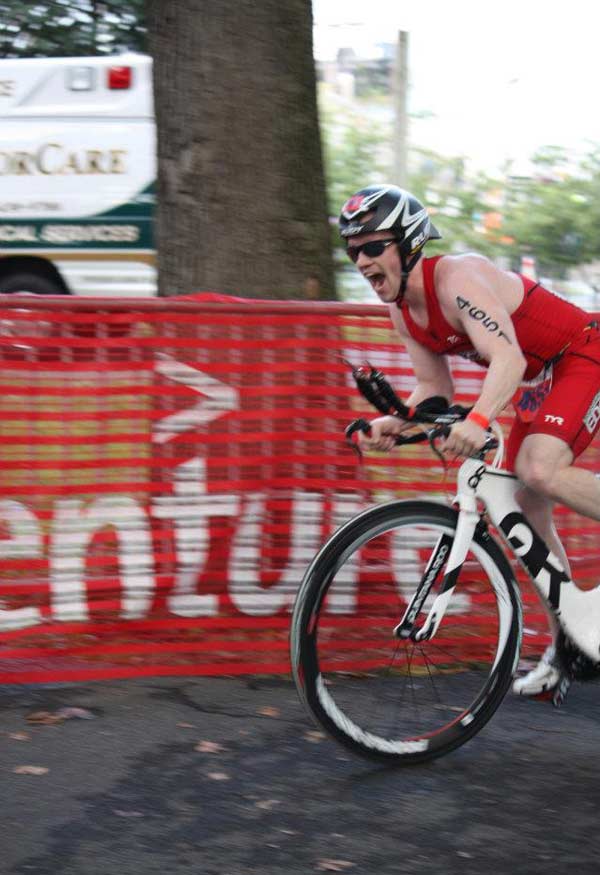 Thanks Erica for the great shots!

I was riding with 2 guys and we were leap frogging. I was really starting to have fun. One of the guys would pass a group of people and get like 200 meters in from me, then when an opportune time presented itself I would plunge ahead passing him and so forth. We weren’t drafting each other, just kind of flanking each other barreling up the highway. Dig it.

The course is an out and back with some long rollers. As we got up into the Bronx, Riverdale to be exact, I heard, “Yea Baker!!!” It was Sharon cheering everybody! Right on! 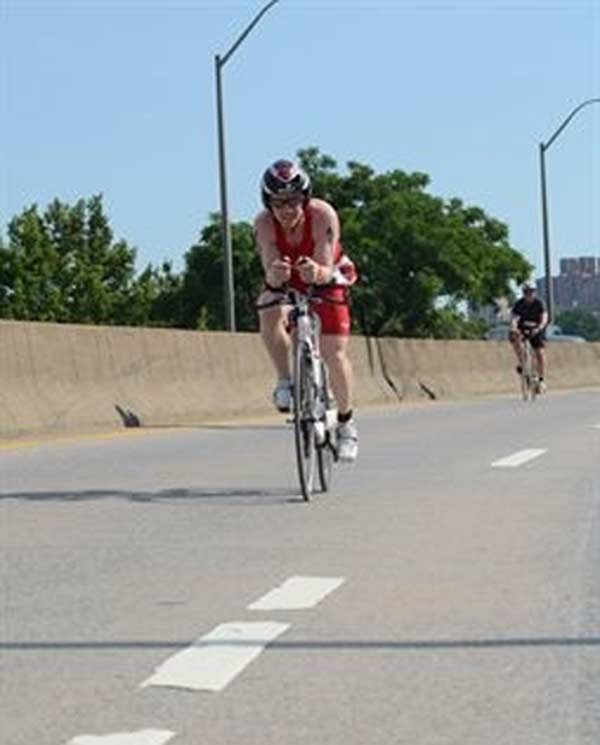 It was just past here I got very pissed off. I was on a tear now and in my highest gear, not concerned with saving anything for the run. On a downhill I was coming up on 2 riders and announced, “On your left!” As soon as I said that, and I was going way faster than him, he merged hard left blocking me and I had to slam on my breaks. Not cool at all. I let him go ahead as my heart rate cooled. The minute I warmed up again I jammed past him at top speed, furious.

The second half was even more fun. I don’t know how, but I got Scotty from Star Trek in my head. Every time I was in my fastest gear I would say (out loud mind you, in my own version of a Scottish accent) “Captain, we’ve got to to faster to break warp speed!” This seemed to push me faster in fact. Whatever works right. SO for the remainder of the trip I imagined having a conversation with Scotty and how we were trying to always break warp speed.

Heading back into transition I knew the run was going to be brutal. It was already really hot out and the sun was climbing high.

I immediately set off at a hard pace. I just didn’t care. I also had no Garmin on so I had no idea what speed I was hitting. This is a neat way to race. Not really conducive if you are trying to PR, but it makes the race about feeling, not numbers. 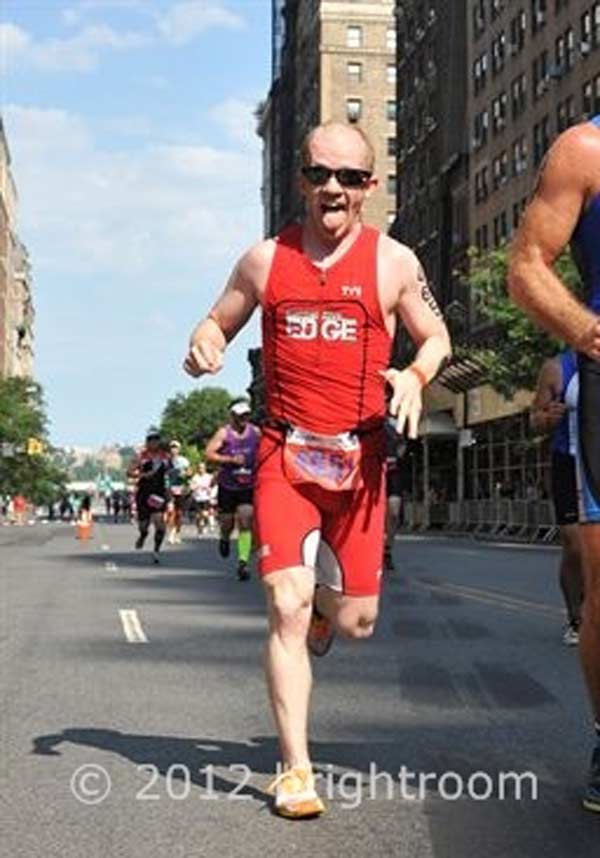 As we ran across 72 Street towards Central Park I was moving quick, but my legs were still wonky. It wasnt until we enter the Park that everything started coming together. I was taking smaller strides at a faster rate and passing a lot of people. To keep myself motivated I was hunting people in my age group.

At the Mile 1 aid station Matt6 was volunteering. I ran up to him yelling, “Bakeeeeeer! I made you the best Cytomax drink ever” We had a laugh before i pressed on. I also met a guy here who knew me from the Fire Island 5K races! Small world! 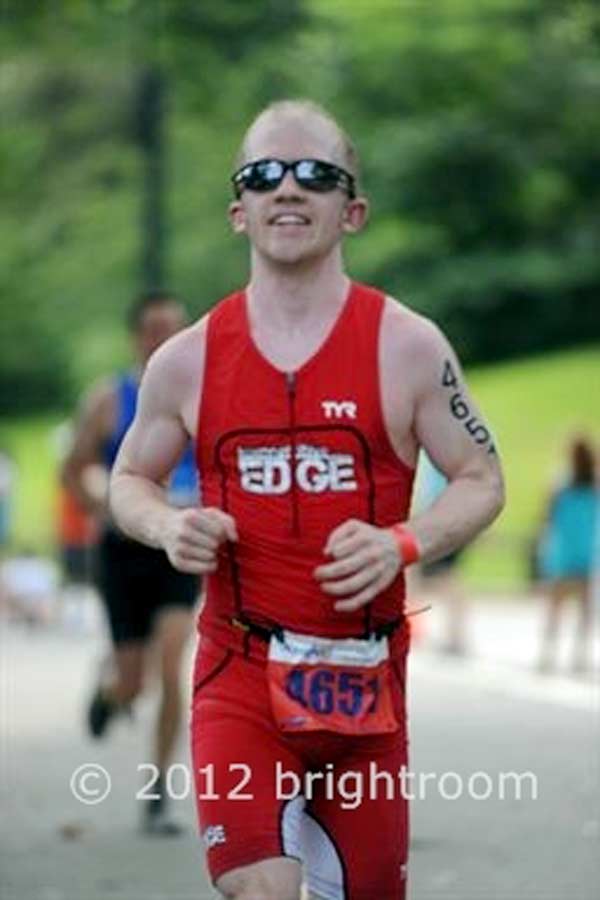 I think I was happy to have found shade.

Harlem Hill sucked, both of them. When you run Harlem Hill clockwise there are 2 uphills. No fun! Something interesting happened on the way down one of them. I was passing this big meat-heady dude and he said, “No fair, I’m like twice the size of you!” I was so annoyed that he was allowed into the race that I didn’t even know what to say. I felt like shoving him into the bushes… but I didn’t.

Things were real hot on the East Side of the Park. There was zero shade. At Engineers Gate I saw two familiar faces cheering me on, Eissa and Elyssa! 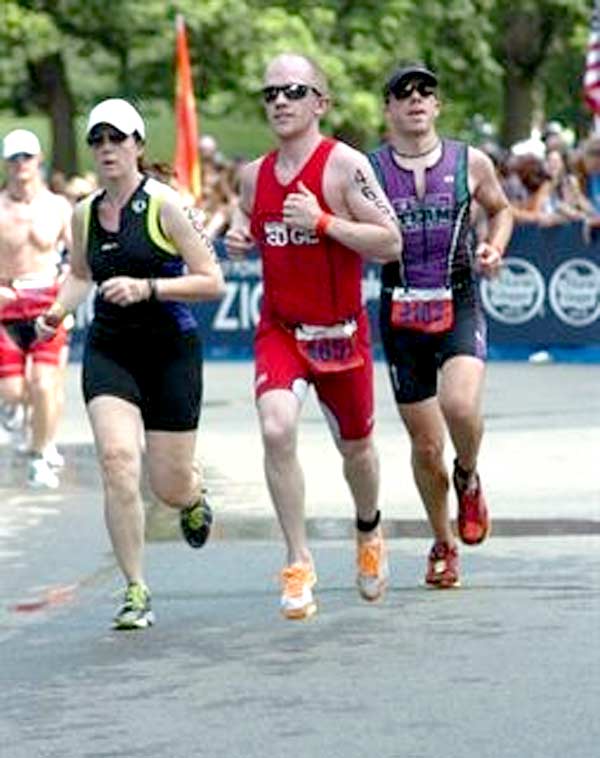 With 1 mile to go I was excited to be done. I had no idea what my pace was, I just kept chasing people. Up along Bethesda Fountain I heard Dani cheering me o then saw my brother Jeff and his fiance Ali! I gave them all high-fives, sweaty high fives! Then, I saw Abbe in the Finish chute!

I finished in 2:18 which is 1 minute shy of a PR. Had it not been for my swim I would have bested it, but there will be other battles.

After a few group shots Jeff and Ali departed leaving Abbe, Erica and myself to go get some ice coffee and muffins. What a fun start to the day! 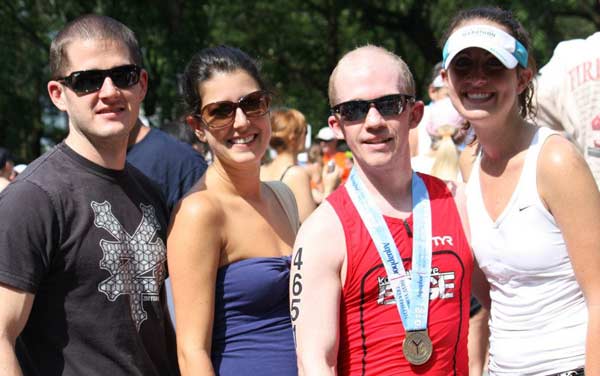 Big ups to my sponsor Kompetitive Edge who represent some of the best gear out there (TYR, Quintana Roo, Newton, Oakley) and support me with it! Also big thanks to the race sponsor Aquaphor for giving me the opportunity to race!

« Body Evolution
Evolution: how did you get here? »