My brother Jeff and I (he has been asking me to take him for the last 7 years) set off on the 7 Train around 6:15PM. We were pretty excited because we would get to see the #1 ranked men’s and women’s players.

Arriving right on time we fought our way through the slow moving crowds, grabbed some beers and found our seats. We were 5 rows behind the ref, right on the center line. 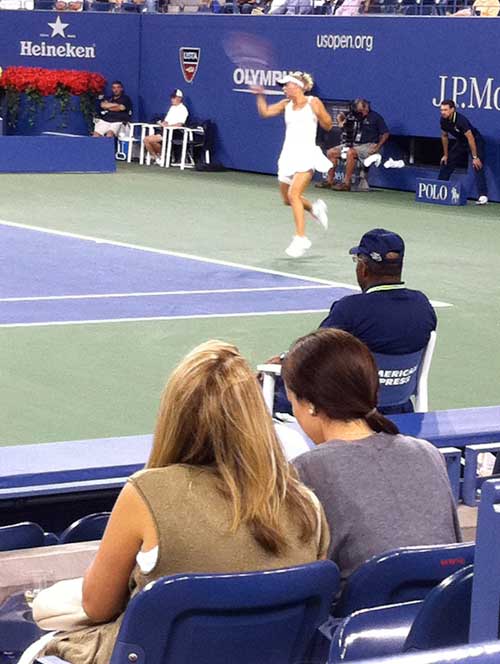 Wozniacki versus Rus started right on time. Rus looking quite young, Wozniacki could have been her coach or something. Rus held her ground for most of the first set, but then the endurance part of the game took over and Wozniacki started crushing it. She won 6-2, 6-0 graciously. 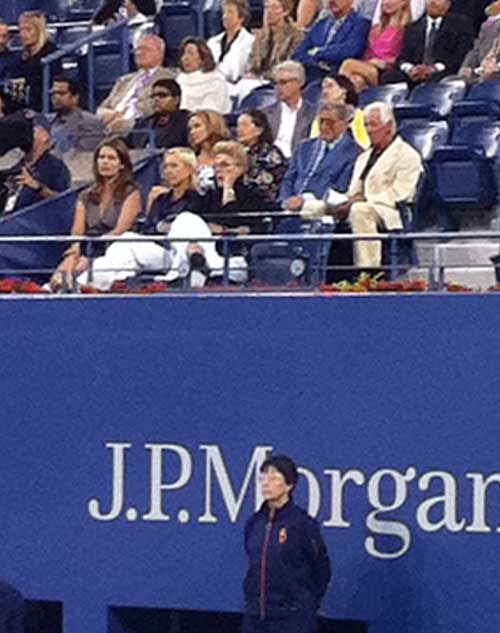 At this point the crowds started setting in and the Arthur Ashe Stadium was full. Just before the men’s match we had some celebrity sightings. Tony Bennett and Martina Navratilova were sitting up to our right. Who is the bigger star? My preference is Tony Bennett as I am a huge Sinatra fan. Crooners. 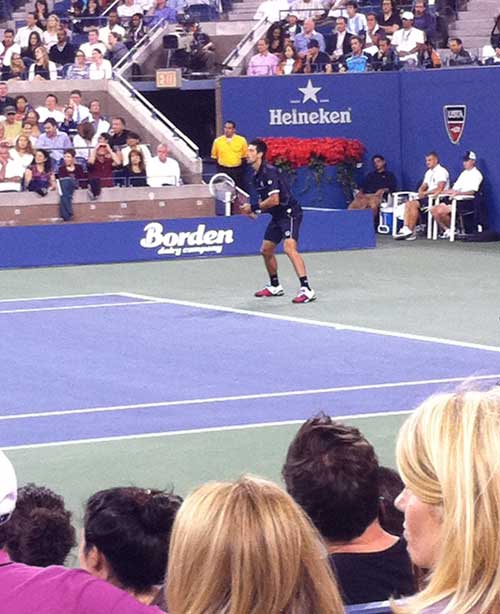 Djokovic came out looking pretty bad ass, I’m not gonna lie. He definitely looked like a force to be reckoned with. Berlocq on the other hand, did not. His plaid bathing suit bottoms and white ball cap didn’t really look very threatening.

It was at this point we realized Adrian Grenier was sitting in our section. I felt bad for him because all night, non-stop, people were taking pictures with him. He was very friendly and cordial about it though. Jeff and I were just excited that we had better seats than him. 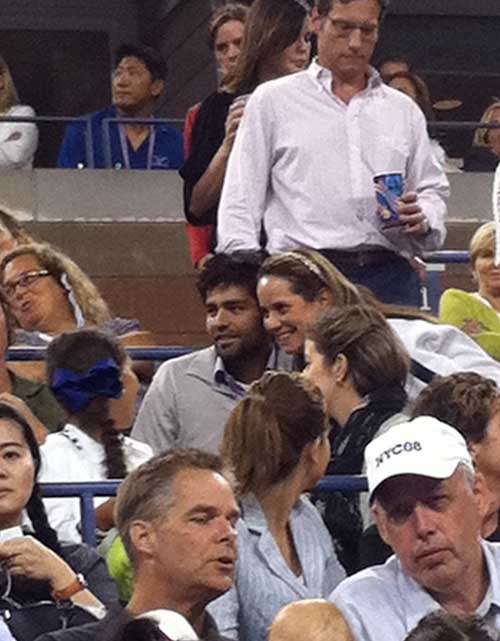 Back to the tennis! Djokovic set it off with a fury! This guy is totally amazing to watch. He may even be a runner as his speed on the court was off the charts. Poor Berlocq got dished a 6-0, 6-0 for sets 1 and 2. The crowd was really pulling for him though and every time he did something good, we cheered.

During the last set Berlocq managed to squeeze in 2 points before Djokovic finally finished him off. It was the shortest match I had ever been too.

I woke up to run a loop in the Park today. As I was running around there was this insane bike race going on, the World Police and Fire Games. The different pelotons kept passing me over and over again, maybe 5 or 6 times. It was really exciting.

So then, as I am rounding the south and coming up on Summer Stage I hear familiar music… it was Mary J. Blige singing ‘Just Fine’ for the Good Morning America Summer Concert Series! I got to hear some Mary J. at the end of my run, it was so cool.

Then, I am finishing up my loop right behind the Met when I come running into all these crowds and people start yelling at me, “The race is finishing, here they come!”

I pull over and look back to see a lead motorcycle whiz by followed by the lead guy who had 20 seconds on the peloton. The exciting part was the 2,3, and 4 positions full-on sprinting it out to take 2nd place! They were going so fast and I really thought a crash was inevitable, but they were no joke.

What timing I had today! Such a fantastic way to start a Friday.