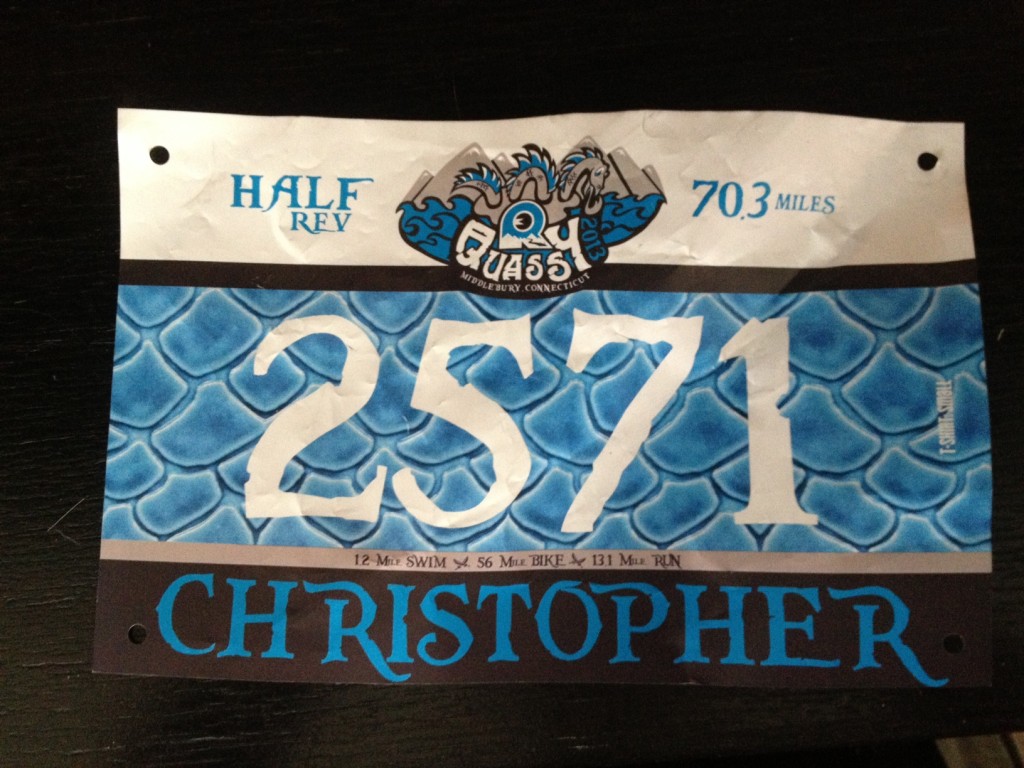 My first triathlon of the season was to be the Rev 3 Quassy Half Ironman.

I met Jim from ‘Dad Posse’ at his place around 3:45 on Friday. After packing up the gear and loading the bikes I was told, “You’re driving, I have to do some work.” Sweet baby jesus! The last time I drove an automobile was 1 year ago at the Reach the Beach relay, so although excited, I was also nervous. 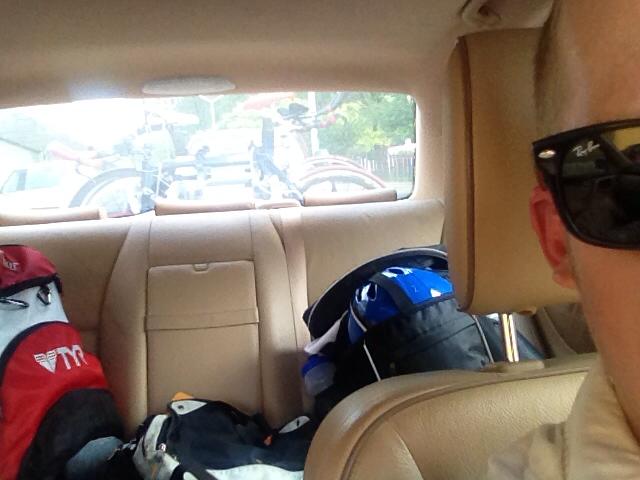 I don’t think we broke 20MPH for the first hour of the trip. How anyone commutes in a car in the Tri-State area into Manhattan is a mystery to me. I would be a mess. We even saw an old man crossing the street almost get whacked by some crazy guy driving like a bat outta hell. Everybody, lets just take a deep breath and bring it down a couple notches. It’s gonna be alright.

On the ride up I decided that I would attempt to switch from the Half to the Olympic for a few reasons. Many of you know I have been going to PT to fix my knee tracking issues. It has been successful, but I haven’t run over 6 miles since February. I have raced the Half at Quassy before and really had nothing to prove anyway. You’re crazy if you think you can PR on those hills. The rest of the gang (Jim, Mike, Gio and Ann Marie) were racing the OLY so it would be a lot more fun to race with the group.

Big ups to Revolution 3. They put on a fantastic race every time and this weekend I got a taste of their ‘behind the scenes’ service. The gal in charge of registration, Kelly, informed me that all I had to do to switch races was get a new swim cap and tell the timing people. She gave me my cap and then another gal at timing queued up their computer system and swapped out my info. Easy! (I did of course take a hit monetarily as the Half was slightly more expensive, but that’s fine…) 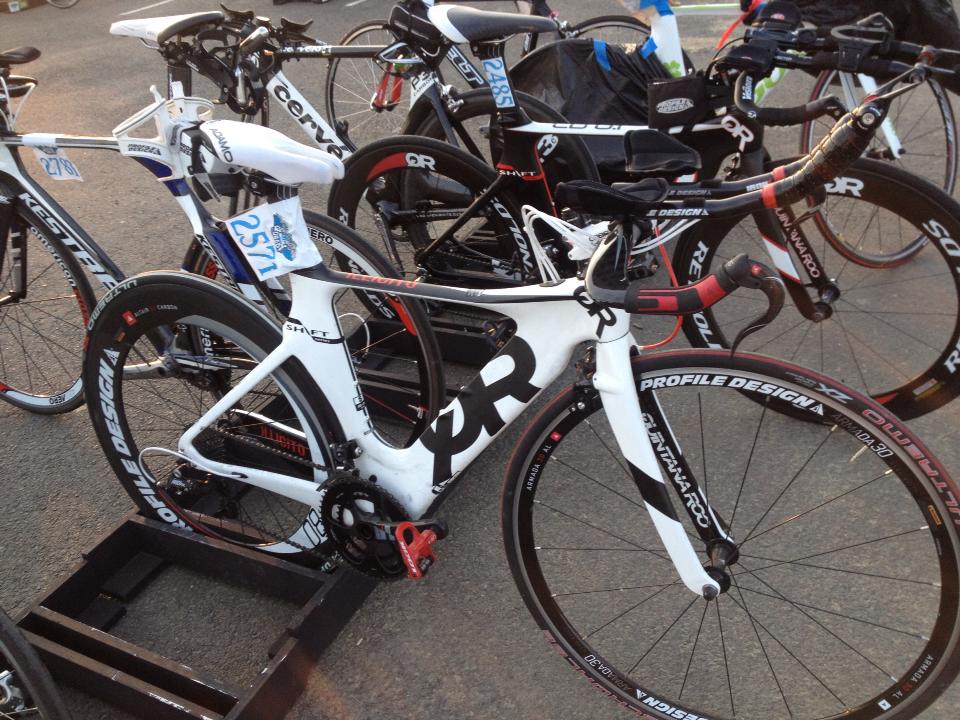 My spaceship – ready to fly.

We left the race area and headed toward Waterbury, where our hotel was and where we needed to pick up crucial supplies. We stopped at a Riteaid. Jim and I were laughing at how ‘laissez-faire’ we had gotten. Both of us had no food for the next day. So… I picked up some microwave oatmeal.

After stocking up on goods, Mike, Jim and I headed over to City Hall, the restaurant where we ate last year. Sure enough, there was live music in the outdoor area! I had my staple, Shrimp Scampi and a couple beers. My allergies have been kicking my ass this week so I was not in my usual ‘stay up late the night before a race’ mode. Therefore, we were in bed by 11 or so.

I had the strangest dream where I awoke at 3AM (with 2 hours to spare) and met my friend Alex. We went to Art College together, MICA for those curious, and I was an Art History minor. Alex took me to some architecturally famous church that we toured for an hour or so. I told him at 4 that I should probably head back to the hotel so I could grab an hour of sleep before the race.

I REALLY woke up at 5AM and I felt awesome and ready to rock. The gods smiled upon us this day, as my thoughts trailed back to the 2012 race where it was 45 degrees and a torrential downpour. On this morning, the sun was shining, and no matter how hot it might be I was happy.

It took me roughly 5 minutes in transition to set up. The rest of the time I just spent eating my oatmeal and smiling, chatting with my neighbors. Since being injured I have been practicing a very different philosophy called, ‘Nothing to lose.’ It’s all about ego and practicing it on a super challenging course like Quassy is perfect.

In the last 4 months all I have wanted and wished for was to run again. Not just run, but run with heart like an animal. Today’s race would see how I had progressed, with my PT 2 times a week and running maybe 4-6 miles at a clip. I was excited! So ‘Nothing to lose’ means simply, be happy you have the ability to race, no matter what the outcome. Try it.

After a quick practice swim in the PERFECT water (it was 68 degrees and drinkable as far as a New Yorker is concerned) we hung tough on the beach. I watched Jim, Mike, Gio and Anne Marie go off. I started 10 minutes after them which was kind of cool because for me it meant 2 waves wouldn’t be swimming over me half way through.

Gun goes off and I’m dead middle. I start my swim the most cool and relaxed I have ever started a swim. Chilly Willy… focus on form. I did just that for the first 1 third. I had a few folks busting into my space but this crowded swimming stuff doesn’t phase me anymore. I pushed a few people away and just kept my face guarded from any kicking.

As we rounded the first turn buoy all hell broke loose. It was like 100 people getting lost at the same time. We were swimming directly into the rising sun, a seemingly romantic proposition for a heroic tale like Odesyus. I could see nothing but a giant blast of light, blinding me to the affect of having to look away. “Fuck it.” I said and just followed a bunch of feet.

Imagine the swim course as 3 sides of a square, we were on the middle of the parts and personally, I was slowing down without definite direction. I am really good at sighting, but that slows you down as you have to lift your head out of the water. So, if you have no idea if you are headed the right direction, sighting takes place more often and form goes to shit.

At the second turn buoy I had to bank hard left to make it. I had cut too far inward and now had to make up the difference. Very similar to when I swam from Alcatraz and almost got lost at sea, but this time we were in a docile lake.

Finishing up the last third of the course I knew my time wasn’t my best but guess what, I was racing and that’s all I cared about. 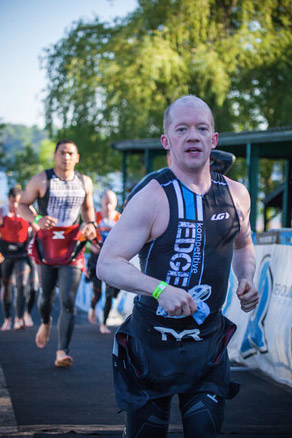 Running up the chute some young guy looks at me and yells, “East 83rd Street baby!” I looked at him, puzzled, and said, “Hell yeah, represent!” Before my current and very permanent East 93rd Street locale, I had lived on 83rd Street.

T1 was smooth and I was on The Morrighan (aka: Quintana Roo Ilicito) in no time and very happy. I love biking and really just wanted to enjoy the ride. It took me awhile to warm up but I was soon aero and gaining on my competition.

Right around mile 1 I came across a familiar bike. It was Mike! He was racing his first ever OLY so this was a big deal. After a quick exchange I realized he was in good shape and he urged me to carry on. And so, I did.

If you have ever raced Quassy (this was my 3rd time) you know that the hills are unrelenting. There are basically no straight aways. Its a 5MPH uphill stretch (your lowest gear) followed by a 45-50MPH chaotic downhill. Rinse and repeat. Can you maintain the stamina to run off the bike? I saw many who could not later on, only because they pushed too hard on the bike.

The course is beautiful. Rolling hills (which I have already mentioned) and stone walls, old farmhouses… it’s picturesque. If only you could be on these roads in a vintage Lincoln Continental and not a human powered bicycle. I really watched myself on the biking due to the knee. I pushed it, but at a 75% level, all smiles. 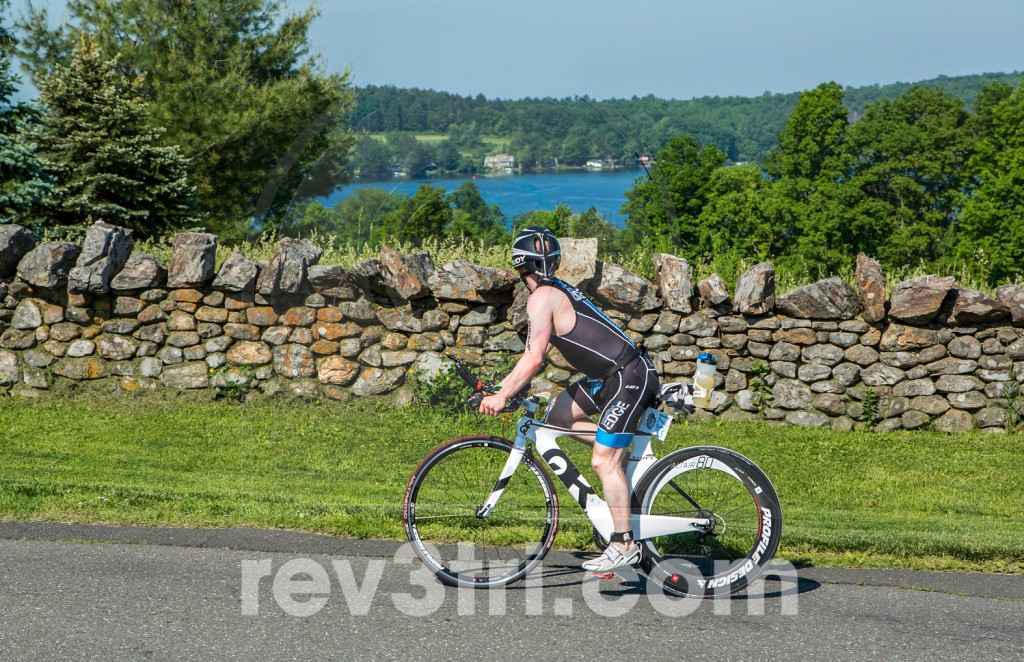 25 miles happened fast, but I was right at the point where I was ready for it to be done. The beauty of the Olympic Distance.

Millions of thoughts pouring through my head as I transitioned. “How would my knee feel racing, not running. Would I have to bow out at some point. Was there a beer tent at the finish?” All of these important factors.

Right around Mile 1 I saw a familiar face, it was Jim! Do not be fooled by Jim, he is a sick athlete. I may have him on the run, but he crushes me in the swim and the bike is always a toss up. We chatted politics and what we were going to eat later before I headed out. 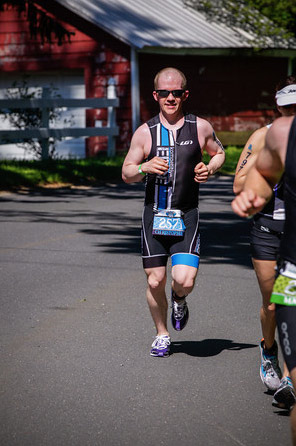 I was running naked (in fact the whole race) so I had no idea of my pace. Sometimes it’s good to go out like that. I always think to myself, “What did Dave Scott do?”  They hardly even had color TV let alone satellite watches. Sometimes you need to throw science out the window. Whatever happened to just setting it off and going for it anyway?

That’s what I did on this day. I wasn’t breaking any records BUT I hadn’t run that far in the last 2 months. Having a watch on would have totally bummed me out, instead I just hung on for survival as it was 95 degrees out. Every mile just clicked off. At every water station and poured water down my shirt and over my head. 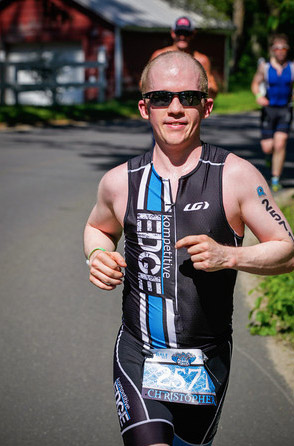 I walked none of the brutally challenging course, holding onto my breath and my mind. It was hard.

Finishing the last mile I thought of Sonja, who had coached me through my first 2 Ironmans, a friend and also a warrior. “I owe her a little homage.” I thought. Sonja does these awesome jumps at the end fo her races, so I decided I was going to do that in honor of her.

Rounding the finish chute I let some of the guys in front of me get ahead and pass (totally unlike me!) With a clear shot of the finish I busted my aero move, only to find out it worked! 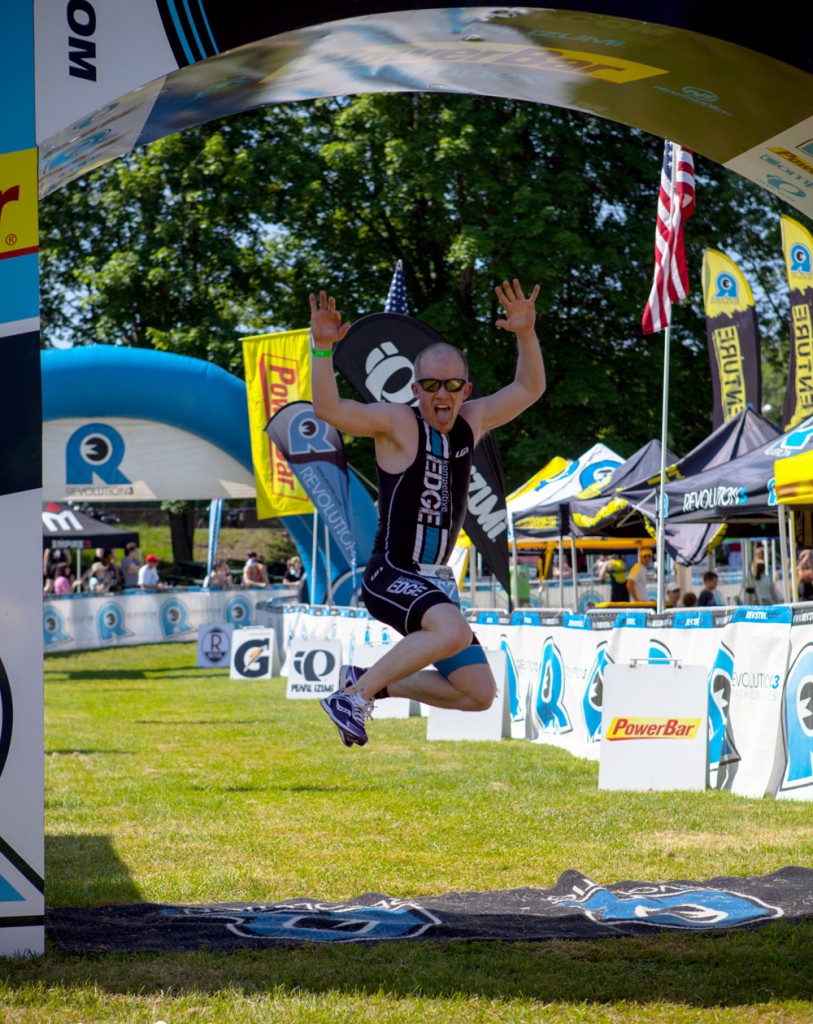 Satisfied, I rolled to the picnic area to find Gio and Anne Marie. We waited for Jim, then Mike, then we parted ways. Mike and I went back to the hotel to get cleaned up in a record 20 minutes. We left shortly after to return to mighty Manhattan.

Congrats to all my friends and teammates who competed! Big thanks to Kompetitive Edge who hooked it up with the amazing new Tri Kits! 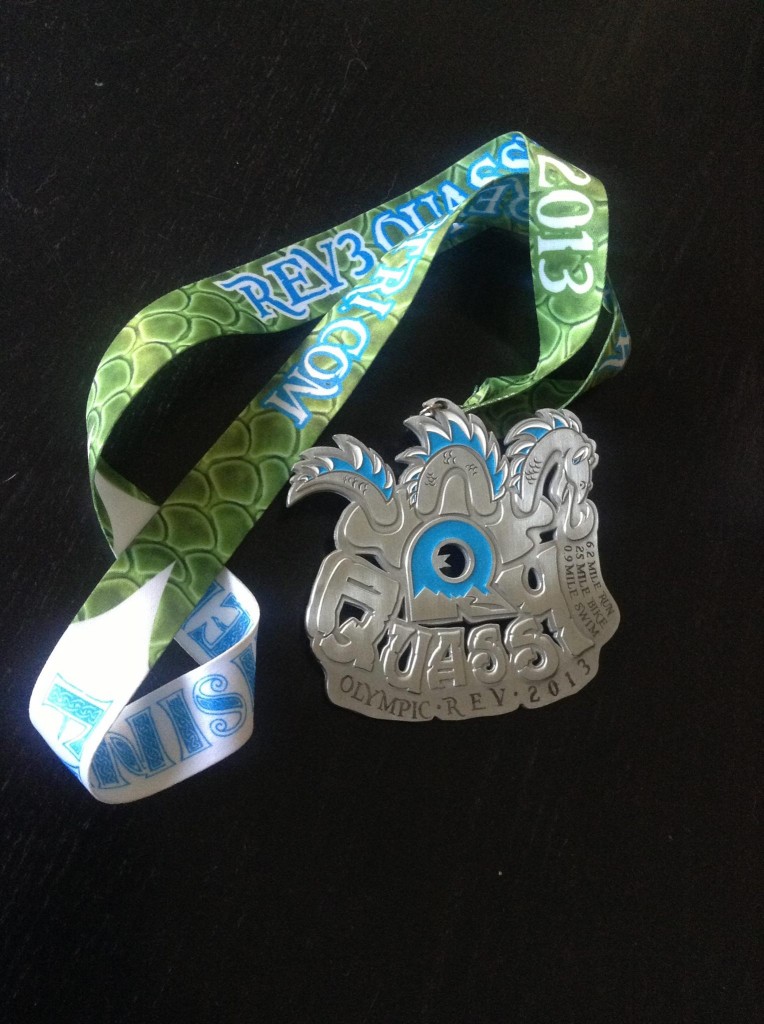