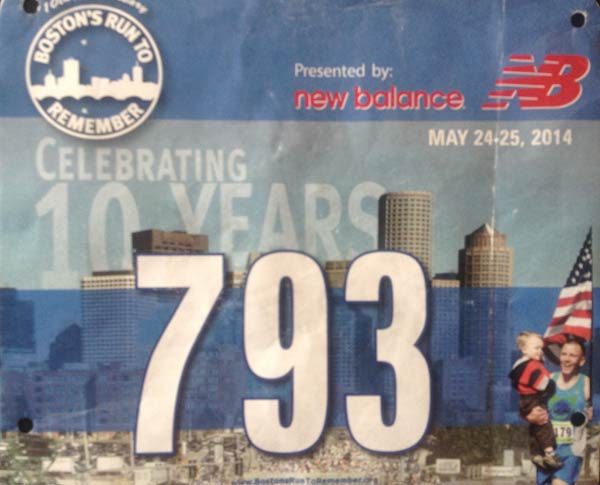 Abs n I caught a late afternoon train on Friday, barreling due north towards Boston. I love train rides. You can bring your own food and beer, plus the odds of a crash are pretty low. There is also something timelessly romantic about train travel.

Arriving in Beantown we noted that it was a bit cooler than our weather apps had let on. This would be helpful for Sunday.

Abbe works in the food industry so she is always looking for cool places to go. She heard of this place Uni, where head chef Tony Messina set up an intimate sashimi bar.

We sat at the sashimi bar where Tony himself was at work. He had a small, but expert team, of people preparing sashimi at lightening speed and accuracy. It was great to watch.

We had the chef’s tasting menu, on his recommendation. Being a traditionalist, I have to admit that I was skeptical at first. As the first amuse arrived, a non-alcoholic tomato water martini with caper berry, my skepticism was swept away. For the rest of the night, dish after dish, I was blown away by Tony’s combinations. One of my favorites was the Smoked Uni Spoon (Sea Urchin, Maine) Quail Egg Yolk, Osetra Caviar, Chives. Without going through each of the 15 dishes I will let the photos speak for themselves. It is rare that I am totally amazed by a restaurant, but it is as if Tony has invented a new way to view food. I highly recommend stopping in. 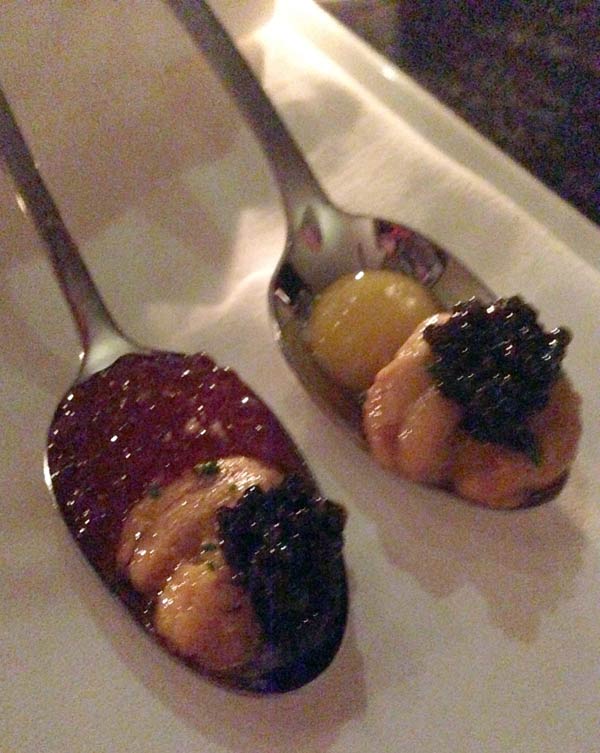 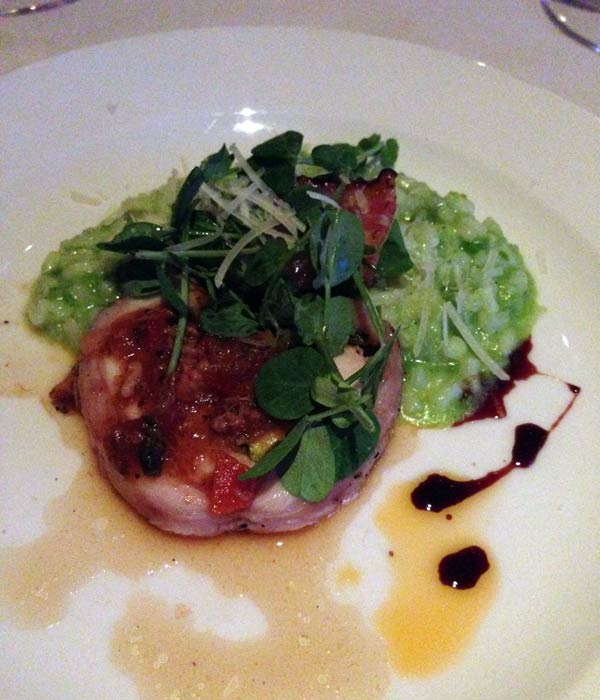 Back at the hotel we met up with Jessica, one of Abbe’s best friends who had flown in from North Carolina for the race for some cocktails.

On Saturday we first walked to the expo, which is in the same venue as the Boston Marathon, to pick up our bibs.

Since we had all day in Boston we played tourists. We all love history and so we decided to walk the Freedom Trail. It was awesome, not only historically, but also as a great way to see the city. Some highlights were seeing Paul Revere’s home and the Old North Church. We even had lunch at the Green Dragon, a place where Paul himself hung out plotting against the British.

We lounged around Boston Common for awhile before heading to Cheers for a drink. My Dad loved that show and watched it all the time when I was a little kid, and so it was a bit nostalgic. 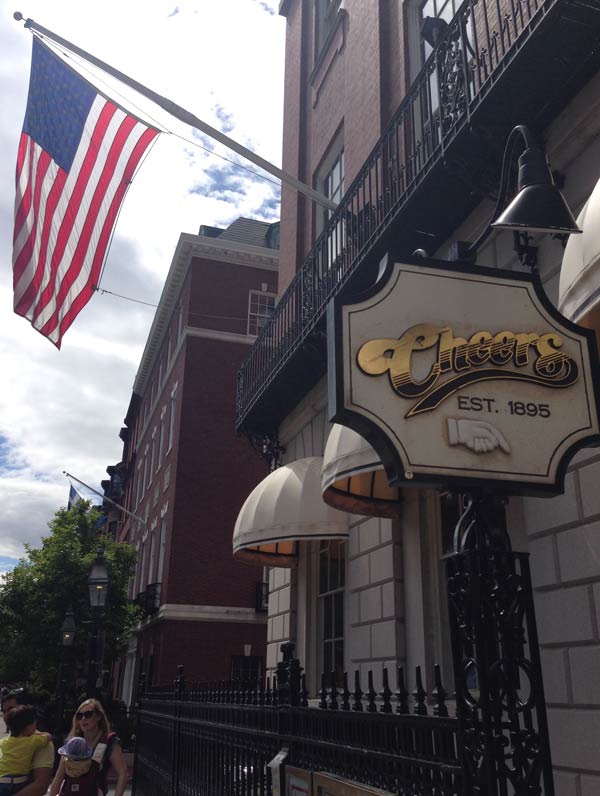 We decided to go chill back at the hotel until dinner. I have a hard time ‘chilling’ so I went to the hotel pool and did laps. I got in about 3/4 of a mile before my time ran out and I needed to get ready for dinner.

Our next food adventure was at Scampo in the Liberty Hotel. Italian (of course) as we had to carbo load! We once again got to meet the chef and some menu advice. The highlight of the night was mozzerella with king crab, cocktail avocado & green mustard oil. It was nuts! I choose garlic and anchovy pizza as my main and was not disappointed at all. Once again, I highly recommend stopping by Scampo if you are in Boston.

Woke up quick, at about noon…

I was really up at 6AM, after a night of weird race dreams where I was late to the start. Our hotel practically overlooked the start so we had loads of time to get there. Still full from the dinner before (a great sign on race day) I housed a banana and cup of coffee and was ready to go.

Weather could not have been more perfect. 55 degrees, overcast with a light breeze.

There were no corrals at this thing so I just stood around at the front. The Boston Police had their pipes band there and they did a rendition of Amazing Grace that brought chills up my spine. Run to Remember is a tribute to all fallen police officers. I had a few friends who work for the NYPD back home and so this tribute race felt right.

The gun went off and we blasted into a speedy frenzy. I was running naked again (no watch) and so just ran at what I felt a reasonable pace. I had no expectations going into this thing. The only thing I wanted to happen was to not have a ‘bad’ race. 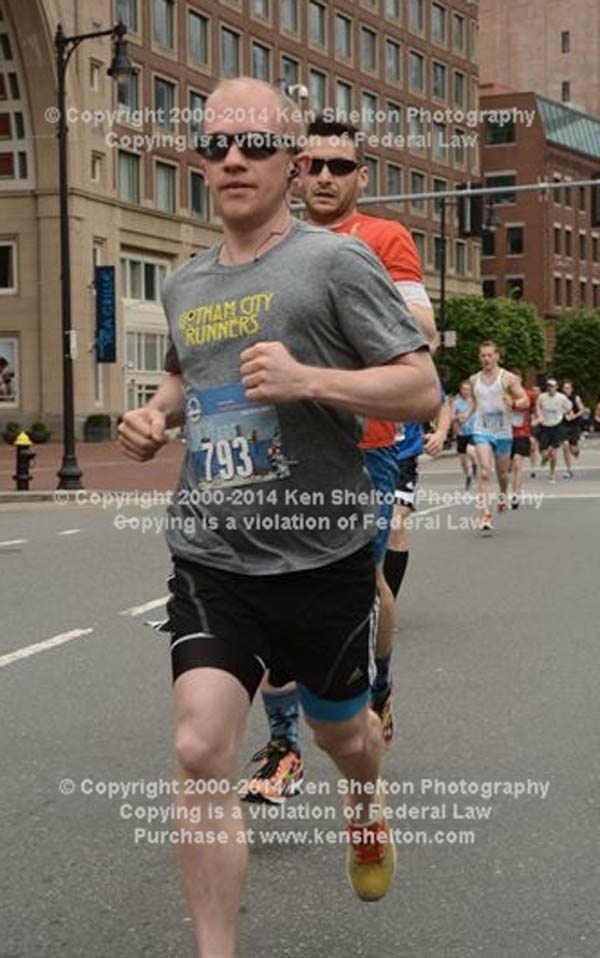 At mile two the clock said 12:10 which means I was going way too fast.

We were running through the historic downtown area and it was very cool passing all the monuments. Miles 2.5-4 had this crazy straightaway stretch. I just put my head down and ran. By now we were in single line race formation and spaced out around 15 feet apart. 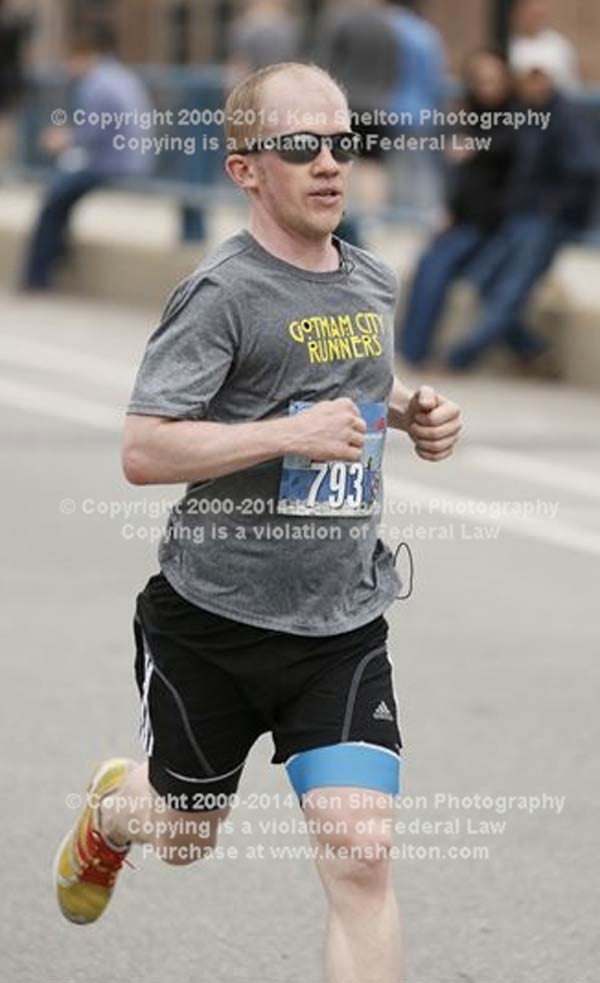 We hooked a right and cruised over a bridge toward MIT for the 5 mile out-n-back along the river. Once over the bridge runners took a right, ran for a mile then turned around headed back toward the bridge but kept going another 1.5-2 miles to another turnaround point. At the first turnaround I was exhausted (similar to Brooklyn the week before) but saw that there were not that many runners in front of me. Cool! 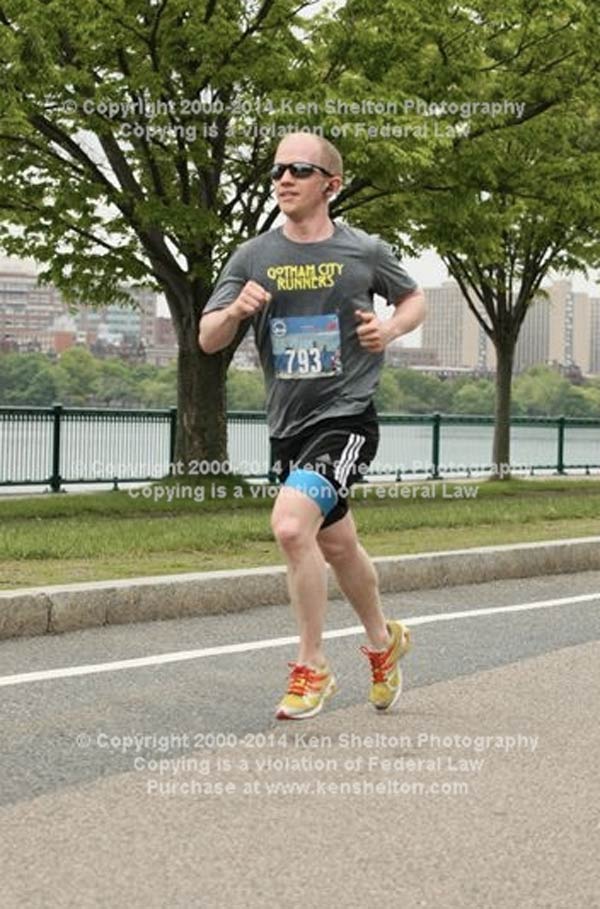 As we headed back toward the bridge I got to see Abs and we gave each other a wave!

Past the bridge we ran past around 2 squad cars, all flashing their lights with the officers in front, representing all the districts on Boston Proper. I gave salutes to all.

Finally, we reached the last turn around point. It was here that somehow, someway out of nowhere a new surge of energy came my way. I started passing people with renewed zest! That’s right, I had zest! I even saw Abbe again!

The miles were ticking off quick. Soon, I was crossing Harvard Bridge back to Boston.

My nutrition was spot on too. I didn’t even have any Gu. So meaning, my meal the night before of garlic and anchovy pizza was perfect.

I rocked through the last 2 to 3 miles and it was kind of a blur. I was using my old mantra, “There is no pain, only glory” and it seemed to do the trick. I was overriding all thoughts of fatigue.

The last straight away back over the bridge is a doozy. It seems like 1/4 of a mile but it is actually closer to a mile. 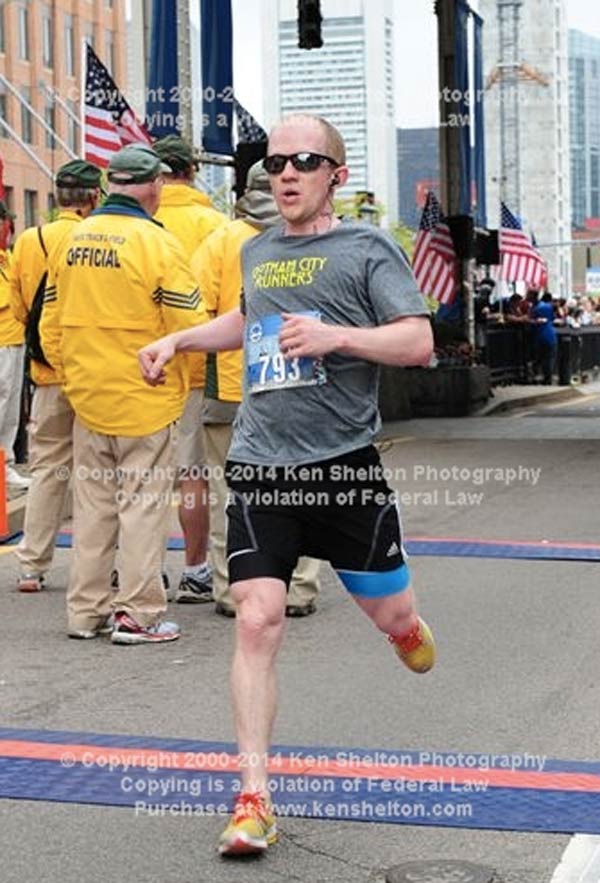 I finished in 1:22:45, which was 1 second faster than the Brooklyn Half last weekend! How weird is that!

I grabbed my medal and then went to watch Abs finish. While doing so I heard, “Chris?” It was a former coworker from Rolex who happened to have family running too. Small world!

Abbe, Jess and I hit the hotel to shower and prepare for lunch at the Barking Crab. 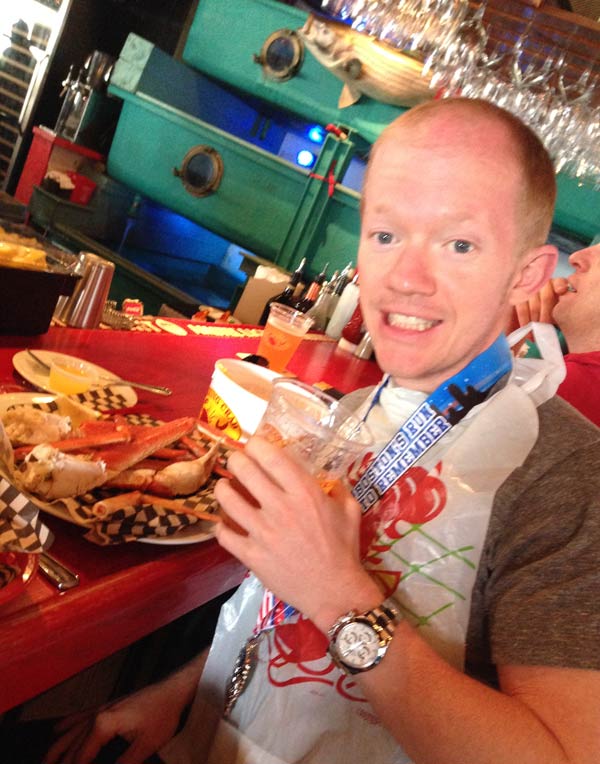 What is the Barking Crab? Only my favorite place in Boston, that’s all. Seafood meets outdoor bar meets dive bar meets beer equals fun. I housed a set of crab legs and a few beers in celebration of being 1 second faster than the weekend before. I’m kidding, I celebrate any race just because it’s a celebration of being alive.

We hopped a late afternoon train outta there back to mighty Gotham. 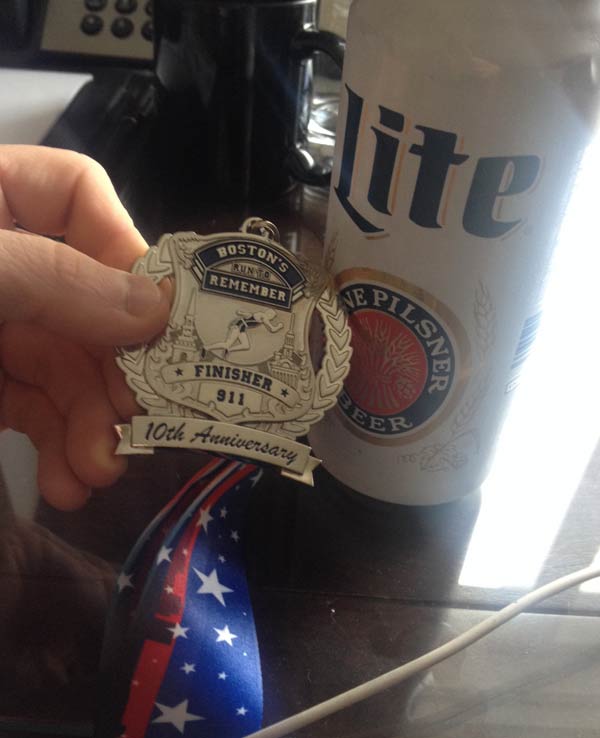