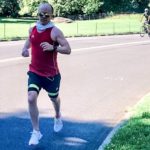 If you had told me a year ago I’d be experimenting with virtual races I’d tell you to take a hike.

But, I am such a sucker for good race swag. The NYC Triathlon (my all time favorite race ever even though it’s so stupidly expensive) sent out an ad for their virtual Duathlon that comes with dope swag… so yeah, I signed up. It was also very cheap in comparison to the actual race.

Here’s the skinny; run 1 mile, bike 25 and then run another 6.2 miles at any time between July 11th-20th. I was going to do the legs of the race back to back, as if it were an actual race. I say that because you had the option to spread out the legs over a few days, which I thought silly.

During COVID lockdown I have been training a lot (mainly running and biking daily) and am in pretty good fighting shape. What else is there to do really? I have not however, done any brick workouts in preparation for a triathlon/duathlon so there was going to be a good chance for ‘baby giraffe legs’ after the bike.

I decided I would execute the race on Sunday. The weather looked to be okay, hot but not crazy hot like it’s been.

The night before I went out to eat on Second Ave and hit a Greek spot. Were this to be a more serious distance for me, I would have opted for a more Italian type meal, but this would be fine. Greek food can also be heavy and have that ‘stick to you’ quality I love in a pre race meal.

The thing about a virtual race is that you can start whenever! You want two cups of coffee pre race, do it! Feel like watching the news until 11am? Lovely. Fix that leaky faucet in the bathroom? It’s your world baby, go for it! I think I left for my 1 mile run at 7:30 or so?

I ran down Park Avenue to 83rd and turned around (in NYC every 20 blocks is a mile and I live on 93rd Street). I felt like I was moving but in reality I was only clocking 7:30-7:45 per mile, which wasn’t my intention setting out.

I crushed a banana and then hopped on my tri bike for the 25 miles/4 loops of The Central Park. It felt good, per usual, to get on the bike and getting moving, wind in my face. For fuel, I had 2 bottles of EFS and no solids.

As I entered the Park slowly I waited until a point I had mapped out that would get me to 25 miles (not 24, as 1 loop of CP is 6 miles). As I got to that point I hit my watch and then exploded into race pace. I’ve never done this before and it felt a lot like auto racing and very fun.

I tackled all 4 loops in similar fashion and had no deterioration in speed or pace. I was going all out on downhills and flats and then dropping to easy gears and watching my heart rate on the uphills. I was also having a blast, but also being safe as it was busy. I know that there were also a number of people doing what I was doing, but there was no way to tell. So… I just imagined everyone biking to be a competitor I had to pass.

I did take note that there were a number of Empire Tri Team members out doing the race looking strong!

I stopped to meet Abbe at 100th Street on the East Drive (where I had plotted my 25 miles to end). She had my sneaks and other items laid out nicely for me in T2. I changed shoes, sprayed on some extra sunscreen and bolted off. My legs were immediately jello! I haven’t experienced that in a while and it took a solid 5 minutes to shake it off.

I was really happy to get Harlem Hill out of the way at the start.

As I rounded the bottom of the Park I was still feeling peppy! I just kept those legs moving.

One thing that was challenging was the lack of aid stations. Had it been a greater distance on the run I might have planned some secret drops.

As I came up to The Gates (which any NYC runner knows is a straightaway) I tried to keep my pace maxed out. I was really close.

I finished in 2:06:13 which I guess is okay? This is my first virtual duathlon so I have no idea and no personal benchmarks to go by.

Wait, that means it was an automatic PR right!?

I did however, take my book and go to my local pub Third Ave Alehouse for some lunch and a few drinks. My friend Myles alerted me that he was out as well doing ‘to go’ socially distanced drinks in the hood, so I met him for a few after.

Is virtual racing wierd? Hell yea. Is it all we have right now? Yes, so I’ll take it. I miss the competitive edge of it all though I will say that. Chasing actual racers down, maybe winning some hardware, and drinking beers in gross race clothes with fellow athletes is what I live for. I have faith in (most) of humanity that we will get back there soon, we just need to get our shit together.

Keep training for battle. Baker out.