I chose to not race this year’s Queens Half Marathon based on my experience last year. Basically, it was hot as hell.

This race happened to fit perfectly into Abbe’s Chicago Marathon training plan so she signed up. (I did warn her of the heat though…)

The night before we went out for her to carbo-load. I carbo-loaded cause that’s just what I do. Especially since Coach Sonja has me training 24/7 these days. It’s a really strange feeling knowing you will be going to a race, but not running it. It’s very… how should I put it… ‘peaceful.’ I was stress free and could go to bed at any time!

The next morning I woke up like 45 minutes after Abbe, cause I could! There were no D-tags. No pinning a bib onto my shirt or making sure I had a hearty breakfast. It was amazing!

We took a cab out there since the 7 Train wasn’t running and I got her to the corrals right on time. After saying goodbye and wishing her luck (I was also supposed to pace her in the last 3 miles) I set off and changed into my spectator clothes.

In my mind I smiled and said, “This is Chris Baker reporting LIVE at the Queens Half! Say tuned people!” I sought out the best place to watch the start and found my perch right in front of the giant globe fountain thing-a-ma-bob. The runners would be coming right at me before veering ti the right and there was no way Abbe would miss seeing my cheers. 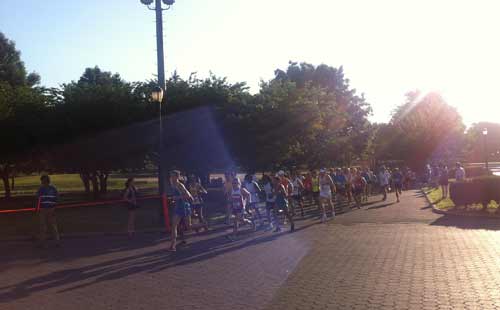 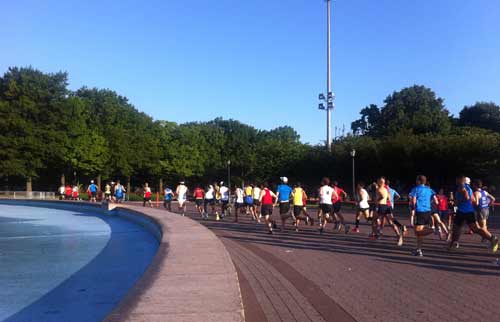 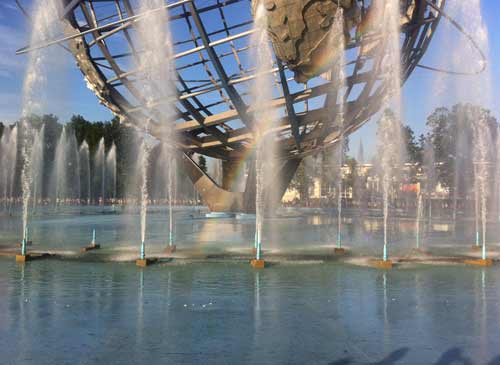 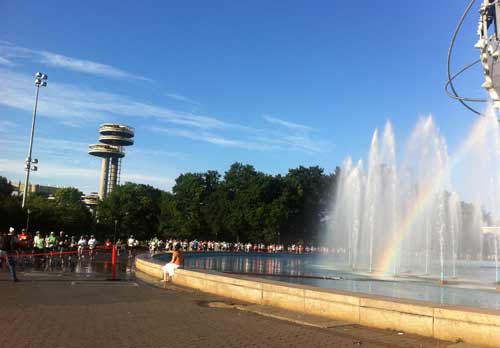 After a slight delay the runners were off! I saw Susan who would go on to have a spectacular race but somehow didn’t see Abbe in the sea of heads.

After all the runners passed it got kinda quiet and weird. I was like ‘Whoa, this is spooky.”

I looked at the map and made my way over to Mile 10 which was like a 15 minute walk. Actually, while I was walking I thought to myself, “You know, if I just ran to Mile 10 it would be so much faster then walking.” But seeing as how it wasn’t a race day I decided to stroll. I also wasn’t expecting Abbe over there until 9AM and it was 7:45.

Out in no man’s land I was like the only human around. I made a call to my Mom and basically enjoyed the quiet morning.

I got very excited when the leaders started coming through! I had no idea what to say though because I know sometimes when I’m on Mile 10 of a Half Mary and people are yelling dumb stuff at me like “Lookin good!” or “Almost there!” I’m like shut up people! I look like crap, am probably sunburned and 3 miles is a long ways to go! Instead, I took pics and tweeted a lot. 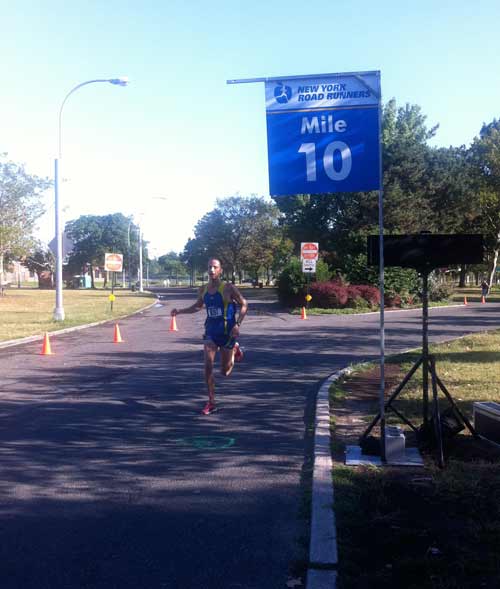 I had no idea there would be so many of my friends running! Lets do a quick cast in order of appearance. Kevin! Lam! Susan! Michael! Dana and Bardy! Dori! and of course Abbe! There may have been more but I took off pacing Abbe. I was pretty excited to get moving but quickly realized that it was very hot out. I missed my cute shady spot at Mile 10. 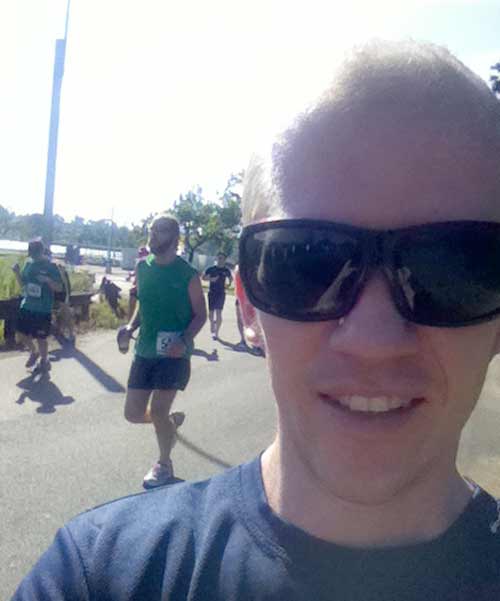 I felt very rebellious running in the race. I didn’t even get any water at the aid stations because I thought someone would go, “Hey man! Where’s your bib! Security!”

After pacing Abbe 2 Miles she told me she had the last Mile on her own so I dipped off to the right. I still kept her in eye shot in case she needed anything.

While waiting for her at the finish I saw this local woman peddling a cart around with some goodies on it. I was hungry. I approached her and was like, “Oh my god is that fresh mango slices!” “Si.” A whole bag of like 12 slices for 2 bucks! I then realized I must turn my attention back to the finish so as to not miss Abbe.

There she was, looking great and finishing with a PR! Congrats Abbe!

I had a real fun time reporting the race and being a spectator but deep down, I wanted to RUN! 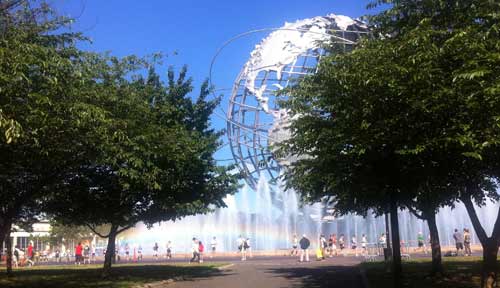