Today, as I was walking up Park Avenue running errands I saw a woman riding her bike with one hand, on the phone and helmet-less. Never mind the fact that she was in a dress, which both irritates me due to safety and makes me stare in wonder at the fabulous fashion statement.

It reminded me of a time in my life that I rode recklessly. There was one day in particular where I should not have lived to see another. I call this day ‘Death Day’ in a sort of humorous way to remember the experience.

I awoke to an incessant ringing at 7 in the morning. It was my cell phone and I was not pleased. I had been out the night before and my head was very foggy. I had not yet started down the path of running or triathlon, my lifestyle was different and this was considered early.

It was a friend who convinced me to go bike riding with him even though I tried to resist. He was going through a rough patch and so I said “What the hell.” I did, after all, love biking.

I jumped into some track pants and a white tank top after slamming a cup of Bustelo. I grabbed Athena, my trusty track bike (the same one I ride today in fact) and blasted out the door. Remember, she has no brakes and due to it being a fixed gear, it cannot coast. It is the oldest and purest form of bike riding.

Crushing it down 9th Avenue while the Drum-n-Bass was blasting in my iPod, I had not a care in the world and my hangover was quickly dissipating.

I banged a left on Houston and was probably riding 25MPH. As I neared the intersection of 1st Avenue and Essex Street a few minutes later a car in the opposite bound lane made a left turn in front of me, cutting me off. This is a common occurrence in NYC and my mind quickly went over the 2 options I had… skid stop or veer behind the car continuing on. I chose the latter.

In a left, then hard right evasive maneuver I swung around the car but to my surprise they were being tailgated by a white Ford Expedition and they intended to make the light as well. I hit the SUV head on, flew onto the windshield and rolled off the back of the car.

When I awoke seconds later everything was quiet. I jumped up and a girl who had come to my aid told me to sit back down. I said, “Where is my iPod and sunglasses?” She returned them to me after collecting them off the ground. The entire flow of traffic was halted East to West and North to South in ‘the Nexus of the Universe.’ The white Suv was stopped and I heard someone get on the phone to call an ambulance. Seconds later I literally heard the siren click on a few blocks away.

Once the ambulance arrived two young, very New York, EMT’s came over. “Hey buddy, how we doing.” “I’m okay.” I replied as I jumped up. “Whoa, whoa, seriously, are you hurt?” I touched my face and head, my ribs, my legs… everything was there. I hadn’t realized the magnitude of the situation. “We want to check you out in the ambulance okay?”

Walking around now, I saw that there were police questioning the driver and maintaining order. As I climbed into the back they were kinda chuckling at me. “Okay, where do you live? What’s your social? How many fingers am I holding up?” were just a few of the Twenty Questions that occurred. I had a question of my own. “Hey, where is my bike!” “Don’t worry, it’s fine, it’s leaning against the ambulance.” Whew!

“You, my friend are quite lucky to be unscathed. What would you like to do?” “Well, I’m a bit shook up, can you guys give me a ride home?” In a roar of laughter they said, “No sorry man, we don’t do drop off service. How about you come to Bellevue Hospital and get checked by a Doctor just to be safe?” I agreed and they pulled my bike into the back. It wasn’t even dented. Tires were fine. Strange indeed.

They were whispering to each other and then turned to me and said, “Come here, before we go we want you to see something.” They walked me out to the front of the white SUV. “Damn!” I gasped. The entire front windshield was collapsed and shattered. There was a baseball sized hole in the passenger side of the windshield. I said, “My handlebars, right!” One of the EMTs touched my right cheekbone and it hurt. “Your face. It was your face that punctured the windshield buddy. Like I said, you’re lucky.”

Back in the ambulance they told me that I had to be strapped down. Whatever. I asked for my cellphone so I could take a picture. They got a kick out of this as well. 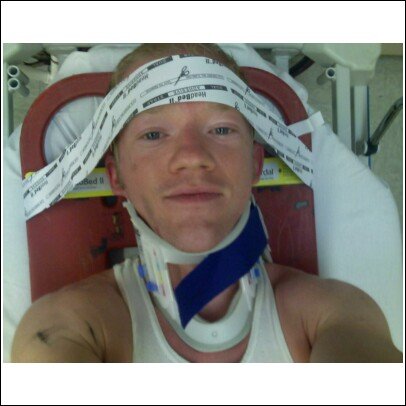 One drawback was that technically, since I was okay and it wasn’t an emergency they wouldn’t put the sirens on for me. Lame.

As I was wheeled into Bellevue on the gurney, my bike was being wheeled in as well. We stopped at one point and I could hear the nearby Doctors talking about my bike and how gorgeous the frame was. Damn straight, it’s vintage!

They put me in a giant square room with many other patients waiting on beds, each of us in our own nook facing each other. Soon, a Doctor came over and gave me the riot act about not wearing a helmet. Then, he poked and prodded all over. He pushed his hands into my lung cavities and pushed my head this way and that, you know, Doctor stuff. He shuffled off.

Soon after, he returned with another Doctor. He explained to the other Doctor that he could find nothing wrong with me and wanted a second opinion. This new chap did a lot of what the other did and also had a few new tricks up his sleeve. As long as there weren’t needles involved I was game.

Finally, they told me I was free to go. “Do you want anything for the subtle pain you might have where your cheek hit the window?” “Certainly!” He then wrote me a prescription for extra strength Aleve and walked away. I felt lame because I had just been prescribed high powered aspirin.

I grabbed Athena and walked out of Bellevue. In doing so numerous police yelled at me and each time I had to explain that I was hit by a car.

Out on the streets again, I looked up 1st Avenue, jumped on my bike and rode home. I celebrated my survival with a few beers on my roof that afternoon.

I now wear a helmet every time I bike, even though only my cheek bone was bruised.

I also never take life for granted. Go out and live.