What’s so cool about being a part of the New York Rogue Runners? You get to design races!

The Cardiac Crusher Brewery 4 Mile Prediction Race (conceptualized by Joe) is a race in which you guess when you will finish. Runners cannot have any timing devices on them and the winner is whom ever comes in closest to their predicted time. It’s brilliant in design because it really doesn’t matter if you are a fast runner, what matters is understanding and listening to your own body. 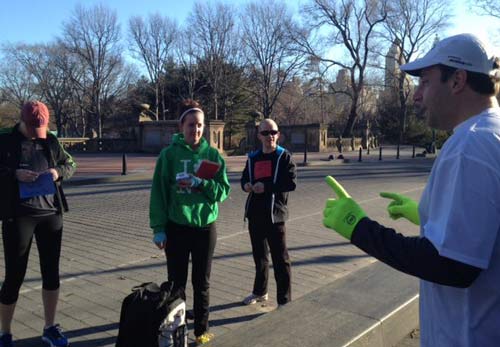 We all arrived at the 72nd Street Transverse and put on our bibs. There were 6 racers (New York Rogue Runners is a relatively new group so I expect it to pick up as the season progresses.) Joe showed us the prize of Cardiac Crusher Brewery Citron Hefeweizen and then did his best Peter Chacha (CHA CHA!) impression, going over the course. Then, each of us gave our predicted times, mine being 24:30 which meant I was really going to set it off if I wanted to win. Since Sonja rarely lets me train anaerobically, I was looking forward to letting loose.

Joe set us off and I immediately just started running at I guess what I would call my 5K pace. Not having any timing device is strange and yest at the same time, very freeing.

I took it easy going up Cat Hill and then opened up a bit, feeling a little heavy. Perhaps it was the 20 degree weather holding me back?! I hate running in the cold. The 102 Transverse was a blessing. In my head I knew I was at the halfway point.

The ‘West Side Rollers’ proved a bit difficult because that’s when the wind picked up. I did, however start to feel really good at this point. What’s funny about these Rogue Races is that the other 90% of the runners out there have no idea there is a ‘race in progress.’ You get very puzzling looks from people when they see the homemade bibs. I also find it slightly upsetting as I am passing other runners and then realize, “Oh wait, these folks are just out for their run, they aren’t racing you dummy.”

Cruising up to the Finish, they called my time out at 25:14, 44 seconds off my prediction! Not terrible I suppose.

Shortly after the rest of the gang came through… Claire, Robin, Elyssa, Amy and Maura. The big winner was Robin, who was only 13 seconds off her predicted time! I came in 2nd Place (Amy in 3rd), earning me 2 of Joe’s coveted Citron Hefeweizen! Sweet, a Beer prize! (review of his brew to come later) 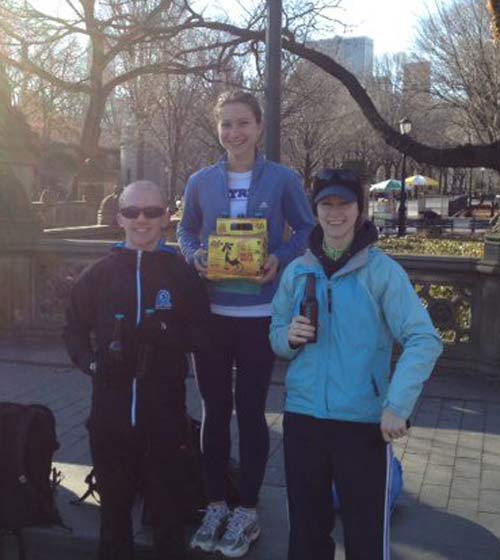 Thanks to Joe for his excellent design of the Prediction Race!

« Swim Karma
From Beer to City Bakery to Breakage »