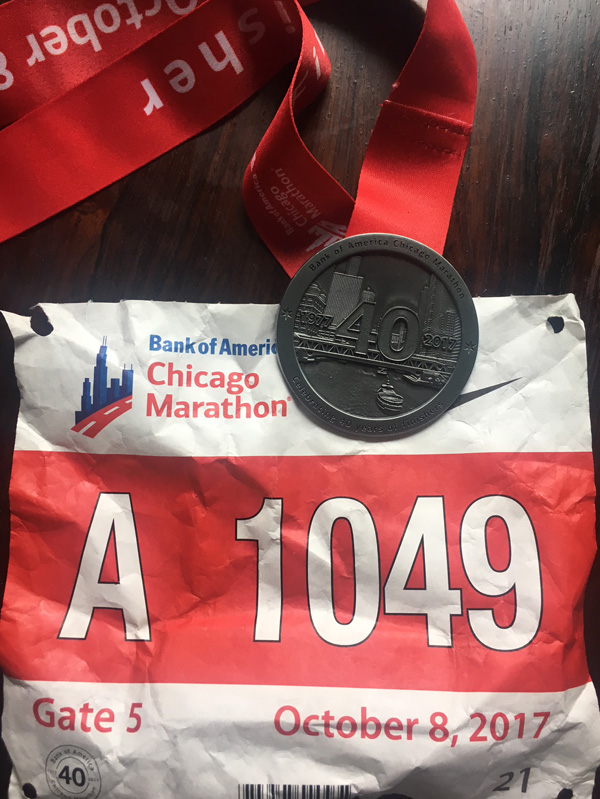 Abbe has always wanted me to run the Chicago Marathon. She ran it the first year we dated, on her birthday, and she loved the course. One morning as we were looking at the race site we noticed that we had made the qualifying time to enter and avoid the lottery! We made a quick decision and registered. Game on.

We left so very early the Friday before the race. We caught a cab at 4:45AM and were at the gate in Laguardia by 5:15 for a 6:00 flight. The good news is that we were in Terminal A, or ‘Marine Terminal’, and I had never been to that one! It was a terminal used for people who commuted via airplane. Abbe and I played a fun game called spot the runners.

We arrived at our hotel in Chicago at 9:15AM and I needed coffee stat!

Next, we took Chicago’s ‘L’ to the expo. I would come to love the L as it was so efficient and reliable, unlike the state of our NYC Subway system these days.

The expo was Bonkertown and not my favorite place. The lines for bib pick up were a bit insane as they forgot to tell runners to check in at the kiosks before the secondary lines. I thought it would get better once I had my bib, I was wrong. As we made our way into the main part of the expo we had to go to the back to get our shirts, of course. Walk through all the race goodies so you might buy something, then you can leave. Abbe and I did look at possibly getting a Chicago tee shirt or hoodie, but the lines stretched out of the roped in areas our around the expo pathways. I had never seen anything like it, hundreds of people just waiting to buy stuff. I also wondered how these people had the patience for these shenanigans. My head was wrapped around how we were going to get lunch before I passed out.

Speaking of lunch, it was awesome! We went to Abbe’s favorite sandwich shop called Xoco (Choco). It’s one of chef Rick Bayless’s spots. I had this awesome pork sandwich that was served faced down in a spicy tomato broth. 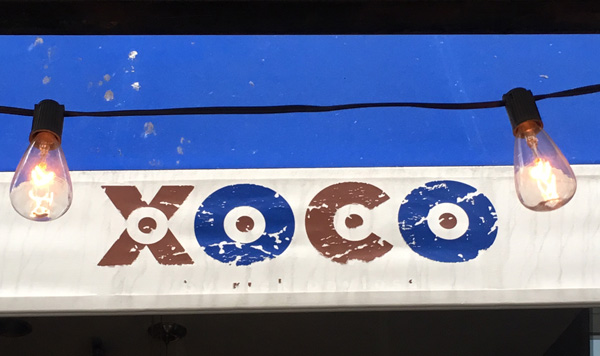 Next up… we met one of Abbe’s coworkers Julian and his wife Denise at a new restaurant called Proxi in the West Loop. Look at me all ‘I know the names of the cool neighborhoods after just a few hours in town.’ The food was spectacular. We had tried some of everything being a bit indulgent as we still had one more night before the race.

On Saturday I went out for a solo shake out run. It was a 3 mile out and back to Navy Pier. It was a gorgeous morning, but getting hot quick. 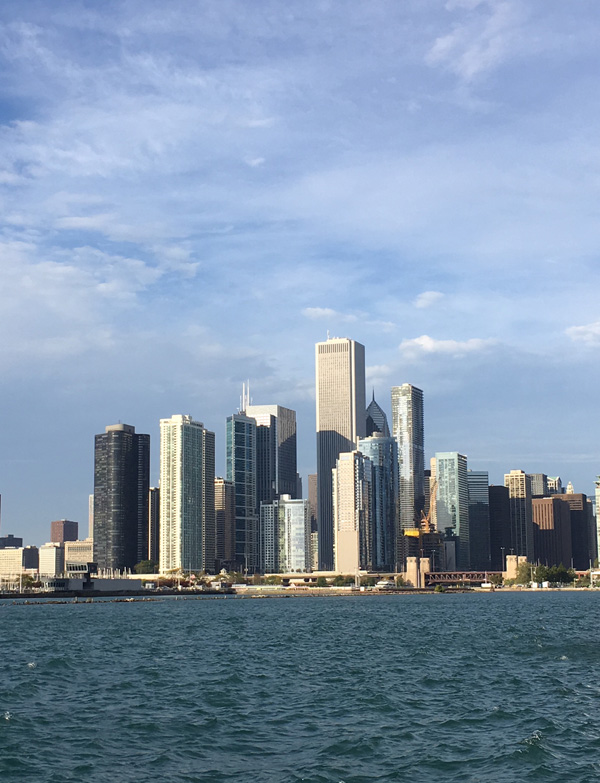 Abbe had a work meeting with chef Noah Sandoval at his restaurant, Oriole. After that Bojana, Brian and Amanda picked us up. We were headed to Lincoln Park to a pizza spot Bojana knew (she grew up in Chicago). Abbe and I had thin crust while the rest of the group had deep dish.

The rest of the day was spent on a boat doing an architectural tour of the city along the rivers. It was quite fun and made a lot of sense as we were off our feet. 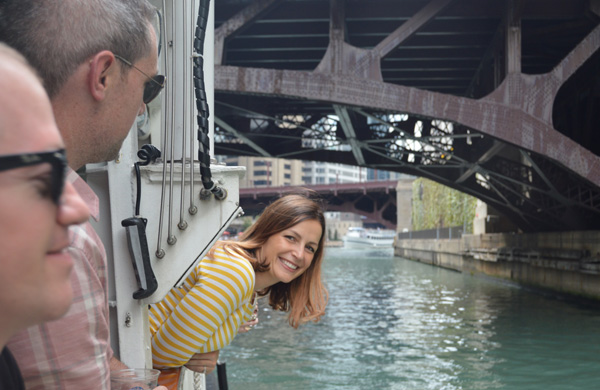 We all met Jason and Amber for dinner at Ostoria Langhe in Logan Square. The pasta was delicious and was definitely a good choice. Running fuel was consumed… and we were in bed by 9:30.

We were up at 6 prepping and I was very excited to run this puppy. Weather looked pretty bad (hot and humid) but didn’t care. I was at the end of taper madness and was going to be set free into the streets of Chicago.

We left the hotel and walked the one mile to the start. It was actually kind of brisk and cool out… for now.

I kissed Abbe goodbye at Gate 2 as I had to go to Gate 5, which made no sense. I spent the next 15 minutes winding around navigating to the A Corral which was slightly nerve wrecking. I felt like a mouse in a maze, with no cheese reward.

In A Corral with 10 to spare I started looking for all my friends. I couldn’t find David, but I did find Rowland and Delgado, or ‘D’ as we call him. We chatted about pace strategy, all of us looking to be right in the 3 hour mark. If conditions were favorable, then we push to sub3. We fist bumped and D said “Stick together guys!”

The gun went off and were took off at an even 7 minute pace, settling in. It was a beautiful morning, 65 degrees with a cool breeze, for now. 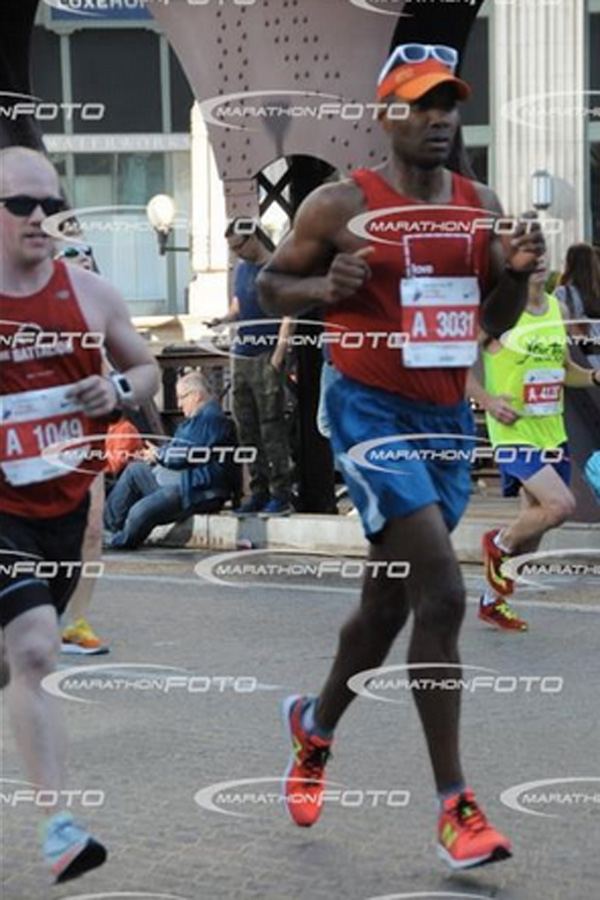 We were running in the dark canyons of center city and it was way cool. The crowds were similar to the NYC Marathon, very loud and three deep along the course. Around Mile 3 we lost Rowland in the crowds after a bridge unfortunately. D and I had a quick chat that we should aim to hit 6:30s for the first half, knowing that the second would be bad and we would lose time. I was down. 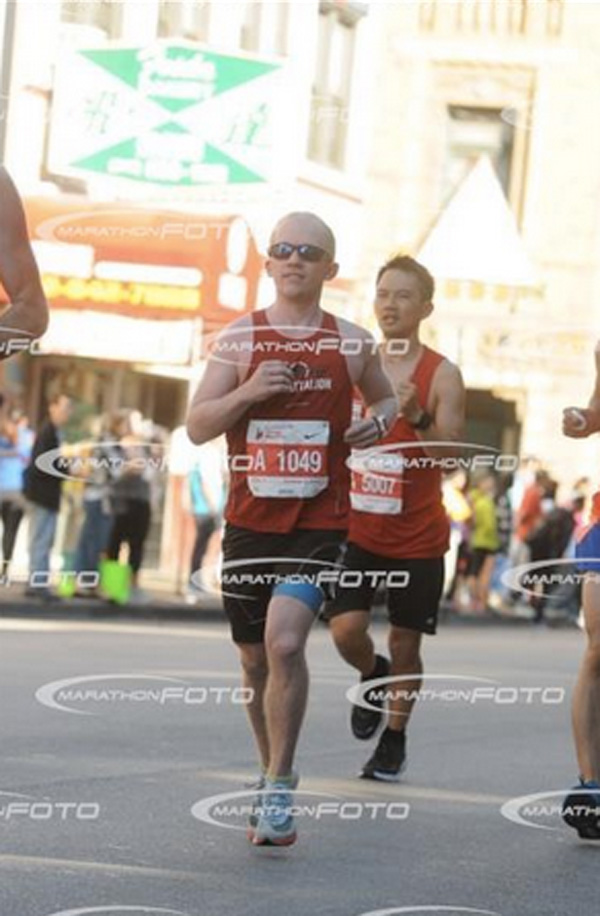 The route up into Lincoln Park is great. It’s a really wide road with tons of crowd support. Slowly we ran up against the back of the 3:00 pace group and I thought to myself ‘What should we do?’ As if on queue D says “Baker what should we do, should we go?” I laughed and said “I was going to ask you the same thing!” “Then we go!” Yells D and we slowly pushed past them.

At mile 5 we hit our first ‘6:30’ spot on. I was psyched. D also taught me a new way of getting fluids while running with a group, the person closest to the aid station simply passes water to the guy on the outside, brilliant!

We were also running on the left in the shade which helped out a lot.

I felt great and so did D. We had quite a system we were rocking and we were overtaking lots of people. We saw Amber, Jason and Eric cheering right around Mile 12!

On everyone’s splits mile 14/15 is where things got strange. It says we were running a 5:38 pace, but we certainly were not.

Miles 15-17 were in the 6:40 range because I was struggling and told D I needed to ease up a bit. He was cool with this and let me control our timing. My stomach was a bit screwy as I had a super concentrated Gatorade around mile 14 that didn’t sit well. It was also heating up and things were getting tougher. 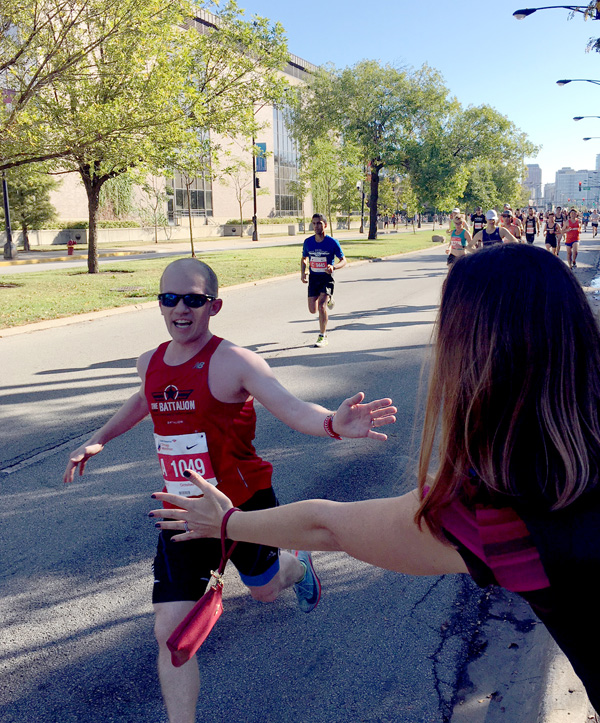 I think it was right before Mile 17 that I told D to go ahead as I was going to slow him down. I could feel myself faltering in pace and energy and knew I couldn’t keep up the 6:40’s anymore. “Okay Baker, see you at the finish!”

Miles 18-22 I slowed down by 10 seconds per mile roughly. At Mile 22 I was running a 7:17 pace and my legs were on fire. This is pretty normal (beat up legs) for a marathon, I think we all just forget it’s going to happen until it happens.

I was just hanging on in the blistering sun and trying to get to the end. Since Mile 16 we had been in unobstructed sun and heat (75 degrees maybe?) and it was taking it’s toll.

Miles 23-26 were in the 8:00 minute range and I was struggling. I just kept plodding along mile to mile, aid station to aid station. I felt like I was in slow motion and that with every step my quads might explode, blood and muscle tissue splaying my friendly spectators. Gross, sorry.

I finally made it to the Mt. Everest of a highway overpass to make it to the final 200 meters. As I came across the finish D was waiting there with a high five. I finished in 3:02:36, which I will take any day.

We tried waiting for Rowland for awhile but a security guard made me walk to the end which sucked, but I get it. 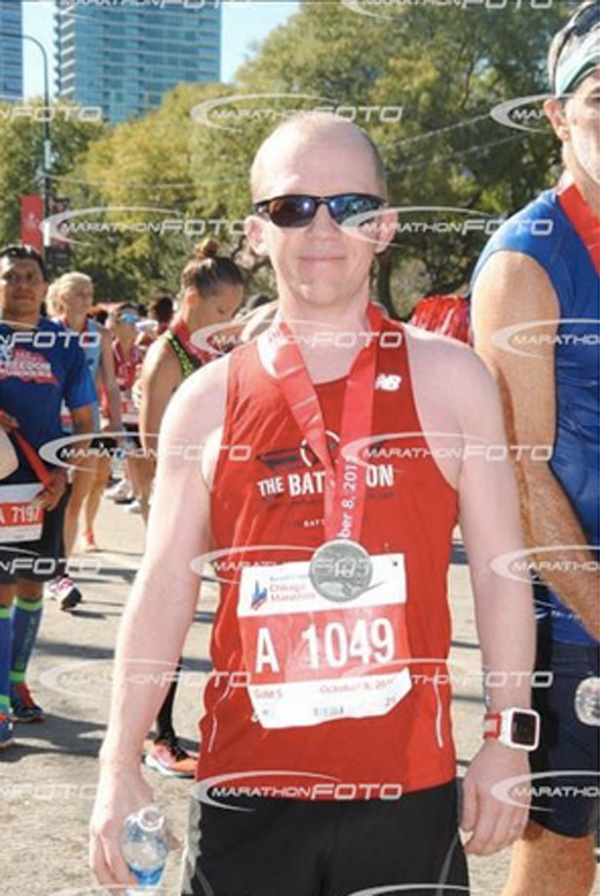 I saw a couple friends finishing, including Grace. I tried to find D and Rowland and as time ran out I knew I had to make it to the Palmer Hotel where my friends (and wife) would find me. I wasn’t running with a phone so it was crucial I made it to the rendezvous point… or be lost forever.

I planted myself in the hotel lobby bar and proceeded to order the best chicken noodle soup i have ever had… with a beer of course! I also made friends with a lot of the folks at the bar. Once Abbe, Bojana and Amanda found me we headed out to get ready for the pig roast celebration that Nina and Momo (Bojo’s parents) were putting on for us. It was an absolute blast and I have never been more stuffed after a race. 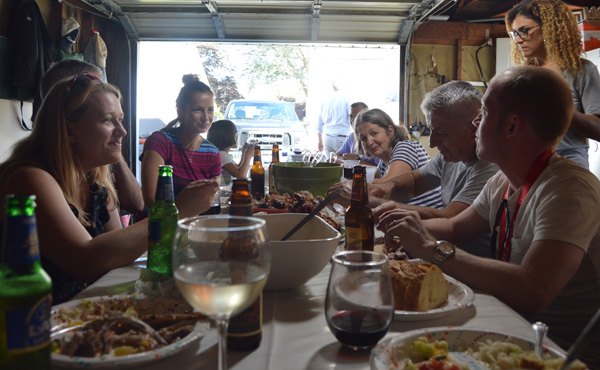 This race was a blast, thanks Chicago. It was far from easy for sure, but the course and the crowd support and the amazing volunteers made it a fantastic experience. I achieved my goal of coming in right around the 3 hour mark and had fun doing so.

Thanks to Nina and Momo for the awesome after party!

Big ups to Rowland and D for the fantastic pacing. We were on fire for that first half kicking out solid 6:30s! Days like this really make me appreciate the running community.