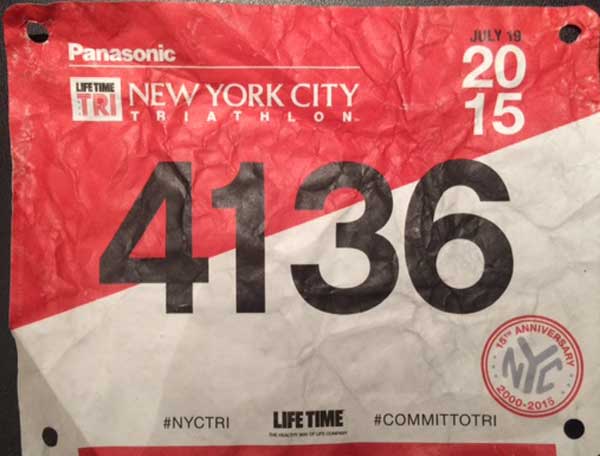 My favorite triathlon happens to be the NYC Triathlon. It is a hometown race, it is a short distance and the course is fast (and can be furious). 2015 marks my fourth year attending and I feel like I know the ins-and-outs of the race like the back of my hand.

I am currently training for a Full Distance (Ironman) race and so my training has been focused in that direction. I had no goals for this race except to have fun and give it my all.

I went to the Expo to check in on Friday during work. There, I met up with Amy and Joe, two athletes I coach who are some serious competition. We had a few chuckles during the race briefing as the Fox 5 News gals gave us race tips.

We ran into Juan and Elizabeth in the expo as well. Such a love fest these triathlons are!

The next day I went to rack my bike in transition and noticed how incredibly hot it was. I think it is always hellish during this race. Thank god it is only an Olympic distance. This year, just like the last 2, I decided to leave all my crap in Transition on Saturday rather than wake up at 4AM. Like I said, knowing the race means I get that extra few hours to chill and drink coffee, watch the news and play with my adorable dog-like cat George. (instagram.com/toosexyformyfur) Follow him, I dare you.

Dougie’s son Doug (16) was having his birthday party at Carmines that night. He invited a select few to the event. In attendance was Dougie, Danika, Doug, Hailey, Madison, Susan, Eric, Joe and his son, Abbe and myself. I had dared Doug Jr. that he couldn’t eat a whole serving of Carmine’s family style bolognase, a daunting task. There was cash on the line, so Doug Jr. had his game face on. We started immediately, confusing the waiter when he asked what kind of water we wanted and we instead ordered one family order of bolognase.

I would like to tell you that Doug Jr. fought the good fight and came out victorious, but in the end the pasta got the better of him. Seeing as how he ate 90% of the meal I awarded him half of his total prize money. Nice job Doug on a well fought fight!

The rest of us racing the next day (Dougie, Susan and myself) were well fueled on pasta and ready to rock the next day.

I awoke feeling fresh and spry at 5:45AM on race day. I made myself some coffee and relaxed for a bit, watch online as the professionals took off. I left the apartment to catch a quick cab west at 6:15 and by 6:30 I had linked up with Dougie at our meeting point. It was all very military and all very carefree simultaneously. One of my giant water bottles was filled with Cafe Bustelo.

We wandered along the North River and it’s lines of excited triathletes. I ran into my friend Ben there and passed another pal Elik before we found Joe and Colman on a bench. We four pondered the race and the impending hot weather that was to strike us down on the run. It looked to be bad.

As time started to catch up with us we all parted ways. “See you boys on the other side.”

In my corral I noticed the usual bits of horrifying debris in the water floating around. The current was on it’s way to becoming a slack tide at this point as the race was delayed. The thought of jumping into the Hudson no longer scares me, in fact it thrills me as if I were jumping into the community pool on a hot summer day. The march of the penguins had begun as we made our way to the start platform. I tried to put a few guys at ease that were around me asking questions. I would like to think I helped them.

As I entered the soup I simply dug in and started swimming. It was a beautiful sunny day and I was happy to be alive, splashing around and enjoying the mayhem.

The river was choppy, it was murky and I tried to not drink it. My form was good and I did not stop at all… just a simple morning dip in the mighty North River. I emerged 24 minutes later (my slowest time to date by 6 minutes) and ran off towards T1.

Running along the river towards my bike (which I had not seen since the day before) I wondered what state it would be in. Flat tires, missing and not there at all, maybe a new paint job? She was there ready to rock without any issues. I geared up and we took off. I saw Dougie exiting the swim maybe 5 minutes behind me as I blasted up the ‘steep hill’ onto the Henry Hudson Parkway.

I had decided to do the race naked (without a Garmin) and so once on the open road I just dropped the hammer. I felt great, the sun was shining and I was in a groove, flowing north.

It took three miles before the burning in my quads subsided and I could actively pursue and pass people. With no fear holding me back and nothing to lose I just barreled forward, trying to push my own boundaries. The course is comprised of rolling hills, some rather large where speeds can top out. I just did what I do best, rocket downhill and meticulously move uphill focused on easy cadence and relaxed breathing. It was truly a blast.

It is a very congested course and I was excited to hit the turnaround point without injury or error.

On the return I really let it rip, not caring if I had enough in me for the run, but somehow knowing I would get the run done no matter what. This is when using ‘heart’ over Garmin data really makes a difference. Data tells you that you can’t, your heart tells you otherwise.

With 8 miles to go someone was alongside of me that I recognized! It was Dave from Episode 035 and 109, he knew me from Burrito Races and he helped me fix a flat in Princeton. We chatted for a bit, he let me know that the guy up ahead of us was a jerk, drafting him illegally.

With 2-3 miles to go and not many people on the road heading out on the bike Dougie passed me and yelled hello. Strange indeed. I quickly deducted one of two things… mechanical issues with the bike or he drank too much of the Hudson and had a quick stomach pump. Either way, he had lost an hour and yet, he seemed in good spirits.

I ripped into T2 and flipped on my sneaks. The first half a mile or so is a narrow path that ends in a quick switchback. After we were through there the all familiar 72nd Street presented itself. I heard my name almost immediately and saw Abbe, Danika, Hailey, Madison and Eric cheering me. Hailey and Madison had made me a very cool sign. 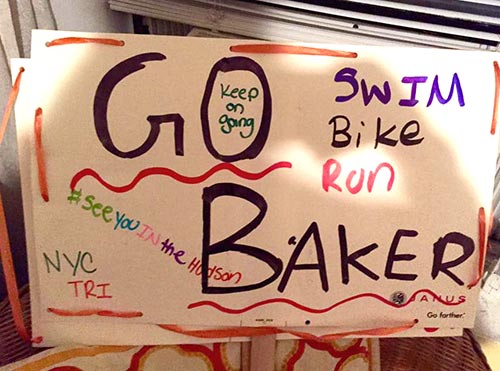 As I waved to them I passed a guy who yelled “Hey Baker, you’re killing it!” It was my old friend Jim from Ironman NYC! I wished him well and proceeded.

Shortly after I saw the Gotham City Runners banner and the crew cheering me on!

Entering the Park I could feel my pace quickening, this was good. (Remember, I don’t have a Garmin on.) I was very disappointed to not see Matt6 at the first aid station passing out Gu as he has been in the 3 years past. Matt, hello? Where were you? I didn’t even take a Gu.

I plodded along and saw Joe. He and I both agreed it was a brutally hot day and it was killin our speed and morale.

A little while later I passed Colman on Harlem Hill. “Beers at Amsterdam Ale House!” I yelled.

On the final 2-3 miles down the East Side I felt great and held it together. Nothing to report other than I ran through a bunch of course sprinklers and loved every moment.

On the final approach I saw Abbe yelling at me and taking pictures. I gunned it.

This was not my best NYC TRI time by far. I think we lost the current with the delayed start. I am happy about the race though. Getting to see friends and athlete’s that I coach out there makes this such a great sport to be a part of. 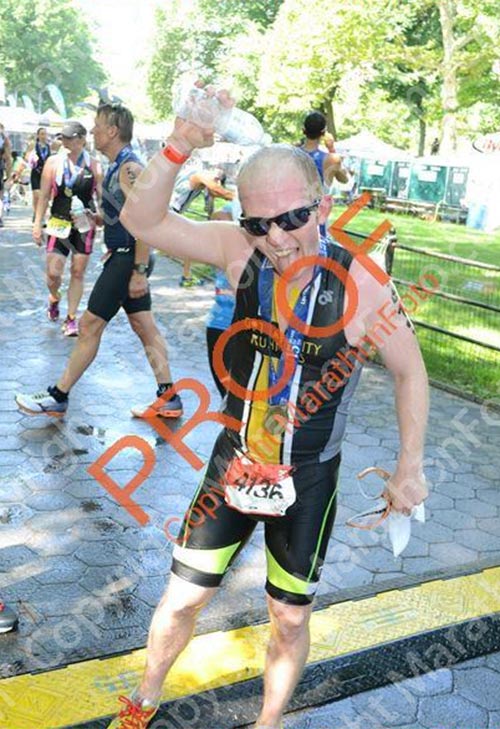 Doug eventually finished with a smile. He had a double flat right out of the gate and only one tube.

Congrats to everyone who finished, especially my group…Dougie, Joe, Amy, Colman and Rachel!