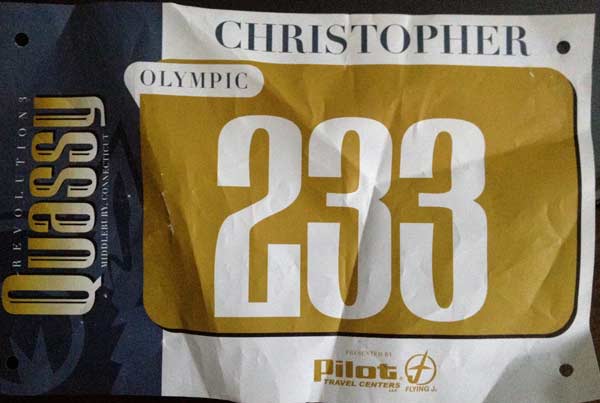 Somehow, I was talked into doing 2 triathlons in one weekend.

On Friday I left work early to meet Jim for our drive up to Quassy, Connecticut. Yes, we hit loads of stupid Friday rush hour traffic. How people do that everyday I do not know. What I do know is that if I participated I would be the most stressed out crazy person on the road and possibly wanted by the police for roadside murder.

The first thing Jim said to me as we began our trip was, “Did you bring your rain gear? I did.” No, I didn’t pack rain gear, nor did I pack anything warmer than a tee shirt. My race outfits were 2 tank tops. I was worried.

We arrived in Quassy at 7PM with 1 hour to spare before transition closed. We checked in, then listened to the race director discuss tomorrows plan as we were in for a bit of a storm. In fact, it was already pretty gloom out and I was cold. While there we bumped into Gallagher, one of our friends who we thought was racing the Half on the following day. It was great seeing him and we made plans to meet up the following day.

I had us booked at the Waterbury Marriott a few towns over so we headed there to check in before dinner. Entering our room, we were overwhelmed by it’s grandness, then I remembered I had booked the business suite! Ed was supposed to be doing this with us but had to bail, so Jim and I both had separate rooms with a kitchen, dishwasher, 2 bathrooms, the works.

After check-in we went in search of carbs! Driving towards an Italian spot I had looked up we hit a red light. Jim and I were looking at this really cool restaurant to our right before we both said, “That place looks cool!” 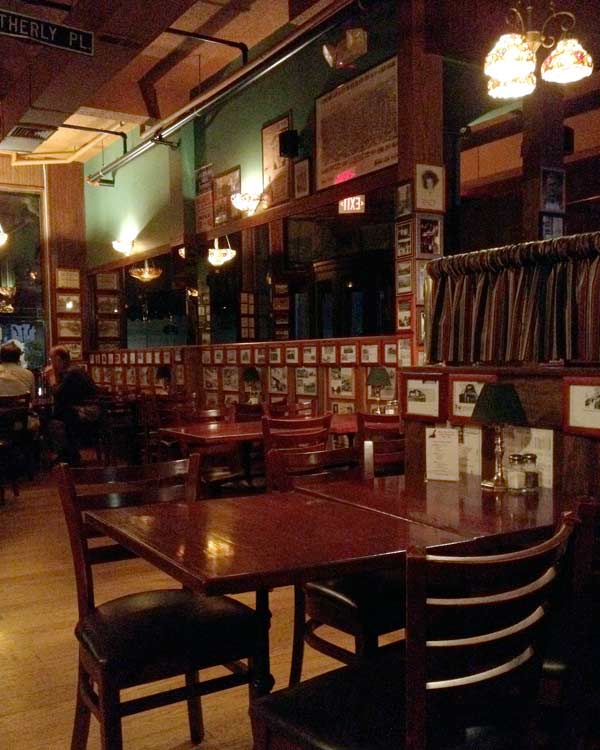 It was. The place was called City Hall Cafe and had a really old classic vibe going on.There was even a live band doing Neil Diamond covers! So cool.

I had lamb chops (I’m a sucker for lamb) and Jim had pork chops. It was enough food for 4 people. To get our carbs in we had a few beers.

Back at the hotel we noticed the Celtics game on in the lobby bar. I agreed we could have one more beer as long as we were in bed by 11:30AM since we had to get up at 4:45AM. Not to justify staying up because of crappy weather racing, but I was NOT looking forward to the next day’s rain. 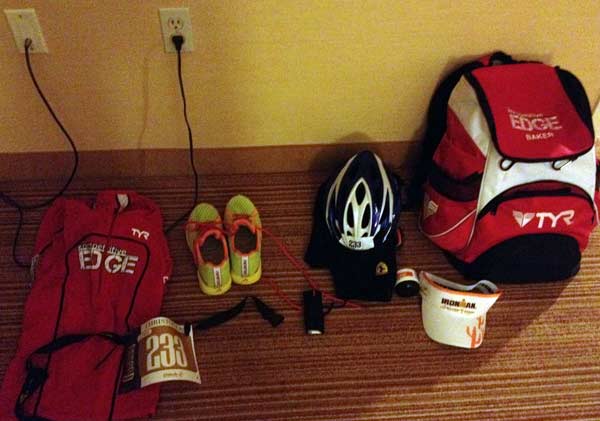 I am addicted to the Doppler Radar. I love it so much! I spent the morning analyzing the rain patterns trying to predict when the rain would pass. It was drizzling now and looked (generally speaking) pretty crappy outside. Like, if you didn’t have to race, you would sleep in and drink coffee in your PJs until you absolutely needed to leave your apartment. We, on the other hand, were going swimming.

I ate a banana and threw on my Kompetitive Edge race kit. I was really excited because even though I had worn the red and grey KE tops in marathons this April, I hadn’t worn the full kit including the tri shorts.

In transition everyone was pretty chipper as the scene in any Rev3 race, but the rain was coming down and I was cold. As soon as I could I put on my wetsuit, a general faux pas in any normal circumstance because you get hot. Even with the wetsuit on I was cold.

Gallagher, Jim and I headed down to the beach to get some swimming in before gun time. Amazingly, the water was warmer than the air and it felt so good to get in! I felt like those arctic monkeys you see on the animal station in the hot springs with only their ice covered heads poking out! Monkeys don’t wear goggles.

We had to wait awhile back on the beach to start because one of the course buoys had blown off. We were once again freezing.

As my wave lined up at the waters edge (Wave 2) some of the guys were praying for more rain insisting that we should get it over while swimming. I hate all of these people. They prayed way too much. Stay tuned.

The gun went off and we bolted into the soup. I was hard right, second back, and pretty unfazed at the prospect of a bunch of people swimming over me. I guess Ironman mass starts with over 2500 people will numb you to a wave start. 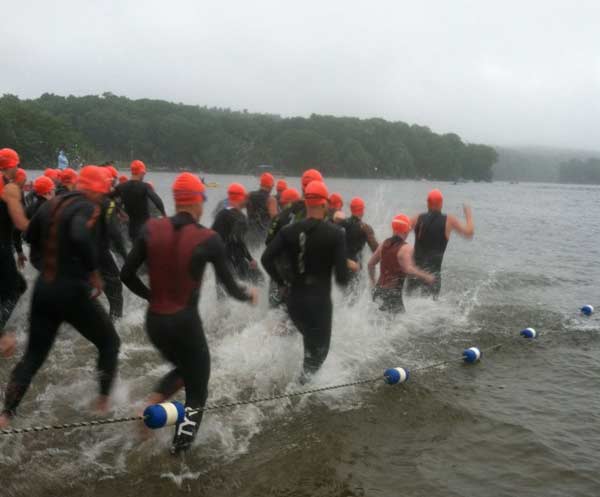 That’s me second from the front.

This was my first open water swim of the season and I freaked a little. Not like I stopped swimming, I just got all up in my head. Was my breathing off? Where was I going? Like, really stupid things to think about. The col thing, was that this same thing happened last year during my first swim and I knew it was just a matter of time.

Indeed it was. After I passed the first red buoy, marking the 1/3 mark, everything was fine and I was swimming hard. It was lightly raining and visibility was sub par but I did pretty good on my sighting. Now, all I thought about was how to make the swim longer because the bike was going to suck. It was so lovely in that lake water. Warm, no wind, I had eye protection and if I needed nutrition there were fish. 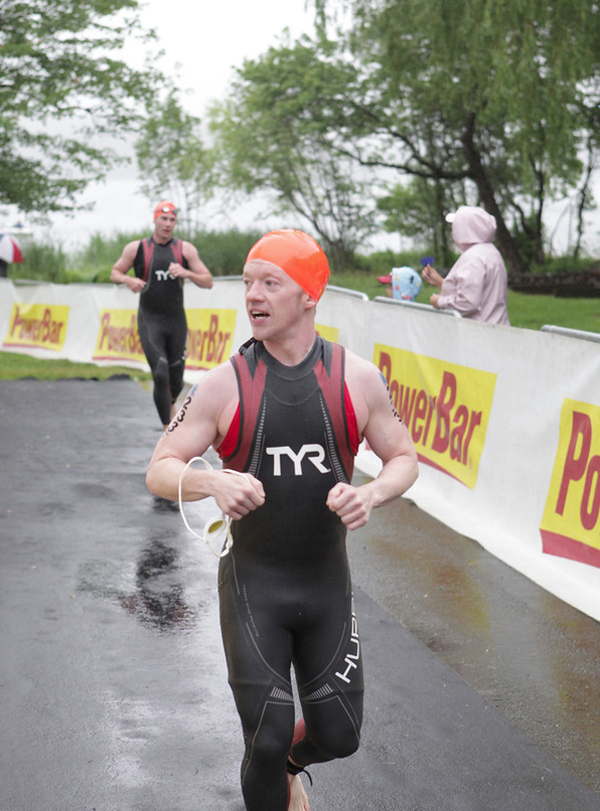 Exiting the swim I kept my wetsuit on as long as I could. I didn’t even unzip it and in fact I ran hard to get my temperature up. I threw on the arm warmers I bought the night before. They were like the last pair and if I hadn’t had them I don’t know if I would have finished the race without a med tent stop.

I started the bike portion, semi-excited because I was racing my new Illicto aka ‘The Morrighan’, and sad as it was raining and cold.

I saw Jen right off the bat which cheered me up.

The Rev3 Quassy course is no joke. There are no straight aways, only uphills and downhills. Imagine this if you will… as you rode up the hills it was quiet and calm with the rain slightly annoying. Once you began the downhills and started hitting 20+ MPH the rain stung and made visibility null and void. Thanks god I had switched out my Oakley Fast Jacket’s dark lens with the red ones. This helped immensely.

The first 10 miles were brutal and I was getting passed a lot. This pissed me off because I am normally the one doing the passing on the bike (since I get passed by so many people on the swim). My bike was making a funny sound, like a hissing sound, but since it was raining I couldn’t pinpoint it and just kept riding. (Travel into the future with me. As we were getting ready for the next day’s triathlon Jim and I discovered that my back wheel was rubbing against the frame and brakes! After making the adjustment the ‘hissing’ sound stopped and the wheel zipped around. Live and learn right?)

I’m not sure what exactly happened at mile 12 or so but I got this fire inside me and everything stopped hurting. I blasted into the high gears and started passing people on the downhills and laughing out loud at the crazy rain. I was back. 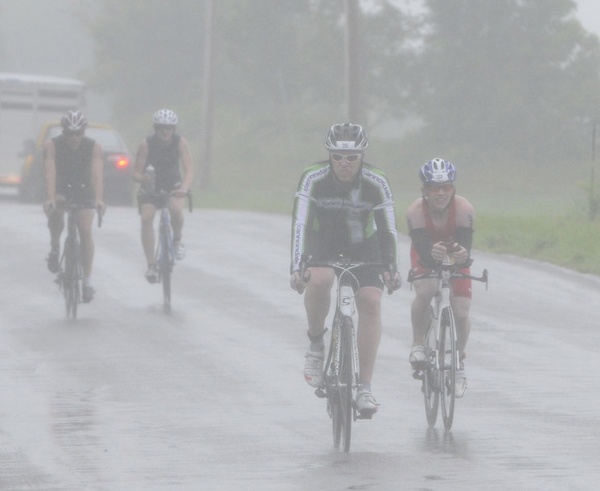 My joke of the day was, as I rode next to someone going the same pace I would say, “I heard we’re in for some rain.” I had a few guys laughing pretty hard which was my goal. I mean come on, riding in a 50 degree downpour? No one is having a great race so we may as well make the best of the situation.

Even though I was on my second wind or warmed up or whatever, at Mile 20 I was ready to be done. My hands were numb and it got really hard to shift gears. Then I started thinking about how hard it would be if I needed my brakes.

Once again, I saw Jen! She held her hand up as to high-five me and I thought, “No way I can do this Jen, my hands are numb and I will crash.” But then she just said something like, “Virtual high Baker, looking good!” Phew!

Leaving T2 I grabbed a Gu since I hadn’t eaten anything but my banana earlier. My feet were numb so it kind of hurt to run on them. More worrisome, was the fact that if I was actually running to hard and maiming my feet I would have no idea.

The run rocked! I was really feeling it and got my legs in check real quick, like by mile 1.

I passed a lot of runners and used that as my motivation to keep going. I thought of ‘Reach the Beach’ and our Kill Sheet and how many kills I was making. 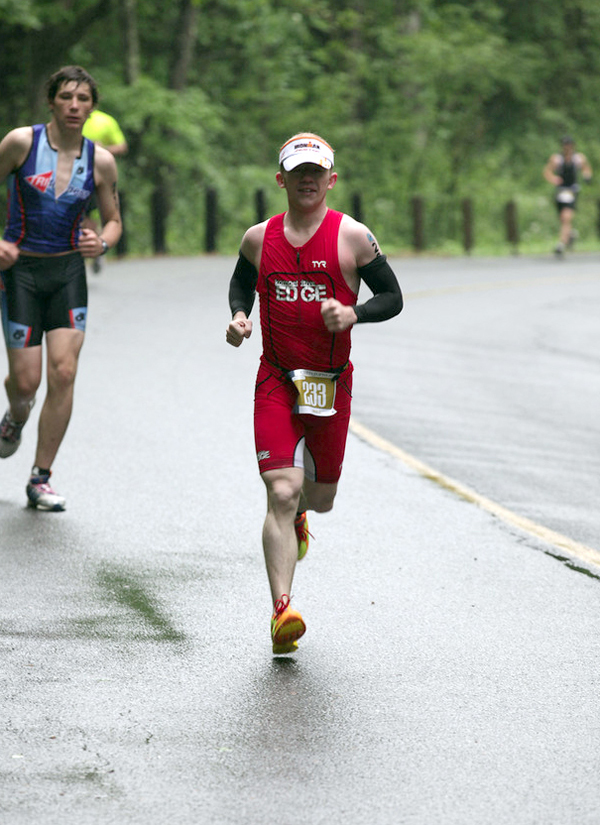 Mile 4 came up really fast. I didn’t even see Mile 3 for some reason so Mile 4 was like, “Surprise!”

One interesting thing that happened was that as I was passing a guy in my Age Group he said, “Ah, damn it!” I wanted to be like, “Hey man, we are nowhere near getting any kind of awards today. It’s gonna be okay.”

Rev3 is mostly chill people but you occasionally get a hot head.

The last mile is all uphill, not cool. As I made my way to the finish I was surprised to see my friend Amanda cheering me on and then doubly surprised to see a field of mud separating me from the Finish! 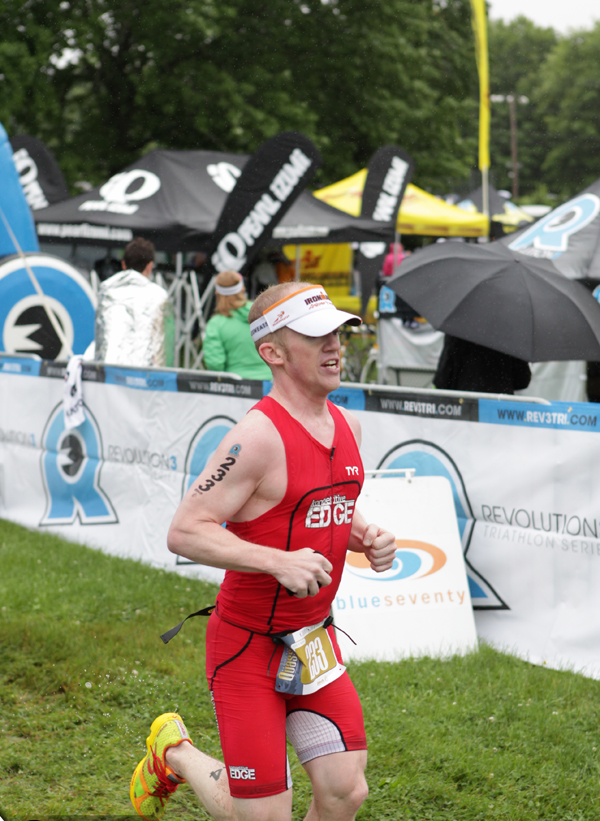 My time was 2:59:37 which was the least of my concern. I just wanted to get it over with. I have heard a lot from people like, “Dude, rain and cold ain’t nothing. You should have killed it.” Sorry, but not in my world. Case in point… I ran a 3:23 Marathon in 90 degree (shit show) heat and then a 2:54 two weeks later in perfect conditions.

Anyway, it was still an awesome Rev3 as always and I was so happy to have finished!

I chatted with a bunch of strangers afterward and then went to the Finish to cheer. Once Jim came in we made the decision to bolt. Why? We had 1 hour left on our hotel check out which meant we could take a hot shower.

After the most amazing shower and coffee Jim and I continued our journey. We were headed to Long Island to meet up with Ed for our Sunday triathlon…

Big thanks to sponsor Kompetitve Edge for hooking me up in some sick gear!