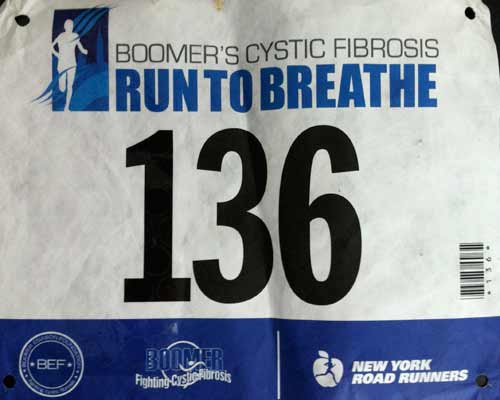 The week back from a long vacation is never fun, but I was very excited to have a race at the end of it. The Boomer’s Cystic Fibrosis Run to Breathe 10K was a new race put on by the football legend himself.

The Friday before the race I did some easy spinning to loosen my legs, then went to Abbe’s for dinner. Amanda and Stefan came over and Abbe made us some amazing pasta dish to carb-o-load on!

Up at 5:30AM! What? Yea that’s early but stupid Irish steel cut oats take forever to make and I am beyond Quaker Oats. Sorry Wilford.

Abbe and I did a warm up run up to Central Park arriving to our respective corrals right on time. I get really stressed (quiet, pensive) before a race until I am in my corral ready to be let loose. Surprisingly there were not that many runners up in Blue. I had front row seats to watch Boomer give his lil speech! I was highly disappointed that Peter Chacha was not there to give race instructions as it’s always a good time (I learned this from Matt6) to yell “ChaCha!” as he takes the mic.

The gun sounded and we were off. First up was the notorious Cat Hill. I ascended it easily and kept my heart rate low, trying to build a nice pace. What I realized as I hit Mile 1 in 6:15 was that I was running to conservatively. My PR in a 10K ha me running 5:58s all day, I would need to make up some time in order to PR, but could I? 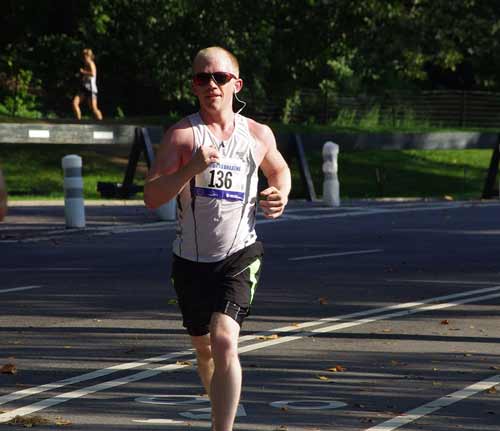 I was running steady with a group of runners that I decided were holding me back. Increasing the pain threshold I moved past them and started picking off people.

Harlem Hill arrived like a heart attack. It burned pretty bad and this time I didn’t pace myself, blasting up it. As far as strategy goes, I think I’m a fairly decent hill runner so I try and put some distance on people on the uphills.

One thing I took note of on this race, is that due to the fact that all my systems were in check and working great (legs, arms, food, heart, mind) that I was having a blast! I try to tell myself on occasion when racing “This is what you love doing, do not be so concerned with time, enjoy yourself.” I didn’t even wear my Garmin so I had no idea what pace I was hitting and you guys know me and my math skills, those Mile clocks are baffling!

At Mile 5 I saw my time and to PR I would need to run the last mile in 5 minutes or so. A tall order. I decided to try. I gunned it, and then I started thinking of my Dad and how although he never got to witness me race in person, he was probably watching at this moment. I was passing people and putting the pressure on my legs and lungs. It was really hot out by now and the sun was on top of us.

Cruising up 72nd Street I saw the finish and also saw a few guys flanking me, attempting to pass. I threw it into overdrive and blasted forward giving it all. I have no idea what my time was for that last mile, but I do now it was the fastest of the race. 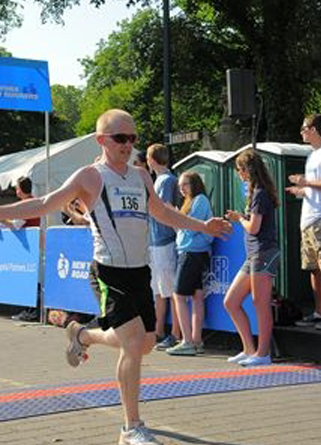 This was my ‘Peter Pan’ landing…

After a pear and some water, I marched over to the finish line and cheered on the rest of the runners waiting for Abbe and Erica Sara to finish. They came through, Erica Sara first then Abbe like 10 seconds behind her, both looking very strong!

We had some coffee and then took off to hit the showers.

For lunch Abbe took me out to ABC Kitchen in Union Square. It was amazing!

Then, we went to Brooklyn (I know, wow! so far!) to my friend Dimotta’s birthday party at Berry Park. I saw Dimots, Mirko, Lauren and Molly among others who I had not seen in some time. It was great catching up.

Next up, I took Abbe out to Dinner at Robataya in the East Vil. It’s a fairly new restaurant owned by the same guy who owns Sakagura, my all-time favorite restaurant! We had a plethora of Japanese food, all prepared with such detail. It was amazing. Abbe said to me that night “This should be great fuel for our workouts tomorrow!” We would come to find out that Japanese food is exactly the wrong food for pre-workout dinners. 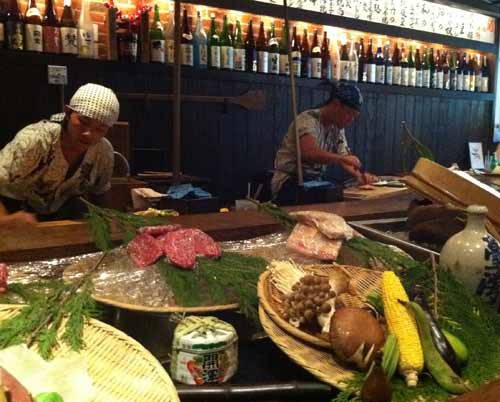 As I woke Sunday Coach S had me queued up for a 4 hour ride to Nyack. Fun? Of course. Always. I would sleep on my bike if I could.

It was a hot, but beautiful day and I set out on my Tri bike ‘Andraste‘ with a smile. I hit a number of hiccups along the way which really discouraged me and as I saw my mood change I realized I was cranky because I was exhausted.

The South path of the GW was closed so we bikers had to use the North, more ‘walker friendly’ side. I think I carried my bike up and down 7 or 8 sets of staircases.

Once I was in dirty Jersey I got cooking. Then, another problem… there was a roadblock on the Palisades and a No Bikers sign! What? Not wanting to end my ride I ept going straight toward Englewood New Jersey where I discovered the biggest hill I had ever seen in the area. It was a set of 4 or 5 consecutive bomb drop hills! I was flying, tucked in, maxed out on my gears. Then, to the left I saw some bikers walking their bikes UP the hill and I got to thinking, “Oh man, I have to go back up this monster!”

That’s exactly what I did. Nice and slow with an easy heart rate I ascended all the hills returning to the bridge. Then I remembered you can go under the brige to the Park portion which is just as fun. That’s what I did.

I forgot how pretty it is over on the cliffs overlooking he city (where Alexander Hamilton and Aaron Burr dueled many years ago). 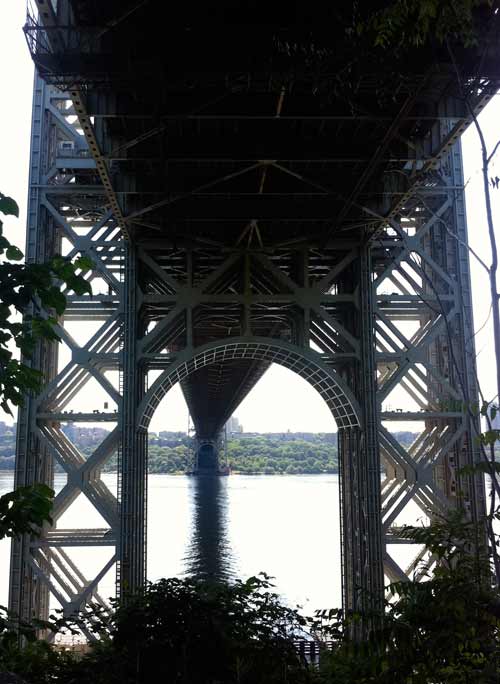 45 miles and 3 hours later I returned home, ready for a shower, lunch and to put my feet in some cozy sneakers. 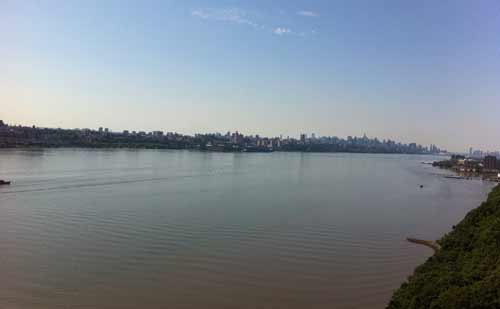 It was an awesome weekend of races, workouts, adventures and food!