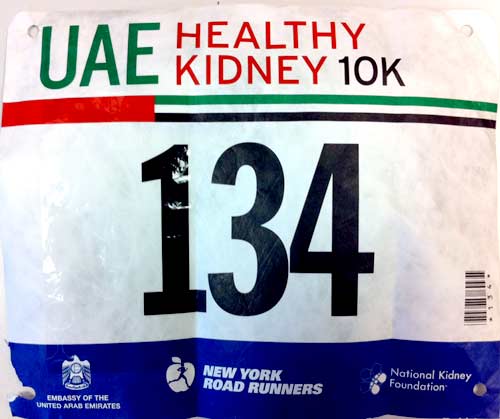 The Healthy Kidney 10K is unlike most of the other 10K’s in the New York City area because it is sponsored by the United Arab Emirates and all of their money. Therefore, there are a lot of big players in the running circuit that come to town. Seriously, the winner gets $25,000 plus the bonus $20,000 if he (yes ‘he’, for some reason only boys are eligible. Take it up with HR.) breaks the course record. I WISH I could win that much cash running on what I consider my backyard!

What I was looking to accomplish in this 10K? Well, put my D-tag on correctly and not attach the instructions as I had for the Scotland 10K! I didn’t put any requirements on myself. Deep down I have wanted to break 37 minutes since last year’s 10K PR at the Healthy Kidney (37:11) but was really just excited to ‘race.’ Coach Sonja has me doing a lot of slow work (which has shown results!) so I get excited now when I get to use my speed.

The day before the race I was queued up for a 1 hour trainer ride from hell. During the entire hour I had to maintain a 145 HR. For those not familiar, this is high for the bike and like a race pace. After sweating my brains out, I then had to throw on my kicks and hit the streets for a 30 minute run!

That night Abbe and I fueled up with some Pasta Primavera I cooked up. It was delicious and filled up the gas tank. Asleep by 11PM!

Awake at 6AM and fueling on a nice Cafe Bustelo/Stumptown hybrid blend I made by 6:15! Probably I should have had a more substantial breakfast than toast with peanut butter, but… I was having fun with my coffee.

Arriving at the start with plenty of time to spare Abbe and I met with Erica Sara and Melissa. My friend Dani also popped over to say hi! After a few high fives we all split to get in our corrals.

In my corral I saw 2 speedy runners I always run into on the course. We fist bumped and wished each other luck right as the gun went off! 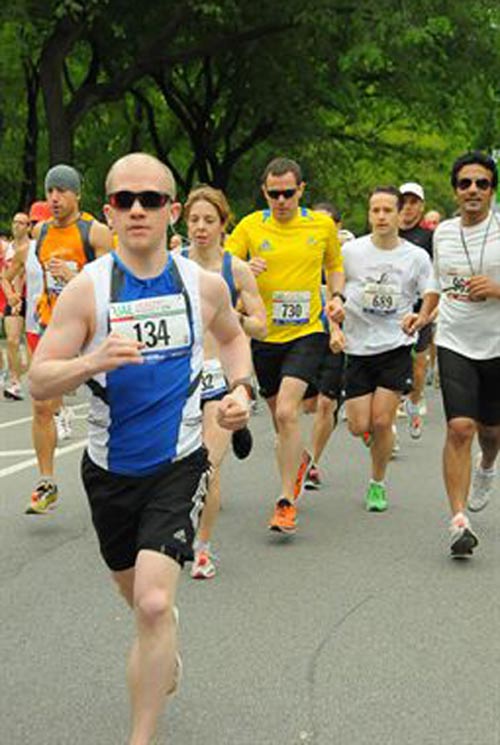 It was at this point I saw my friend Robert up ahead running with his friend Danny. From this point on I held them in my sights about 25 feet in front of me, trying to reel them in. I wanted to yell out to Robert, “Robert! I’m coming for ya man!” but realized it would definitely take much more energy then it was worth. Thanks to Robert for holding that pace because it helped me for sure.

Harlem Hill sucked just like it always does. I wonder if anyone ever says “Wow, what a lovely jaunt up Harlem Hill that was. So relaxing.” On the second ascent up the hill I really felt it in my chest.

SIDENOTE: For the first time ever I had zero pain in any part of my body, whether it be legs, knees, feet, arms, I mean nothing! What I did feel for the first time was the internal parts of my body in overdrive, like my heart. I was very in-tune with it and at times I would adjust my breathing to calm my HR down a bit. It seemed to work.

As soon as we leveled out on the top of Harlem Hill me and this other chap I was running with laughed about the hill. I was very excited as I knew the worst was over. Focus, move those arms, and keep my posture in tact.

Blazing (Hip Hop n R&B) past the 89th Street crossing I saw Elizabeth and we had a yelling exchange. Soon after I finally caught up to Robert. I like to kinda sneak up on my runner buddies, so I just run right along side them until their like “Who is this guy over here all flanking me and stuff?” Then, they look over and are like “Baker!”  and it’s all happy times. BUT, it’s really not because we are on Mile 5 of a 10K and we are exhausted.

We paced each other the rest of the way and I have to thank Robert again as at one point I was falling behind and he told me to keep up my pace. I did. 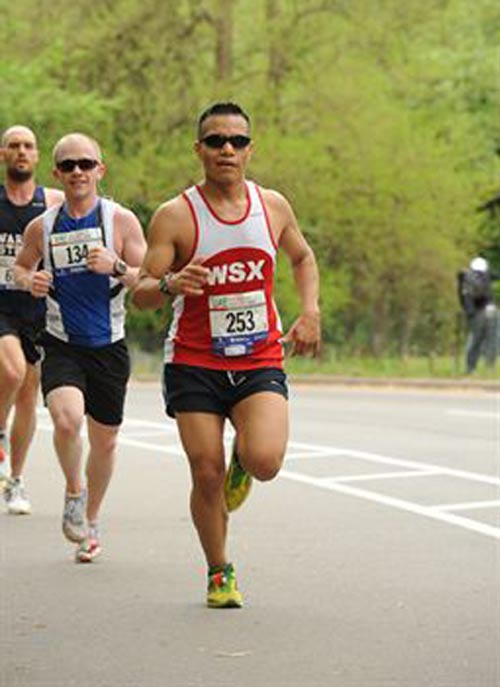 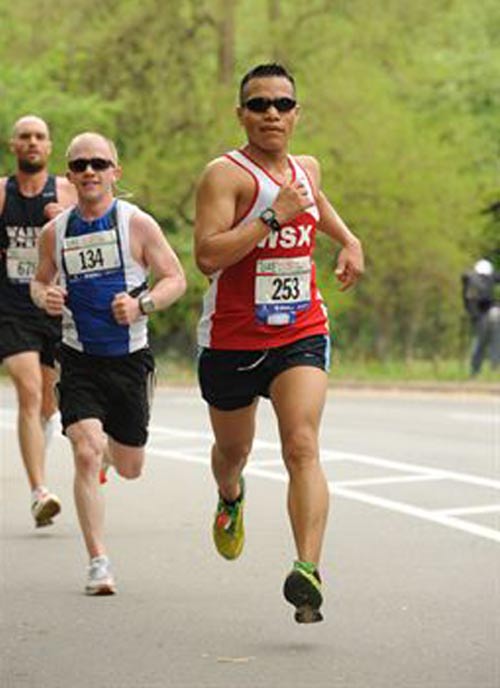 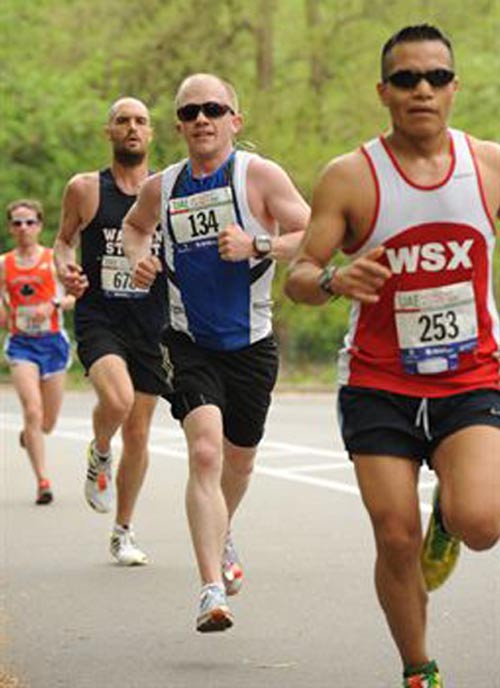 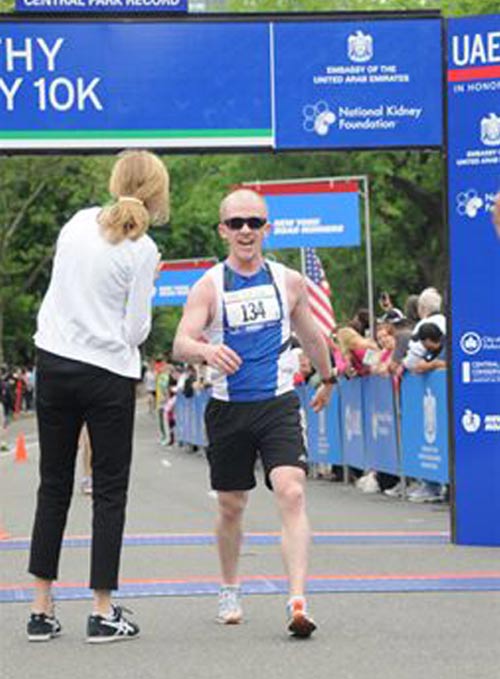 I met up with Robert, Antonio, Danny and Helen right after and we celebrated our race. 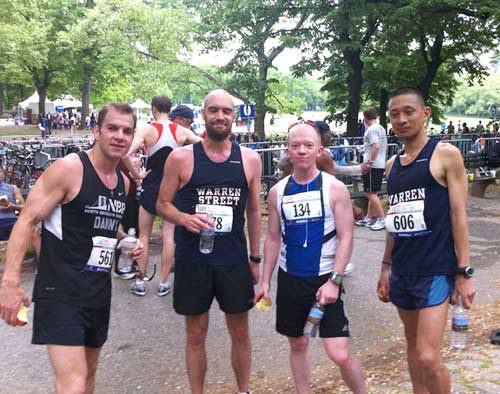 Right after that I ran into my friend Kevin and Micheal and chatted with them for a hot second before I realized I was holding up the Front Runners Team photo! (my back was to the camera) Sorry guys! 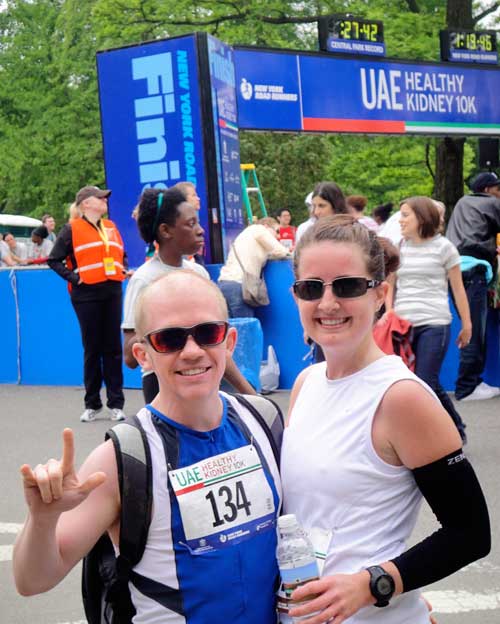 After getting my bag I ran into my neighbor (and fellow blogger) Kelly who had a fantastic race, then, back at the Finish Line I got to see Abbe finish! We waited for Erica Sara then the 3 of us went off to find the Joyride Truck to get some Balzac (which is a blend of coffee). We sat on the steps of Lincoln Center pondering the meaning of life and other fun facts. 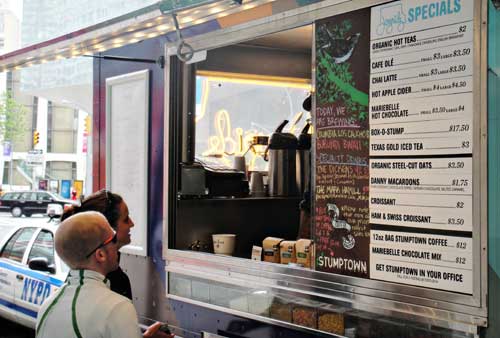 SIDENOTE: While we were sitting on the steps having coffee this guy on a bike pulled up and asked where my skateboard was?! It turns out he rides past me on Park Avenue everyday while I’m skateboarding to work! What a small town! 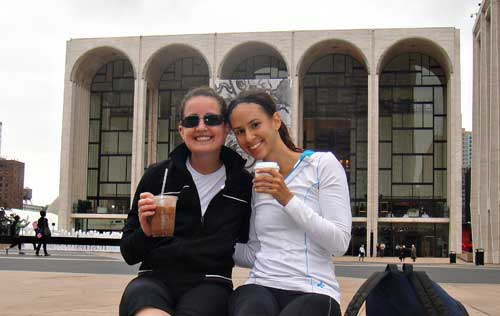 It was a great day for all our runners and as if it couldn’t get any better, Maura and Bryan
(of the Runner Army) were throwing a party later that night. In attendance were Abbe, Erica Sara, Elyssa, Maura H, Neal, Robin and our gracious hosts! It was a really fun time and capped off an excellent day.

« How I became a Runner.
My New Newtons »