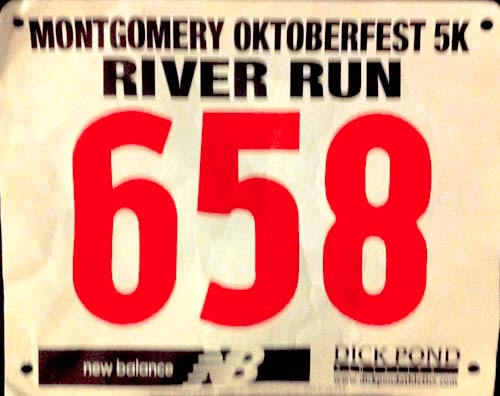 A dear friend of mine, Mike Bowman (or ‘Bowman’) was getting married in the Chicago suburbs October 1st. In preparation for the trip I said to myself, “I should run a race out there since I have never been.” After some difficult research I signed up for the Montgomery River Run 5K Oktoberfest celebration. It was at 9AM the morning after the wedding. Crazy indeed.

I left at 5:30AM Thursday morning to catch my flight. It was relatively painless, although I was up so early I felt like I should be running a Half Marathon or something. “Runner Brain.” 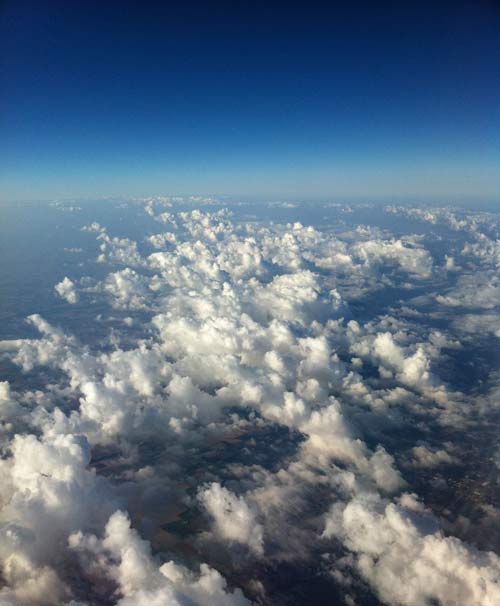 I landed at O’Hare roughly around 9:30AM and had until 4PM to get out to Aurora (a suburb 60 miles west of Chicago) and so I decided to have an ‘Adventure.’ Rather than take the $100 cab directly to Aurora, I took the subway into downtown Chicago to check it out, since I had never visited.

Here is a note to all you Chicago Marathon runners, they are ready for you! Unlike NYCM, there were huge ads and billboards canvassing the city to let everyone know what was coming.

Chicago is great. It’s very clean, has a pretty skyline, and the subway is efficient. I walked around for awhile and then had lunch at a pub.

I took another train out to Aurora and then checked into my hotel. Since all my friends were busy I went for an 8 mile run to explore town and pick up my race number.

That night was the rehearsal dinner and I got to see a lot of good friends.

ROLE CALL!!! Brendan and Stacy, Jeremy, Grant, Leigh, Kevin and Joan, Matt and Kate, Katie, and of course the wedding couple Bowman and Kim. I also made friends with some new people, Eric and Phe, Jay and Snake.

After dinner Kim’s brother Kevin took us all to a ‘speak easy’ of sorts. It was called The Phoenix Club, located in a town hall. You had to be a member to get in and there was a key card swipe to access the bar. This was not the speakeasy that Al Capone frequented. Bright lights, and lots of wood paneling… think truck stop meets Midwest bar. None the less, it was fun. They had the local beer for 75 cents per beer. It was called Old Style and if I knew now what it would do to my head the next day I would have spent the extra 25 cents for a mainstream beer.

We stayed out till 2AM or so and had a blast. All of us as a group haven’t been together in at least 10 years!

The next morning it felt like a squirrel was eating my brain, thank you Old Style.

Jeremy, Eric and I explored the town some more and ended up at a casino for awhile. Nothing like a little roulette at 2PM on a Friday…

The wedding was at 4:30PM so after a shower and getting ‘suited’ up we all made our way to the ceremony. It was really beautiful, set on a gazebo-like structure. The reception immediately followed and everyone jumped into party mode. 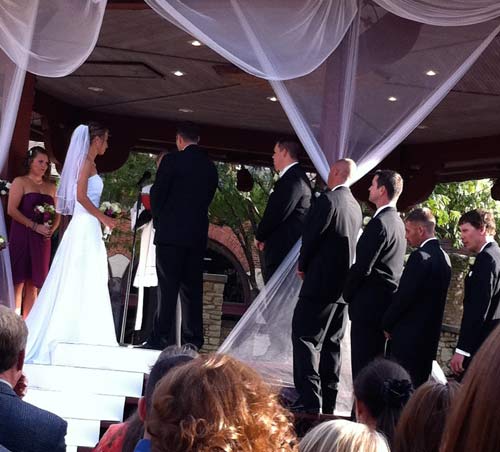 At midnight, after a thorough amount of drinking and dancing, I called it a night. The rest of the gang stayed out till 3 or 4 in the morning. A few of them woke me up at 5AM upon their return to the hotel room to give me all the details of what I had missed. After a little coaxing I convinced them to let me sleep as I had to be up at 8:30AM to race.

In an email dated September 14th to the bride and groom, this was my response to the 5K, “I’m gonna sign up for the race and win it the day after your wedding in honor of you kats.” This was my intention all along, but I was worried about pulling it off. SIDENOTE: I sometimes call people ‘kats’ as in ‘Cool Cats’.

I grabbed a cup of coffee, then Jeremy and I headed out. He was my ride to the race and I am really thankful for him agreeing to do that, otherwise I might have had to run to the run. Ha.

Arriving at the race start, which was the local fire station and town hall, we found Eric waiting for us! He wanted to see this thing go down too. It was sunny and 50 degrees, running perfection and the epitome of Fall.

Everyone knew each other and were kinda milling about. Eric and Jeremy were smiling and they walked over and were like “Baker, you got this man, you can do it!” As I responded with, “Guys! Don’t jinx me!”

The start line was a crosswalk. Yes, it was a small town race. Around 9:15 people decided we could maybe start the race so all 144 of us were huddled in the street. There were a few serious looking runners there geared out and jumping around. A man standing in the lift of the fire truck called the start and then fired the gun.

Taking off in the front 5 runners or so I made the quick decision 50 meters out to just go for it ad I blasted ahead.

There was an ATV leading us down the town roads. It was a pretty simple course in a rectangle. At Mile 1 there was a volunteer and I yelled (as a joke) “How many miles is this thing?” Looking worried she yelled back, “It’s a 3 mile race and you just ran mile 1 in 5:45! Keep going!” I guess my race humor can be a little much at times.

I don’t like to ‘look back’ during races, but if there are turns I do glance back. I did this at one of the turns and didn’t see any runners. I found this odd and had I not been following the leader ATV I might have thought I took a wrong turn.

I felt good and was cooking, but I didn’t feel like I was pushing that hard. Rounding the final turn to the last 1/2 stretch I got pretty excited at the prospect of winning. The finish is a down hill and there were about 10 people (including Jeremy and Eric) cheering us on. Jeremy and Eric were really excited and totally making a cheering ruckus! As I crossed I threw a hand up and yelled “For Bowman and Kim!”

I got high fives from the fellas and then we cheered on the rest of the runners as they came through. My time was 18:24 which I was happy with even though it wasn’t Sub 17 which is my new 5K goal. Second place came in 50 seconds later followed quickly by the third place guy who was close to overtaking him.

I won a plaque for first place. We couldn’t stick around to watch all the awards as we had to get to the Wedding Brunch which would be ending in the next 30 minutes. 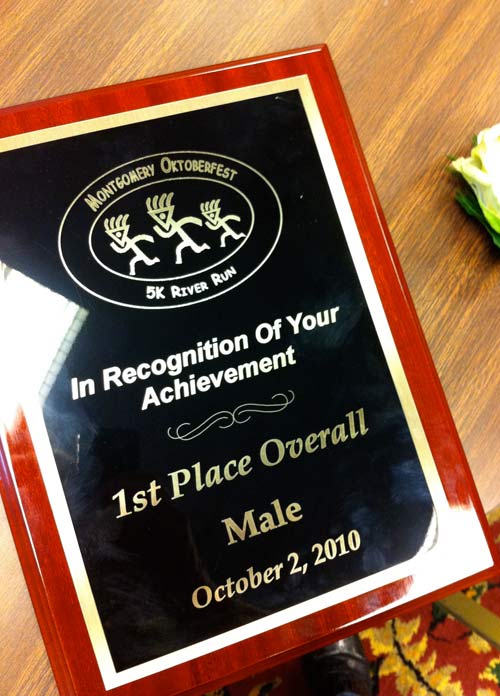 Arriving at the wedding brunch there were looks of disbelief, then loud cheering! Everyone wanted to hear how the race went down. Some people wondered why on earth I would want to run a race the morning after a wedding? I have no logical answer for this question accept that if you know me, then you know why.

I gave my trophy top Bowman and Kim as a wedding keepsake. 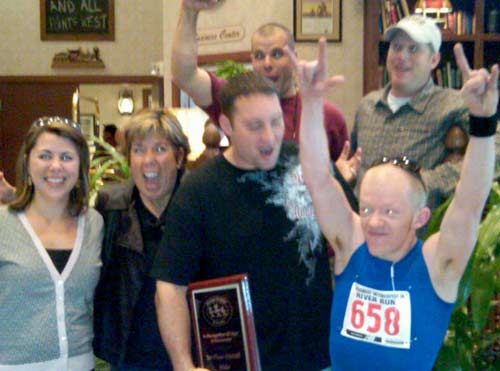 Most of us said goodbye shortly after. A group of us decided to go into Chicago for lunch to kill time before our 7PM flights. I got to be a tourist in a big city for once, instead of being the tour guide. It was actually pretty fun. After lunch we all went to the Willis Tower (formerly known as the Sears Tower).

It was awesome! They have these clear glass boxes you can stand in and you are literally 1200 feet above the streets. I wont lie, I was scared. 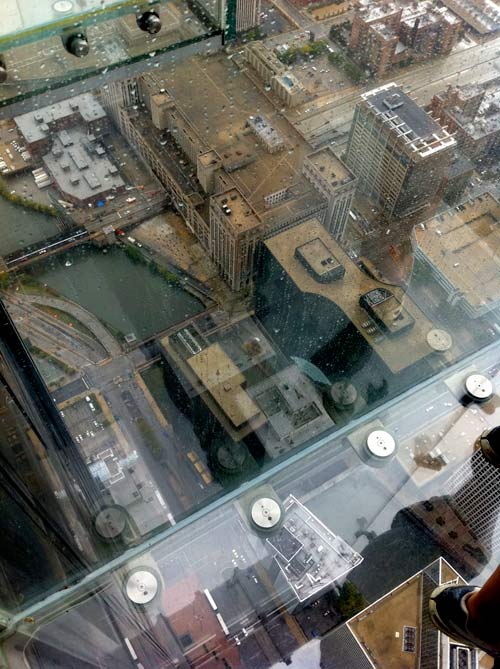 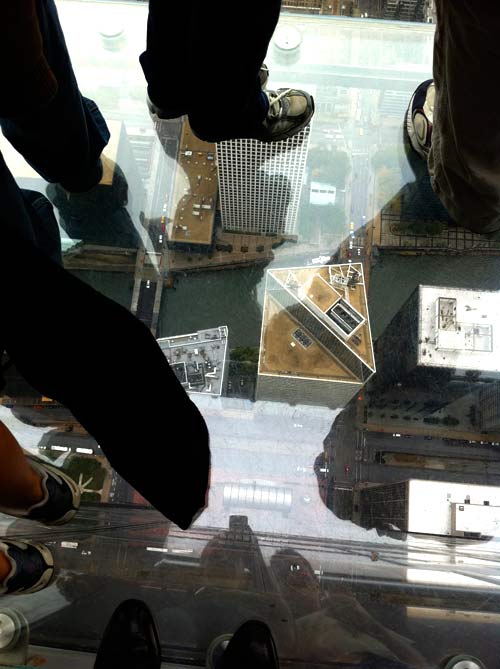 At sundown we headed to the airport to leave the windy city. It was an amazing trip that once again made me realize how great it is to see friends you haven’t seen in ages, and everything is still the same as it always was. 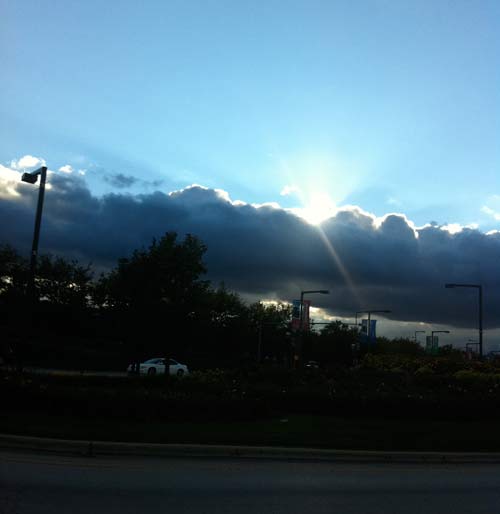