On Friday, if you had asked me what I was going to do Sunday morning, an 18 Mile race would not have been on the agenda. But, I can succumb to peer pressure quite easily under the right circumstances.

Saturday morning at 7:45 I met Jim of ‘Dad Posse’, Gio, and Anne Marie for a 50 mile bike ride up to Nyack. It was a little chilly but once we got cooking our body temperatures got regulated. We were cruising at 18-20 MPH for the majority of the trip. A highlight for me was clocking 39.6 MPH on the big state line hill. I was spinning out my top gear and just had to tuck into aero position to try and max out my speed. What a rush!

We stopped at Runsible Spoon for refreshments (of course). I can’t resist their Banana Chocolate Chip muffins. They are like ‘Muffin Crack’ to me.

During the ride home Jim notified me that he was running the 18 Mile Tune-up in the morning. I was going to do a long run on my own anyway so I wasn’t really interested. That is… until he told me it was an actual ‘race’ with bibs, timing chips, national anthems and all! SOLD.

We rode over to NYRR on the route home and I signed up half thinking “This is a bad idea. I really want to sleep in tomorrow, especially since I’m going to a concert tonight.”

In the late afternoon I made 3 ‘Race Burritos’ then met up with Ahern, Robin, Billy, and Jess to have some pizza before the show. We then headed up to Central Park for the Broken Social Scene concert! I love Broken Social Scene and this would mark my 4th time seeing them. If you like concerts, they never disappoint! On 3 occasions they played for 4 hours straight!

Robin and I were really excited when we saw that the Summer Stage had beer tents! Score! I also told her, shaking my head “I will be back at this spot in less than 10 hours to run 18 miles.” 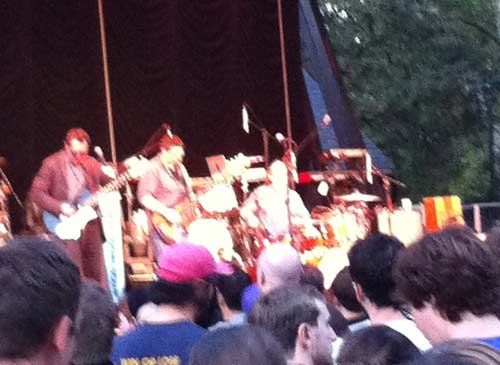 Another surprise was that the opening band was The Sea and Cake! I’ve never had the opportunity to see them live and they are also a favorite.

To sum up BSS, they rocked as usual! As the show was closing I led us out a back gate to avoid the crowds. Countless races ending at the Bandshell will definitely improve your Central Park navigation skills! 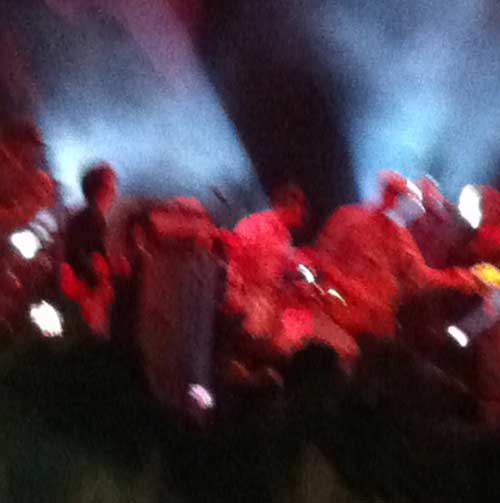 We ended the night at a pub eating hot dogs and drinking beer. Not ideal pre-race food, but we were having fun.

In bed by midnight…

Woke up feeling pretty good, but a little malnutritioned. I had some Cafe Bustelo and popped out front to meet Jim at 6:30 and we biked over to the start.

It’s always so cool to see the thousands of people migrating to the start of the races. It’s something I always embrace, thinking about the millions of people sleeping at that moment who have no idea this is even happening.

At the baggage check I ran into my friend Dani who has been running with Team in Training. This would be her longest run ever and she would do great! Heading to the corrals (and chowing down on a ‘Race Burrito’) we saw Josh, Joe, and Sharon gearing up!

As I entered the blue corral, I immediately saw Daniel hanging out in the center so I made my way up to say hi. A weird thing we noticed… no national anthem! My goal for the race was to finish in 2 hours which I knew would be a long shot.

As the gun went off we kicked it up and took off. We were chatting about various running/triathlon related things before we parted ways at Harlem Hill. We had different goals and pace times for the race so it wouldn’t have done either of us any good to stick together aside from the camaraderie and jokes!

Happily hitting the apex on Harlem Hill I thought to myself, “I have to do that 2 more times before the day is up. Yikes Scooby.”

Coming into miles 2 and 3 I was on target with my pace of 6:30’s. SIDENOTE: I’m like the worst pace keeper ever. I just like to run as fast as I can all the time which tends to mess me up during marathons. Duh.

Trucking along the west side heading south by the Sheep’s Meadow I was trailing a few really fast runners, one of whom was easily 60 years old. We were playing leap frog for the next 5 miles until we started our second loop. This guy would then jump ahead of me and finish a good 2-3 minutes before me. I kept thinking “Wow! This guy is amazing. If I see him at the finish I would like to shake his hand.”

Ascending Harlem Hill for my second time I did a once over, aka: Systems Check. Legs, knees, heart… was I hungry or thirsty? Everything felt good so I held my pace. It was right about here that I saw fellow runner and twitter friend ‘experiri’ cheering me on. He was volunteering so I would see him a few more times. Thanks for the encouragement along the course. it really helps!

One thing that always kills me on multi-loop races in the park is when there are overlapping mile signs. For instance, I was on mile 9, but right next to it was mile 15 for when I came around again, thus reminding me that this thing was far from over!

By now I started to use some visualization to get through the remainder of the race. I would speed through the course in my head, as if I were on my bike, preparing for what was ahead. It gave me moments and markers to look forward to, making the course seem smaller than it actually was.

By now I had started catching up and lapping the slower paced runners. It got crazy crowded, but I really liked it because I enjoy having lots of other runners around, all of us on the same mission.

I had planned to eat my ‘Race Burrito’ (that I had been carrying this whole time) at mile 10, but I decided to wait until the final Harlem Hill approach which would be mile 13. It was delicious as usual! The trick, in case anyone ever attempts this, is to eat it one half mile before an aid station so you can wash it down with your choice of Gatorade or water. It was here that I saw Matt6 and Steph (who were volunteering). They gave me a huge shout out which lifted my spirits and sent me flying down the street.

Making my way down the west side again, the pain in my calves was really kicking in. I tried to ignore it and do some more visualizing. Once the energy from the ‘Race Burrito’ processed, I started feeling better. Crossing mile 15 I also said to myself, “3 miles, Baker. You got this!”

By this point, coming up the east side, the sun was blinding and I tried hard not to run into other runners or random people crossing our path.

With 2 miles to go I realized I might obtain my goal of finishing in 2 hours, but, I would have to run both miles at a 6:30 pace on the dot and my legs were burning bad. Mile 16-17 might have been the hardest and that 6:30 mile didn’t happen by any means. But, for some strange reason, the last mile I felt really great and kicked it up. Maybe it was the finisher chute? Maybe because I knew I could stop running? Maybe it was that box of tasty bananas they always have waiting for us?

I came through the finish at 2:01:32 and got to high five Matt6 and Steph as I crossed! Awesome!

I immediately chugged two cups of Gatorade and one water. As my body slowed everything down, I started to feel great. I hung out at the finish for another 30 minutes cheering people on as they came through. Daniel popped in, then, to my surprise Josh gave me a sweaty Speedy Sasquatch hug as he crossed.

It was a great day for a run and all of us had success. I always get a little teary eyed when I look back on races this distance or greater, thinking about everyone and our accomplishments as runners. It’s truly amazing.

Later that night Erika and I joined a few fellow runners to welcome our friend Sarah Stanley to the big apple! She has been biking all week from D.C. and stopping along the way to teach young kids about childhood obesity. Congratulations Sarah!