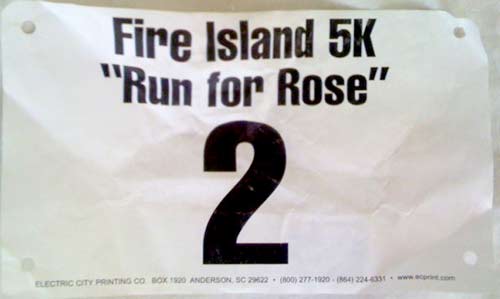 The “Battle for Fire Island” is what I’m calling this weekend’s race. Why? I had won this race randomly last year which was great, but the amount of pressure I felt coming back to defend my title was ridiculous!

Erika and I left Friday afternoon, set to arrive around 7PM. It’s really quite fun getting out to Fire Island, especially the ferry ride. This is a picture of some guy sleeping on the van ride that reminded me of ‘Weekend at Bernie’s.’ 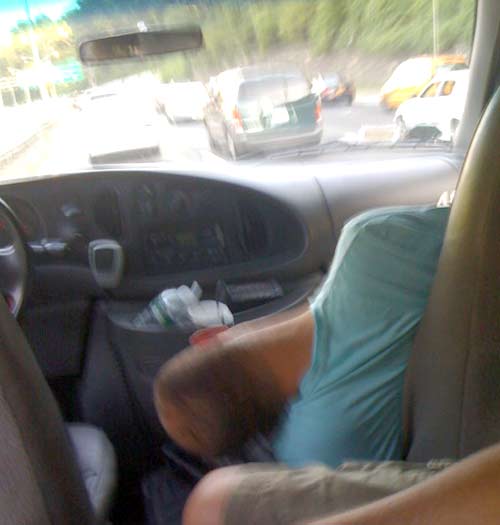 It was a “Dad Posse” weekend if you will. Ed has a hotel out there (insert plug)… The Fire Island Hotel, which is the hub of the race every year. It’s also a really fun laid back hotel right on the beach complete with a tiki bar.

The gang for the weekend was ROLE CALL: Ed and Annelise (Jack, Isabelle, and Ben); Jim and Lisa (Josephine and Elizabeth); Mike and Kara (Kelly and Kevin); and finally Todd and Ila. (AND Louie and Bella… see photo) 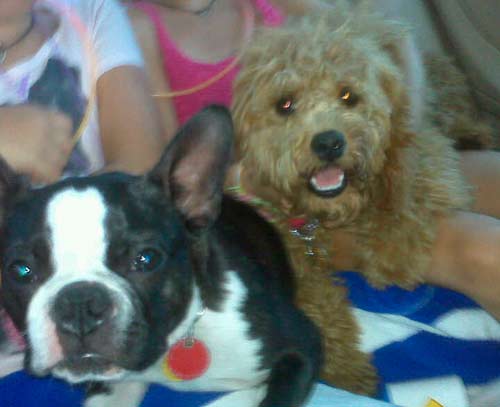 After checking into our room, Erika and I hit the tiki bar ‘Hurricanes’ and had some pina coladas and apps before heading over to Ed’s house which is right next to the hotel. At ‘Hurricanes’ a big group of gals came in… a bachelorette party. While they were contemplating what shots to take I realized that I recognized one of the girls. I looked over and simultaneously we both said each others names laughing. It was Amanda, Ed’s niece who I had run a few races with over the winter. Erika and I spent the rest of the night over at Ed’s socializing and catching up.

Saturday morning Erika took off for a 4 mile run (she wouldn’t be racing Sunday) and Ed, Mike, Jim and I went over to the bay for a 1/2 mile open water swim. Wow! Amazing and I really needed it. As Ed was saying, there is something very natural about swimming in open water. We also needed the training as the Harriman Sprint Triathlon is the following weekend.

The rest of the day we all congregated on the beach. It was a beautiful day. Frankie showed up to hang for a little while followed by Todd. Ila had to bail on the trip as she was sick unfortunately. We built giant sandcastles, played football in the ocean, and body surfed. It was awesome. I was in some serious need of beach time and this was doing the trick.

We had a huge feast at Ed and Annelise’s house that night in preparation for the race. We carbo-loaded on beers and had birthday cake and cookies in celebration of a few of the youngsters’ birthdays. We all crashed between 11:30 and midnight I think.

We were all up around 9AM Sunday. The race didn’t start ’til 10:30 AM which is cool on the sleep tip, but very scary on the heat factor.

Ed’s house is basically right in front of the start line. It’s so cool because you can literally hang out there having coffee and bananas (which is what I was doing in fact) up until like 5 minutes to gun time, then you just walk out his front door. 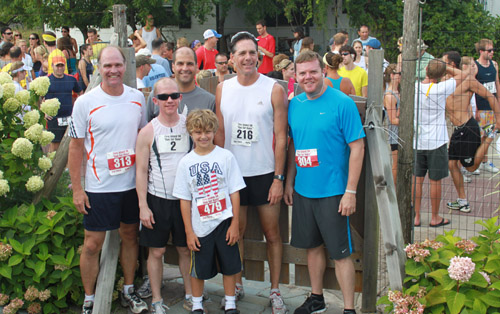 There were 2 waves this year as the race has almost doubled in size! It’s put on by Anthony and John DiGangi who I have become friends with over the last year as they do a lot of the local NYRR races and triathlons. The 5K’s purpose is to raise money and awareness for the American Brain Tumor Association.

“In 2006, Rose DiGangi was diagnosed with a Glioblastoma, a malignant Brain Tumor. After a courageous battle, Rose passed away on October 20th, 2007. In her memory, the DiGangi Family will continue to raise awareness and support for Brain Tumor Research.”

A few minutes to 10:30AM those of us in wave 1 walked out to the start line. I said hi to some of the guys from last year. It’s a pretty friendly race.

SIDENOTE: 30 seconds to the start the clouds dissipated and the sun blazed high and strong. Wonderful. It was now 85 degrees and climbing. 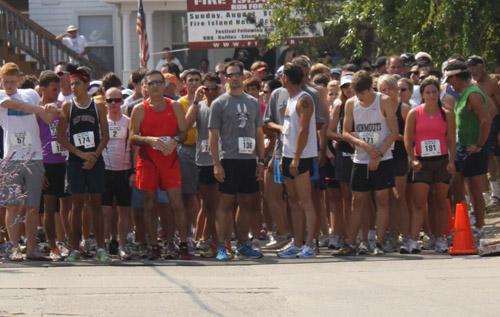 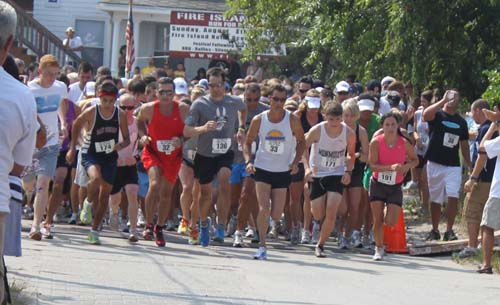 Just like last year, I hung one row back, trying to be discreet. The gun went off and it was a mad dash to take lead. I was boxed in right away but we weren’t going too fast so I just pushed through the crowd and took off. I was half thinking that this technique will either benefit me or cost me a good race time. 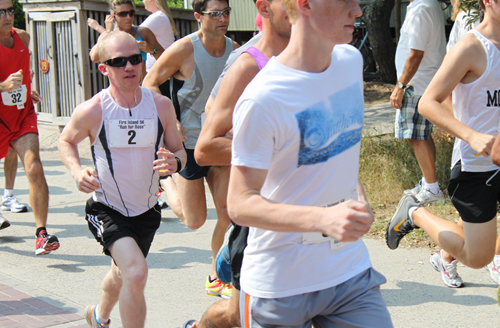 Half a mile into the race I was like “Wow, this is hard being in the lead and not knowing whats going on behind me!” Most of you runners out there will agree, chasing people down and passing them in a race is very fulfilling and gives you something to focus on. Here I was just running as hard as I could with no end in sight! At certain points where there were crowds I yelled “How far back is #2?”

1.5 – 2 miles in is where it started to really get hard. My legs got heavy and I was overheating. It’s a 5K so it’s not like there are aid stations around every corner, but when I did see one, i grabbed water dumped it straight on my head. It was so hot and I was so delirious I was teetering on walking and/or calling it quits.

At this point I could feel someone catching me. He slowly approached and we joked around for a bit, me asking him “Hey man isn’t the race over yet?” His response was “No way man, 1 mile to go.” We ran together for a little while but as we neared the 3/4 mile to go area he picked up the pace and I’m pretty sure I slowed mine down. I kept him in my sights but I couldn’t muster up any more effort. For the first time ever I thought about running straight to the medical tent! 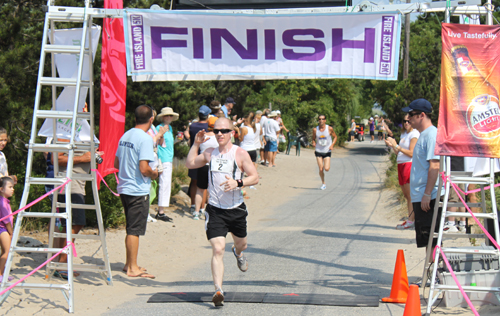 I rounded the corner to the finish line and just tried to hold onto the pace I was working with and try and muster up a smile! Erika was there and gave me a big kiss! I quickly left her heading straight for the water area. I took a big bottle of water and dumped it straight onto my head. As I looked up I saw Kevin and Isabelle laughing at me as I did this. Trying to explain a near death run in a lava field to 7 year-olds is difficult.

I walked over to the shaded tent where all the early runners were convening. I found the number one guy and congratulated him. His name was Sebastian and he was an 18 year old track runner from Bay Shore. He starts college at Albany in the Fall and has a good future in running if you ask me!

Jim came in shortly after followed by Mike, Todd, and then Ed and Jack. We were all exhausted and the general consensus across the board was that it was brutally hot!

The gals came and joined us in the shade once all of our runners were in.

The fundraiser after party is really fun. Heineken beer, hamburgers, silent auctions, a band… We all hung around re-carbing with some beers (all the money spent went to the ABTA so we weren’t drinking in vain.)

Around noon, we all gathered around as the DiGangi’s started the awards ceremony. It was really inspiring as there were runners as young as 13 clocking times like 25:14 and guys in their 60’s matching it. 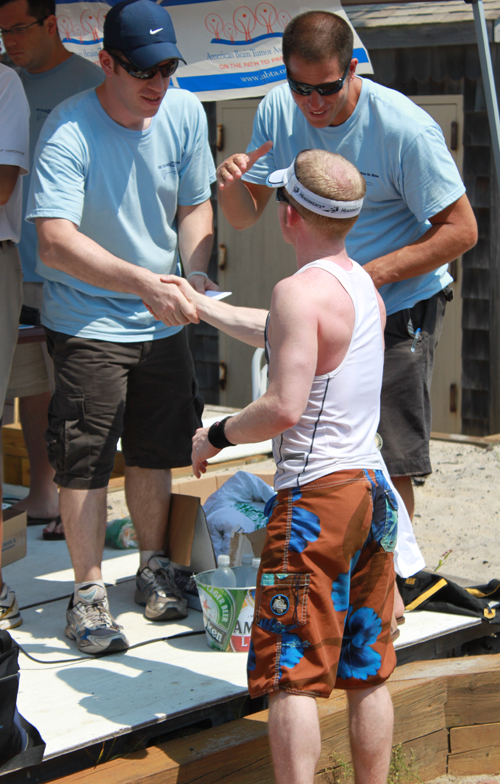 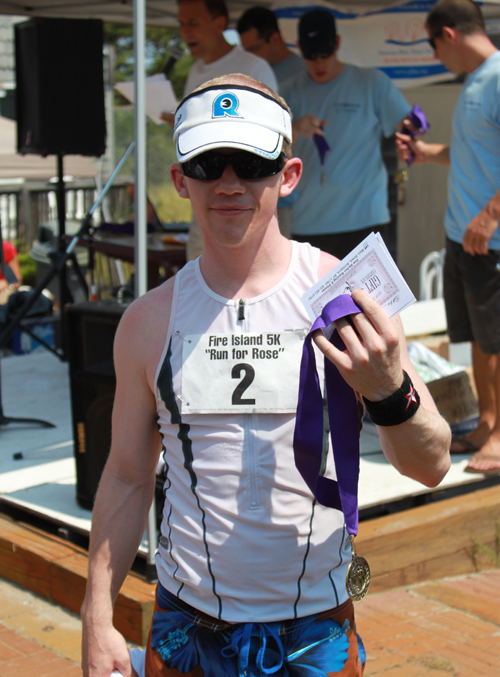 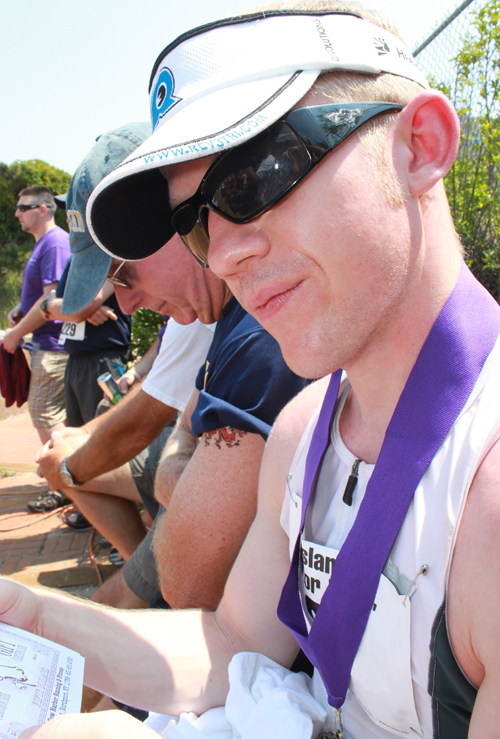 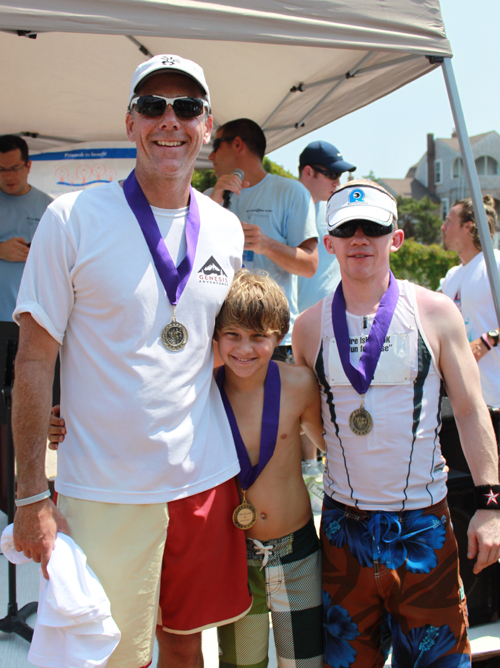 We hung around the after party for awhile then headed to the pool. Erika, Todd, and I left on a 2:50 ferry back to the mainland as we were all so tired. 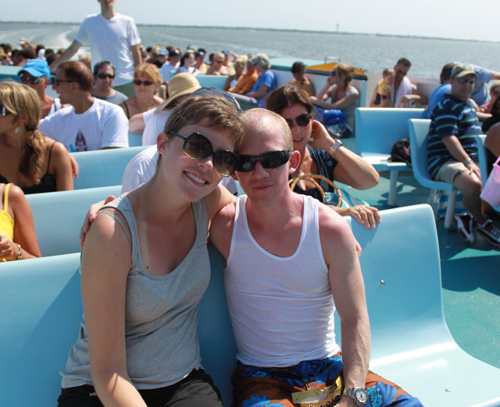 It was a great weekend and we all killed it out there under those rough weather conditions!

Big ‘ups’ to the Eschmann’s for once again being fantastic hosts. Thanks!