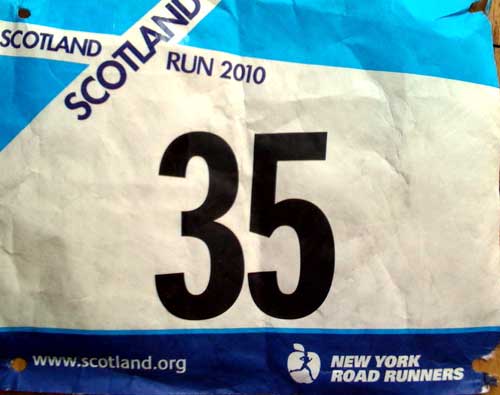 This week started out with torrential rain up until around Wednesday. It was miserable. Luckily, Thursday came around and was 70 degrees and sunny, not a cloud in the sky.

I had work off on Friday, so in the morning I biked around town and soaked it all up. I was sore all over though, the ‘got hit by a truck’ kinda sore. Why? Thursday night my presence was requested to help my good friend Todd (Swim Coach Todd that is) move his company’s office spaces. Lots of heavy things… desks, computers, couches, and yes… a soda machine.

Later on Friday afternoon, my brother and friend Matt came over to have roof beers. We lounged around for a few hours catching up before we parted ways, all of us having other engagements.

It was my piano teacher Sugar’s (and friend) birthday so she was having a dinner party down at Cafe Gitane. I arrived there with Walter and Amanda. It’s a really cool room in an old hotel. I am a history buff, so this was right up my alley. In fact, did you know that the survivors of the Titanic stayed there right after the incident? True story.

You runners out there know why going to a restaurant the night before a race is dangerous don’t you? Anyone, anyone? Bueller? Bueller? What if there isn’t any good pasta on the menu for carb-o-loading? There was only one pasta dish, the ‘baked pasta’ which was the equivalent to baked ziti. It was awesome. I quietly slipped out of the party around 11PM in order to get some rest before the race.

I had pancakes for breakfast, which were amazing! Then, I met my new friends Michael and Jay and we walked over to the race together. It was a beautiful morning and the Park was bustling with activity from every angle.

The blue corral was packed in like sardines by the time I got there so I had to post up at the very back. Whatever.

The gun went off and it took me at least 30-45 seconds to get going. Yes, it was a crowded race. Not to sound snobby or anything, but a slew of random slow people were in the Blue. We were bobbing and weaving all around them the entire first 1/2 Mile. Im not sure how they slipped through security…

For the first mile I was flanking the left side, pushing past people trying to get out into the open. As I was cruising I hear “Baker!” to my right. It was my friend Kevin Masse running along side of me! I hadn’t seen him in awhile since he took a running break after running Philly. We chatted for a hot second before he told me to get going. 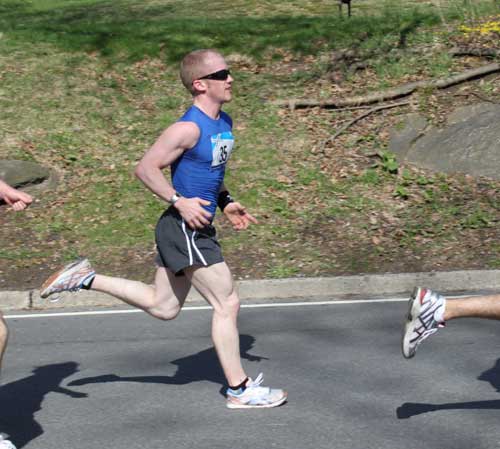 At Mile 2 things were getting better. Erika was there on the right snapping photos and cheering me on. Thanks Erika!

The Harlem Hill came up quick and it hit hard. It never ends man! I tried to push up the hill as best I could. Once we rounded the top corner and started to head back south I smiled big, knowing that the hardest part of the run was now behind me. I mean, I still had to finish, but there were no more monster hills.

By now we were a single file line of runners and were all cruising around the same pace. Mile 5 happened fast as well, which was a relief. Right around this time a few guys kinda boxed me out and were passing me. I just thought to myself, ‘let them go by, chase them down at the end.’

As we rounded Columbus Circle I was holding back… wait for it, wait for it… (not wanting to burn out right before the finish which I did once by starting too soon). 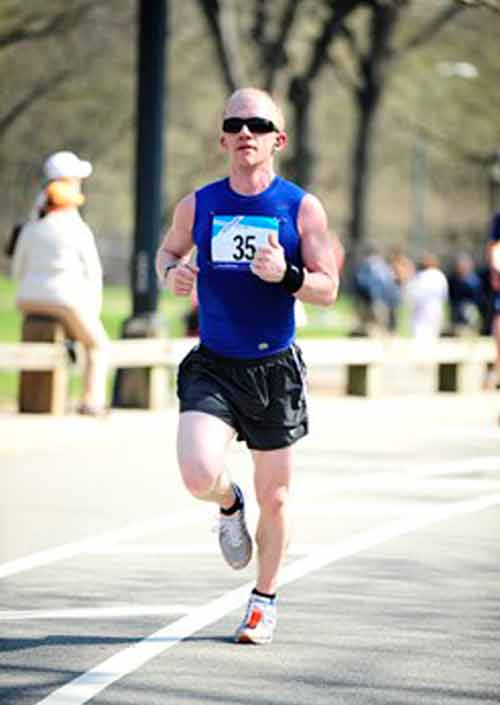 As soon as we hit the uphill and I could see the Finish coming into view I hit the afterburners and brought it into full sprint! I think I might have taken out 7-8 people that were in front of me, it was awesome! SIDENOTE: It’s true that sprinting past people at the end isn’t that big a deal if you aren’t contending for the 1, 2 or 3 spot, but for me, I get like a movie soundtrack ( the end of Teenwolf or Karate Kid for example) in my head and pretend I’m winning. It’s these little personal moments that make it fun for me.

When I stopped running I did feel extremely light headed and nauseous. This was the first time this has ever happened. I needed water, STAT! After slamming 2-3 cups I felt back to normal.

I finished in 37:59 which is a personal record by 10 seconds which makes me happy. What a great day for a run!