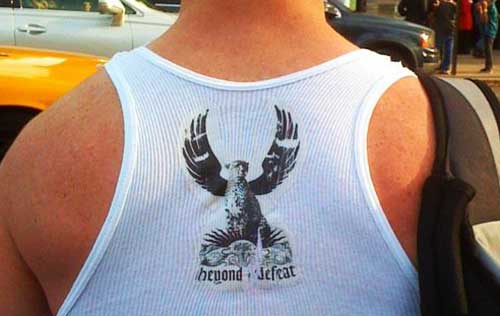 My 2 cousins Gillian (20) and Catherine (18) are pretty serious athletes. Aside from being sick basketball players they are also speedy trackstars, so once Jim and Ed of the ‘Dad Posse’ notified me that I would be running the New Balance Armory for Thursday Night at the Races I immediately contacted them for track advice on the 1500m and 800m.

Catherine: “yeah the eight hundred stride the first lap and give it your all on the second, it is going to hurt a bit.
the fifteen hundred run the first two laps around your mile split but a bit faster and then book it for the last lap.”

Gillian: for the 800: “get out fast and make sure you stay with the front people until the second lap. just give it your all. it comes down to who wants it more. make sure you read the runners and don’t get too far ahead of yourself.”

Cat: “i guess you should just listen to gillian instead…”

There was a blizzard in full effect all day Thursday expected to continue into Friday but no one was phased as it wasn’t sticking to the ground… yet.

I got off work at 4, headed home to gear up and met Jim and Ed at Local Bar by the A,C Train. We departed shortly after and made it to to the Armory by 6:30.

The Armory: This 60,000-square-foot Washington Heights arena—home to one of the world’s fastest indoor tracks—hosts a jam-packed season. The venue welcomes approximately 400,000 athletes, coaches, parents and fans from 1,000 high schools and 36 states to more than 100 meets each year. Also on-site is the National Track & Field Hall of Fame—an inspiring, enlightening tribute to the sport’s history. 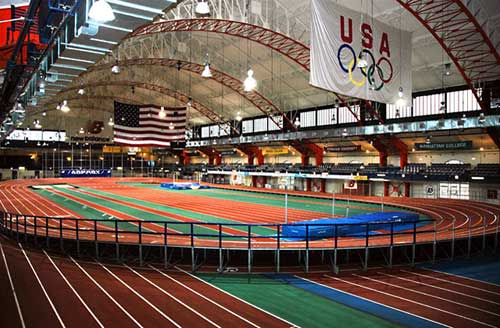 I have been to a few tracks in my day, but this one was really great. I was instantly intimidated. On the inner circle of the track were all these young people doing sick sprints and hurdles. I thought “Wow, I am in the wrong place, I am going to get my a$$ handed to me.” Luckily, just after 6:45 the announcement came on that all High School students at the earlier practice need to leave! So funny, after they did it equalized and I felt 100 times better, not to say that these remaining people didn’t look blazing fast, they just didn’t look like up and coming Olympians!

They made the announcement at 7 for all 1500m racers to go to the center area for heat seeding. I ran over, there were probably 30 women and 50 men. They had already started the first heat of the women’s race.

They broke us into heats based on what we thought we could finish in (honor system.) Being that I had never done this before AND that fact that I hate numbers, I was kind of lost. I waited to the 4th heat to be picked before  I jumped in. I think it was the 4:40-4:55 heat.

It was really exciting as I love watching track racing to begin with! Its very strategic.

As the third heat finished it was our turn to line up. I had butterflies and was in the 1 shute and ready to go. As he fired the gun we were off and I immediately pulled into number 2 position. Following the advice of my cousins I held back and tried to actually maintain some kind of pace.

We had 7.5 laps to run on the 200m track. It was really exciting but after maybe the 4th lap I was in pain. Sprinting for 1500 meters is hard! I was now in 3rd position and the lead guys were gaining on me. Every time I crossed the midway point Jim and Ed cheered me on from the stands.

On the last lap its like every one turned up the juice! I got passed by another really fast guy and this other runner with 100m to go. Not having it. I blasted into a sprint on the straightaway and caught the second guy who passed me but couldn’t catch the previous. I was wiped!

I was on a total bee-line for the water fountains. SIDENOTE: Bring bottled water next time. 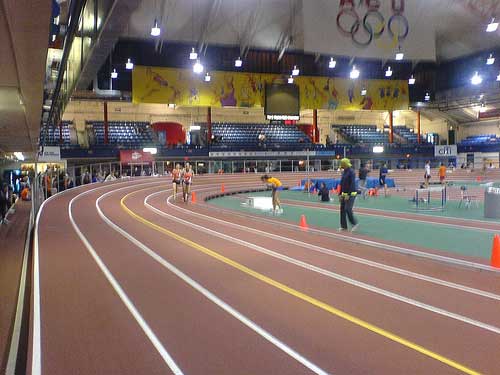 I ran into Christine there and said hello. We had never met so it was cool seeing her face to face. She was queued up for the 800m next so she bolted to get in her heat.

Since there was a snowstorm, the track meet wasn’t super crowded. Therefore, I had to run the 800m like 10 minutes after I ran the 1500m. Team Crazytime… my heart rate didn’t even slow up and I was coughing from he dry heat in the Arena. As soon as the women finished we were up. I put myself in the 4th heat again.

This time as the gun went off I was in 3rd position and we were in tight formation. We only had 4 laps to run and we were cruising through them every 30 seconds. My number 1 and 2 guys started putting some distance on me. Then, same thing at the last lap, super fast guy blazes past me. I try to keep up but its really quite impossible. I did however sprint at the end to make an attempt but couldn’t manage to catch and pass him.

Water fountain save me.

In my head I was finished racing. I went up to Jim and Ed and hung for a hot second before heading down for more water. Then, I walked over to chat with Christine and see how she was doing. We were laughing about our races when an older gentleman with a grey beard approached us. “Excuse me, would you two like to be on our relay team?” A relay? Holy crap! Ive never done that but always wanted to! I blurted out to the guy “totally!”

Evidently, Christine ran track in High School (I have no athletic background aside from ultimate frisbee) so she schooled me on how this would work. 10 Teams, 10 people per team, each team member runs 1, 200m lap 5 times to make the total distance 10,000m. It sounded awesome.

Our team introduced themselves to us. They were a group of guys from Tishman Contracting if Im not mistaken. All very cool. We got numbered as Team 5 in the race and also made it our respective team name.

The race began and it immediately became a blast! We were racing some serious teams such as Central Park Track Club and the Frontrunners (who my friend Kevin Masse is on but wasn’t there). Christine was off and then as she rounded the track I stepped up. Her job was to hand off the baton to me. As she approached I grabbed it and booked! Its such a relief to have to just sprint one 200m lap! As I came around I sped up and ran along side my hand off guy (number 6 in line) before pulling off to the left. WOW! I could get used to this.

In my poor calculation of mathematics I was under the impression that we all had to run 10 legs of the race. It wasn’t until I overheard another team member say ‘only 4 to go’ I realized it was only 5 legs. Sweet! I could really blast off.

I hung with Christine and we laughed at the insanity of it all. I was really enjoying the camaraderie and the cheering. For sure we were not the fastest team out there but it was so fun! The next time I went I learned that I could actually run with Christine before she made the handoff increasing my take off speed. My goal each lap was just to find someone to chase down and pass.

The whole thing ended in around 30 minutes. We stuck around and watched a second 10,000m relay for a bit then head out to grab a bite. As we opened the doors a blast of snow came in. It was at that point we started to realize that this storm was for real! There was 4-6 inches of snow that had accumulated while we were running!

I said goodbye to Christine (she had to work the next day regardless of snow) and the rest of us hit Coogan’s Bar.

We grabbed a table and right off the bat we noticed the numerous track jerseys hanging off the ceiling. It was a track and field bar! Looking around I recognized some faces from the meet, sitting and having a post race drink and meal. Too cool.

As soon as we got situated a big group came in and what do you know, it was my relay team! They sat next to us after saying hi and thanking me for being a part of their team. Really, some stand up guys.  As our drinks came the server notified Jim, Ed and myself that my relay team leader had bought that round! We all cheered each other. After wolfing down some food and a few pints we hit the subways. I slept like a rock!

It was an amazing time and I made some cool new friends. Track Racing is such a different ball game from distance running. Its very similar to race car driving with its drafting strategies and sitting back a few places waiting to make a move. I will totally do this again especially if I get to be on a relay team!