Last night (having beers with Abbe and Claire) an idea came to mind… if a blog is so full of race reports and serious triathlon stuff, shouldn’t it also have some fun rants about life to add balance to it’s content? Totally!

I give you, ‘F*%K THAT, Friday!’ a commentary on stupid and annoying things that may have happened during the week. If you have a blog, feel free to post your own!

1. Why are there so many people on Park Avenue hailing cabs, making my skateboard commute all the more challenging? Oh right, the Subway was broken today! F*%K THAT!

2. I lost one toenail due to Ironman and now, the one next to it is falling off thanks to Grete’s Great Gallop Half Marathon 2 weeks ago! F*%K THAT!

3. How come every time I go into my local bodega the price of Half-n-Half fluctuates by a few dollars?! F*%K THAT!

4. Why is there a hurricane blocking me from getting to my Dominican Republic vacation tomorrow?! Not cool Sandy. F*%K THAT!

Moments ago I was listening to the band Morphine’s ‘Cure for Pain’ and started laughing out loud. I’m about to run my second marathon in under 2 weeks and it seems that I am ‘looking for pain’ not it’s cure.

Most of you reading are some form of an athlete whether you consider yourself one or not, being a runner, triathlete, swimmer or a soccer player. Why, as athletes do we quest for this pain? Maybe it’s just that runners are a bit crazier than the rest of the lot?

For me, I think it comes down to battle, or rather it’s modern equivalent. When I am 16 Miles into a Mary, I am deep in battle. It hurts everywhere, my senses are heightened, and the only thing that matters is pure survival. Last week’s Boston Marathon was a perfect example of that since the only thing I was concerned for at Mile 16 (or maybe even Mile 9) was surviving the race and getting my medal!

This weekend I am not the only one racing. In Kentucky, Abbe and Katie will be running I have a number of friends racing Big Sur… Bojana, Eissa, Elyssa, Shawna (who I met on the bus to Boston), Robert. I’m also through with wishing my all friends ‘Good Luck’ which is odd since I’m irish. You don’t need any luck, you already have what it takes. Instead, to all of you I say Godspeed! Go find your pain. 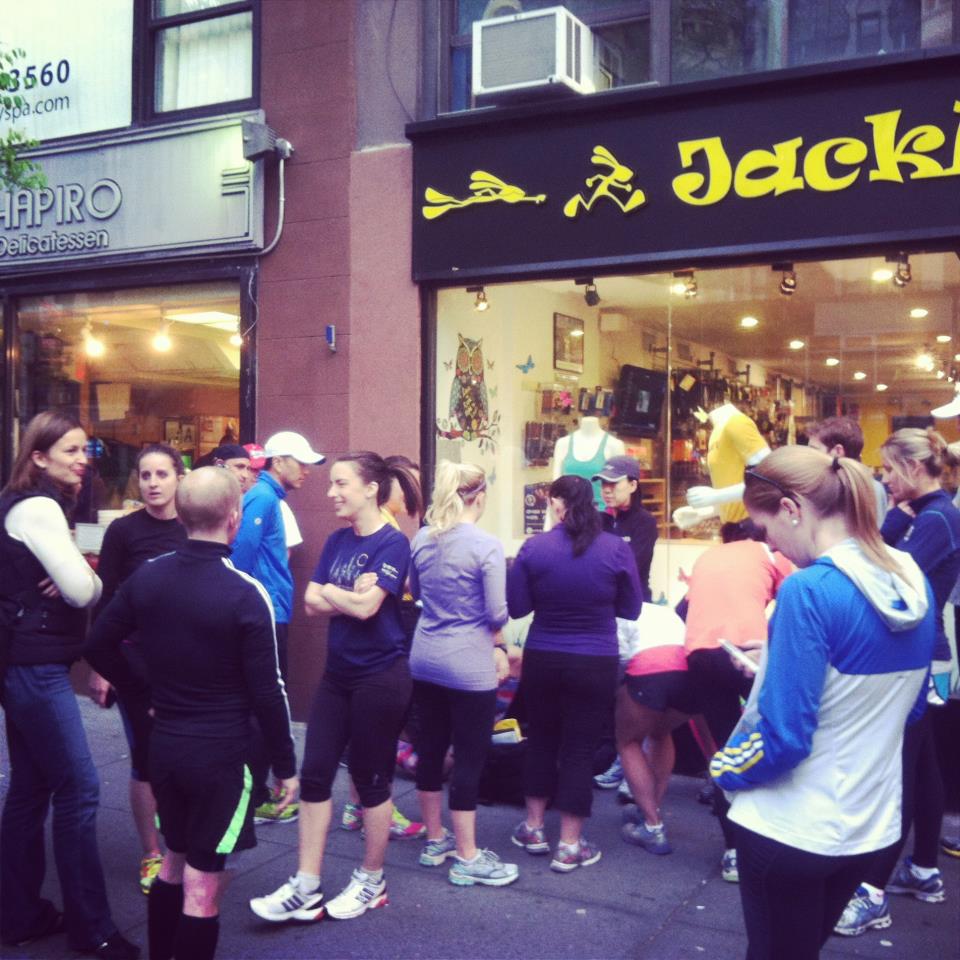 Thanks for everyone who came out to the run last night! I look forward to many more runs with you. 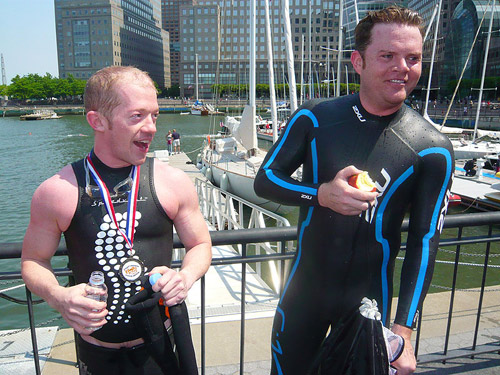 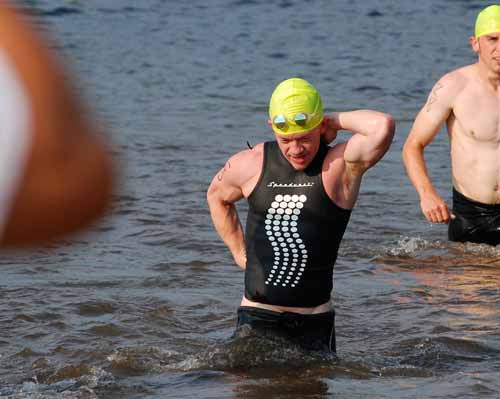 I don’t often use pain relievers, but I was recently offered a chance to test a product called MuscleCare. It came in 2 forms, one was your typical gel and the other (my personal favorite) was a roll-on!

So… first things first, I needed to put myself in some serious pain.

I geared up and hit the Great Lawn in Central Park. Coach S. had assigned me some sprint intervals that day which seemed perfect to generate some muscle pain. The workout consisted of 5 intervals; 3 minutes at a 6 minute pace followed immediately by 5 minutes at an 8 minute pace. They were pretty brutal, but I love these kinds of drills. My total mileage was around 6 miles and by the time I had finished I was on fire.

I slowly slogged home, anxious to have dinner. My legs were toast.

Back home, I grabbed a shower then applied the roll-on MuscleCare to my quads and calves. I was really impressed with how quickly the roll-on took to apply and I didn’t have any goop on my hands like when using Tiger Balm. Also, Tiger Balm smells like Vicks Vaporub and makes me nauseous every time I smell it, like in the start corrals of a race.

As I started cooking dinner my legs had this tingly coolness set in. I wondered if I was going to collapse as my muscles went numb, dinner still cooking and me unable to reach up to it. This did not happen. Instead the MuscleCare really did work at relaxing my muscles. I’m not going to go as far as to say ALL of my self induced muscle pain was gone, but my legs felt great.

The following day my legs were not nearly as trashed as they normally would be and that in itself is worth it for me.

“MuscleCare is an all natural topical pain reliever (containing no parabens, wax, petroleum or colouring agent), which comes in a 3 oz roll-on and an ointment.
The active ingredient in MuscleCare is Magnesium, which elicits the relaxation of arterial smooth muscle and aids in enabling skeletal muscle to relax.

MuscleCare products are available at DUANEreade retail stores and online at www.musclecare.net, www.amazon.com, and www.cvs.com.”

Due to some documents that have recently been revealed, it seems that my claim of only being a runner for the last 3 years to be false. The following transcript was published in 1988, when I was only 11 and paints a dramatic account of my running abilities.

Hi, my name is Chris and I am the world’s fastest runner. I can run up to light speed! Not only can I run up to light speed, but I can fire lightening bolts out of my fists! Let’s go back to 1982. It was a Saturday night and I was going to sleep. Then, I heard someone calling my name and I ran over to see who or what he wanted. “Hi, there” he said. “What do you want?” “Nothing, I just want to give you something” “What?” “Super Powers!” “Wow” “You will be able to stop robbers and burglars.” I woke up, it was a dream. Woooshh! “Wow! I can get out of bed super fast! That dream must have been real!” And so that’s how I got my super powers.

I was probably looking like this when I wrote that and no, Adidas wasn’t sponsoring me yet. 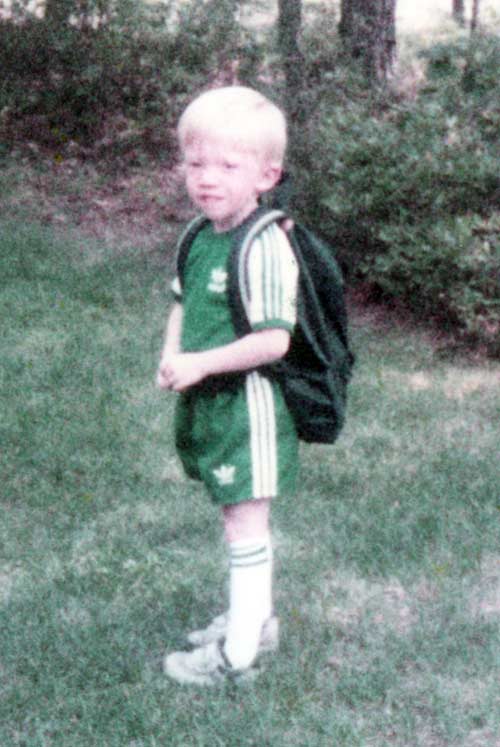 By now most people have heard of and hopefully come to terms with the fact that I eat ‘Race burrito’ during any distance race over a Half Mary. I started this nutrition tactic during the Knickerbocker 60K last year when I was freaking out over how I would survive the race. It worked that day and a new way of fueling was born for me.

A lot of people have asked how they are made and what goes into them so I though I would do some explaining.

SIDENOTE: I will make you ‘Race Burritos’ if you give me a few days notice before a race. 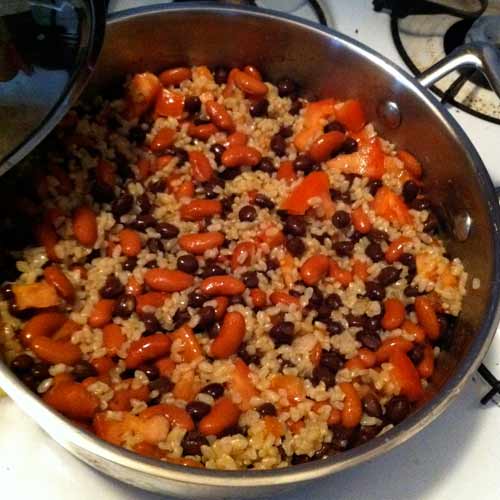 In a large (deep) sauce pan cook brown rice. It’s important that the rice is over cooked rather than under cooked. (Crunchy food during a run just ain’t cool)
While the rice is cooking, drain and rinse the beans and dice the tomato. Add them to the rice mix once it is cooked thoroughly.

On low heat, keep stirring the rice and bean mixture. Add a hearty amount of sea salt and go light on the cumin. Do not over do it (regarding the cumin) otherwise it will affect you on the course. 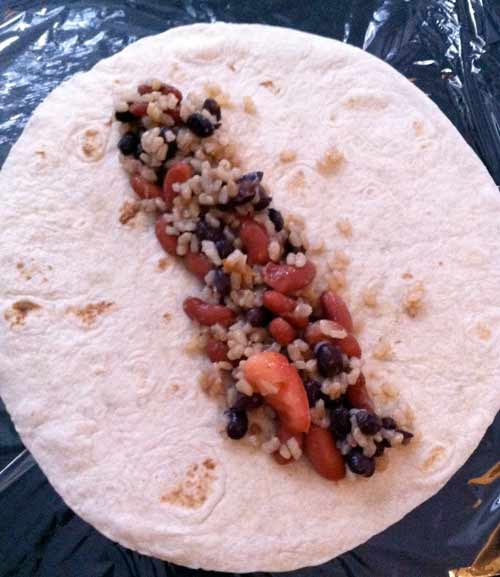 Once the mix has cooled a bit (and there is minimal moisture) add very thin strips to the tortillas. Try and get an even spread of beans and rice. 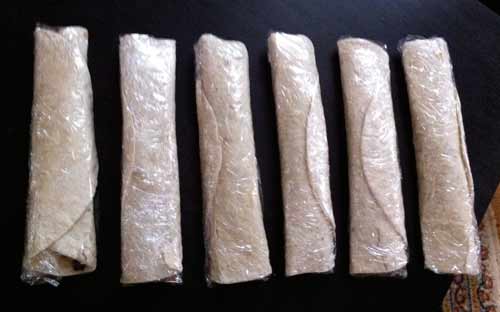 Roll them very tight and moisten the outside flap with warm water to seal it. Then, wrap it in cellophane by folding the left and right ‘open’ sides of the burrito first, then roll the rest around it. This helps to keep it together and to make it easier to open while running.

Refrigerate, then on race day tape them to your bike, stuff ’em up your shirt or in your arm warmers.

SIDENOTE: I normally eat one the day before a race so my body adapts to it.