I am going to start doing a series of posts on my experiences here in New York City and this is numero one. Dig it.

One of the things that makes New York great is the ability to do anything. Do you like to sew? There are classes and talks on sewing. Maybe you like to collect butterflies. Yes, there is a butterfly collector meet-up.

When my friend Elizabeth asked if I wanted to go see Chrissie Wellington speak this week I thought, “Oh man, Triathlon Nerd Meet-up.” “Hell yes I want to go!” For those of you who have no idea who Chrissie Wellington is, I’m going to slap you. Seriously though, the gal won the Ironman World Championships 4 times.

What would I wear? A running outfit? Perhaps a Rev 3 visor? My wetsuit minus the goggles and pee? (people were actually wearing these things by the way.)

Abbe invited me to be her guest at a wine tasting downtown that started at 5:30. Perfect!

I arrived at the very dark and sleek venue and met some of her colleagues before getting started on my Vouvray wine experience. We started with the drier wines, moving down the spectrum to some sweeter ones One of them literally tasted like you were biting into a crisp green apple. Amazing.

All of this was happening while we were being served some spectacular hors d’oeuvres. My favorite were the lamb tacos, which were no taco at all mind you. It was more like spicy lamb wrapped in puff pastry heaven.

At 6:30 I left the gals and headed uptown to see Chrissie. I blasted north on the Subway, arriving promptly at 7. Timing is everything.

As I was entering I saw my friend Josh! Josh is a speedy runner (Homeslice just ran a 2:38 in the Dirty Jersey Marathon coming in 3rd overall) who runs for the Front Runners team. Shorty after that I found Elizabeth and we took our seats.

John Korff, the man who’s company puts on the NYC Tri and Ironman NY was our MC. 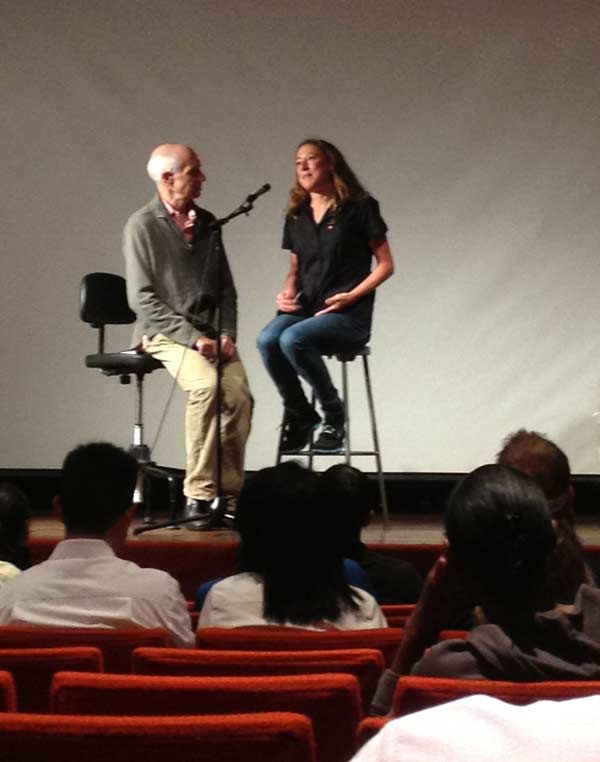 Chrissie was really fun to listen to. She gave a lot of great pieces of advice, most of which I have heard over the years from others, including my Coach. What was so captivating about her though was how she used Ironman as a vehicle to a larger world stage. Now that she is known for her athletic achievements she can pick and choose her charities and foundations, raising awareness and money.

The other thing that resonated was, she said she always wanted to run a race and give it all physically and emotionally. It resonated because I think I actually did that for the first time a few weeks ago at the Kentucky Derby Marathon.

Everyone stuck around to get their books signed, but I departed, mainly because the line was insane and I was starving!

Walking home in the cool spring air after a talk like that made me want to run.

Where else can you go from a fancy wine tasting to an Ironman talk?! I love you New York!