Sitting in a pub 1 year ago with a few members of the Runner Army, it was suggested (because Maura is from Galway, Ireland) that we run the Connemarathon. It’s amazing what you can do, a simple dream or conversation, becoming your very real reality.

I met Claire on the Deuce, or 42nd Street if you prefer, and we hopped a cab to JFK. It was a beautiful day for a cab ride. Claire and I shared our insights on whether we were going to run the race in 3 days time. She has a stress fracture on her middle toe and well, my knee has bursitis. Both of us hadn’t done any training in probably 6 weeks, but more on that later.

We found Abbe Lew at yes, you guessed it, a bar. We saddled up beside her and had a few pints while we waited for our host, the Queen of Galway Bay herself, Maura to arrive. 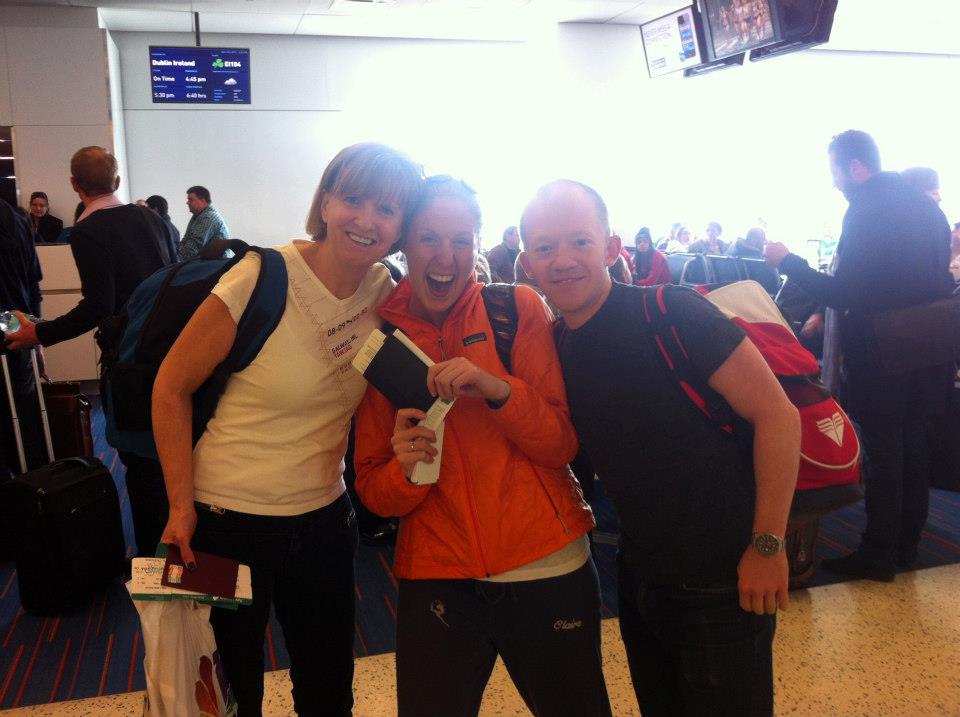 So… we were pretty banged up when we got on the plane. I had never been on a transatlantic flight before so my plan was to use booze as a sleep aid. It worked. It was a 6PM flight so we arrived in Dublin on the following day at 5AM, time traveling into the future. Pretty cool aside from that fact that we would be a mess until we got to sleep that night.

We were hangin tough in the airport until the whole army arrived. Role Call: Abbe, Claire, Maura, Bojana (aka BoJo), Elyssa, Lisa, and Kristina. After renting a van, we took off heading westward! The only time it rained (the entire trip) was right as we were leaving the airport.

Once we were back on the highway everyone pretty much passed out aside from our driver, Maura. I tried really hard to be tough, fighting the urge to sleep and keeping her company, but soon I too was knocked out.

Arriving in Galway where Maura grew up, we headed to her family’s seafood business and met one of her brothers. Then, we went to her place, saying hi to her mother who is quite cool and very funny in an irish witty way. We had some time to kill so we went for a ‘Walk on the Prom.’ The promenade is a walkway winding around all of Galway Bay and is truly a sight. Across the bay is County Clare, very majestic with its hills. We also stopped in to have lunch at a local spot in which a few of us had our first of many Guinness tastings. Such a treat. 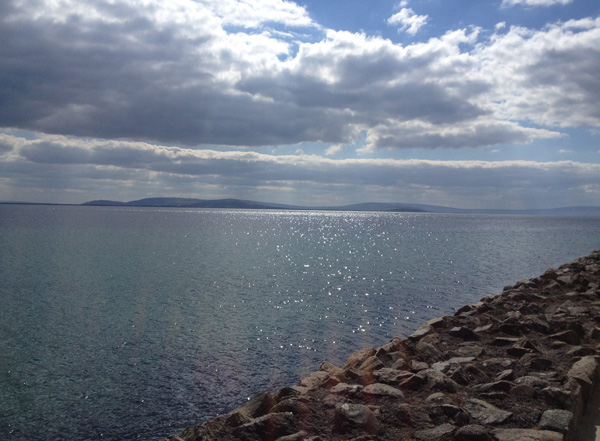 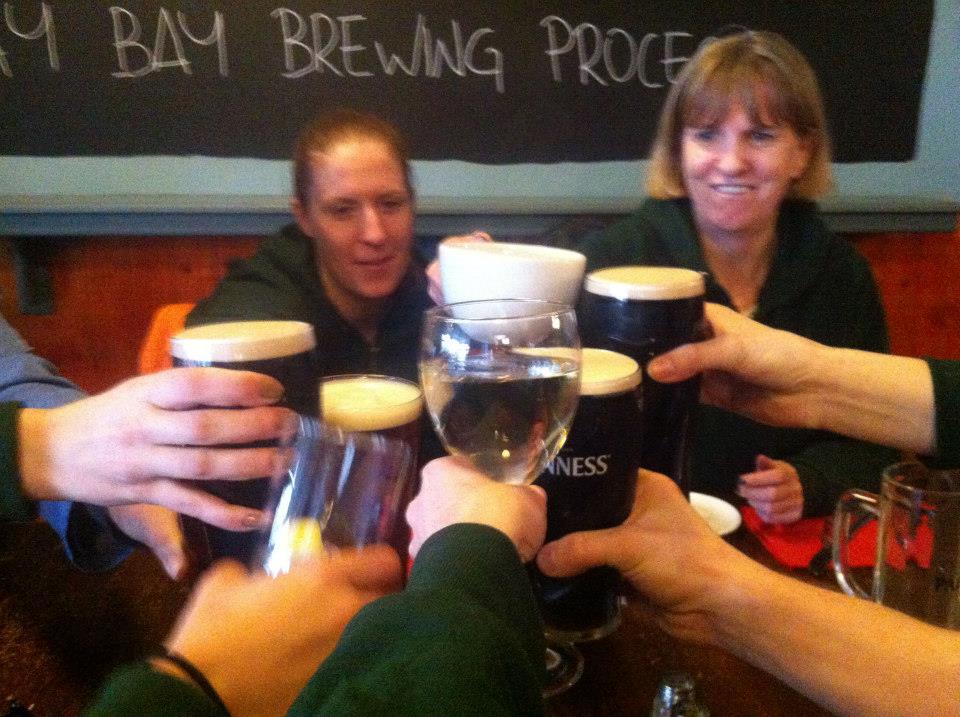 One of Maura’s very generous friends, Trays, let all of us stay in her house for the duration of the trip! So very sweet of her! After we cleaned up from our long day(s) of travel we hit the town! We had reservations at Ard Bia, a local spot in a cute country home style setting. My meal was absolutely amazing. Even here in New York I would be hard pressed to find something as delicious this. I had monkfish (the special) and seasoned vegetables. I also ate the leftover steaks of both Claire and Maura. My knee was craving food I guess, like some sick monster or vampire trying to regenerate.

Later that night Claire helped me with my math in noting that all of us had indeed been awake for 36 hours.

“Sleeping is easy, waking up is the hard part.” Isn’t that true after a crazy 36 hours of travel? I felt so great on day 2 after a full nights sleep and after eating enough dinner for 3. 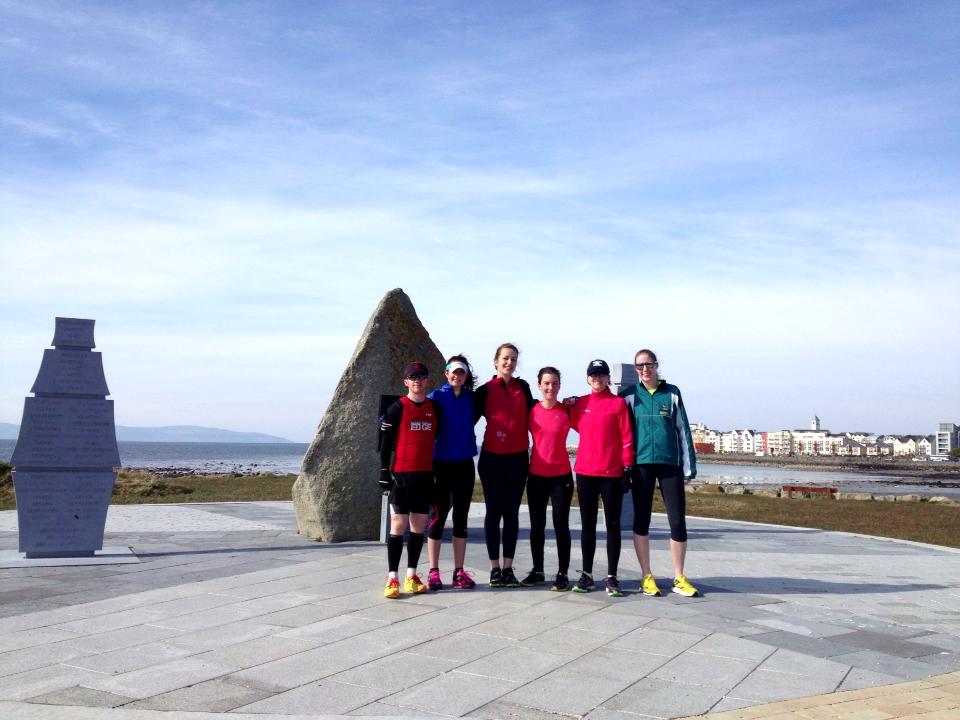 We started our day with a morning shake out run along the Prom. It was a beautiful sunny day! My knee was only slightly wonky and I even did a speed drill to test her out. Systems were looking good.

Just to put you in my head… this race had been planned for a year. It takes place in one of the most beautiful and remote places in Ireland and has 3,000 entrants. I really wanted to run, but only if my knee was in good shape. With every passing day it got better and better. I also hadn’t run since February, so with no training my mind was a big ball of stress.

After the run we headed out (with Maura’s youngest brother Chris as our tour guide) to Connemara. We wanted to scout out parts of the course and just get a taste of what we were up against.

Packed into the van and very excited, we as me made our way past the last small village we entered some of the most mesmerizing scenery I have ever seen. Vast stretches of rock strewn fields met with tall majestic rock mountains cutting across the sky. Every now and again there would be 3 to 5 small farm houses at the base. Oscar Wilde dubbed it as ‘a savage beauty.’ Oh, and there were sheep EVERYWHERE, even in the road hanging out being sheepish. 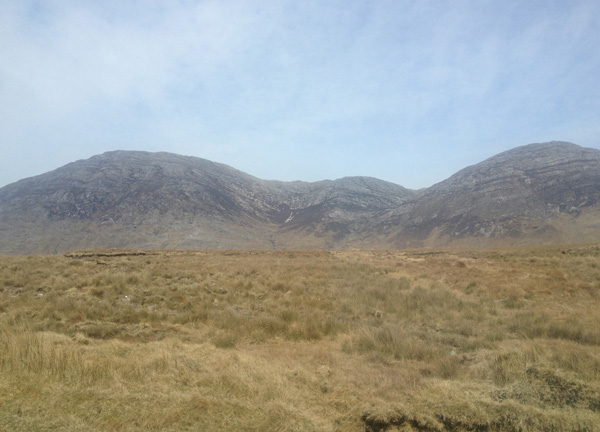 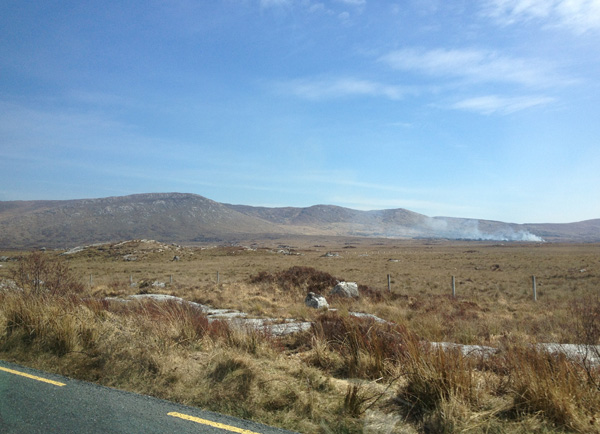 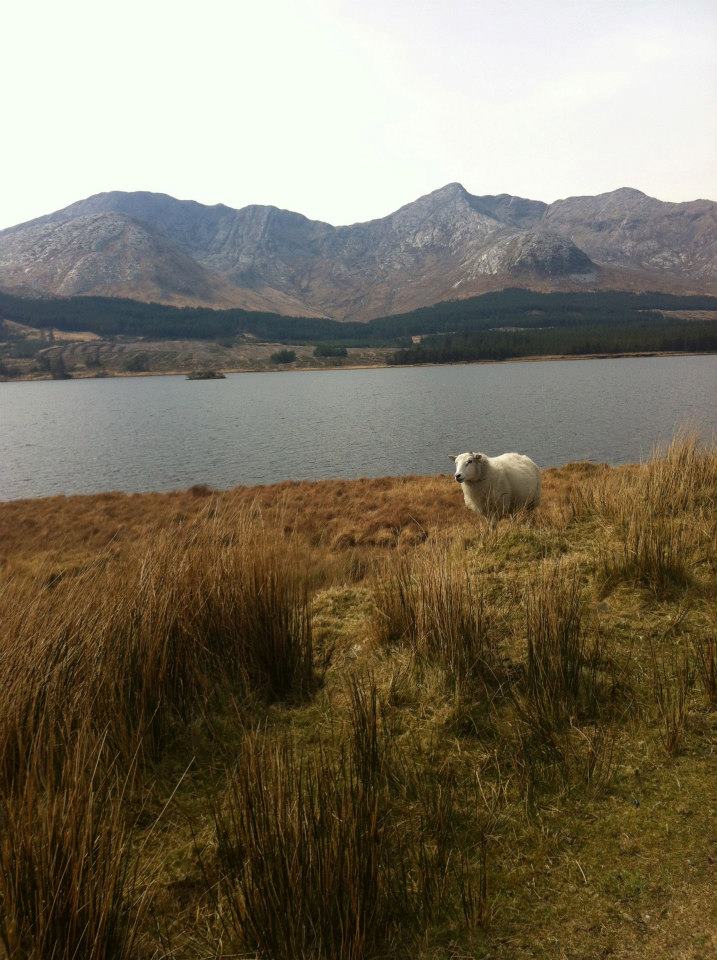 Did I mention it was sunny?

On the way to lunch we ended up driving a bit of the Ultra course which upset Claire. I mean, the course did look very lovely from our perspective inside a moving van.

We stopped at Kylemore Abbey for lunch and to see the castle grounds. Briefly, its story goes something like this… in the 1850’s a couple honeymooned there. Years later the man inherited a great deal of money, returned and purchased 15,000 acres to build his wife a house modeled after a castle. It even has a church and lavish gardens. Its quite amazing. A few years after it was built his wife and daughter were struck ill and died. Since then it has passed hands a number of times. Now, the Benedictine Monks preside over the estate. 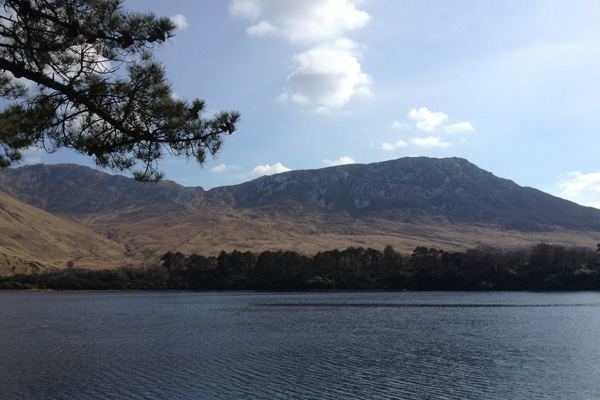 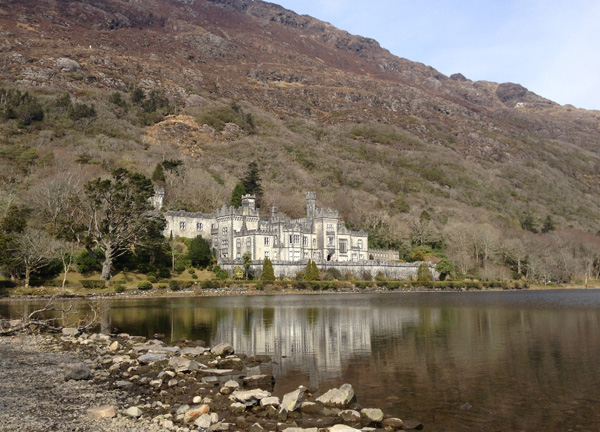 After basking in it’s beauty, we departed to bib pick-up, an hour or more away back in Galway.

Pick-up was at Elvery Sports, a local shop, and pretty painless. The single most important decision I made there was to purchase a running jacket. It was a very lightweight windbreaker, ‘wind breaking’ being the key component. 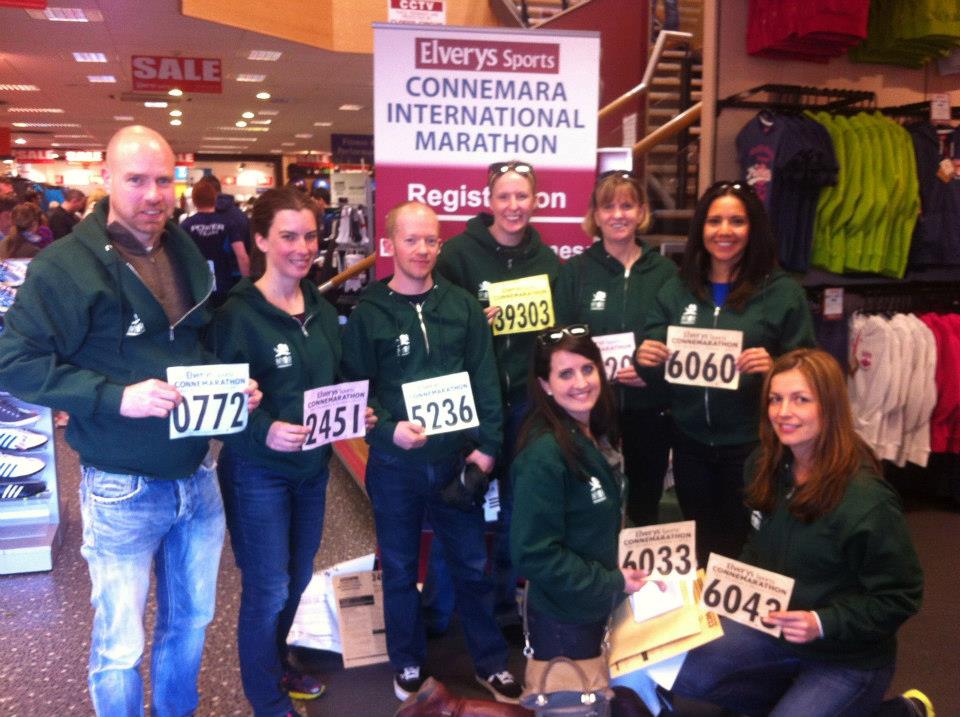 For our pre race dinner we decided to cook at the house and not risk possible food errors. Abs and BoJo made pasta with basil and tomato and a side salad, perfectly delicious.

After dinner Maura, Chris, and Elyssa went out to a local pub but the rest of us were pretty exhausted AND nerve wrecked knowing what battle lie ahead on the fields of Connemara. We had a few beers then went to bed at 11PM.

« That time I got injured.
Our Boston Marathon »