I suppose it was during the afterparty of the NYC Half Marathon that it happened. There were beers involved. Friends agreed, I should run Boston on my 10th year of running. Even better, I will turn 40 years old in 2018, so it’s a dual milestone.

The problem – it was March and I had no qualifying time to register with. I’m signed up for the Chicago Marathon, but Boston will surely close by then. The solution – run a spring marathon with minimal training.

It was right around that time that Mike from the ‘Dad Posse’ emailed asking if we would be running the NJ Half Marathon this year, kind of a tradition between all of us. A light bulb went off in my head, ‘Bingo!’

I had 6 weeks until the NJ Marathon, and so I built a rather aggressive training plan that would jack my distance up fast. Game on.

On a positive side (wait training is positive right?) Due to my age I gain 5 minutes for my BQ. Instead of having to run faster than a 3:10, the time was now 3:15. Getting older can be fun!

Abbe, Jenn and I did a quick shakeout run on Saturday before Jim was to pick me up. I ran 2 miles and they continued on while I had a serious case of FoMO.

Jim and I were on the road by 12:30pm heading south to Mike’s place in Little Silver. We arrived at 2pm with no trouble.

Mike and I went to get our bibs while Jim went to visit his Grandma. After bibs we hit up Tommy’s Tavern for some beer and apps.

Dinner was at at Brothers Italian, a Red Bank staple. We ate here in 2011 before the race as well. Mike and I choose shells with meat sauce while Jim had meat lasagna with Cabernet. Jim was in a fancy mood.

Up at 5:45am with coffee in hand 5 minutes later. We had loads of time. Mike’s wife Kara was going to drive us to the start at 7, which meant we would be n our corrals as 7:15. Perfecto. I ate one banana and took one to go.

As we were leaving I stepped outside into the overcast 50 degree weather. I held my arms out and looked up, Shawshank Redemption style, and said to the guys “The gods are with us today!” It was (almost) perfect running conditions.

After a slow warm up we parted ways to our respective corrals. Along the way I spotted my pal Ali chillin in the her corral. Photo op! 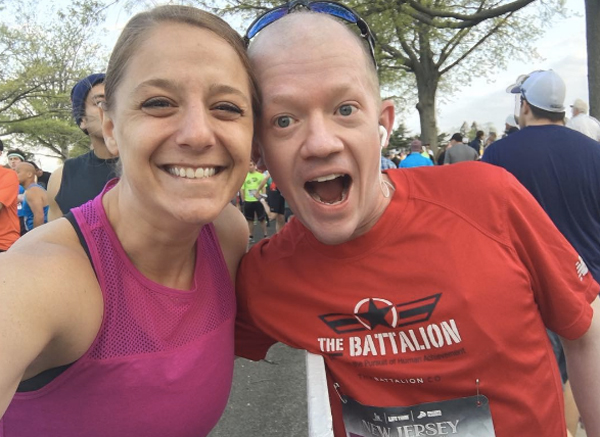 The clouds were moving fast as the sun shot out blindingly from a few open holes. It felt epic and I was definitely ready for Battle Stations.

The horn sounded and we took off. It felt great to just run, tapering was murder on me this go around.

The first few miles ticked off and I was the hitting 6:30-6:40 range. I felt fluid and this pace felt slow. Being notorious for banking time, I just went with it and enjoyed the run.

As we exited the neighborhoods and made our way into the downtown stretch of Long Branch, I knew that my friend Kate from GCR would be at mile post 9.5. This was a helpful driving force in my run. They had a solid team presence and gave me a great shout out, thanks GCR!

Up ahead I thought I recognized a female runner. ‘Is that my pal Allison (also from GCR)? Is that speedy Amy running next to her?’ Perhaps… perhaps.

As I approach I realized it was indeed them! Hello friends! I yelled, “Slow it down people!” We chatted for a hot second. They were running the Half and were soon to be finished while I, well, I had a few more miles to go. They bid me farewell and I proceeded into the darkness. The trouble with Half Marathon and Marathon dual races , if you are doing the marathon, is that you see the halfers head to the finish. Meanwhile, you have FoMO because you still have to double that distance. It’s such a bummer.

This may have been the first time in my history of marathons that I hit a truly bad place this early on. Mile 11 passed and the sun came out, increasing the temperature. We were on a straightaway and the turnaround was at mile 19, 8 miles down the road. That is a huge mindfuck! 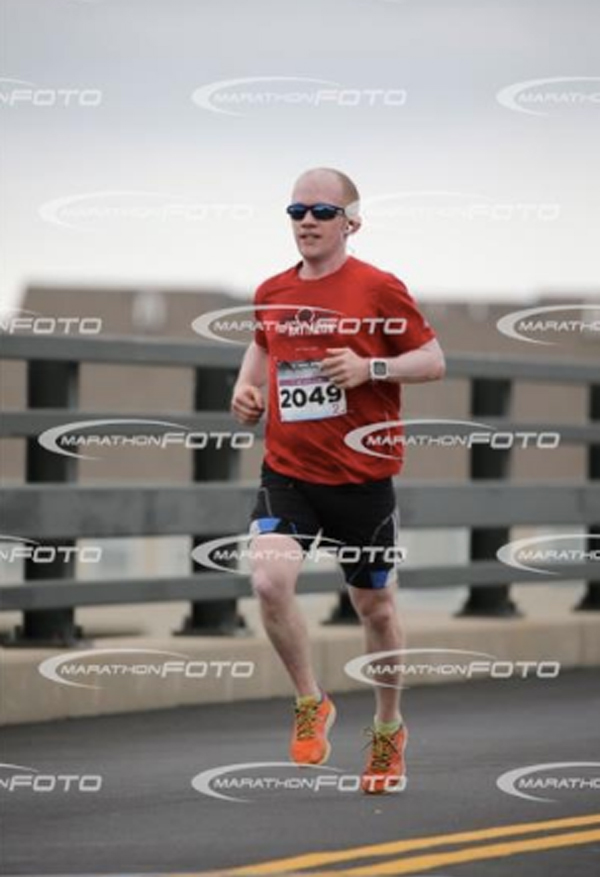 I think the course Gatorade messed up my stomach as well because I didn’t feel too hot. I did a systems check on my body and everything was good aside from my stomach… and my mind. Major trouble.

They say a marathon is 10% fitness and 90% mental. Since my early days I have agreed with this statement and now my own mind and willpower was coming to test it.  ‘I should quit before I get too far down the course. Why did I think this was fun? Fuck the Sun God, it is so hot right now.” It was bad, like real bad. I thought my pace had slowed to 10 minute miles, but I was still hovering at a 7 minute pace.

‘As long as I am moving forward, I am winning.’

The wind was coming from the Northeast and at mile 13 we ran inland around this dumb lake, only to add on 1/2 a mile. I felt the wind on the return. It cooled my core down and I mentally calmed my breathing down. I pulled my form back together. My stomach was still a mess, but the rest of me was improving. At the next few aid stations I made an effort to slam water and only water, to flush my system.

As miles 15-17 passed my pace suffered to a 7:05 range. Keep in mind, I was putting unnecessary pressure on myself at this point. I needed to run a 3:13 to hit my goal and I was running a sub3 race up until now, because I am competitive and maybe, just maybe, stubborn.

At mile 19 the 3:00 hour pacers past me. I got slightly mad because the pacers were so chipper and encouraging to all of us. “C’mon guy, lookin’ great, keep it up!” I was very far from looking great. Look at the next photo, I look like shit with my frowny face. 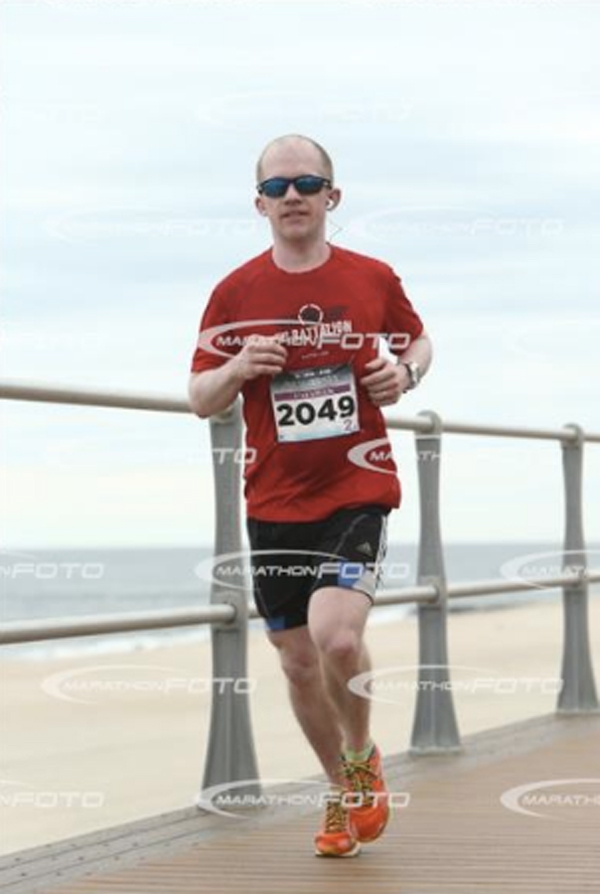 We popped onto the boardwalk, now in Asbury Park, and had a very cold headwind. It may have slowed us, but I needed the cool air.

After a few Ironmans and Marathons I have learned that sometimes when I am at my worst, I do my best. ‘Never die.’

I wasn’t pushing my pace any faster, but my mind and body were back in sync as I ticking off the miles. I was hitting 7:30s by now, but was steadily moving, even through aid stations.

Speaking of which, at the mile 22 station Mike’s kids Kevin and Kelly were volunteering! Thanks for the water!

I soon saw Kate again who gave me a high five. Next I heard this angelic voice that couldn’t have been more timely say, “Go Chris Baker!” It was Abbe and wow what a sight for sore eyes she was. I stopped and kissed her as she yelled, “Keep going!” My battle wasn’t quite over.

By now the 3:05 pacers had passed. I had 3 miles to go and was pretty sure I could make my goal if I just held it together. 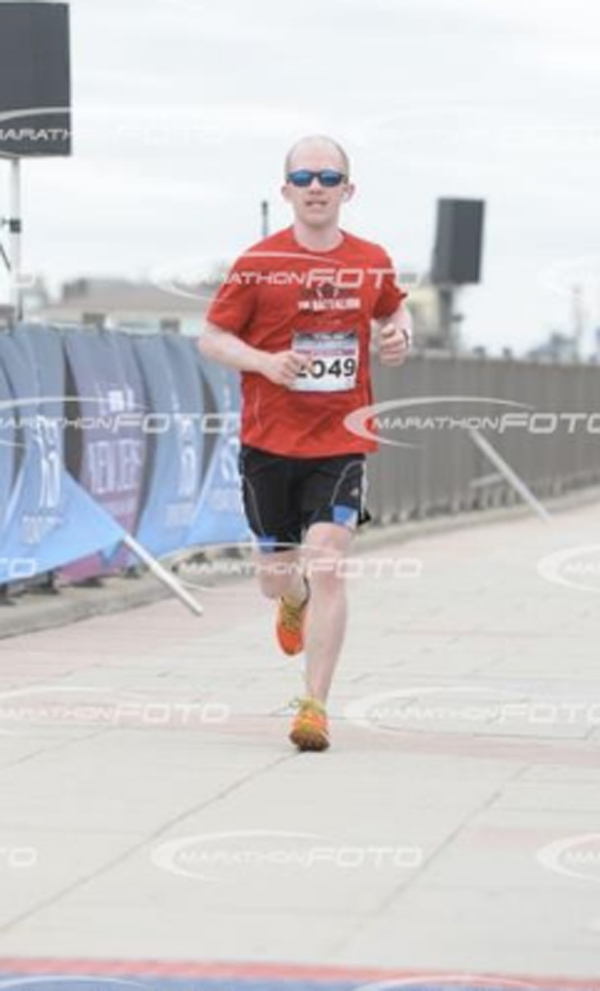 I was now on the boardwalk making my way to the finish. The course was very familiar now, I have run this course 4 times I think? I plugged away at the distance, my quads in particular were on fire. As I approached the finish I had many cheers from strangers, which was really awesome. Then, my pal Ali who had finished the half was on the sidelines yelling!

Driving my legs down the finish line I had one last motivational push. A handful of athletes that I coached to their first Ironman last year were on the sidelines waiting for me to finish. “Baker! Go Baker Go!”  I waved and punched it! Thanks Samurai for some helpful cheering.

3:05:38 was my final time which meant I had BQ’d with 7 or 8 minutes to spare. Mission complete. I have still not emotionally processed what has happened. 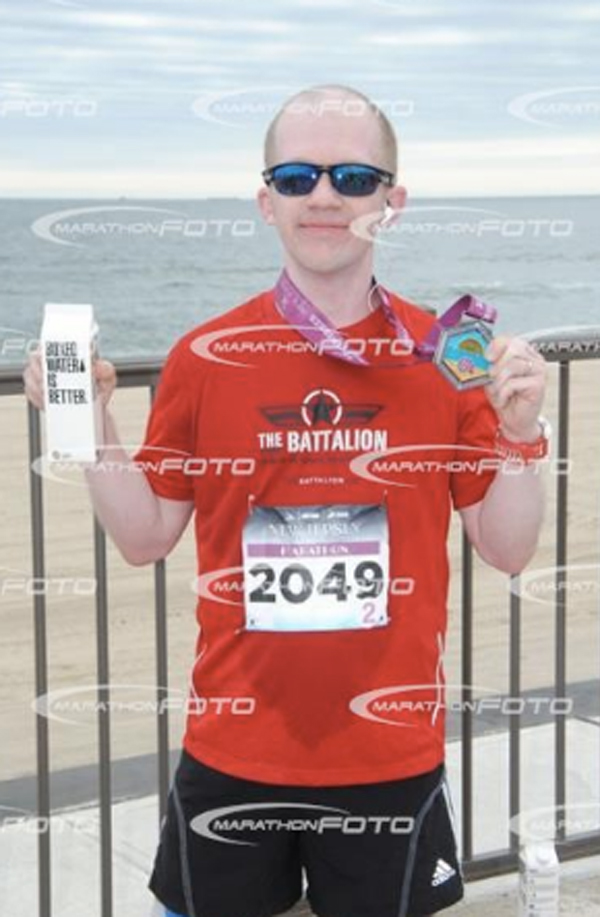 Water in a milk carton is the jam. The photographer actually asked me to put the milk carton down… nope.

After grabbing my hardware I saw Jim and Mike at Rooney’s drinking beer. Jim was 3.5 beers in, which is a new handicap system we are working out. They gave me a huge cheer as I found my way to them.

I had a beer as we waited for Abbe to come off the battle field. Once she arrived she told us the story of a guy who tossed his phone to her at mile 22 and said “Please take this, it’s heavy. I’ll call you at the finish.” Sure enough he did. His name was Carlos and he runs for North Brooklyn as does my pal Evan who he knows. Small world! You know I love making friends.

This wasn’t an easy race. Training is everything and although I trained for 6 weeks, it wasn’t enough for it to be a walk in the park. I put everything I had on the course on that day at that time and I was no more. Sometimes when you want something really bad you throw it all out there. Pain is an idea your mind sells to you. Pain is temporary while glory is forever.