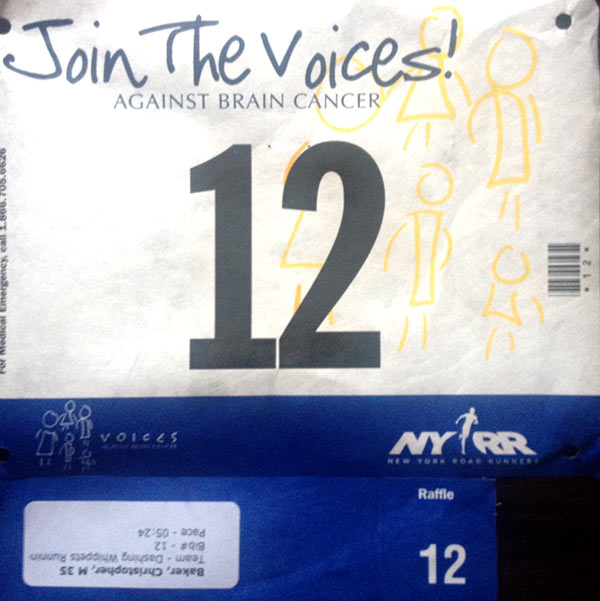 This weekend was chock full of races! The NY 60K, Philly Marathon, Brooklyn Marathon, Ironman Arizona and the wee bitty 5 mile race I did, Join the Voices.

On Saturday I really dug into New York City. I started the day with ice skating around Wollman Rink (something I do almost every weekend in the winter months). It was a blast, especially due to the warm weather we were having.

After skating I walked home up the east side of the Park watching for Juan who was well underway in his 60K run. I didnt see him, so popped into the apartment to change into running gear and drop off my skates. Back on the scene, running north, I got a cheer from Ali! I pulled over and cheered everyone on along side her. We saw a few friends and then finally Juan came by. I ran with him for a bit chit chatting about whatever. I was trying to take his mind of the pain. I left him at Engineers Gate and hung out with Elizabeth cheering some more.

I grabbed my race bib for Sunday’s race and then wandered around the ol MET. I try to pop in there once every 2 weeks or so you know, because, it’s only priceless artifacts from around the world. I was playing a game (with only me, no other patrons participated) called ‘Find the Oldest Thing.’ The Egyptians always win. It blows my mind looking at pristine specimens of writing and jewelry created 4,000 years ago!

I later met up w Jeff, Alison and Cat for drinks. I convinced them to go to San Mateo for dinner which was maybe the highlight of my weekend. Their pizza is pretty spot on.

Waking up to race on a grey fall day can be difficult, but knowing that the temperature was in the 50’s got me motivated.

A lil Cafe Bustelo and then a light jog over to the start which was by Tavern. I ‘ran’ into Jess on the way, she too was warming up. I also ran by Claire who yelled out a friendly, “Hey Bakes!”

I jumped in my corral and noticed everyone being shy and staying in the back. Not feeling particularly social as my nerves were a bit edgy, I walked right up to the start mat and hung out. Soon, others followed.

The gun went off and we were all flying down the lower loop. I once again had no watch and was relying on how I felt. At this moment, I felt good so I just hung with the leaders (for a hot second). I had absolutely no pain in my knee even at a speedy rate and so I kept pushing it.

We hit mile 1 around 5:45 and I kind of laughed out loud thinking to myself, “Ha, this pace isn’t going to last.” And it didn’t.

I saw Beth cheering from 72nd Street and yelled out a “Hi!” to her before heading up Cat Hill. It was here that my pace slowed and I thought I was going to have a heart attack. I haven’t run a short distance race in awhile so my internal systems were on overdrive.

I hit mile 2 at a 6:10 pace. By now we had really thinned out and I just tried to hold it together.

I noticed someone coming up on my right. It was a speedy female who had a cyclist tracking her. She happened to be the second place woman and was hell-o-fast. We paced each other for miles 3-4 before she took off. It was very helpful having her around.

The West Side Rollers took a lot out of me. They never end!

I came through the finish at 30:31, ten seconds from a PR. I ended up getting a 3rd Place Age Group Award! Sweet!

As soon as I was 10 feet across the finish my friend Antonio came blasting up! He had been right behind me chasing me the whole time! We caught up on life and then did a cool down jog up the east side towards our neighborhoods. I say Beth again and she gave me a high five! We also ran by a volunteer who yelled to us, “Mile 2 coming up guys, looking good!” We had a bit of a laugh at that.

It was a great day for a race and I am happy to say that there was, and is still, no knee pain. I am officially back in business.

On a separate note there are a few congratulations in order.

– Big ups to Juan (already an Ironman) who became an Ultramarathoner!

– My friend Doug (who I casually coach) knocked 25 minutes off his marathon time in Philly with a 3:26! Nice!

– My former coach, friend and teammate Sonja rocked a 9:35 at Ironman Arizona earning her a 1st AG Award and her annual ticket to Kona! Awesome!