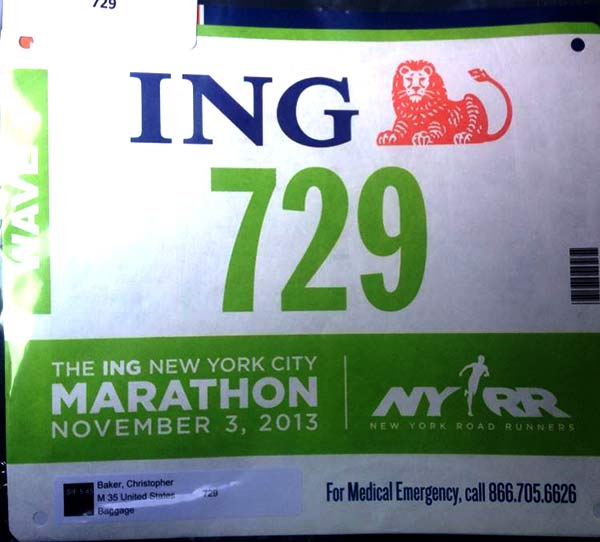 The 2013 New York City Marathon would be my 11th marathon and my fourth on this course.

Saturday morning I went for a shakeout run with my brother Jeff. He was running his first marathon and I had been coaching him through the training season. We chatted strategy,mostly ‘exit strategy’ on getting back to the east side once the finish line was crossed.

That night we had a big family dinner. Jeff and Ali, Abbe’s parents, Uncle John, Aunt Margie, cousins Gillian and Cat and finally Abbe and I.

Normally, I eat some kind of pasta with shrimp in it like Shrimp Scampi, for example. Tonight, the black ink linguine with mussels and clams looked tasty so for the first time in years I ate something different before a big race. THIS IS A CRUCIAL CLUE TO FUTURE EVENTS.

Abbe, Aunt Margie (who was volunteering at aid station 18 and sleeping over on the fold out) and I were all in bed by 10.

All of us were up having some Cafe Bustelo by 5:30AM. I felt great, albeit very hungry. We made oatmeal to take with us to eat on the ferry since we have 4 hours until start time.

Abs and I met Ali on our corner and we busted down Park Avenue in a cab en route to pick up Jeff. Once we had him we flew down the FDR to the Staten Island Ferry to meet with the rest of the Army.

We found Bethaney, TJ and Mary Craig before we got on the 7AM ferry. Then, miraculously as we sat in the middle bar area of the ferry other friends started finding us! Bojana, Lisa, Elyssa, Maura and Una just appeared out of thin air! It was so much fun rolling deep with so many friends. 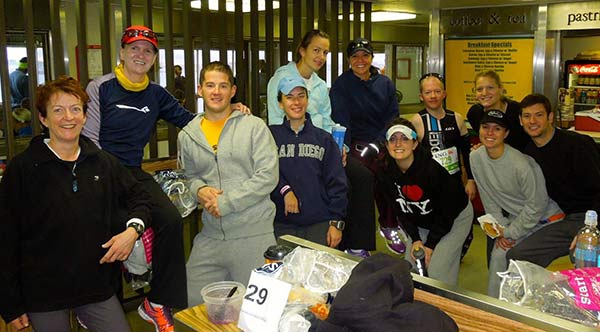 I ate my oatmeal and was very relaxed and excited. I had set no expectations and wasn’t even running with a watch. The name of the game was fun.

The buses after the ferry took twice as long due to security searches upon departure. It’s all a necessary precaution now based on current events I suppose.

Since we were running a bit behind I quickly said goodbye to everyone then jogged up to Camp Green. I found the Local Competitive area and was very impressed. We were sectioned off from everyone with our own tents and port-o-johns.

While waiting I bumped into David, Maura, Josh and Kelsey. All of us hung out and then made our way to the front of the Green Start to wait until gun time. 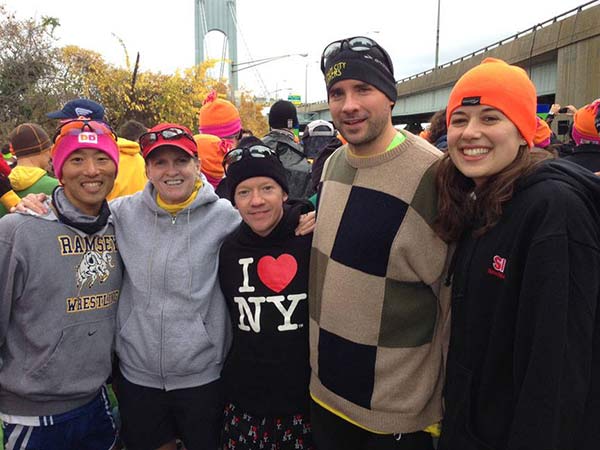 I sat and reminisced a bit being led out with my fast friends to the front of the line. Sitting there, looking around and seeing other friends of mine on the upper deck warming up and waving. It wasn’t too long ago I sat a few corrals back; my first race, all alone and nervous at what to expect. I am very honored to have come to know so many wonderfully talented athletes who I now call dear friends.
This year while waiting the 30 minutes or so to start, I decided to pee in the bushes. Many a man were doing it, and there were actually lines to get to a bush or tree.

We wished each other well, then the canon sounded and the games began.

As we began to run, I felt good, great actually. The minute we started ascending the bridge most runners flanked to the right as there was a very sharp and biting wind coming from our left. I did also not get peed on nor did I see any pee from above. (We were on the lower level.)

Barreling down the span I began to get excited about what lie in store. Fourth Avenue Brooklyn is one of my favorite parts of the course. It’s a straight shot for 8 miles covered in crowds who are practically out on the course with you high fiving and being supportive. Brooklyn also has some great bands, and I happened to see Erin and her band at Mile 4 which was a nice surprise! The other thing that’s nice about this part is that it’s the first 8 miles so you feel great! 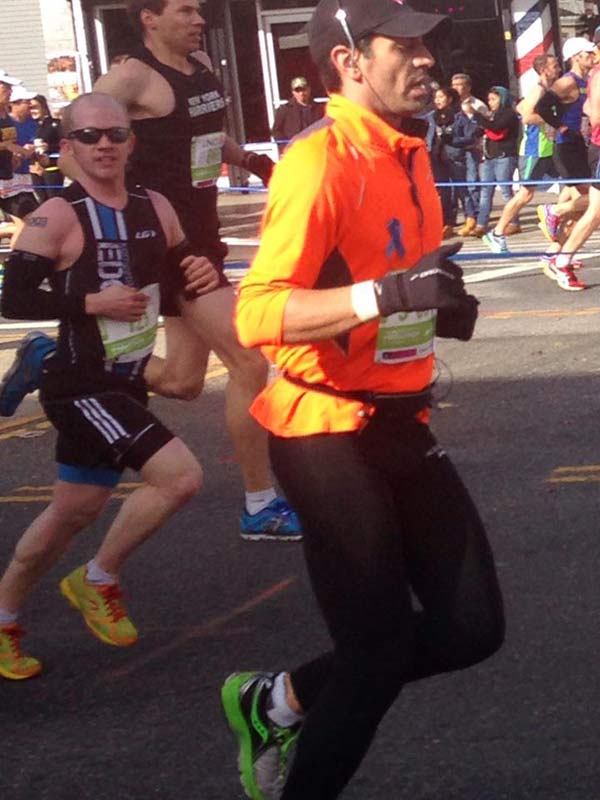 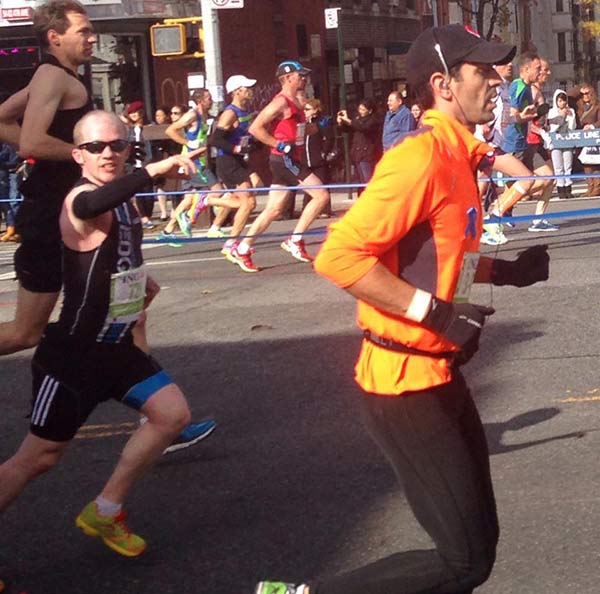 I happen to see Juan hanging on the sidelines and got a few shots of me waving!

It was somewhere around here I ran into Joe’s (Cardiac Crusher) brother Mike! We were kicking the same pace and hung out for a second. It was at this point I realized I may not have been in the best running state, as I tried to maintain not only conversation but pace and I was slipping. My legs felt very heavy and so I left Mike so he could push ahead. SIDENOTE: Mike would go to run a 2:57 for his marathon debut! Congrats! 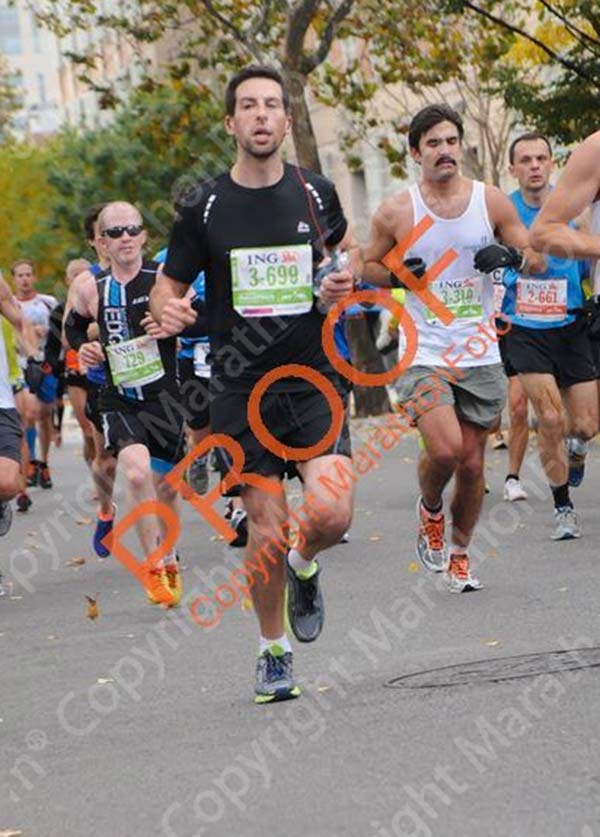 At this point I had been pushing a 6:35 pace and would unknowingly hold it for the rest of the race. Unfortunately, I was starting to really struggle with my energy. My knee and legs in general felt fine, my engine was just sputtering.

I plodded on. Matt6 and Steph were going to be at the 10K mark so I started watching. Sure enough, I hear this, “Baaaaaker!” and as I look up Matt6 has his whole body leaned out on the course 500 meters up. I came in tight to the crowd and got barraged with high fives! My spirits soared. It wasn’t long after that I unexpectedly saw my friends Tess and Sascha with there new baby out cheering!

The 8 mile mark hit and we veered right into Fort Greene. This is always a really pretty part of the course as its all tree lined blocks. A sharp left onto Bedford and then we make our long haul towards Queens. Is it just me or does Bedford take FOREVER! I get so sick of it. On a positive note, I saw my old friend Mike Money on Bedford cheering me on! I screamed, “Money Fresh!” which is how we used to roll back in Baltimore, back in the day.

Somewhere around mile 10 I took a Gu. I also noticed here that my face was covered in dried salt, meaning I was secretly sweating it all out. I slammed down a few Gatorades at the next few aid stations and that seemed to put a little pep back in my step.

I cleared the halfway mark right around 1:26 and took another Gu. I slowly ascended the Pulaski Skyway as the wind ripped through us.

Over in Queens I saw Stephan, Amanda and Rich cheering us on! Soon after all of us were running through the more industrial part of the area, the Queensboro Bridge looming in the distance. My energy was far gone and I was thinking about walking parts of the bridge to try and get it together.

Heading up the bridge, we were once again confronted with a strong icy wind. Rather then walk, I just told myself to take it mile-by-mile. I had been in this place many times before, especially during the run of an Ironman or Half Ironman, where you just need to keep pushing. I did slow my pace down and it felt like time was just slipping by. It was here that I wished I had brought my headphones as back up.

Cruising down the tail end of the bridge I actually got a little choked up thinking about what was waiting for us on the Manhattan side. Slowly the white noise of the cheering squats got louder and louder and then, as we hooked that hard left it all erupted!

This is also the point where things got bad. Heading up 1st Avenue at say 65th Street I started to get light headed. I swerved and starting running up the right side of the avenue, less crowded then the left. I’m not sure who I saw as far as friends go, but the friends that saw e aid I looked the worst they had ever seen me. Evidently my head was bobbling around as I ran.

At 86th Street I got the chills and saw bright flashes and almost passed out or blacked out or something. I pulled over, very shaky, and decided that was it. Game over.

With crowds ablaze I walked off the course, and removed my bib. I had a talk with an older man I met named Noel about if I could finish or not.

I went to the first bodega I could find and got an egg and cheese with sausage on a bagel, a muscle milk and a gatorade and devoured all of them in around 5 minutes. I started to feel flush again and made my way home.

I quickly showered and then started tracking people. I noticed the Abbe had also dropped off the radar and got worried. Luckily Stephan and Amanda texted me that they had Abbe and that she dropped out due to an ankle injury but was otherwise okay.

I then rolled down the block to 93rd and 5th to watch for Jeff (and many other runner friends) who were killing it. I happened to bump into Micheal J. Fox (he’s pour neighbor!) who was cheering for his Team Fox runners.

The rest of the day was spent celebrating at Kinsale Tavern. We had quite a crew of runners with us. It was a total blast!

Although sad that I didn’t finish the race, I got enjoy all of my favorite parts of it anyway. From the journey to the start, hanging out at the start, various points in Brooklyn and the mighty after party with all of my dear friends known as the Runner Army… it was still Christmas to me.