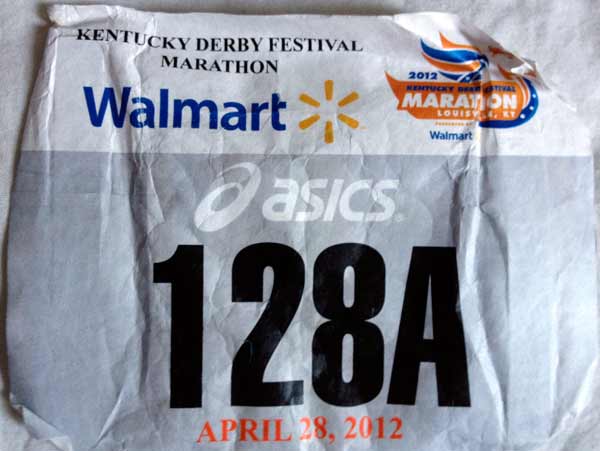 It’s funny how plans can change. Sometimes maybe it’s better to not even have a plan, or a goal for that matter.

Boston was supposed to be my PR marathon and 2 weeks later, The Kentucky Derby Marathon was to be a fun run if you will. That all changed when Boston, or Mother Nature, kicked my ass. I was so bummed and worn out that I wasn’t even into running Kentucky, just come and cheer on Abbe and Katie.

Arriving in Louisville Thursday night we immediately went to ‘Joe’s Old as Dirt’ to meet Katie, Dr. Jordan, her brother Chris and parents Clay and Linda. They were already into some beers so we naturally followed.

We stayed at Katie and Dr. J’s that night and in the morning went on a ‘shake out run.’ Katie showed us around her town, it was really pretty and smelled so fresh, especially compared to NYC.

The weather report said we were going to have great temperatures (55-65 degrees) but thunderstorms in the morning. Not good.

After our run we headed to the Expo to get our bibs. We then went to BBC Brewery to have a hearty lunch. Abbe’s folks Linda and Dave arrived and joined the party. I tried to eat smart and had a rice and bean burrito and an ESB. So far so good… 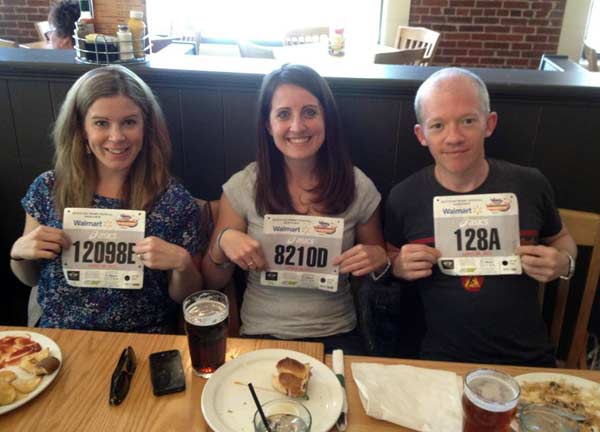 Pre-race dinner was at this really cool place called Bello Rosso. It looked like someone’s house. Well, actually it was a house, it just looked like a family still lived there with tables sprinkled throughout. Way artsy. I had the lasagna. I normally don’t get lasagna out because I make a pretty serious homemade lasagna which is my Mom’s recipe which in turn is our family friend Debbie’s (she Italian) recipe. What I’m trying to say is that Debbie’s recipe kicks ass so why risk eating a lower grade lasagna. I chose to because our waiter said it was good. It showed up and was roughly 3 servings worth of lasagna. Was it good? Yes. Would it feed an entire starving family? True. I ate maybe 1/3rd of it before feeling like I was going to give birth to a lasagna baby. We will come back to this topic in the Race Day section of our story. 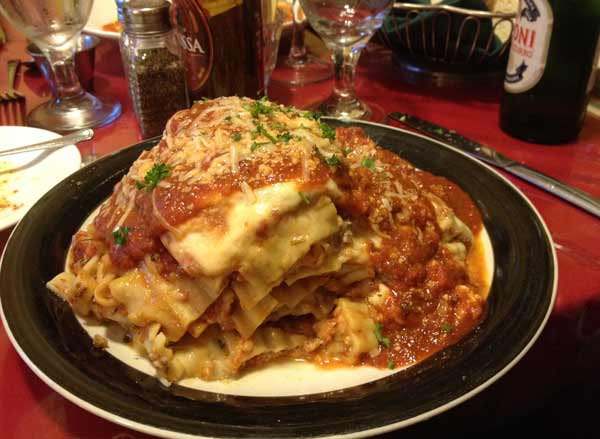 The weather report had also been updated constantly all day and it now looked like 20% chance of thunderstorms. That means no rain in my book. The race was on!

I slept from 10-1 that night and then just lay awake wishing for sleep. I even put on my iPhone App that makes ambient noise to see if it would help. It only helped Abbe stay asleep.

I woke up at 6AM and was not even the slightest bit hungry. In fact, I was full and still pregnant with my lasagna baby. I did manage to force down an apple. (I love apples.)

Abbe and I were picked up by Katie and Dr. J at 6:45. It was clear skies and 45 degrees. Had it been raining it would have been horrible. Dr. J dropped us off a block from the corrals and Katie, Abbe and I made our way over. We had 30 minutes to spare which is plenty in a race where there wasn’t high security staging areas… I’m talking to you Boston.

We hugged and wished each other well before departing for corrals. Up in my corral I found it really fascinating from a sociological stand point. All the local speedsters knew each other, just like the New York scene! People were high fiving and yelling to each other, very cool Kentucky.

I saw the Start mat but chose to hang back and play ‘Dark Horse’ this go around. I still wasn’t even sure what was going to happen and after Boston I had been kind of doubting myself. “Had I lost it? Am I slowing down?”

The gun went off and we pushed forward down the main streets of Louisville in a tight pack. My music was off and I was doing systems checks left and right. (Think Top Gun) “How are the legs? Am I hungry? Do I have any tightness left from Boston? Is my heart beating? Did I bring my free beer ticket for the end of the race?”

After over a mile of straightaway we cut south and then back west the way we had come. Remember, I was running with Half Marathoners too, so there was no easy way to tell who to pace with.

I was going way too fast. I thought about where I needed to be and that was in the 6:45 range in order to break 3. I thought about Boston and how that was my ‘plan’ because that’s what speed I train at. I was mentally limiting myself. I was telling myself I wasn’t capable of anything but a slight sub3. I was playing it safe.

I said that out loud by the way. My legs felt awesome and I started speeding up faster, passing more people.

We were now running due south towards Iroquois Park. I substituted Iroquois Park with the Red Mountain from IMAZ and then it all became familiar. The crowds were great and the kids were so cute high fiving us. What a nice break from the loud  Boston crowds.

At Mile 8 we turned into Churchill Downs! We ran under into the tunnel and then out onto the outfield. There were horses warming up (or doing whatever it is horses do a week before a race. Tapering?) It was a definite highlight of the run.

As soon as we came back onto the course they split the Half Marathoners, who started the return, and the Marathoners who continued south. It emptied out and the only guy in front of me was like 100 yards up. Seriously? Where is everyone.We were running on a street lined neighborhood street and I was loving it. I even had a snack, that’s right a Vanilla Gu! What a delicious treat at 8:30 in the morning.

Just past Mile 9 was our cheer squad consisting of Dr. J, Linda 1, Linda 2, Dave, Clay, Chris, Kristin, and Adam complete with signs and making some serious noise! It was awesome!

My goal at this point was actually to just hold my 6:23 average pace as long as I could and I was doing okay! Then… well then came Iroquois Park. 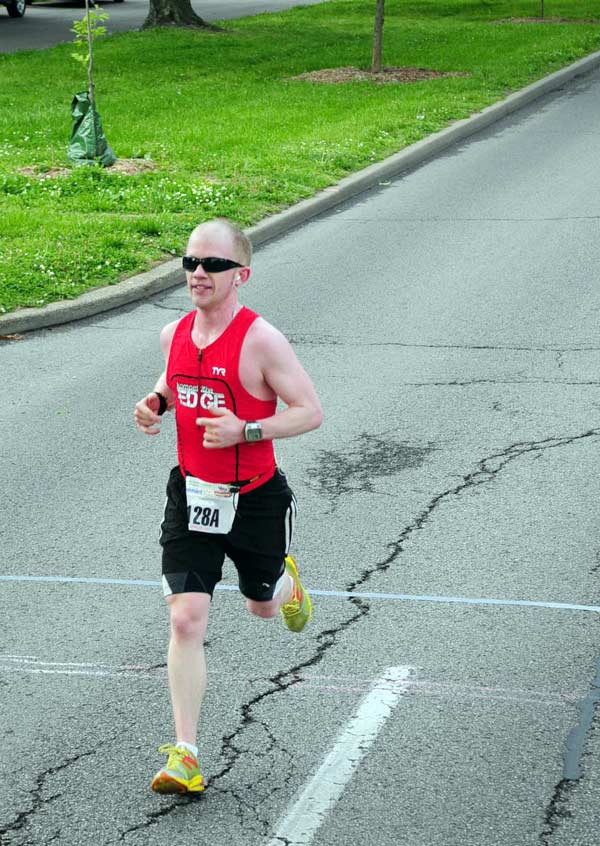 Miles 11-15 were the turnaround location and also wound through a hilly (yet scenic) park. It begins with a dramatic winding uphill for, oh say 1/2 a mile and then thrashes your legs with ups and downs, lefts and rights over the next 3 miles. It was very wooded and at this point I had no one visible for in front of me or behind me. At times I often wondered if I was even going the right way. Perhaps I was supposed to turn around somewhere and head back?

I also held off the urge to pee. Those trees were calling my name man, “C’mon Baker, take a break, no one is around.” At Mile 14 I kinda figured we were looping back around and just tried to maintain some speed. I used the downhills to my advantage even though I knew I would pay for it later.

I was never so happy to leave the wilderness. Back at the entrance I saw the bulk of the marathoners entering the park as I left it. People cheered me on. I blasted back down onto the street and plunged forward, my body slowly adjusting to not climbing hills anymore. It felt good but I knew I had a ways to go.

These miles were easy as I knew the course and I had everyone coming at me wishing me luck and telling me stuff like, “You’re in 4th place.” I saw Abbe coming up and we high fived and smiled! Then, I passed our cheer squad again, this time they were ready with the cameras! One thing that was difficult was wishing people good luck back. I was exhausted and every 5 feet someone yelled, “Good pace.” “Great work you’re killing it!” and so forth. Most of the time I simply waved or nodded to them but I really wanted to yell back.

I saw Katie cruising up around Mile 19 and guess what we did? That’s right, we high fived! 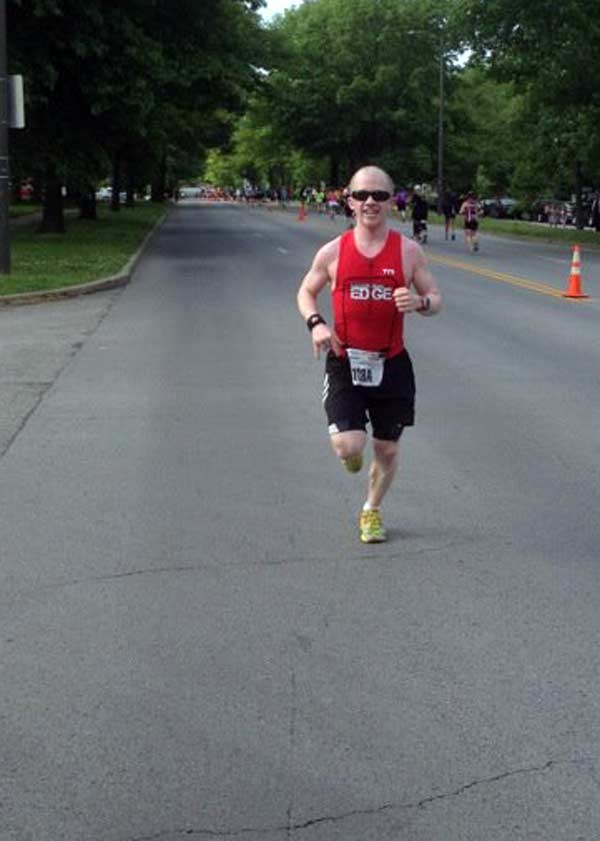 It was also right around this point that we temporarily merged (2 miles) back into the back portion of the Half Marathon pathway. Not a good logistical decision. It was like entering the freeway doing 80 and up ahead was stand still traffic. I did my best to be polite and bob and weave past people on the right side. It was actually kind of fun.

Some runner also yelled, “Go KE!” which is the abbreviated name of my team Kompetitive Edge. This guy knew the team for sure and I thought that was quite cool.

At Mile 20ish the Marathoners split right onto an open roadway. It was me and one other guy wearing orange who was way ahead of me. I ate my second and last Gu. Things started to get rough right around here. I was by myself with little or no crowds, the sun was rising, and it was the last 6 miles of a marathon (duh). I just focused my eyes on the orange of the guy in front of me and kept moving.

I started doing the math in my head here and got really emotional at the prospect of a PR. I told myself to cool it and stay focused, I could get all weepy when I got my ice cold beer at the finish.

Whoever said there were no hills at the end of this course is the biggest ass. I turned a cornier at Mile 22 and was confronted with a serious uphill. Then, at the top (being excited to be done with the hill) I saw the next hill, even bigger, up ahead! I tried my best to just swing my arms and get through them and I did. I didn’t walk at all during this marathon, not even at aid stations.

Something came over me at the start of Mile 25. I got like a second wind or something and really dug down deep. We turned the last left and there was this immense straight-away (not too dissimilar to Boston) and I just punched it. I swung around like a bat out of hell, scaring a few Half Mary walkers and jammed through the Finish line feeling triumphant. 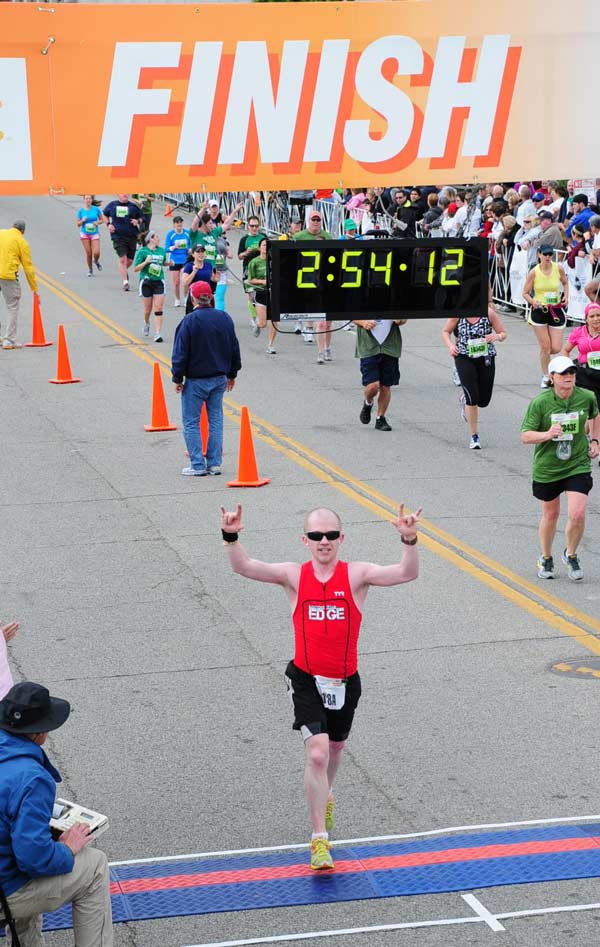 After the finish I walked back to Mile 25 to cheer on Abbe and Katie. I found a really great spot and cheered everyone along. When Abbe showed up I jumped in and ran with her asking how she was and giving her the rest of the lay of the land. I dipped out and made my way back to the Finish to find her.

At the end of the run we all met up. Abbe and Katie both PR’d! Congrats gals, you did so great! We had a few beers before heading out in search of worthy food. 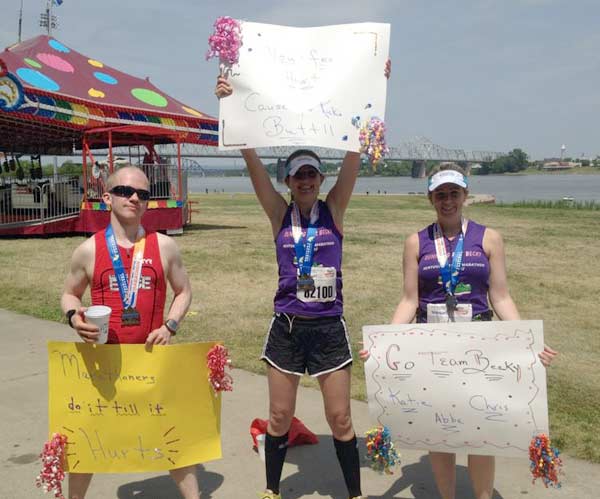 That night we all celebrated with some Kentucky BBQ and some bourbon! It was well deserved.

Thanks to my sponsor Kompetitive Edge!
Thanks to our hosts Katie and Dr. J and the whole cheer squad!

What did I learn in today’s episode? Stop limiting yourself to your safety zone. Set it off!

« The Cure for Pain
New York I Love You »