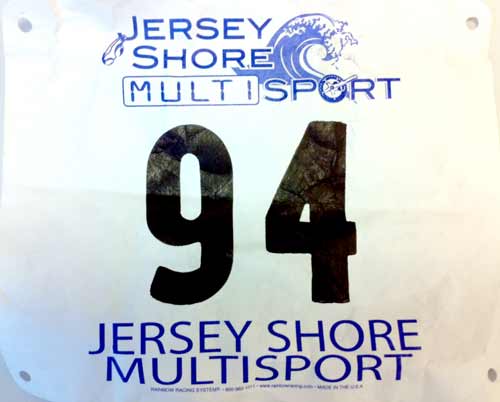 The Lavaman Sprint Triathlon would mark my first triathlon for the 2011 season. I was very excited.

Friday night right after work I met Mike and Ed of the ‘Dad Posse’ by Penn Station and we hopped a train to Little Silver, NJ. We popped a few Coronas and caught up on life.

After a brief stint at Mike’s place in Little Silver we headed south to Belmar. We were meeting Jim (he was driving down with our bikes) at a place called Klein’s Fish Market. Klein’s ‘wowed’ all of us with their dockside seating, fresh fish and beach vibe. Personally, I was having a little slice of heaven, a.k.a…. steamed clams.

SIDENOTE: The waitress was cracking us up. She kept forgetting to bring us things (like forks) and proceeded to drop an entire beer in my lap. As it went down it also took some clam butter with it. We all just laughed and made the best of it. Yes, those jeans are in the laundry now.

We made it to Granny’s house (Jim’s grandma) by 11PM. Her house literally sits right on the bike course, it’ so perfect!

Waking up at 5:30AM is never easy, especially on a Saturday morning. After a quick cup of Cafe Bustelo, we set out on our bikes to ride the 1/8th of a mile to the start.

After check-in and setting up transition we all walked the beach to get to the swim start which was half a mile from transition. We jumped in the bay with 15 minutes until start. The water was perfect! The 3 of us bobbed around close to the start, but not too close as I couldn’t stand in the deeper water… Ed and Jim have a couple inches of height on me. A fist bump and then the start sounded.

The men start was about 200 people and it was pretty rough swimming. For some reason, I was enjoying it. I was pushing legs out of my face and getting my feet tickled by countless other swimmers.

SIDENOTE: Although it has only been 2 weeks since the Great Hudson River Swim, I felt 1 million times stronger, more confident and happy to be in the water swimming.

I really dug in and was focused on my form, stretching my body’s length and pulling the water. Running out of the bay, I unzipped my suit and was doing a good job of undressing while I ran.  Normally, my wetsuit top gets caught on my head and I’m running like a blind man into things.

Jumping onto my bike, my legs were ready to unlock and get some speed going. The first place female (who is the sickest female bike rider I have ever seen) was riding along side of me for a mile or so before she made her assault and disappeared.

The bike course is 3 loops with 180 degree turns at each end so you can see who you are chasing and who is chasing you! I was pushing really hard and passing a lot of people. I think once I hit the second lap my legs were really fired up and cranking. I set my eyes forward and just cranked.

During the bike I got so focused on passing people I realized I wasn’t enjoying the ride, or the scenery. I thought to myself, have fun, relax! You love bike riding, so take it all in, not just the chase! And I did. 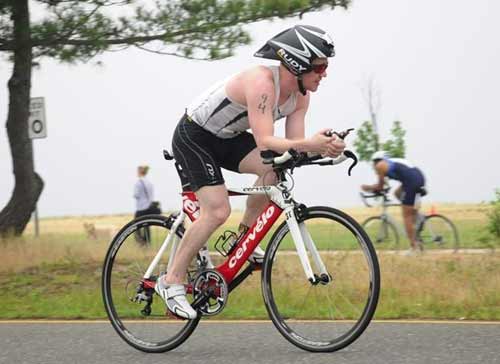 As I was finishing up my bike, I saw a few guys starting the run. They easily had 5 minutes and I tried to do the math on what it would take to catch them. “Run like an animal.”

Coming out of transition onto the run course I could feel someone on my ass. I let him pass me but kept him in my sights. My legs were a bit wonky (mostly my quads) and the first mile I chased him and tried to get my legs into run mode. At mile 2 that’s exactly what happened. I felt awesome and had no pain. It was at this point that the guy I was tailing started to slow up and look tired.

I caught him and I guess since I was in a pretty happy mood I yelled “C’mon Penn (he had a Penn Cycling hat on) let’s do this!” I flanked him and he held on to my pace. He told me we ran mile 1 in 5:30 which might have been a bad idea. I assured him it was a great idea and that we only had a few miles to go.

Together, we started passing a lot of runners. At one pint Ed was on the other side of the run course and yelled “Yea Baker! Go!” Penn was like “Are you on some kind of a team?” “No, those are just my buddies. We are out for a fun time.”

We didn’t do too much talking during our attack on the run course, but every once in awhile Penn would tell me were were hitting 6 minute miles, which I was happy about. When Mile 3 approached, I yelled to him, “1 to go, lets see how many more guys we can pick off!” He smiled and looked ahead, saying “We definitely got those 2! Lets go.”

I felt a weird presence during the last 800 meters or so, and then I realized some guy was chasing US down! I yelled to Penn that we need to step it up, we were being tailed. We finished with the guy literally steps behind us, but we held him off! It was also the first time I didn’t have the need to sprint the finish like I normally do. I guess I was just enjoying the company. 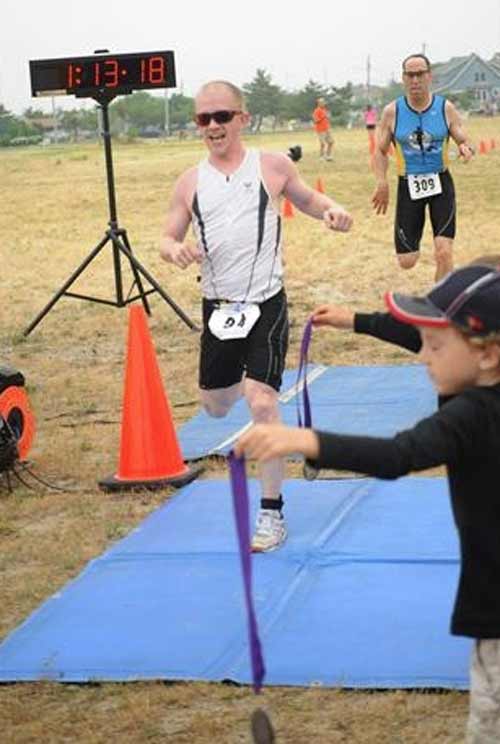 I immediately went to the water station and slammed a few cups. Penn came over and introduced himself. His name was Eric. He thanked me for helping him out back at Mile 2 when he was fatigued. I in turn, thanked him as he kept my pace up as well.

The first place female was hanging out in the tent too and I gave her a congrats. She crushed it.

I then went over the finish line to cheer and wait for the guys. Jim finished, followed by Ed.

All of us had a really great time out there! What a great start to the season!

Next up is the ‘Run for Bruce’ this Saturday.
—

This year marks the inaugural Memorial run for Bruce Baker. Join us at the starting line at Columbus Circle at 11AM. From there we will zip down the West Side Highway with a final destination of PJ Clarke’s on the Hudson (250 Vesey St, New York, NY, 10281) for food and libation.

« In Memory of My Dad
First annual ‘Run for Bruce’ »