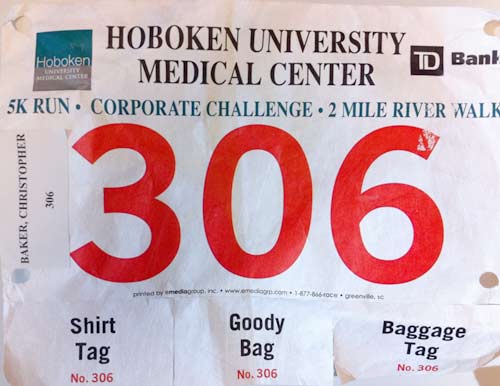 This weekend I would attempt a double header 5K. Meaning… the first 5K on Saturday morning and the second on Sunday. I was very curious (scientifically) as to the outcome of both. Would I be faster on the first race, or would that race simply warm me up for Sunday? Stay tuned.

Erika and I left Manhattan on the Hoboken Ferry (it’s really the best way to get there, the Path is crap) Friday night after work. Our plan was to meet up with Jenn and Josh, drink our face off, wake up and blaze the Hoboken UMC 5K.

Erika, Josh, and I started at a cute Mexican restaurant and began the night with a few margaritas. Shortly after we met Jenn at their place to relax on their back patio. After a few more drinks we decided that a Nintendo Wii contest was in order.

We woke up at 7:45AM after Mike and Meryl arrived to join us for the race. All of us feeling a bit groggy, we made our way out to the start of the race.

It was beautiful out and couldn’t be more perfect for a run.

Jenn (who is pretty fast) and I lined up right in front. I wasn’t sure what I felt like doing as far as the run was concerned, but I knew once we were moving I would figure it out. 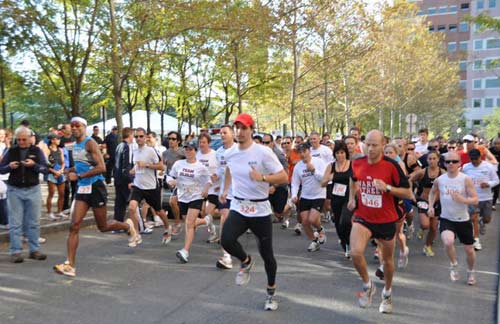 The gun went off and the group lunged forward. I held down the left flank and in 30 seconds found myself leading the group. I hate being in this position. It’s called ‘being the rabbit’ and personally I would rather chase the rabbit. (Not to be confused with chasing the dragon.)

Sure enough 3 guys overtook me in at mile 1. It was there that my cousin Phyllis and her boyfriend John made an appearance on the sidelines, cheering me on! Family rules.

It was an out and back course and as the 3 leaders looped around I smiled and pointed at them as if to say “I’m coming for ya!” but they didn’t respond. I was very disappointed as I love fun sportsmen that get my humor. In reality, I would not be coming for them as they were cooking.

At mile 2 I felt good but was really pushing and starting to notice bits a fatigue setting in. I remembered what Danny Abshire from Newton told me during a running workshop in Central Park, “Shake it off, loosen up, then regain your form. It’s what Craig Alexander does.” I did this and it helped a lot. I un-kinked some things and kept along.

I saw Erika and we cheered at each other!

Coming down the finishing stretch there was no way I was going to overtake the lead guys, but on the other hand no one was behind me closing in.

I finished in 17:37 and in 3rd place overall! One of the guys running in the pack ahead wasn’t registered but just want to run it. And I, and I thought I was nuts!

Jenn came in 3rd female overall, then Erika came in 1st in her age group! The 6 of us walked away with 3 trophies!

Erika and I couldn’t stay for brunch so we took the ferry back home. 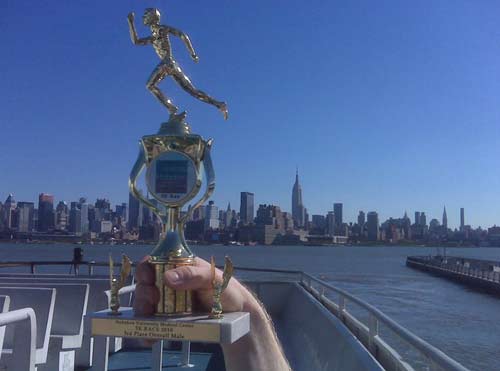 Later on, Erika’s trophy planted a kiss on mine. 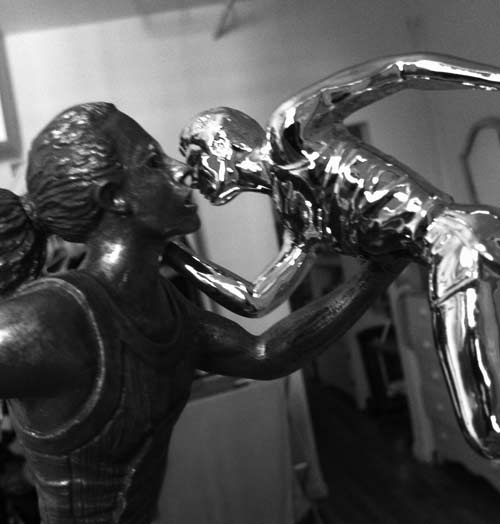