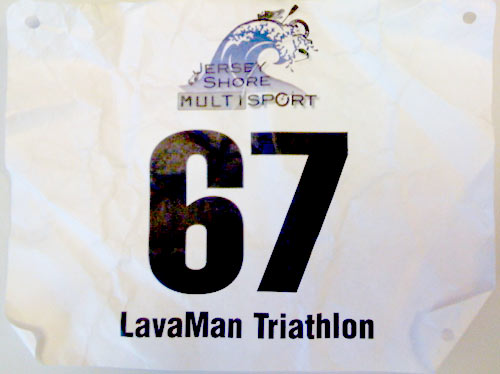 Jim (from ‘Dad Posse’) had us sign up for the Lavaman Sprint Triathlon for 2 reasons. 1: triathlons are awesome 2: the course went by his Grandma’s house so we had a place to stay and easy access to the start!

The plan was as follows…

Saturday afternoon Jim and I drive down to Granny’s. Ed (also racing) would be either driving down to meet us later that night or leave at 4AM the next morning to arrive in time for the start. Mike and Gio would show up once the race had started to cheer us on.

Saturday morning I took a 4 mile run in the sun then hopped on my bike to meet Erika and Marie downtown to go to an art festival in Brooklyn. I parked my bike in Union Square then we took the L Train to the center of the hipster world. Any of you who know me know I despise hipsters and if I had my way I would hunt them. Full beard in the 90 degree summer sun = retarded.

We got back to Union square just after 1PM and seeing as I had til 4PM to play, I rode my bike out to Fort Greene to see Jasika and Claire who were having an impromptu gathering. Jasika made us Pear Sangria which was out of this world refreshing! After catching up with them I took off to head back to the Upper East Side. It took 40 minutes on my bike – not bad.

Jim picked me up and we were on the road around 6PM headed to Lavalette, New Jersey!

We arrived at the Jersey Shore around 8PM and after quickly saying hello to Granny we went out to get some food. We stopped at Mia’s and had some pasta. It was a cool and windy night and we were hoping the wind would ease up for tomorrow.

Back at the house we hung out in the garage drinking beers and working on our bikes, preparing them for the morning’s battle. Around 10:30 we were winding down for bed (we had to wake up at 5AM) when we got a text that Ed had just left Manhattan en-route to us! It’s easily a 90 minute drive. Jim and I had a quick conference and decided that in all fairness to Ed, we couldn’t go to sleep until he arrived. That would have given us the unfair advantage of 2 hours more sleep than him on race day, duh. Therefore, we continued drinking beers on the roof deck.

Ed showed up around 1 in the morning! In fairness to us, Ed insisted he have a beer! We rolled into bed at 2AM!

No sooner did we lie down, we have to pick our heavy heads off the pillow. It actually hurts my mind and body right now just thinking back to how I felt!

Jim dug around the pantry for awhile and found some American Lite coffee which may have been from the late 70s. It was beyond horrible and yet… I still drank all of it!

My head cleared a little once we hopped on our bikes to ride to transition.

I set up my transition pretty quick then made my way over to Jim and Ed to see how they were doing. For such a small and local race there were some very hard core bikes floating around. Some to the tune of $10,000! There was also this total jerk in front of Jim who made me upset. He thought he was away “too cool for school.” In these kinds of events, 99 percent of the racers are awesome, totally down to earth, and fun to talk to. This guy was part of the remaining 1 percent. During the bike course he would become my target.

Before the start, we had time to jump into the Bay. It was really shallow, but the water was nice. I got stung by a jellyfish. He would not be the only jellyfish I encountered during this race. Mike had showed up and was taking pictures from the shore.

6:50 was my start and I waded into the water to wait for the gun. I wasn’t nervous at all and thought, finally, all the open water swims and triathlons had eased my mind. The gun went off and I dove in, digging hard. 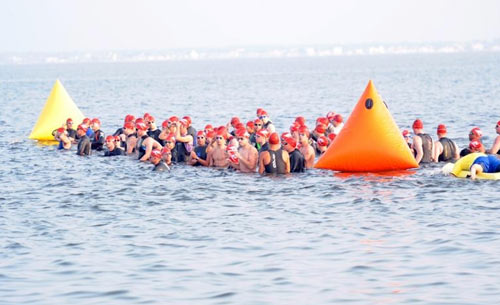 After a hundred yards or so I slowed up my pace and caught my rhythm. I attempted a new technique I was working on last Wednesday in the pool and thought it was speeding me up. I finished the .38 mile swim in 109th position which was a slight improvement since the Rev3, but still wasn’t up to my standards. 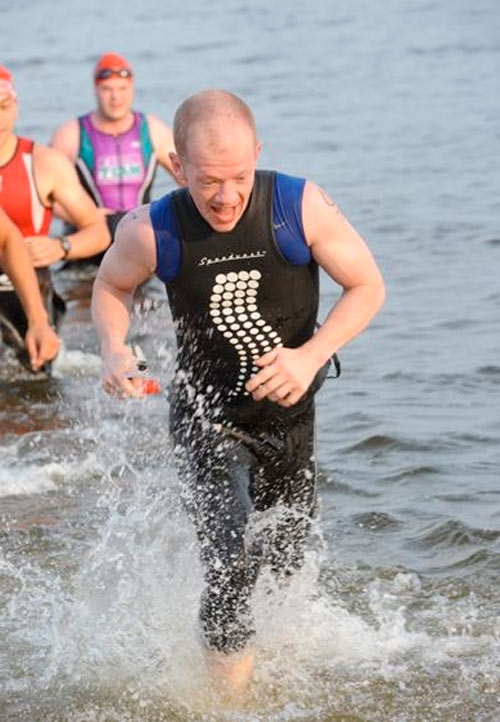 Running out of the water I ran by Gio who was yelling something like “Hustle Baker!!!”

Made it through T1 in good time and jumped on the bike, taking off in hot pursuit of the leaders. (Did you notice that my T1 and T2 times are identical? Strange indeed.)

The bike course was a 3 loop, out and back, so you could always see whoever was in front of you coming back in the opposite direction. This is great because you can figure out how many spots behind you are. It also sucks, because you’re like “Seriously? How is that guy biking so fast! I have to catch him?”

The first lap was tough, but as I came around into my second lap, I saw that jerk from transition up ahead and really let my legs burn. I passed him a few minutes later and never looked back. I just stayed in aero position and let the pain start, never coasting.

I saw Ed and Jim a few times on the coarse and we yelled to each other! I also saw Mike and Gio at transition numerous times, taking pictures and yelling for us to kill it!

As I pulled into T2 to ditch my bike, I saw that there were runners already out and I knew I had some work to do.

Bolting onto the road my legs were not ready at all! It’s not that they hurt, I just can’t get up to full speed, like being stuck in the mud in a car. I passed a few guys and then around mile 1 we hit an aid station where I poured water on my head and took off! My legs were warmed up and in full swing.

SIDENOTE: Erika and I participated in a running clinic hosted by Danny Abshire, Ian Adamson, and Ian Anderson from Newton Running on Tuesday that taught me a lot about form. At a few moments in this run, I used what I had learned and it definitely helped me increase my pace and stay focused. Thanks guys!

At this point I was cruising at a 6:15-6:20 pace and steadily gaining on people. I felt good, but the sun was out and heating things up real fast. I wanted this to be done. Coming around the corner I could see the yellow of the finish in sight and sped forward. 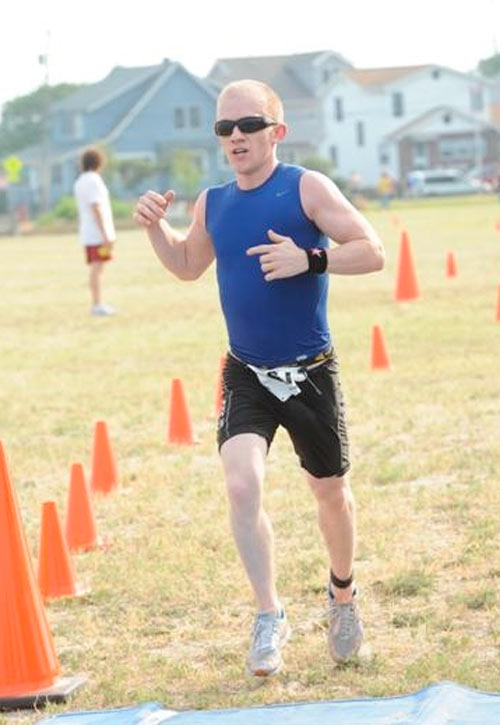 I found Mike and we cheered on Jim and Ed as they came through the finish at their respective times.

We grabbed food and watched the awards. I ended up getting a trophy for 3rd in my age group which was cool! 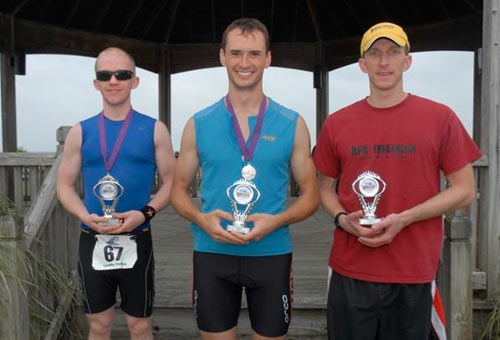 We rode back to Granny’s where we eventually took off to head back. Jim dropped me off at my cousin Cat’s grad party in North Jersey where we rocked until 4PM or so. Was I deliriously tired? Yes. Was all the pain and sleep deprivation worth it? Indeed! 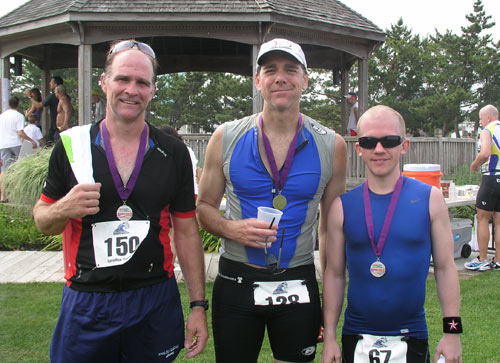 I leave you (anyone who has ever considered doing a triathlon) with this…
This was Ed’s second triathlon (his first being the week before!) and he has only been training for 9 months or so. As he sat eating his bagel after the race looking somewhat serious, somewhat pissed, kinda staring off, I said “Hey Ed, what’s up, you good?” He chewed for a second then stopped and said, “That was Awesome!!!”