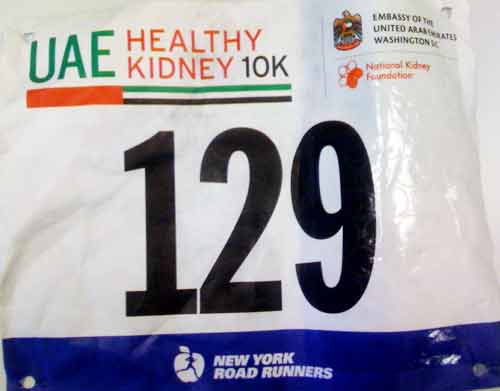 This Sunday would mark the second running of the Healthy Kidney 10K for me and also be the first time in 2 weeks I had run (pending a track workout Tuesday) since the NJ Marathon.

I was in fact quite excited to NOT be running a race of marathon distance!

As work ended on Friday my mind wasn’t in ‘work is over’ mood, in fact I was getting fired up. That’s because I was slated to move Tuesday from my Chelsea 2-bed apartment to a new Upper East Side 1-bedroom! I had been packing since Wednesday and had lots more to do.

My co-worker and friend Annie offered to give me some boxes (as she had just moved) so I went to her apartment. I then went home, grabbed my laundry, and headed to the grocery store. One thing I overlooked in moving was that I needed a solid pre-race meal!

Shrimp Scampi it was. This dish never fails me on race day. Proteins, carbs, butter… everything the body needs to survive!

After dinner, I watched the KONA Ironman World Championships 2004 (one of my favorite ones) to get inspired, packed and then went to bed around 12.

I woke up at 6:30Am and got some coffee on. SIDENOTE: not sure if any of you know this, but for some reason I don’t need an alarm clock to wake up if it’s not earlier than say 5AM. I blame my Dad.

I packed up a few more boxes before heading out on my bike.

It was amazing out and was turning into perfect racing conditions! I locked up my ride by the Band shell and after searching for Ed to no avail, I headed to baggage and then my corral. It was here that my old pal Kevin Masse from Front Runners ran into me. We caught up a bit and wished each other well on our race.

Blue Corral was pretty empty when I arrived but it was soon teeming with runners stretching, jumping and smelling of Icy Hot which incidentally makes me nauseous.

A word from our sponsors (namely the people supplying the huge cash awards for the winners)… a little National Anthem action… and then we were off!

The first mile was a bit packed but we were cooking. In a big money race like this you get all the Olympic runners and speedsters out so even the front of the pack is crowded!

Mile 2 to 3 opened up the group a bit and we were running single file ‘race style’ now. I can normally gauge my body and how I’m feeling at this point and make a decision as to whether this was a ‘good’ race day or ‘bad’ race day. I was leaning more toward the bad as I was feeling a touch winded.

Harlem Hill came up and I blazed up it swinging my arms like a a madman (as I was taught to do on Tuesday Speed training). At the apex I took a deep breath, then started striding down the other side attempting to gain some time. Mile 4 hit at 24 minutes and change.

Running down the straight away by 89th street I kept trying to remind myself of the Ultra in November. During that race I had to run 9 laps around the park and the finish line was here. When I was getting tired I just said “Baker, you ran this 9 times! This is just once, you’re almost done, go go go!” It did help, but only psychologically, my legs were still burning.

At Mile 5 I ended up running along a Central Park Track Club racer and we paced each other for the last mile. Another taller fellow joined in pursuit behind me soon after. I really think this may have helped my finishing time a lot.

Rounding the bottom loop of the Park by Columbus Circle we hit the 6 Mile mark with 400 meters to go at 36:30 or so and then it dawned on me… I had been doing bad math the whole time, I was indeed on point to hit my time!

I tried to kick it up a notch but I was already blazing. It wasn’t until I saw the finish line (don’t fire until you see the whites of their eyes!) that I pulled the trigger. I flew through the finish line with a time of 37:11 which was a whole 50 seconds under my goal! I felt great and had a huge smile. 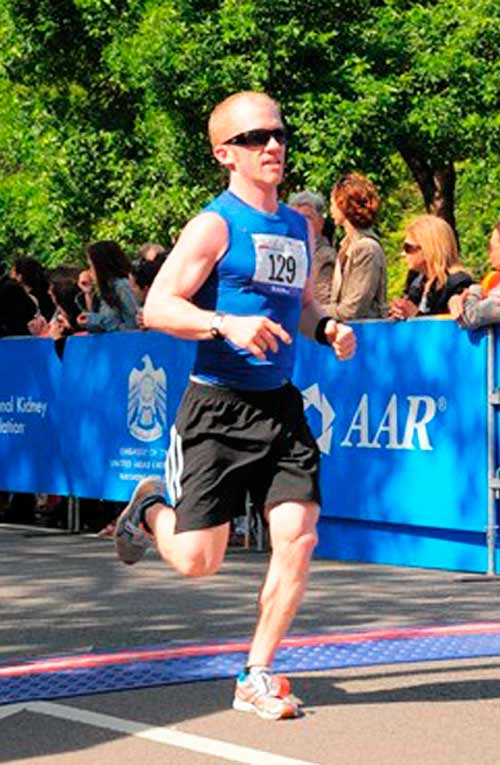 After grabbing a few waters I headed down to the Finish to cheer on all my friends who were running… Ed, Matt 6, Erin, Frankie, and Elizabeth to name a few. I watched for 30-45 minutes and didn’t see any of them! I was also texting Erika so they may have slipped by while my head was down.

Back up at the main area I ran into Matt 6, Erin and Frankie. We decided to go grab some food and at Matt’s suggestion we hit Time Warner’s Whole Foods. It was amazing. They have a breakfast buffet and delicious coffee. We ate and chatted about our races before heading our separate ways. What a great start to a beautiful day! Now back to packing…