The Lava Love Triathlon (formerly known as Lavaman) would mark my 3rd triathlon in just over a week. It is one of my favorite races and I was really looking forward to it, especially since the weather looked optimum, unlike last weeks Rev 3 flooding!

How do you prepare for a Sprint Triathlon? A 3-legged race of course! That was Thursday night, the following morning at 4:45AM Jim, Ed (of the ‘Dad Posse’) and I left to pick up Mike (also of ‘Dad Posse’ fame) to go fishing. It was going to be another double header weekend but this time we subbed out a Tri with fishing.

Our boat left out of teh Red Bank area and we spent a gorgeous morning fishing off of Sandy Hook. We caught maybe 4 fluke, but for me, just being out on the water was relaxing. I kept thinking to myself, “If we capsized, I could totally swim over to there. Or there, or even over to there.”

I am also kind of living out of a bag the last few weeks since my apartment is being renovated so I forgot sneakers to wear on the boat. My Newton MV2 racing flats actually worked out great! 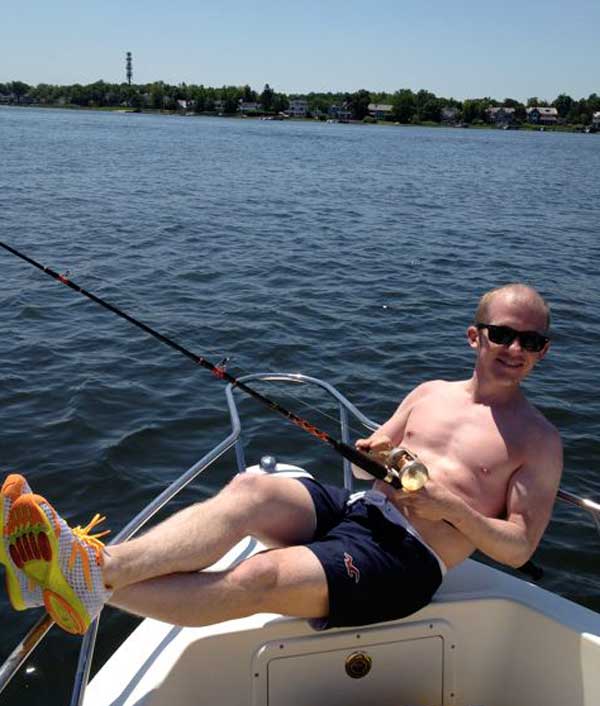 Back at Mike’s we had a few beers before setting off for Lavalette, NJ. Since we hadn’t caught any fish, we were on a mission for seafood. Were does one get their seafood fix down on the Jersey Shore? KLEINS!

Kleins rules. It sits out on the waterway where all the boats go in and out fishing so it’s a blast to watch. They also have everything you could imagine to eat, from the ocean of course. We wanted clams so we started with 2 dozen steamed cherry stones and 1 dozen cherry stones on the half shell. These were like the biggest clams I have ever seen. Almost too big. For my unnecessary main entree, I chose the blackened Mahi sandwich and it was spectacular! 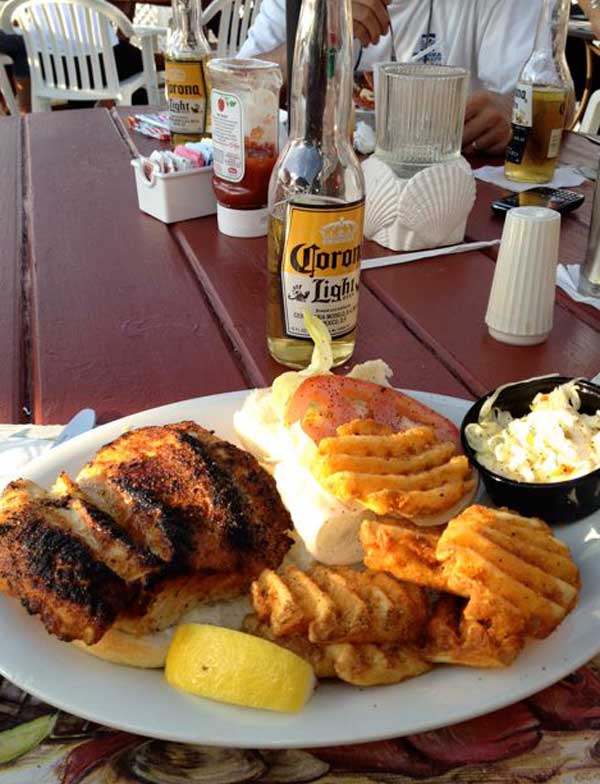 Back on the road Ed suggested we stop for ice cream. Hoffman’s is a legendary home made ice cream shop a few minutes from Jim’s Grandma’s house so we simply had to go. I was now beyond stuffed. 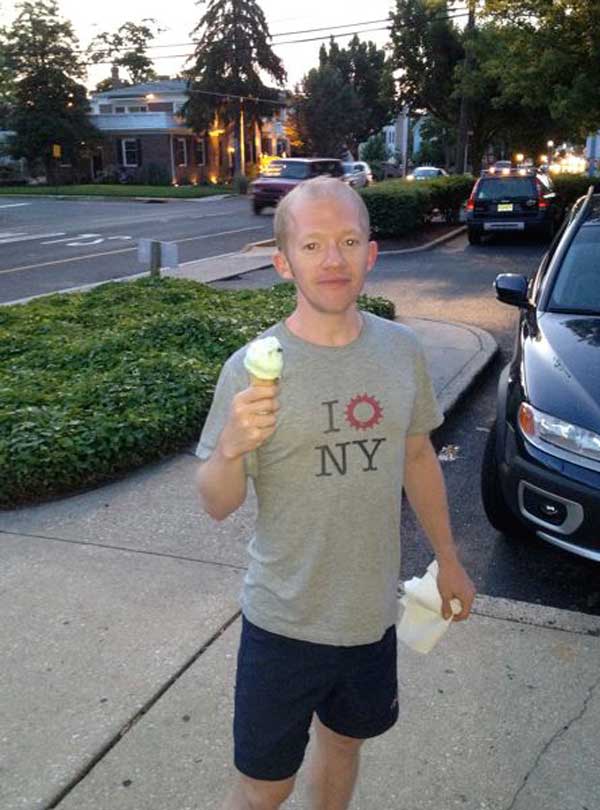 At Granny’s, we unpacked all 4 of our bikes, geeked out on them for a little while, riding them up and down the dark neighborhood streets, had a beer and went to bed.

We were all up between 4:30 and 5:30AM bright and bushy eyed. There sure are a hell of a lotta birds that love to get up early in Lavalette! Waking up multiple days in a row before 5AM has now started not to faze me which is frightening.

Granny’s house is literally on the bike course! We hopped on our rides and took the 5 minute ride over to transition. We were like a bad ass Tri-gang rolling 4 deep.

After setting up my area which took all of 3 minutes I went over to assist Mike. This was his FIRST EVER triathlon (Jim just signed him up and sent him the registration confirm) so I wanted to make sure he was good. I still remember my first tri and how my buddy Cenk walked me through all the steps. I tried to pay it back.

Down at the water we found Gio who was also racing. Together, all 5 of us entered the choppy bay and started wading out to the start buoys. The water was really nice and I was enjoying the rough waves. 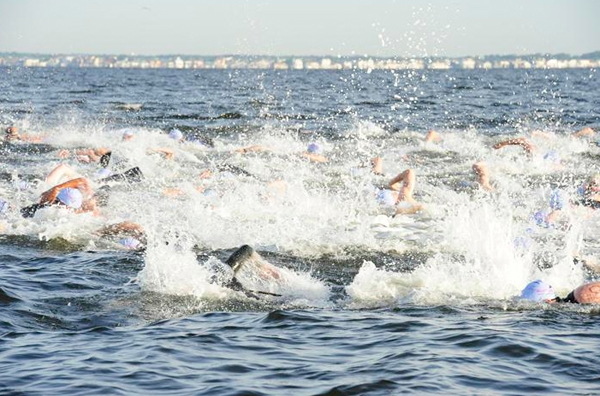 The gun went off and it was total chaos. The only other worse chaotic swim has been Ironman for me. I don’t know why, maybe the mass start or the chop? It was pretty nuts though for a sprint. I have done enough of these now that getting kicked in the face or having my head dunked doesn’t really upset me. In fact, I kind of enjoy the survival aspect of it.  I did get kind of freaked out though after a quick kick when I thought to myself, “Hey, wouldn’t it be crazy if I got kicked so hard I got knocked out?” I quickly started thinking about rainbows and beer.

My swim went well. I was sighting on point and my form seemed fluid. 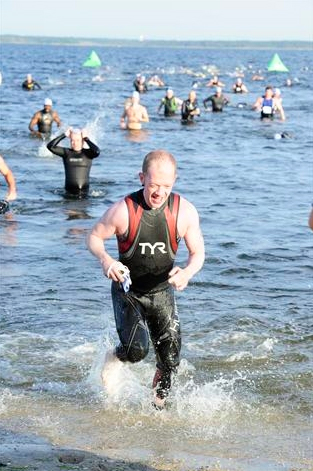 As I ran out of the water I was so excited to get on my bike. This is a fast course and I was ready to drop the pedal to the metal. This being the 3rd Tri in 2 weekends, my new QR Illicito is pretty broken in and I am comfortable maxing out my speed.

As usual, the first mile my legs were on fire! I started analyzing it a bit and then came up with this. In a sprint tri, when you get on the bike its similar to the start of a 5K running race, all or nothing. Hence the pain.

After passing a few folks I equalized with most of the pack and started churning the cranks building my pace. I was now having a blast! The course is 3 loops on an oval course with 2 180 degree turns. You can see who is ahead of you coming the other way which is very handy. The lead bikers were 3-5 minutes ahead of me which was a huge lead, especially since they were probably clocking 21-23 MPH. Still, I pressed on grinding those gears pushing forward, passing people here and there. 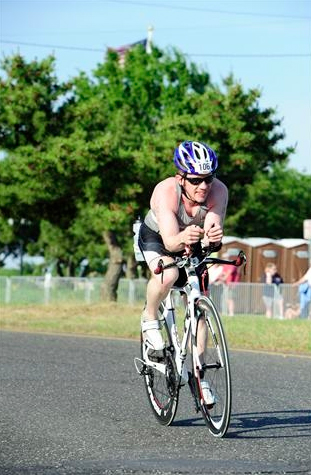 On the 3rd and final loop I passed Ed, then Mike and then saw Jim who was coming the other direction as he was ahead of me. We all did some yelling and cheering to each other, like we always do. I asked Mike how he was doing (this being his first triathlon) and responded with, “This is so awesome!”

Seeing the guys broke my train of thought and I wasn’t sure if I was on my last loop or the second loop anymore. I am REALLY glad that I opted for last loop (because it was correct) and also because otherwise I would have maybe com in last place.

This weekend I was running with my Newton MV2 racing flats (I love me some racing flats) instead of their Distancias like last weekend. These suckers are fast man let me tell you. It’s like running in slippers.

Out on the course with the bikers, I didn’t want to red line it just yet so I just shook out my legs. I didn’t have a Garmin with me as I have been trying to get in tune with my speed on my own. I have no idea if it’s working so I basically just run as fast as I can. After Mile 1 I was ready and dropped the hammer. I was steadily passing a lot of people and enjoying myself. I remember thinking how it didn’t hurt nearly as much as it did last year. Maybe I am evolving as an athlete?

I had some fun chats with people as I passed. One guy yelled, “Hey, you passed me last year! Whats up?” “Nothing. How ya been?” “Good!” “Cool, have a nice race!”

One guy was really pumped for me and was screaming for me to go get after it. Yessir, I was trying.

At Mile 2.5 I finally caught up to Jim. He told me to try and catch Gio who was up ahead. A daunting task but why not?

Pressing forward I saw him just before the turnaround which meant he was 1/4 mile ahead of me. I was running 6:20’s but there was no way I was catching him.

Finishing up I felt great and cruised through at 1:16:24. Gio high fived me then we waited for Jim, Mike and Ed to come through.

We were trying to figure out if any of us had gotten podium and really could decide. It looked like maybe I was 6th or something. Before the awards, Jim and I biked off to get some coffee for the gang. Just as we returned and were passing out drinks I heard over the loudspeaker, “Christopher Baker!” I was like , “What? What did I do?” I had gotten 3rd in my age group and won a pint glass with the race name! SIDENOTE: I collect pint glasses with race names and have Ironman Arizona, Boston Marathon, and The Boilermaker to name a few. I could not have been more thrilled at this particular award! 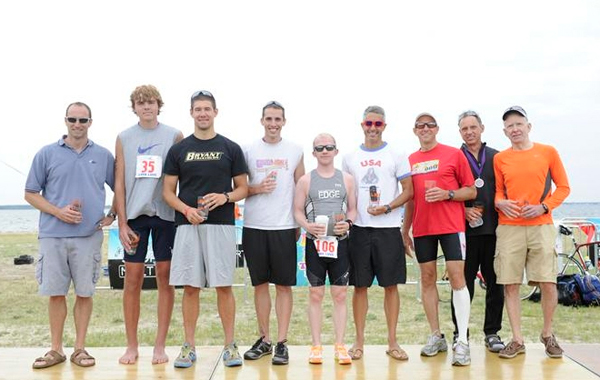 It turns out Gio also got an award too! How cool! 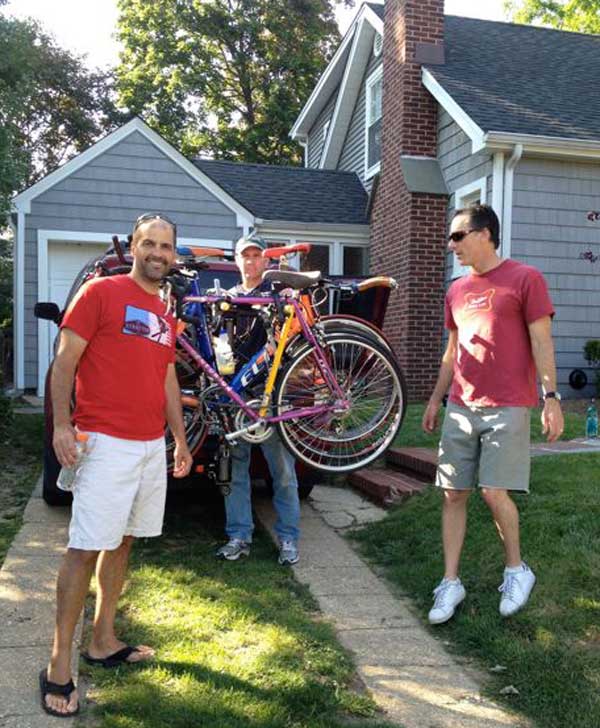 After the awards we went to Granny’s and packed up, heading north to ol Manhattan once more.

It was another awesome weekend!!! Mike, congrats and welcome to the addiction known as triathlon.