Swimming in a pool is boring. Swimming in the ocean is fun and adventurous! Pools don’t have sharks.

Doug and I set off on the subway around 10AM putting us on Brighton Beach at 11. Slightly later than we wanted but we had a late start as Abbe made us (the best) scrambled eggs. 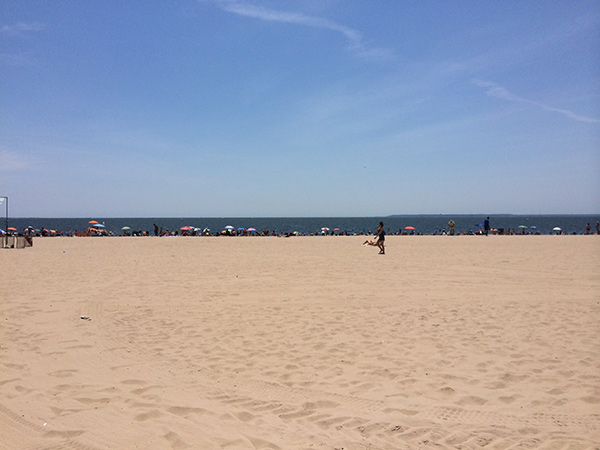 The beach was full of  ‘beach-goers’ sunning themselves and doing normal ‘beachy’ things. We had numerous people openly staring at us when we donned our sleeveless wetsuits. Personally, I think when triathletes are in wetsuits they look kind of like superheros, so I just imagined we had to go fight some crime out on the open water. Have no fear civilians!

Wetsuits were definitely needed on this day. I would say the water was in the mid 60s. Even so, one can always find some crazy ass kid, half purple, sloshing around loving life.

Due to the massive jetties along the shore, we had to swim straight out a good 200 meters. Once there, bobbing around, Doug and I made a plan of regrouping as we passed each jetty.

My form was spot on and I was having a blast. I had zero fear which is a nice feeling, especially remembering my fear of open water not so many years ago. As we got to the first jetty we noted how the chop was picking up. “Yo Bakes, I feel like I’m in a washing machine out here!” No doubt, but it was a nice challenge.

We pressed on, this time getting huge waves in our face. It was awesome! Every time we hit  a jetty we popped up and had a conference. After the 4th one we decided to turn back. It had taken us 22 minutes to get out there, but I knew that the return trip would not be so easy.

We were getting beat up real bad going back! I was getting smashed in the face every other stroke by big swells and we were hardly making progress. There were even a few moments when Doug (swimming to my left on the inside) was about 6 feet below me!

My form quickly fell apart and I tried to keep my mental strength in check. Doug was slightly ahead of me now and at times I couldn’t even see him due to the swells. We did regroup every 10 or 15 minutes though just to make sure we were good.

Finally, we got back to our starting point. It had taken us 44 minutes to return! Double the time! We high fived and made our way to our gear. What a swim workout. Even though it was challenging, I would take that over a pool any day. What better way to train for a triathlon?!

We (of course) found a cool Russian bar to grab a few beers, watch World Cup, and feast on food that we needed.

Big ups to a lot of the Gotham City Runners too. We had a killer track workout Thursday that seemed to propel a lot of them to PR’s during this weekends race!