As the 3 o’clock hour approached at work, I changed out of my suit and into civilian attire. I bounded down into the subway heading toward Penn and blending in with the masses already commuting home.

Abbe and I met at our normal spot, the ‘Secret Place to Wait for the Train’ that we had discovered a few years ago. We were both very exited to get out of Manhattan for the weekend… our mini-vacation. Our train was called, we boarded and then departed right on schedule. We enjoyed a bottle of wine and a movie while we quietly cut through the afternoon landscape.

The D.C. Metro has quite a few flaws, one of them is that in order to exit a metro station you need to re-enter the metro card you originally used in the turnstile. If for some reason you do not have enough money on the card, you cannot leave. You are trapped in the subterranean abyss forever, roaming aimlessly station to station. Or, in my case, fueled with anger you hop the turnstile like a (smooth) criminal.

Once we surfaced, our hosts for the weekend Amanda and Alex met us and lead us to dinner at Lavagna. The race was the following morning so we fueled with pasta and of course, red wine. This race fit in snugly  to our Paris Marathon training plans. We were to run the race at marathon goal pace and not ‘race’ it per se. This meant that we were mentally a bit more relaxed. Once I found out that Alex was also a ‘watch guy’ we proceeded to highjack the conversation splitting the table in two. All of us were in bed around 11, dreaming of a rainy, windy race morning.

I decided to wake up with 15 minutes to spare (before we had to leave for the race). Abs and Amanda had been up for an hour already having breakfast, which I opted out of. I sipped some much needed coffee before Abbe and I headed out for our 2 mile warm up to the Start. It was 40 degrees and rainy but we were unfazed.

Nearing the Capitol and feeling slightly goofy I got into my commentator voice and started with, “We find ourselves in the Nation’s capital, home to freedom and the American way. Where bills become…” “Chris, not now!” from an Abbe who was not feeling my improv. Our timing was actually perfect. We jumped into our corrals and immediately started the race! I would later find out that although it looked like I was in corral 1, they had already released two corrals so this was technically corral 3. A minor setback.

The first few miles were spent navigating through runners and trying to get my pace up to 6:25. At the only out-and-back on the course, which happened to be mile 3 I finally hit my pace mark. I also saw Abs on the other side and gave a shout.

Miles 4 to 6 are spent in Rock Creek Park. It was wooded and quite a nice place to run. We wouldn’t notice it until the Finish, but by now we were soaked through from the rain. There happens to be only one really nasty hill on this course. It is at mile 6 as you are leaving Rock Creek Park, it’s a doozy. The reason it poses such a challenge is due to the fact that for the first 5.5 miles you are running on flat terrain then, out of nowhere from around a bend, you hit this hill like it’s a wall. The beauty of it all was that there were posters of fallen military along with people lining the entire hill holding giant American flags. They were on the course at times, so if you were hugging the turns tight (as I was) you ran through the flags. It was touching and very epic.

Back on the streets of our Nation’s capital, I kept plodding along at a 6:30ish pace. My legs were starting to feel the miles. One of my mantras is, “Just give it all you’ve got on this day.” I tried to hold true to the statement and just started clicking miles off one-by-one. 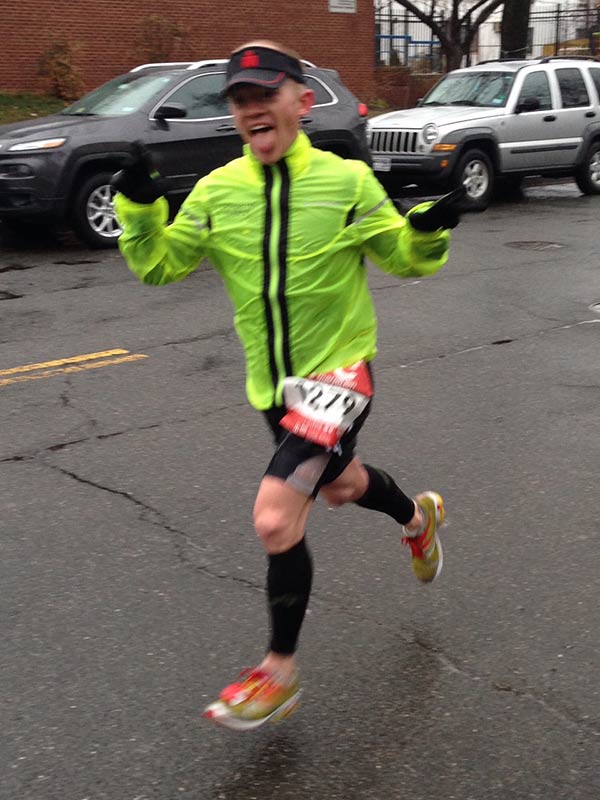 Passing by Mile 11 I got to see Amanda and Alex cheering. It was raining pretty hard by now and those last 2 miles couldn’t come soon enough. 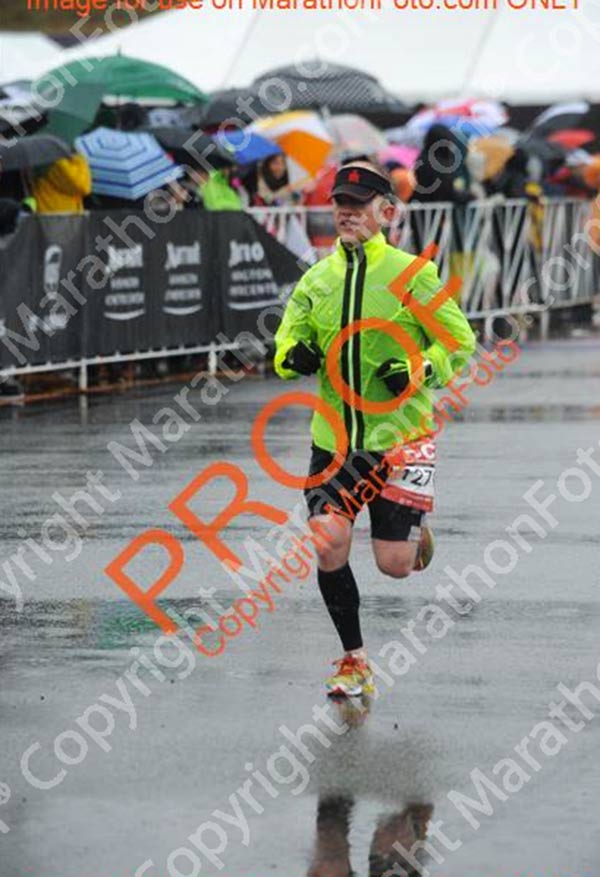 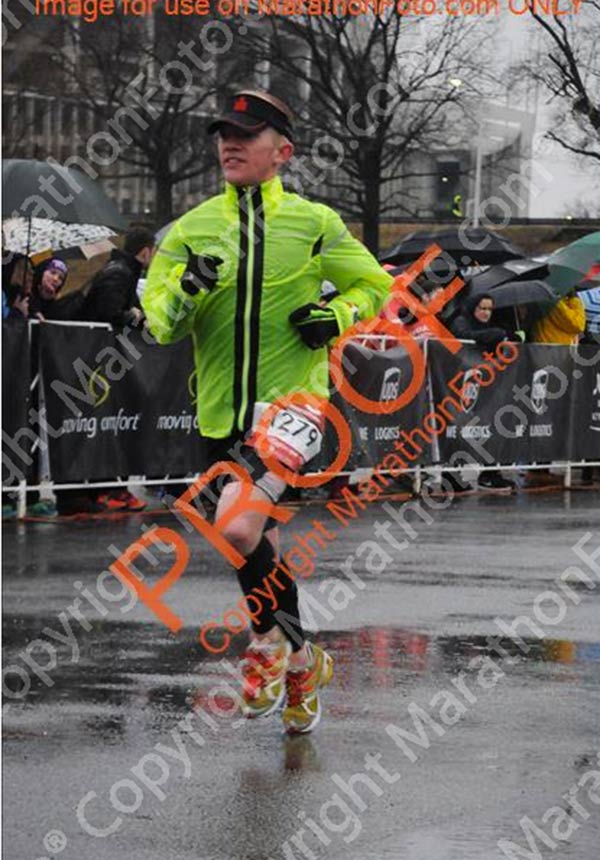 I was slightly off from my projected 6:25, but I was satisfied.

Standing in the middle of a large uncovered parking lot my body temperature dropped rapidly. I went from a sweaty “Wow I just ran a great race, boy am I thirsty.” to “Get me the hell out of here and into a hot bath.” Looking out across the barren wasteland of a parking lot, I could make out off in the distance a glimmer of hope. Was it a mirage? Am I seeing things? I walked toward the light and as I got closer my instincts had proven correct, it was indeed a covered beer tent.

I took shelter and honestly really didn’t want a beer, mainly because my hands were numb. Not long after after my arrival Abbe showed up, also cold and wet. As soon as Amanda, Alex, Jason, Amber and Erik showed up we bolted out of there making our way to the Metro.

After showering we all headed to lunch for some much needed refueling. Later that day we went to Gregor and Jenny’s place (neighbors) as they were having a St. Patrick’s Day party! Gregor made one of the best Bloody Mary’s I had ever had, and I am picky. That night we all met back up and went out to eat. We were celebrating the race, but also the fact that Jason was now officially a Doctor! Our friends Jordan (another Doctor) and Katie (who PR’d in the race) along with Bradley and Christin also joined in. Drink of choice for the evening… Old Fashioned(s).

It was a helluva day for sure. Big thanks to our hosts Amanda and Alex!

In conclusion I submit this Runner’s Anecdote.

Sunday morning while having coffee Abbe decided to check the race results to see if perhaps I had won my age group. Personally, I thought there was no way based on my time and the volume of runners (15,000). A round of excitement and laughter erupted from Abbe’s side of the room. “Honey, it says here that you ran a 1:10 and came in 7th overall!” I started to question my Garmin. We all started trying to figure out how this could have happened. There were no other Christopher Bakers (obviously), no other Bib Number mix ups and there wasn’t even someone who ran my supposed 1:26:35 time in place of me. Did I run a 1:10? I mean, you get to a point in a run where your mind is on another plane…

In the meantime why not post the results to social media, right? What is wrong with the image below showing my final splits?

Not only did I run a fantastic Olympic level Half Marathon, I also shattered the world record for the mile three miles in a row in my last split. Go me!

After writing a letter to the race organizers, they adjusted my time to reflect that on my Garmin so that the true 7th Place winner can bask in their glory. No trophy this time Baker…