Since returning from my youngest brother’s 4 day bachelor party Coach S has me in a sort of ‘Hell Week’ (or 2) to get me ramped back up. Ironman is in 15 days. I am actually more excited than nervous for it. Do you know why? Home turf bitches!

Speaking of home turf, I took a break Wednesday night to hang with my coworkers and one of them led us to this ultra unknown waterfront bar! It is in Long Island City at the end of a very industrial and desolate stretch of road. As you come to the end of the road, to the left is an auto shop. Next to it is a fence with an opening and a hand made wooden sign that says something like ‘Annabelle’s Yacht Club and Grill.’ Upon entering you find yourself in an open area with 10 picnic tables lining a most scenic waterfront view of mighty Manhattan. The bar is just a window where you order bottled beer or white wine that evidently tastes like apple juice. 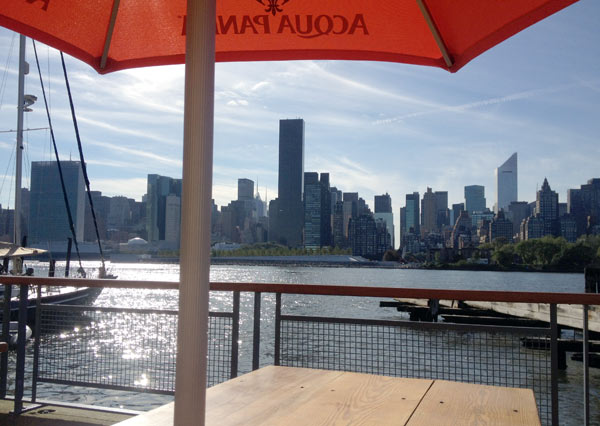 Notice how convenient it was to park my Yacht nearby. Disclaimer: Beyond Defeat does not condone drinking and sailing.

The place is definitely rogue ops, but it’s got quite a view. I was told by my coworker that it is a Bulgarian run bar, hence the Bulgarian sausages and Chevapi being served on the lone grill. I totally recommend checking this place out for a spectacular NYC sunset.

Back to ‘Hell Week’… I shaved 4 minutes off my 1 Mile swim time! Wooo hoo! Thanks Jim (from ‘Dad Posse’) for teaching me a new technique!

Saturday morning was the annual Brooklyn Bridge Swim. Over 400 participants (NYC Swim’s largest event) swim under the Brooklyn Bridge to the shores of Brooklyn! It is only 0.7 miles as well, which is in my opinion, an easy swim. Who wouldn’t want to do that?

As Friday approached it was clear that the weather would be questionable for the swim. They do have serious safety regulations and if the current is too strong they have the option of canceling the event.

Rain, rain and more rain. All day. It was chilly as well. Now, in my mind, I do these singular swim events for the love of it, for fun. Unlike running or a triathlon, I know I have no chance of placing or winning for that matter. The lead swimmers in these events are animals, well actually, very graceful animals. My point is, if the weather was bad, I could easily bail on the swim.

After a work event around 11PM Friday night I called my swim coach and friend, Todd, who was doing the swim with me the next morning. He suggested I come stay at he and his wife Ila’s place so we could leave as a team the next day. It was way late and I needed rest so I said I would meet them the next day at the South Street Seaport. This would make it easier for me to bail if I wanted to.

Wow did I want to. Now… I know a lot of my friends are like “oh Baker has so much energy he must never sleep or slow down.’ False… and on this particular grey morning I was really enjoying laying in bed dozing. In my mind I had already given in to not swimming, sleeping was now the follow up event.

8AM: Text from Todd “Looks like this thing is on.”

My response ” Cool. Im not really feelin it though.”

Backtrack… Todd had broken his collar bone in 5 million places the day after we swam the Park to Park 2 Miler and had been training and getting back into action specifically for this swim.

“Bakes. Dude. So here’s my deal. I’ve been training for this swim ever since I got back into physical therapy. I NEED to conquer this thing. “

Me, “I hear you! Okay cool, Ill get my camera and take pictures of you rockin it out!”

“Ok, Ill be at the Seaport in twenty.”

I would later thank Todd for this pseudo pep talk. Sometimes you just need a little kick in the ass.

Arriving at the Seaport (or just North of it) I could see a few hundred swimmers gearing up. It was on. The buoys were all in place along the bridge and people were so excited. I think I have mentioned before, the swim crew is all fun and good vibes.

I met Todd and we geared up. We wore wetsuits but probably didnt need them. I personally like them because its the closest Ive ever felt to being a superhero or something. The organizer gave us a pep talk and our instructions, then we lined up.

I was number 53 which meant the second heat.

As I stepped out onto the natural beach with driftwood and brown sand I had flashbacks to another time. I am a history buff and this was like candy to me. This beach was amazing and as I stood knee deep, barefoot in the water my feet digging into the sand and shells, I could only think of early settlers fishing right off of this beach. It is something I will never forget.

The horn went off and into the water we went. It felt great as usual. People always ask me about the cleanliness of the water. Earth is a very resilient creature, and its moving bodies of water are constantly adjusting themselves pushing out trash and debris. The water, although dark and ominous, had a taste similar to that of any ocean I have swam in.

As I approached the first pylon my goggles started acting up and the right eye was taking in water. This is such a pain and really hinders getting into the swim zone. As I fixed my goggles a gal I made friends with on the shore (because of my odd mirrored open water goggles, hence her nickname for me) said “Hey Goggles! How ya doing over there?” Like I said, everyone is way cool at these things. “Im good, but my goggles are acting up. How are you doing?” She smiled and said “Slow and steady baby, finding my rhythm. Sorry about the goggles, see you in Brooklyn.”

I moved ahead, but not before looking up at the bottom of the Brooklyn Bridge and thinking “Wow, what a rare view of a majestic creature.” Every few minutes I got in the habit of quickly draining my right eye goggle, making the best of the situation. I was actually moving at a pretty good pace too, my stroke had indeed improved since my Triathlon.

Another product of the Triathlon is that, for the first time I was totally comfortable with other people swimming over me and all around me. Someone even kind of tickled my foot once and I almost lost it.

As we approached the end, I thought to myself, wow, what a good time and great way to start a Saturday. Jumping up onto the dock I ripped my goggles off my face, betrayed by them. I have already began to shop for a replacement pair.

At the hose down station Todd was like 4 people in front of me, we did a celebratory fist pound, we had done it again!

On a sad note… a man, Richard Harley, died from a heart attack mid race. He was 59 years old and an avid swimmer.

Todd had agreed to coach me and train me in my swimming starting January. My goal of course, being Triathlons. During all this training Todd discovered NYC Swim, a group that organizes open water swims in the waters surrounding Manhattan. He decided we need to do a few of these swims, and he being my coach, I couldn’t refuse.

Our first race (and our first open water swim) was The Great Hudson River Swim, a 1.3 mile race from Christopher Street to the Battery Park Marina.

The night before Todd, Ila, and I went out for pasta and some wine, heading home early and getting to sleep by 11.

It was beautiful out the next day, highs reaching 70 degrees. The water temperature however, was a mere 60 degrees, very cold. We arrived on-time and checked in, getting our swim caps, tracking chips, and race numbers. We lounged in the grass until it was time to swim. We lined up according to our numbers and one by one jumped in the soup staying behind a set of start buoys. The minute I hit the water my hands and feet went numb (Todd and I had on wetsuits) and we treaded water for ten minutes until the first heat sounded.

As we set off I let the faster swimmers take off, as I was a rookie at this point and wasn’t sure of how I was going to do. Immediately I was having trouble. It was the cold, every time I put my face in the water to begin my form, it was like plunging into and ice bucket. I did some breast stroke to get moving and was really not happy with my performance. In fact, I was ready to quit. It was then I thought about my marathon run and everything leading up to that point. I couldn’t quit, so I plunged in and started doing 2 strokes per breath patterns.

Taking a left out past the first buoy I was now in the current and heart of the Hudson River (aka The North River up until about 1950). I was doing just fine at this point and was getting comfortable with my pace, mostly I think because my body warmed up. The crazy thing about the whole thing is that at no point was I even concerned with drowning. 6 months ago I would have been freaking out.

Pressing onward I really got going. I was back to my 3 strokes per breath routine and moving. At the marina entrance I nearly missed the left turn and could have been swept out into the sea! I had a few swimmers by me making the last 50 yards of the swim which fired me up to really go. We climbed the ladder and were on dry land! My legs were very wobbly. My friends and family were yelling my way and snapped a bunch of photos.

They hosed us off on the dock and I made my way to find Todd to high five him. We had done our first open water swim and it was a great accomplishment.