Right now, if I had one wish it would be ‘Speedy Swimmer.’ Thank you.

The ‘Aquathlon Stars and Stripes’ is a 1.5K swim followed by a 5K run and is put on by NYC Swim, the same people who organize races like The Great Hudson River Swim. It is one week before the NYC Triathlon and is marketed as a training race. Since I’m doing the Tri (and I actually enjoy swimming the mighty Hudson) I figured I would give it a go.

Erika was racing the NYRR Dash and Splash 10K at the same time so I prepared us a race-worthy dinner the night before. I whipped up some homemade tomato sauce over linguine… easy, simple, delicious, and totally energizing.

Woke up at 7AM sharp and got the Cafe Bustelo going. Jim from ‘Dad Posse’ met me in front of my apartment at 8 and we biked down to 56th street and the West Side. Todd met us in line and we all got checked in and organized our respective run transition areas. Transition is like 1000 times easier without bikes to maneuver around.

Once we were all situated we started the walk up to 72nd Street which is where the swim begins.

We chilled in the grass for awhile then lined up in race order to take the plunge into the river. One by one we filed into the water. Once NYC Swim had everyone in a herd before the first buoy, they would sound the horn.

I adjusted my goggles and was bobbing around on my back when the countdown started… 3. 2. 1. GO! 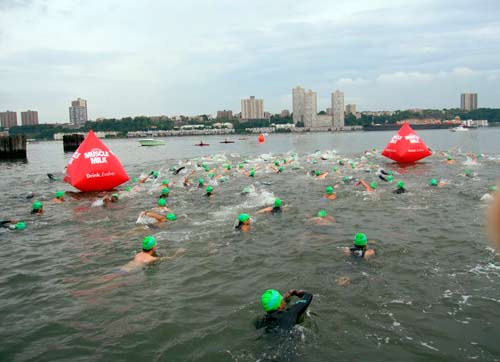 Mayhem. As anyone who has ever done an open water race will tell you, it’s mayhem. After doing quite a bunch of these and now knowing what to expect it really doesn’t phase me. Its kinda like being stuck in a weird traffic jam, you know, there is a merge up ahead and everyone is cutting in.

Once we hit the first buoy and took a left heading south, it opened up and I got into my rhythm. Last Wednesday my friend Brandon (who is a very good swimmer) gave me a number of useful tips about my form. This was my first attempt at using this knowledge. Did it help? I sure think so, I felt like I was pushing through the water faster and a lot more steady. Would I win the swim portion of the race or even get close? No way Jose.

One of the things I AM good at in the swim is ‘spotting.’ I never really get off course and am always heading in a straight line.

It’s funny, in my head I’m all calm doing my swim UNTIL I get close to the end. At that point I might as well already be on he run because that’s where my mind is. I do like a once over on my body.

I left the water and booked it up to my T1 area. Or just T area, because there is only 1 I suppose. Got changed and was running full blast out onto the run stage.

Out on the West Side bike path heading north I made it my mission to pass as many people as I could. It hurt bad but after the 1st mile everything fell into place.

I passed Todd and cheered him on, then saw Jim coming at me from the turn around. We high fived.

As I hit the turn around point I passed this tall guy (right, Baker, everyone is tall to you) ANYWAY, he hung onto my heels shortly after and was tracking me. Sure enough he made his move 1 Mile to go. I held onto his heels the rest of the race. As we got close to the end I passed Jim and yelled out, then we all booked it. I couldn’t catch the guy because the finish was on a half circle! How are you supposed to spring on a turn like that!

After the race he (tall fast guy) came up and thanked me for passing him as it got him fired up. No problem, “nice pace!” I said. His name was Ran (pronounced Ron) ironically, nice guy, great competitor.

I bumped into Regina who participated in the swim portion of the race. We both agreed that it was a hard swim, especially at the end when the rollers came in. She is also doing the NYC Tri next Sunday. Good luck Regina, see you out there.

I also saw Anthony DiGangi, who organizes the Fire Island 5K and was also racing the Aquathlon.

Finally, I ran into my friend Katherine who also just did the swim because “She doesn’t run.” Someday we will get you out there Katherine! It’s fun, trust me.

Jim, Todd and I got packed up. Jim and I then rode our bikes back to the Upper East side while Todd headed south. Once again, a great race.

The following day a big group of us rode to Nyack! It was a blast. What a weekend! 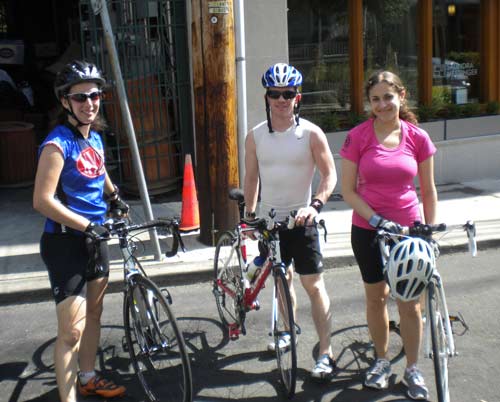 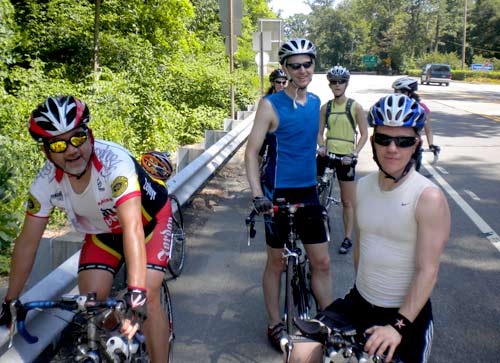