As our flight left the ground we banked hard right, giving us a full view of the majestic New York City skyline, my home. It would be 5 days until I would see her again. We were headed to Greece by way of Rome on a matter of security… protect two U.S. citizens getting married abroad.

Operative ‘A’ (posing as my fiancée) was already getting cozy and making an attempt to sleep. I happen to enjoy longer flights, sipping my red wine and imagining I am living in the romantic era of air travel. ‘Mother’ had given me a few pills for the trip and after my pasta meal (we were headed to Rome after all) I took one and promptly fell into a deep slumber. 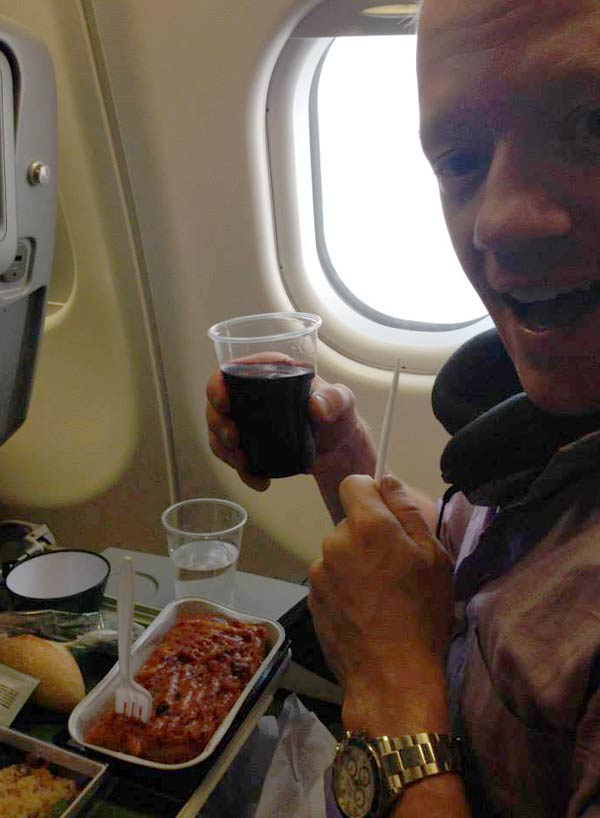 In Rome I had one concern, coffee. Abbe and I found a place to sit while we oriented ourselves. What we were not ready for was a second passport checkpoint. “Play it cool Abs.” As we approached, the Italian behind the glass paused for a moment, giving me a glance like we had known each other. ‘Guastavino?’ I thought. Without so much as even looking at the passports he stamped them.

Our connection to Greece went off without a hitch and we made it through the Athens airport avoiding customs.

In Athens it was just after lunchtime and we desperately needed some food to recharge. We met our guides ‘Linda’ and ‘Dave,’ both posing as American Tourists, at an outdoor cafe. We quickly ate and then departed as we had a three hour drive to our final destination, the western mountains on the Peloponnese Peninsula.

Athens isn’t much to look at (aside from the mighty Acropolis of course) but as you cross over onto the peninsula things get dramatically beautiful. The mountains rise up across the Gulf of Corinth and the sea turns a deep blue. We then headed due south into the mountains, making our way to the small town of Kalavryta. We were flying along up the mountains, deadly drop offs to our right. Luckily for us, Dave happens to be pretty skilled behind the wheel and he navigated the hairpin turns with ease. If anyone was trying to follow us into the mountain pass, they would have had a hard time keeping up. 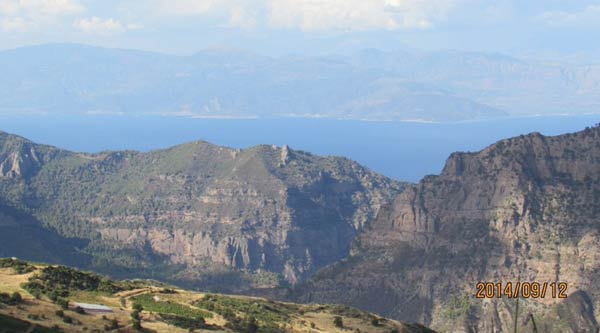 At the highest point, as we banked left along a sharp bend a mountain range rose ahead lined with windmills. It is something I will never forget.

Approaching the town of Kalavryta one is reminded of a small Swiss village surrounded by mountains. We found our hotel as well as our American counterparts. Christin, one of the two U.S. citizens getting married, greeted us with open arms. She and her family happen to be from this town. Unbeknownst to both her and her fiancée Bradley, we were hired to make sure they were safe during the wedding. 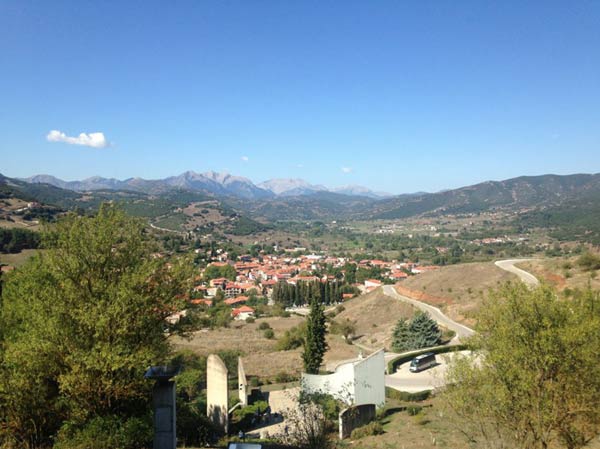 You see, the Greeks in this area love all kinds of meat, especially encased meat like lamb sausages. A few of them had gotten word of the wedding and had heard tales of Bradley’s love of encased meats, often giving him the ‘meat sweats.’ Fearing for their livestock and local economy, they were worried that he would ravenously consume everything meaty. The American had to be stopped.

I waited in the hotel bar for Abbe to finish getting ready for dinner. We had an engagement at Christin’s Aunt’s home. While sipping my espresso I saw Bradley, gave him a big hug and chatted about the weekend’s festivities. Then, I spotted ‘the tattooed man,’ one of our allies from back home. We had never met but knew the key code words to verify our identity.

He approached as I said, “Beautiful watch.” He smiled in his sunglasses and said back, “Indeed, it is a Rolex. I hear you know the brand well.” The connection had been made. He introduced himself as George and as it turns out, was the father of the bride. He told me that my code name for the duration of our stay would be ‘Christos.’ 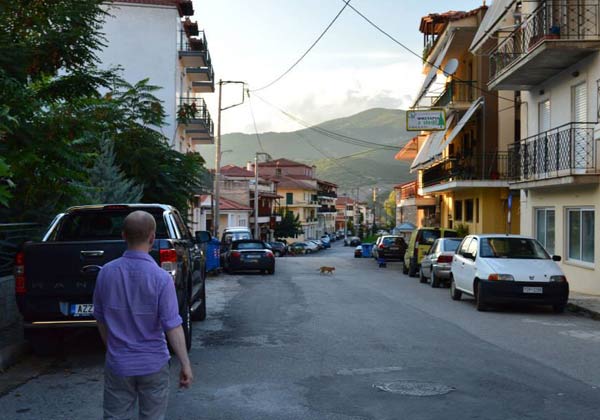 That night we all casually strolled through the town center to the home of Christin’s Aunt. We were treated to many home cooked and delicious treats. She even makes her own wine, which was quite a popular item over the course of the night. We met countless family members who were all some of the most heartwarming and welcoming people I have ever met. It seemed like having to protect Christin and Bradley here not needed. 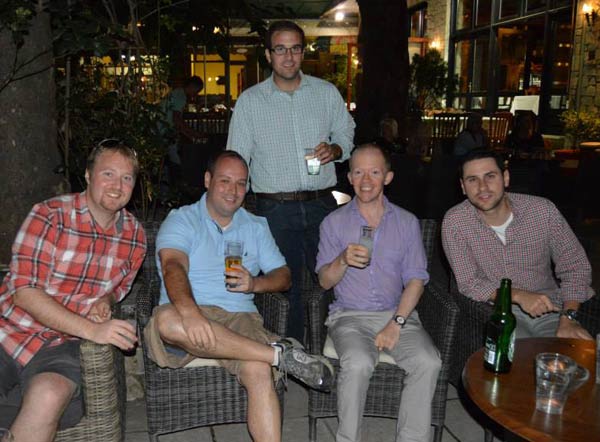 The next morning I took Abbe on a run into the mountains to survey the surrounding lands. I have never been to a place so stunningly gorgeous. For the first time in as long as I can remember, I was at peace and very relaxed. Abbe was not pleased with me at all for taking her on a run straight up a mountain, but I was enjoying the scenic vistas. 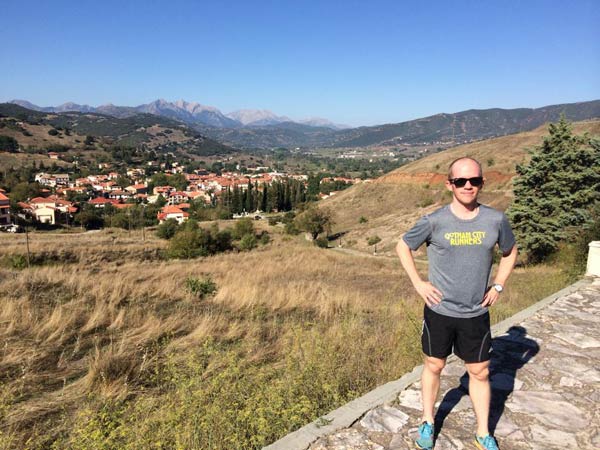 Later, we met up with our American counterparts and toured the town, stopping to have an outdoor lunch at a local establishment. It was there that I consumed quite possibly the best Greek Salad I have ever had. I later found out that everyone there grows their own vegetables on small farms they have. 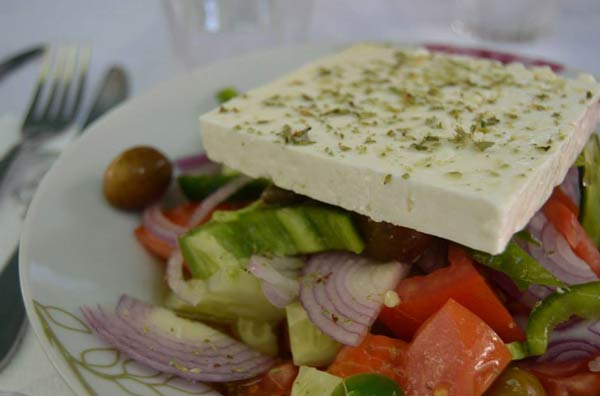 In Greece meals take time. I enjoy this a lot since I love to eat. We basked in the quiet midday rays chatting when from down the block Bradley approached. I watched to make sure he wasn’t followed and all seemed well. He was looking for some food to hold him over until his wedding.

A few hours later we found ourselves driving deeper into the Greek countryside toward an even smaller town called Priolithos. It took us 15 minutes for our caravan to get there. We were all congregated on the side of the road as church bells rang out across the valley from the mountains. I looked up onto the hillside at what I thought was a church and glancing at George he nodded, “That’s where we are going.” Only 4-wheel drive vehicles would be able to make it up the steep switchback. That in mind, a few of us set out on foot. I figured, if there were any dangerous ambushes it was better for us to get up there first to take them out. 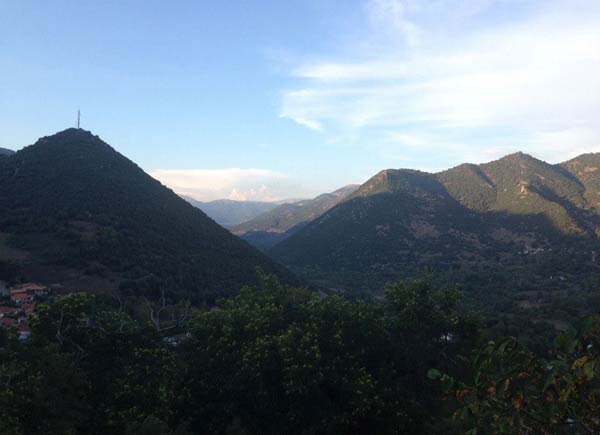 It was slow moving, steep and as my American associate ‘Tim’ would say, “Freaking hot as hell.” We were cautious around every bend and found no real trouble aside from our footing. The cars now started to trickle up the pathway.

Once everyone had assembled at the top, Christin hopped onto her Uncle’s donkey and was escorted up to the church by her father and some musicians. It was pretty amazing. Inside the Greek Church was performed a traditional Greek ceremony. I had never witnessed this before and so was very attentive, even though I could understand nothing. My eyes were also peeled, looking for any potential assassins tempted to stop the event. All seemed clear and the wedding concluded with an eruption of clapping and cheer!

Back outside, we all paraded down the hillside, anxious to get to the reception back in Kalavyrta.

The event started as a seated dinner. Abbe sat next to me and one of our new friends from Greece, Theodora, sat across the table. She was an excellent host, introducing us to everyone and translating things we could not decipher.

Once the wedding party had arrived, the food started coming out. The family had grown, harvested and made everything and so fresh, doesn’t even begin to describe the tastiness of our food. Greek salad, pasticcio, spanakopita and lots of wine made up the first half of the meal. Next, as if we could eat more, came chicken and the lamb from Christin’s Uncle’s farm. Never have I had better lamb then we had that night. I was so full, and yet, I needed to eat more.

We started dancing in a traditional Greek dance known as the Kalamatianos, holding hands and moving in a circle. Everyone was doing it! At times we would leave the wedding venue and dance down the streets of the town, returning through a back door.

I took a break because Theodora was nice enough to track down an espresso for me.

The dancing continued and slowly people started to retire. I just kept at it. I was having a very fun time and before I knew it the time was 3:30AM. Bradley and Christin made the call to shut down the party as they were tired.

A group of us strolled up the quiet moonlit street to our hotel, happy as could be.

The following day our guide Dave woke us up. We had to leave, there was another job out on the island of Mykonos and we were already late. Not knowing the details of this new assignment, we said goodbye to all of our new friends and departed. The wedding had gone off without a hitch, Bradley was now officially Greek (now under Greek protection) and our work here was now over.

From Greece with Love – Christos