My weekend plans changed quite a bit. As I sat drinking my coffee I realized that the Knickerbocker 60K was going down and I had some crew racing it. Hmmm… I think I’ll go run and support my peeps!

As I set off in the opposite direction of all the Knickerbocker folks I flashed back to my race and how fun (and painful it was).

I saw friend Jim first, who seemed to be doing great! Then, I saw Kevin and Michael from Front Runners, looking strong. Next up, Sebastien, who was on a mission flying by. I said to myself, “I bet he is trying to win this thing.”

Cruising across the 103 Trans I saw Paddy coming my way. I flipped around and started running with him. He was on lap 5 of 9 and doing great. We chatted about running and just kinda enjoyed the day. As a runner, and being in Paddy’s shoes a few times, I tried to be the best pace setter a guy could be. First off, I tried to be the one doing most of the talking.  Second, I didn’t do TOO much talking and kept my pace as close to his as possible. I think I did a good job.

After 2 miles I bid him farewell and flipped back around. I saw Robin here and had a brief chat with her before she took off.

I did a full loop of the Park after this and saw Kevin, Michael, Paddy, Sebastien, and Jim a few more times. It was an amazing fall day for a run and I was kinda sad I didn’t sign up to race this one!

This post was really just a lead in for some ‘Big Ups’ and ‘Godspeeds,’ so here we go.

Sebastien! You won the damn thing! Congrats! We first met during the 2009 Knickerbocker  (pic of us hangin after below) and he came in 2nd then! 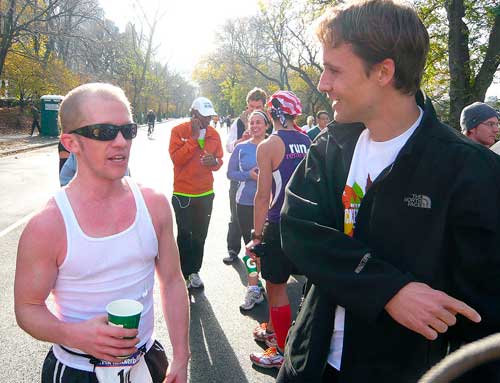 Ed! You have your first marathon to run tomorrow in Philly, kick some ass!

Kelly! I sense a PR tomorrow in Philly.

Philly peeps, godspeed. Have a great race! I hear you have to have purple mohawks to get into this thing?!

Ironman Arizona peeps! Jen and Audra, please have mercy on your competitors. You two are a force to be reckoned with. Kill it and represent Kompetitive Edge in style. Arizona was my first Ironman so it has a special place in my heart.

Brooklyn Marathoners! Represent! Cooper Trooper you better own it!

It makes me terribly proud to know so many outstanding athletes.

« A Thanksgiving thought
How to Kill a NYC Cockroach »