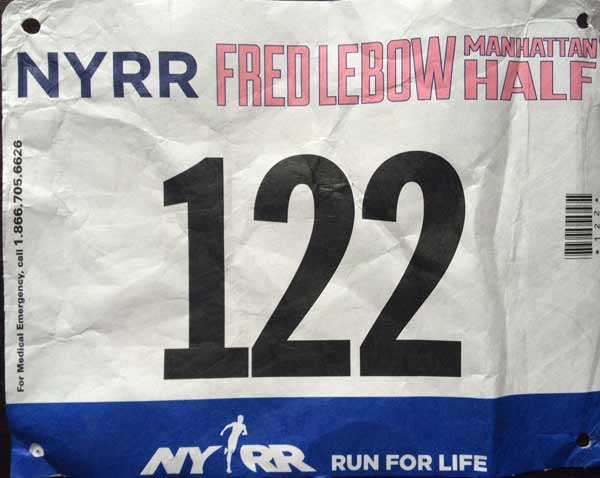 I normally don’t like to pay money to run around my backyard, but since my Aunt Marge (in charge), cousin Cat and Charla were coming in for the race, I was game.

They all converged on my apartment around 6:30AM. We had some coffee, formulated a game plan and were out the door by 7. They got to meet the Gotham City Runner crew, those that were racing anyway, at the start. The weather was great. During my warm up this gal screams “BAKER!” and nearly gave me a heart attack. It was my friend Rachel, also running the race. Right after that I ran into Abbe who was just running around the Park to get in her miles.

As I was stretching before heading to my corral, my old running friend Rowland popped up! We became friends because we run the exact same pace. Seriously people. During 3 of the 4 NYC Marathons I have run, around mile 3 I always look over and there he is, hitting the same numbers. This even happened randomly in Boston 2012.

He and one of his friends (I think he said his name was Doug) and I entered our extremely packed Blue Corral a few minutes from start time. I had run 8 miles the day before (and have been running 6 days a week) and wasn’t really sure how I wanted to handle this race. While chatting with Rowland he said, “I would be happy with anything under 1:30.” Hmmmm… I thought. “Yea me too.” And with that we were off. It took us 20-30 seconds just to hit the start mat, that’s how packed it was!

My legs felt pretty heavy, so I just kept a pace I liked. As we rounded the bottom of the Park things were still pretty congested. It wasn’t until we were up past Cat Hill that it opened a bit. I looked to my right and there was Rowland and Doug. For the rest of the race, the three of us acted as team, running in V Formation. We ramped our pace from 7:15 to around a 6:40 at times, passing people like F-15s.

At Engineer’s Gate I saw Uncle John cheering and gave him a shout.

Then, barreling down Harlem Hill we saw Abbe coming the other way and gave a shout. I looked over at the guys and said, “That’s the Mrs.” At the top of Harlem Hill we were kind of murmuring how we were disappointed we had to come back around and run it again.

We also saw Craig who was snapping photos for GCR!

I had no watch on, so I was just running to run. It was great. As we hit the 6 mile mark back at the start the clock read 40:xx.

By now my heavy legs no longer felt heavy. This whole running 6 days a week thing has been strange and exciting for me. I have only ever run 3 days a week with my highest mileage being in the 35 mile range. I would be at 45 miles this week after completing the Half and my legs have never felt better (overall, not in current race time). There hasn’t even been the slightest hint of pain or injury. Enough! Back to the race.

Miles 8, 9 and 10 happened to go by pretty quickly. The sun was out and it was a beautiful day! We were taking turns leading and following each other and by now aside from a cheer when we ascended a hill, there was zero talking. I was having a blast.

At the last mile we all fell apart a bit. I was feeling really good so I started pulling away. I had 7 or 8 minutes left to get in under 1:30 and my mind was spinning. By now we were catching up with the back of the race so there was a lot of ‘bobbin and weavin’ going on. I ended up finishing in 1:28 and change.

I found Craig, who was now at the finish taking pictures and hung with him before setting out to find my family. Uncle John, cousin Gillian, Dave and Lindsey were all cheering about 100 meters from the finish. Right as I found them Aunt Margie cruised by on her way to a sub 2 finish, followed by Cat! This was Cat’s first Half Marathon and I was very proud of her for not only completing the course, but also finishing in a very respectable time! Shortly after Dave’s wife Charla finished. That was our cue to head back to my place where Abbe was making a breakfast pizza. Whaaaat? Yes, pizza for breakfast, try it sometime.

After showering we all went down to Kinsale to celebrate. It was a great finish to the week. Congrats to all!