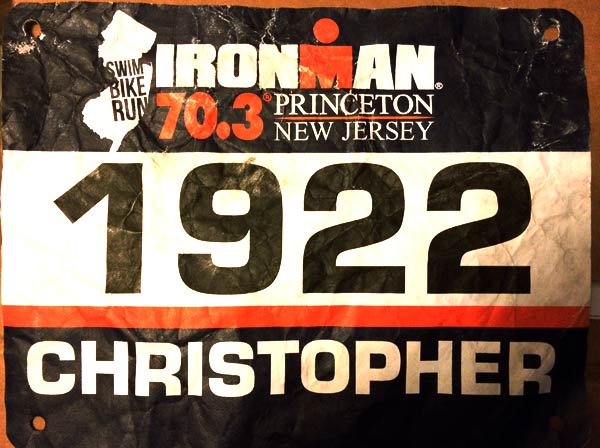 Princeton 70.3 was to be my ‘finale’ of the season. Due to getting married, my fianceé (Abbe) said I could not race a full Ironman this year. It would prove to be an exciting race for many reasons. I was racing it with my friend Doug, this being his second Half Ironman. Joe and Amy were racing it under my coaching guidance. Finally, my friend Susan was attempting her first Half Ironman and I was ‘kind of’ coaching her on things triathlon. New York City was attacking Princeton by way of triathlon!

Doug picked me up at 1 and were at check-in just before 3, much easier than Eagleman!

It was a giant field in a giant park. Overall, it was pretty unremarkable.

We checked into our hotel and linked up with Susan and Erik. We needed some carbs and downtown Princeton was the plan. It’s a very quaint town and we pulled into a small side street to park. As we got out this gal walking by smiled at me then doubled back. She had a Princeton sweatshirt on and a backpack, carrying some books, a student for sure. “Hey, I know you.” she says. “You’re that Ironman guy.” I smiled a bit and looked around at the gang who were looking back at me like, “Whaaaaaat?” “I mean, yea I race Ironmans but…” Then it hit me. On the flight I took from NYC to North Carolina for Abbe’s bridal shower she sat next to me on the plane and noticed my Ironman backpack. We chatted all things triathlon for half the flight! I mean, what are the odds of running into her again?

Bewildered at life per usual, we headed into Triumph Brewery to solve the mystery.

After a few pints, Amy and Dave found us and we headed to Teresa’s Cafe for dinner. I had already put our name in but we were an hour late. I don’t know what I said to her (as there was now a 2 hour wait) but she smiled and said, “As long as you are all here we can get you a seat.” Cool? Yes, very cool. The gods were with us on this one it had seemed.

After a scrumptious meal, we all retired to the hotels. Doug and I had another beer at the hotel bar and almost lured Susan in, but she wanted to sleep.

Awake at 5:45AM no problem and headed to the lobby with Doug. We grabbed some coffee and waited for Ames, Susan and Erik before departing. Doug grabbed a full bag o Hilton Honors cookies for us, which all of us would eat at some point before the race.

We rocked transition pretty quick. I had one major issue, I left my water bottles in the car. Holy smokes! I had like 10 minutes before transition was to close. I ran out to Erik who had the key then did a quick warm up in flip flops to the car. Pace: Light Speed per Mile. Doug forgot his swim cap so I saved his ass too!

Where the hell was Joe?!

It was a wave start and Doug and I were to start one hour after the Pros, our female pals 20 minutes after us… meaning, we had time to chill. Chill we did! It was overcast and breezy and not exactly warm. I’ll take it though. Eagleman in July was an oven of death.

As we were waiting I saw my friend Bill cruising to his start. We gave a shout, I would later see him on the run course for more back and forth banter.

The water, although unattractive, murky and smelly, was a great temperature. If that trash pit in Star Wars that the gang gets stuck in was clear of debris and 70 degrees it might be similar. No monsters either, we had no monsters in the murky lake.

I thought I was doing a great job on my swim. Perfect sighting, form was on par, but in the end I was almost exactly the same speed I was in Eagleman to the second. This prompted me to start creating many swim technique theories.

I will say one thing. I may not be fast, but I am now very experienced and ready for anything in the soup. Fear has left me.

I saw Erik (super awesome cheer squad all day) as I left the water. I was in and out of T1 in pretty good time and going pretty hard on the bike immediately.

I was not wearing any Garmin or any sort of device to show my time. It’s my new thing and it’s pretty fun, I recommend it. I just pedal as hard as I can and see where it takes me. It was going to take me on one of the best bike splits I have ever had.

The bike course was pretty dull. Lots of corn fields and lots of terrible potholes. I saw so many flat tires.

I saw Doug early on and we rode next to each other chatting having fun. Some guy rides by me with plenty of room and shakes his head (because we were double file) and I yelled, “Don’t you shake your head at me.”

I said ‘peace out’ to my friend and proceeded to chase jerk down. I did nothing unsportsmanlike, I simply passed him.

The rest of the course was pretty uneventful. I did however, get a flat tire with 7 miles to go during one of my best bike times ever. I was clocking 21MPH-22MPH average, just going to show you that you never know what to expect. I pulled over and a women came to my aid. We started whipping out tools when a guy pops over offering assistance, “I am a bike mechanic.” he says. Um, yea you can help!

As we are fixing my flat the guy looks up at me, then to the lady and says, “I know this guy.” Continuing to help with the flat, he smiles, “You and I were next to each other in transition at the Quassy Half Ironman in 2010. You were taping burritos to your bike. I remember you as ‘burrito man’!” I was freaking out. What a strange coincidence. I explained to him that I have since retired the burrito fuel, because my first Ironman Coach, Coach Sonja, showed me the way to a new kind of nutrition. After the tire change we all said goodbye and I headed out to finish the bike portion, semi-defeated, but still amped to get my run on. 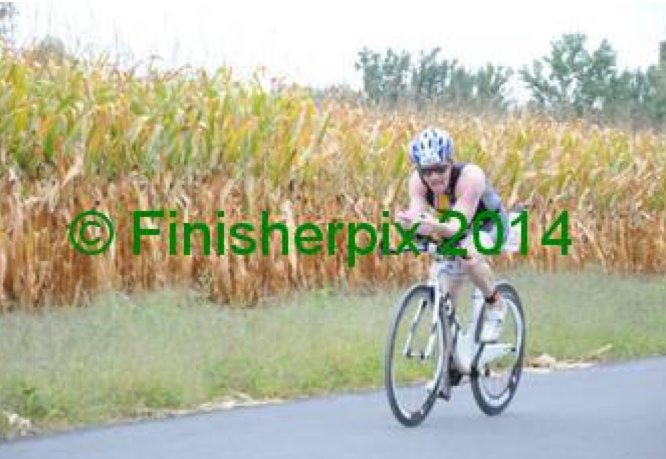 Riding along discombobulated I accidentally passed a guy as we turned, on his right. Shame on me, I guess. A course marshall (picture Mr. Magoo on the back of a motorcycle) gave me a yellow card. I tried to charm him, “But sir… I juuuust got a flat tire. C’mon. Give a guy a break.” No dice. Then, homeboy continued to flank me, watching my every move. My resentment toward him increased. I was in a holding pattern, losing time and upset that some jackass on a motorcycle was hawking an age grouper. Go track the pros man, I am not winning any cash money.

Finally, I arrived at the penalty tent where I served my 1:30 minute time as 2 guys argued whether I had to ‘stop and go’ or stay 2 minutes. Lovely.

Guess where you can’t get a penalty? Running! (I mean, unless you did something really nuts.)

It was a good day for running, if we hadn’t already swam and biked, but I still set it off pretty good. The first mile or two I was jetting past people, but I could feel internally that it wasn’t going to be too epic. I didn’t mind as this was a season closer and I was out to have fun and see how two of my coached athletes (and Susan) would do.

The run course (as well as the bike course) kind of sucked. It was so tight on miles 2-5 that there were runners coming at you and only room for 2 people across. I saw Doug at mile 4 coming at me and he was quite surprised that he was now in front of me. “Bakes! Flat tire?! What happened?!”

I felt okay until mile 6. Then, as things have started to go with me, everything clicked in. Speed increased, I felt perfectly normal, and my turnover rate got faster. Why? No idea.

As I was repeating the loop I saw Susan’s boyfriend Erik and yelled, “How is Susan, where is she?!” She had just finished the bike and was about to hit the run course. I was relieved. She’s a killer for sure, but I sometimes feel like a triathlon sherpa, wanting to make sure all my friends make it.

As I finished I had tons of energy but was also thinking about my 3rd full Ironman (a 2015 race Doug and I had just signed up for) thinking, “Oh jeez, for real I am going to double this distance?!” 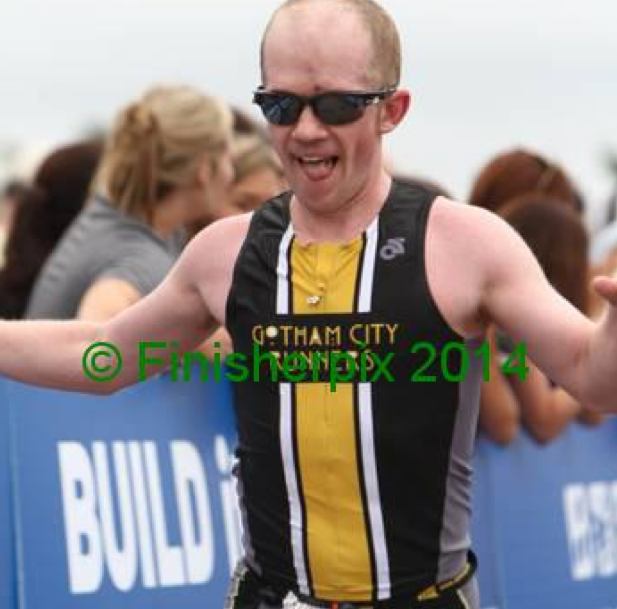 I was happy with my time, the slowest Half Ironman for me by 10-15 minutes. My A goal is to break 5 hours at some point. I sat down, took my sneaks off and ate a big plate of food, watching for my peeps. 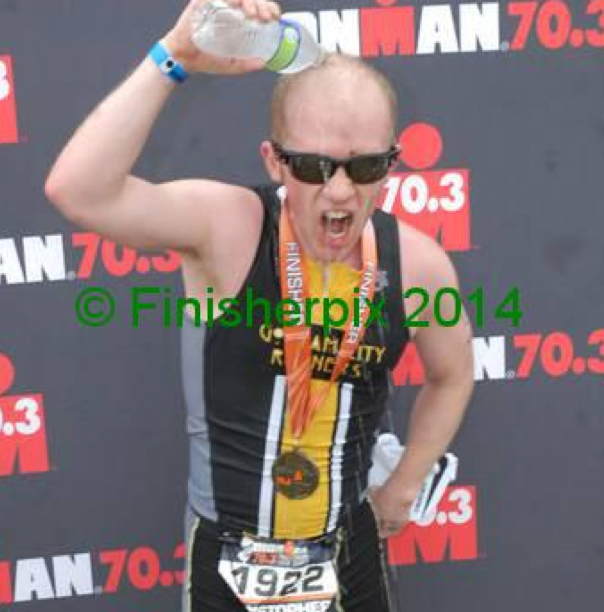 I eventually started walking around and found Doug. We decided (since we knew we had some time before our friends finished) to hit the beer tent. Sitting at a picnic table, talking about our individual races and older guy came up. “Mind if I sit here?” I replied, “Not at all man, jump in. How was your race?” He finished right after us and was 75 years old. We found out that he had done 12 Half Ironmans that year and had been to Kona 13 times. He started racing triathlon in 1978, the year it was invented and that Doug and I were born. He was our god. His name is Roger Little, look him up, he is no joke, further inspiring us. Thanks Roger.

We found Amy, Susan, Erik and Dave soon after. We relished in our victories. Joe, who slipped out, had the most to celebrate with a 49 minute PR. Joe, I owe you a drink.

We all parted ways soon after. Doug and I found ourselves a Kinsale Tavern with Abbe, Danika, Susan and Erik to celebrate.

It was a great end to the tri season.

I want to succeed, but now that I have athletes that I coach, I want to guide them more than anything. We had a hell of a day out there and I am so proud of all of the athletes in my battalion. I, personally, have had good races and bad races and I know that factors unknown are a component of that. You can fuel properly, and then have a bad night of sleep. You can sleep well, and then catch a cold. You can catch a cold the week before the race and kick it, only to run the fastest race you have ever raced. These are things you cannot plan, this is life. As an athlete all you can do is go out there and drop the hammer, giving it everything you have. Athletes I coach… friends, you set it off. Until we meet again in battle, congratulations.